Although I’ve never been much of a history buff (I think I have a very poor general knowledge when it comes to past events), the Ancient Romans and in particular the tragic story of Pompeii has always fascinated me. The way they lived, their amazing architecture and their ability to create things more futuristic than their means has always been a point of interest to me – and probably the only topic in our history lessons I actually felt I got something from.

The Ancient city of Pompeii was home to a 40,000 strong roman civilisation in 79AD (I don’t have much of a concept of when this is, if I’m honest – just a very long time ago) when suddenly, one evening in August Vesuvius – the innocent looking volcano (or mountain, as it appears) that towered over the buildings – erupted. It destroyed the city, as you can imagine, as well as burying the buildings under a layer of 4-6metres (20 foot) of ash. The place lay largely forgotten for 1,500 years, with later civilisations building their towns around old Pompeii (without knowing it was there) before it was discovered in the 1700’s. As an excavation began, engineers began to see the city – as it was on that fateful day – emerging almost exactly as before.  A lack of air and moisture beneath the ash meant that the buildings, pottery, houses and even people, were preserved.

Today, the site has almost been completely excavated and is a bit of a tourist hub around the world. At all times of the year, it seems to be swarming with people eager to catch a glimpse of the only real evidence we have of a roman civilisation.

It’s always been somewhere that I’ve been intrigued to visit and so when Sion and I were passing through on our way back to Naples, we thought it would be a shame to miss out. Situated around half an hour by train away from Sorrento and about an hour from Naples, it’s a much larger place than I realised and so if you can withstand the heat (we only managed a couple of hours), it’s worth devoting an entire day to exploring. 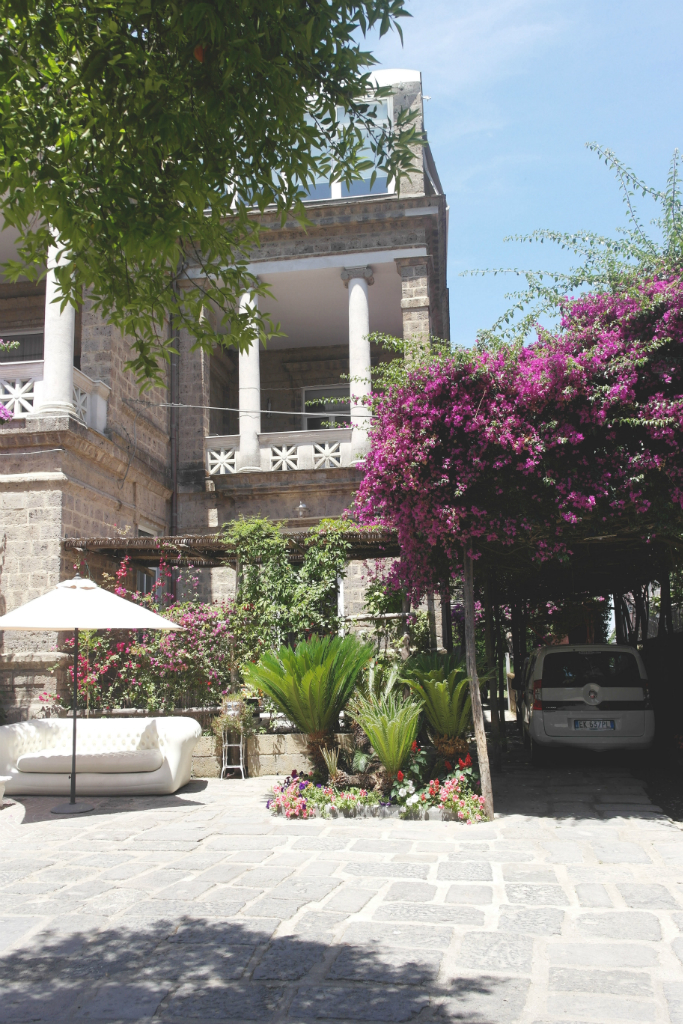 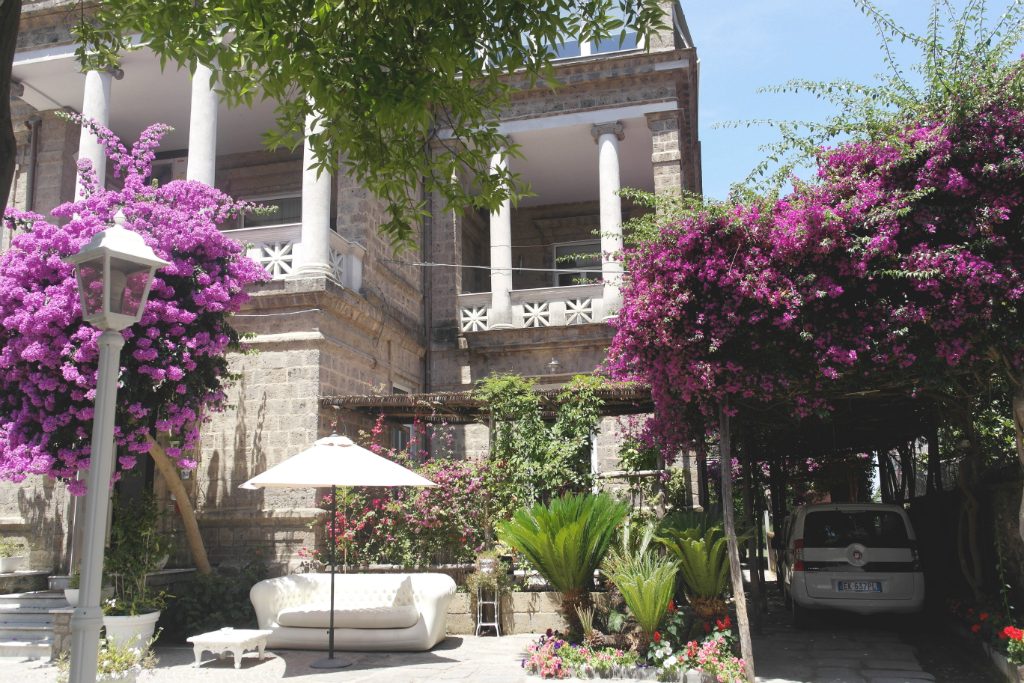 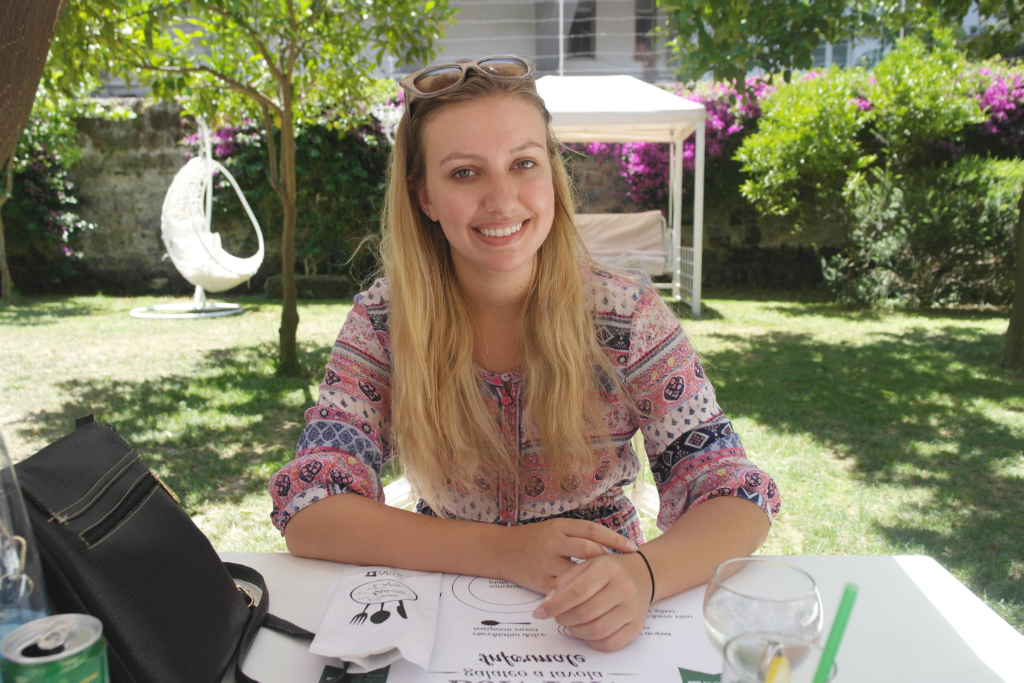 Due to the area being a tourist trap – and us having a tight budget – we wanted to make sure we got the most out of Pompeii without spending a fortune, so before setting off – we found a place to eat in Sorrento, fuelling for the day ahead in the most cost effective way possible. The restaurant we found actually turned out to be such a beautiful place, with some amazing floral displays and a stunning garden. The food was okay, but extremely good value for money – 20 euros for the two of us and large portions all round! My pizza probably doesn’t look like the most appealing (I do have a tendency to choose weird toppings) but it was delicious all the same! 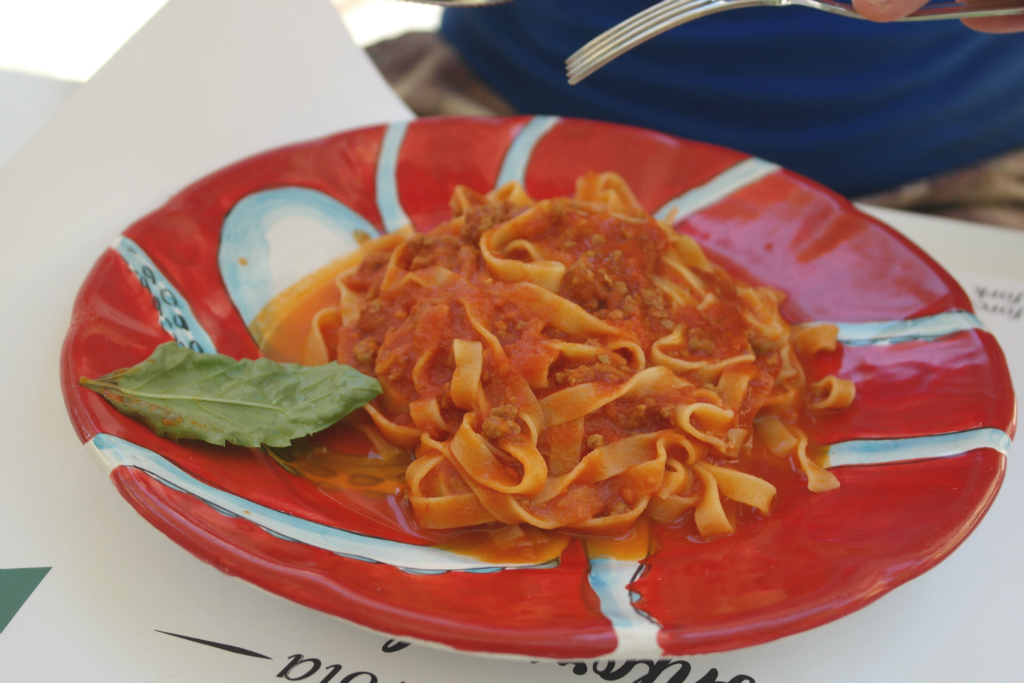 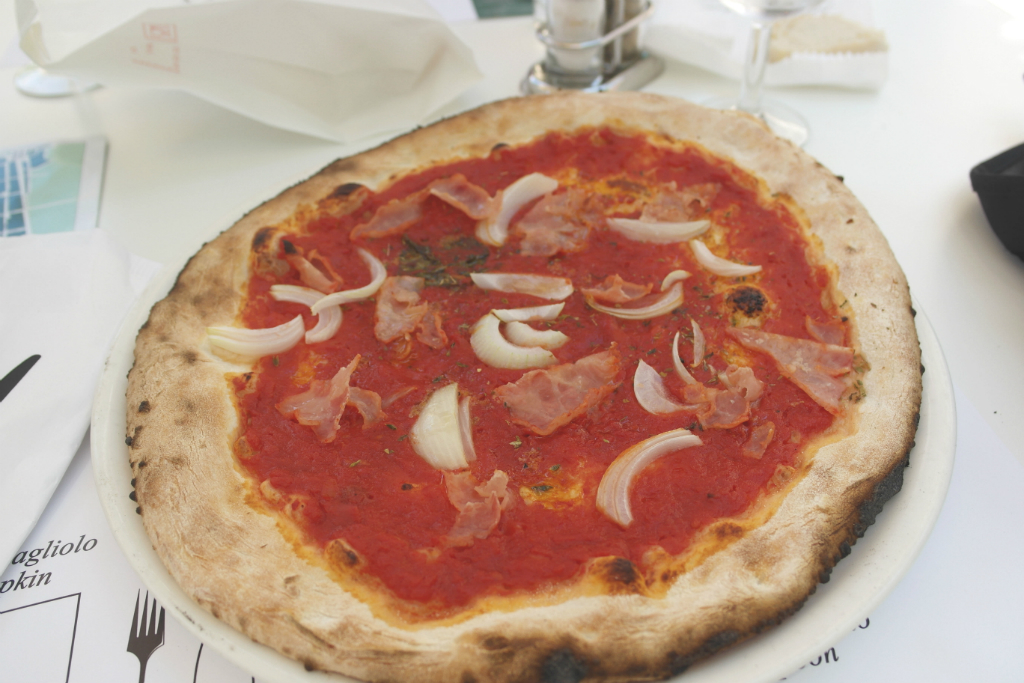 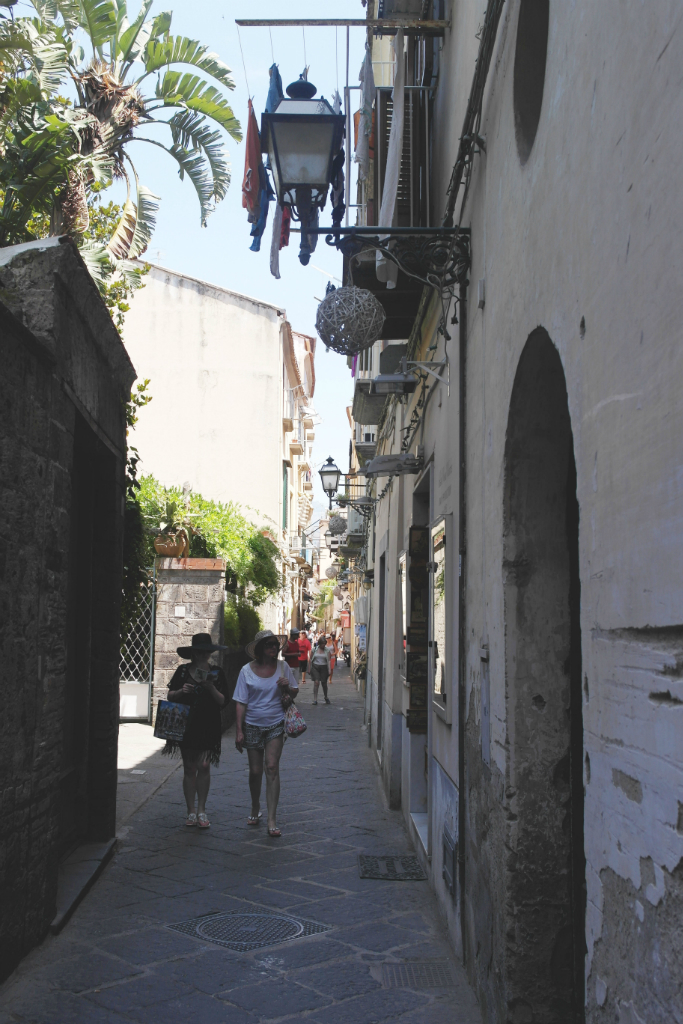 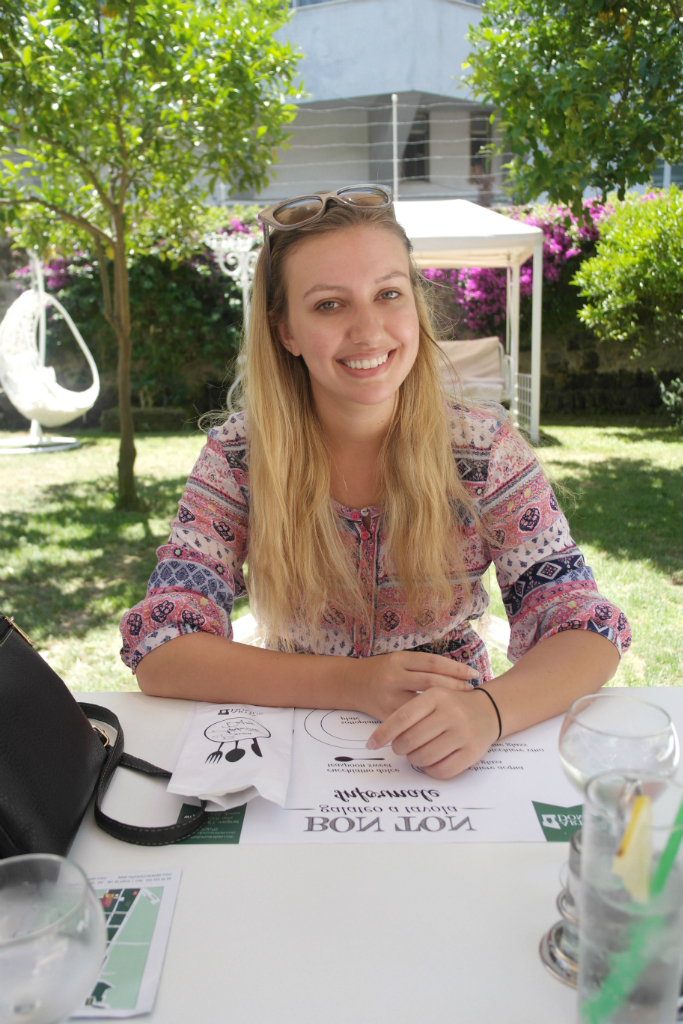 With fuel for the afternoon, we made for Sorrento’s train station, which is actually quite a short walk from the main square. We purchased two tickets to Pompeii (2 euros each) and found two seats. Since we had our luggage with us (as we were heading back to Naples afterwards), it was a bit of a tight squeeze but no-where near the sickeningly hot and muggy train journey we experienced on our second day! 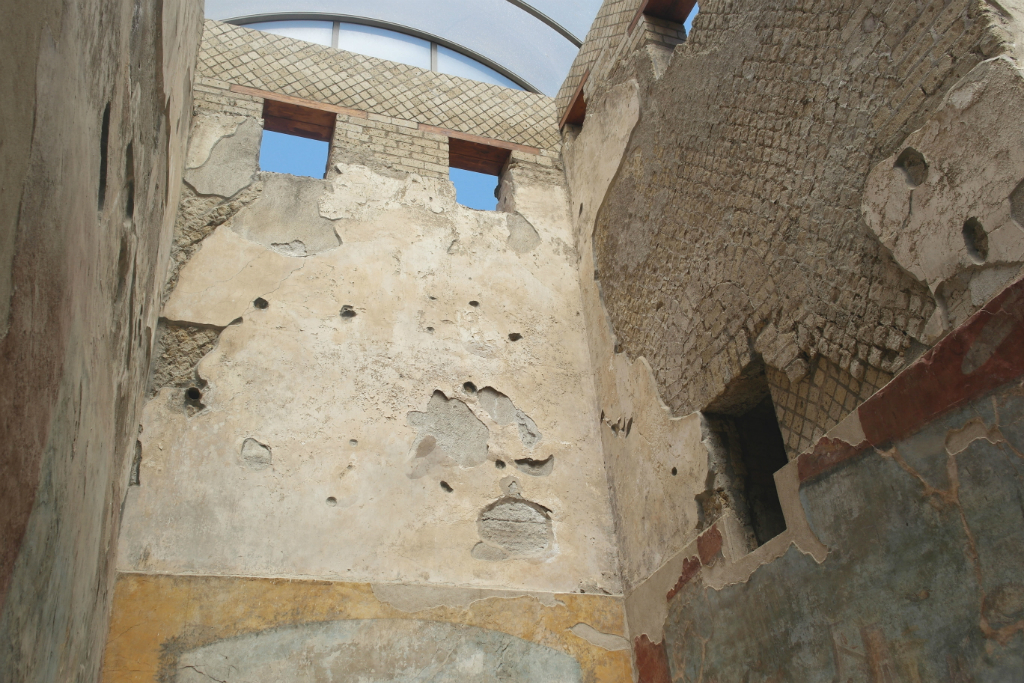 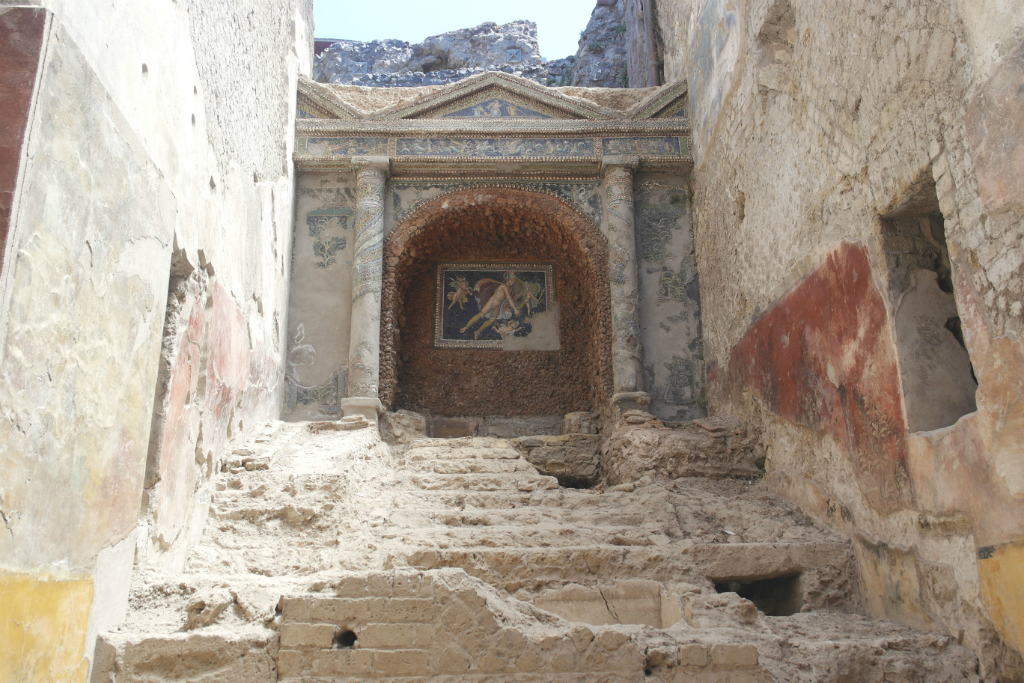 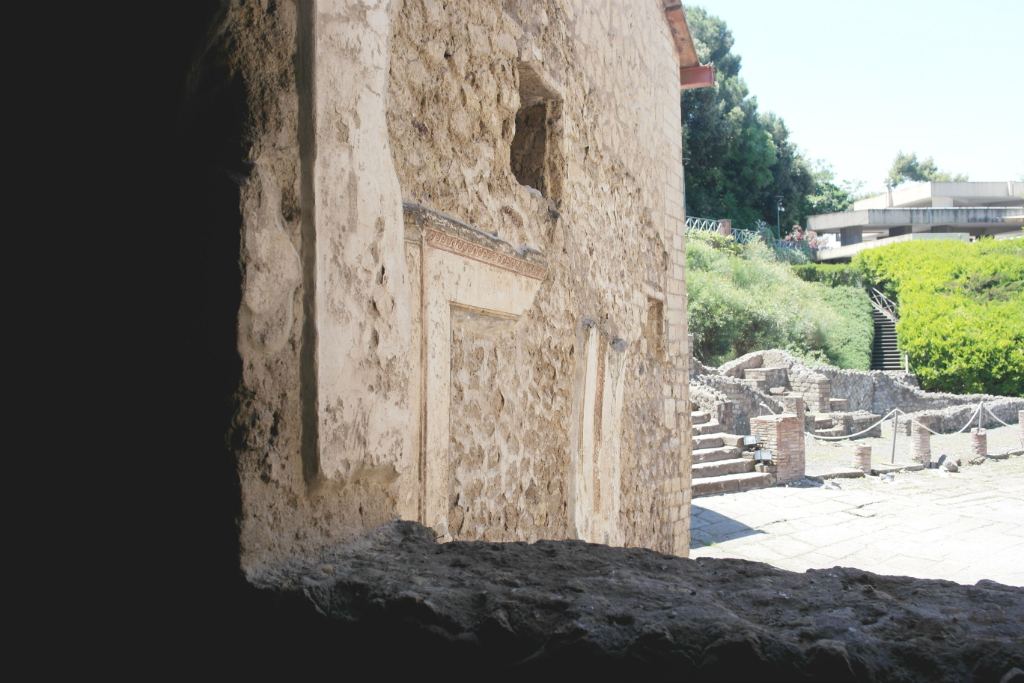 A short while later, we arrived in Pompeii and paid 6 euros to leave our suitcases at a holding area at the station. As soon as you get out of the doors and walk up to the Ancient Ruins entrance, you are bombarded with people trying to sell you tours, guidebooks and food – which many tourists were taking up the offer of, however we wanted to explore in the most cost effective way possible, so although I did think a personal tour guide would have been brilliant in terms of learning more about the area, it was actually really nice to explore things at our own pace without having to keep up with a large group. 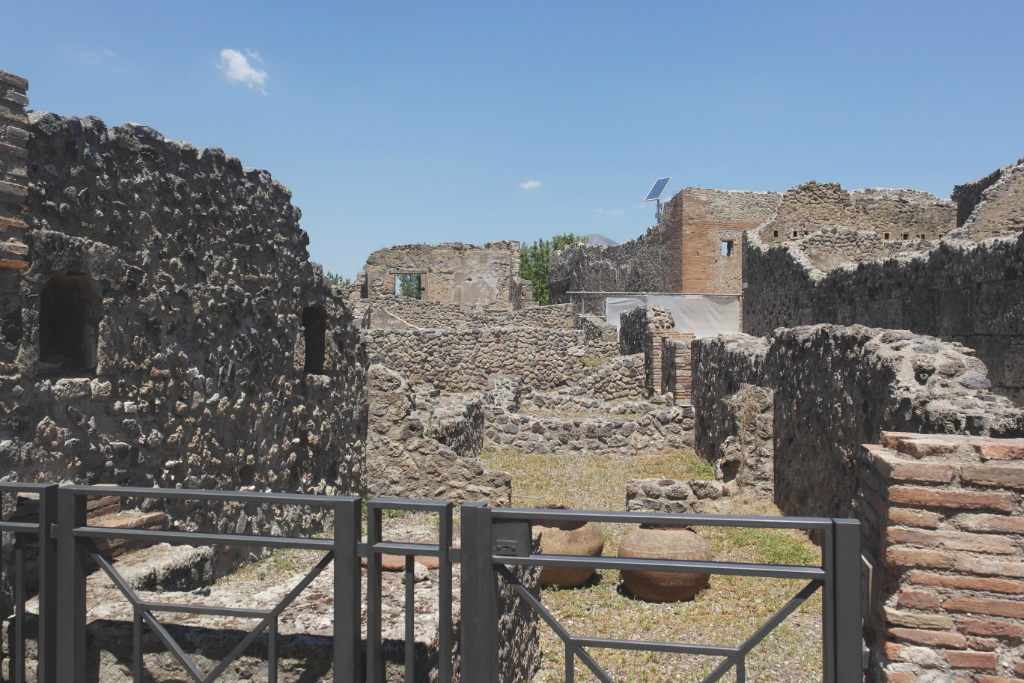 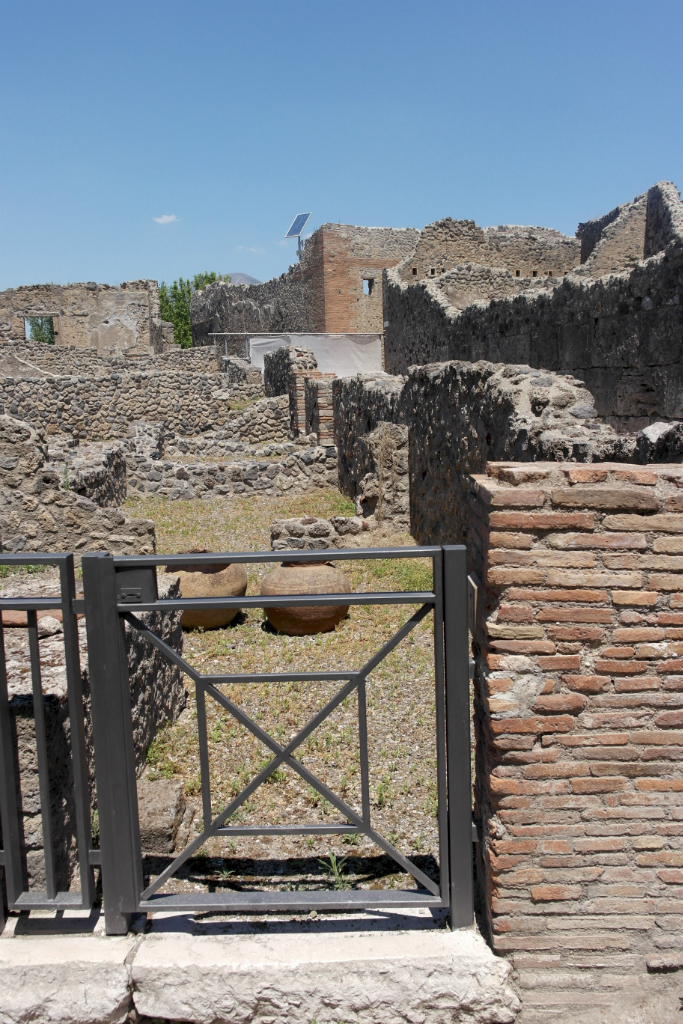 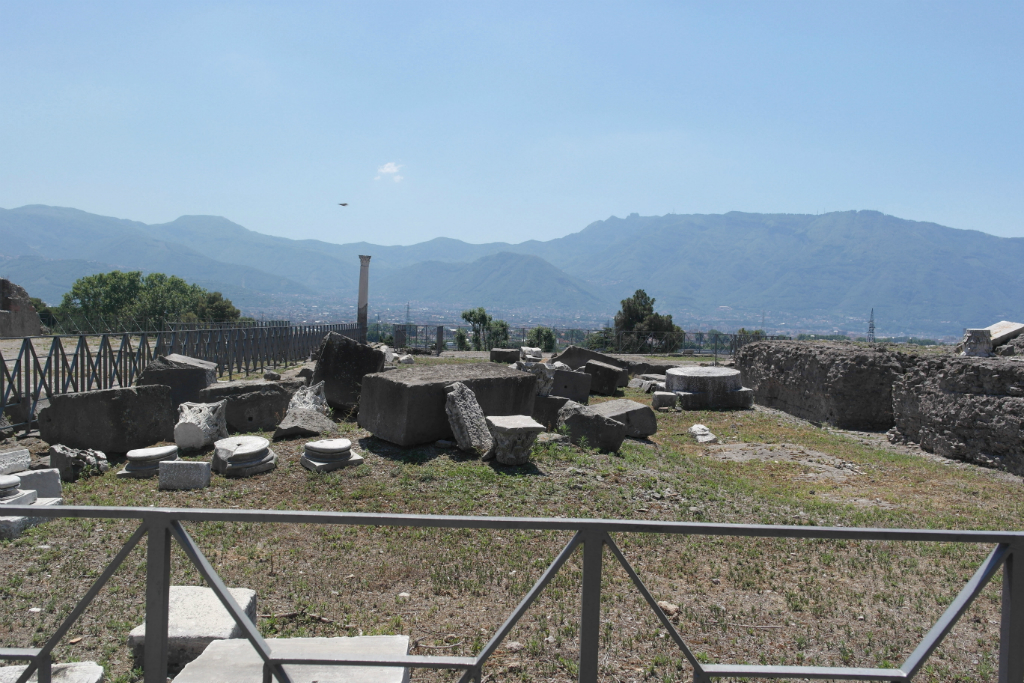 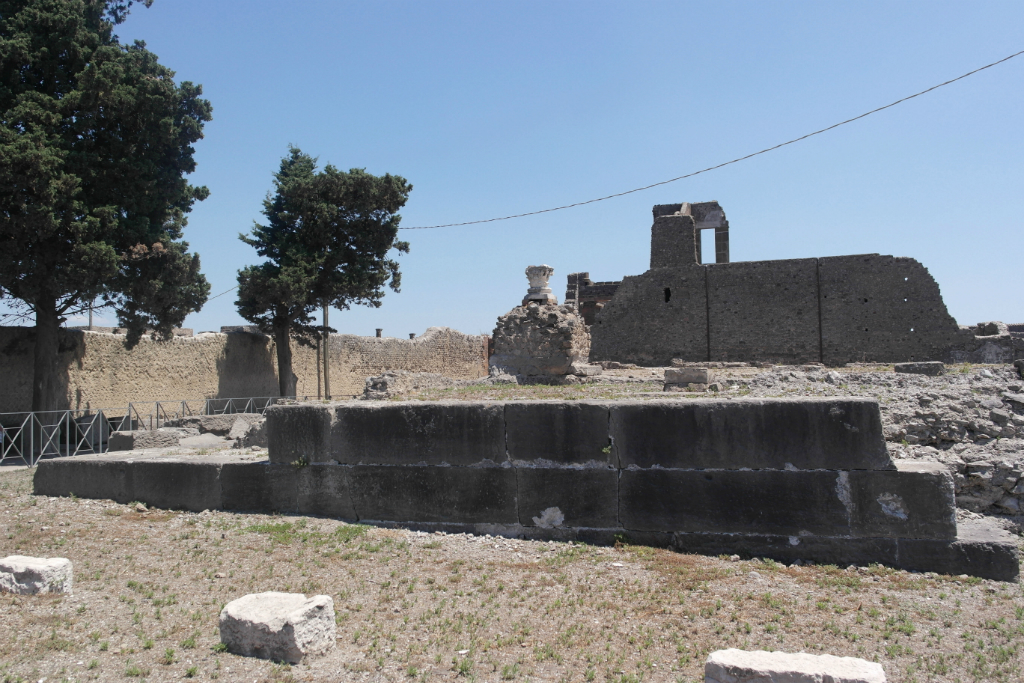 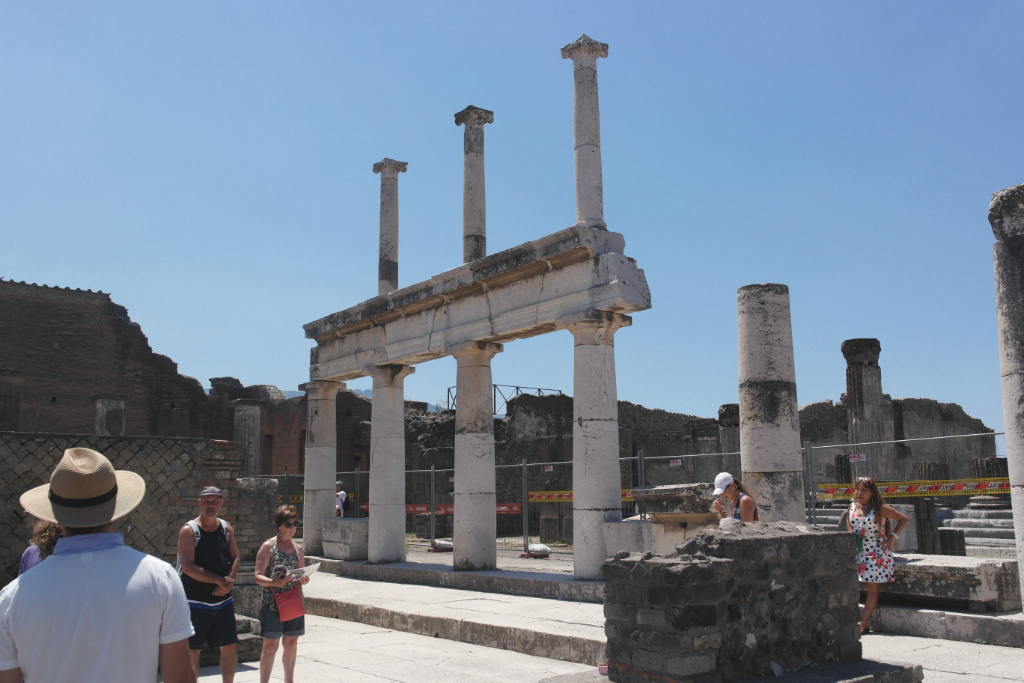 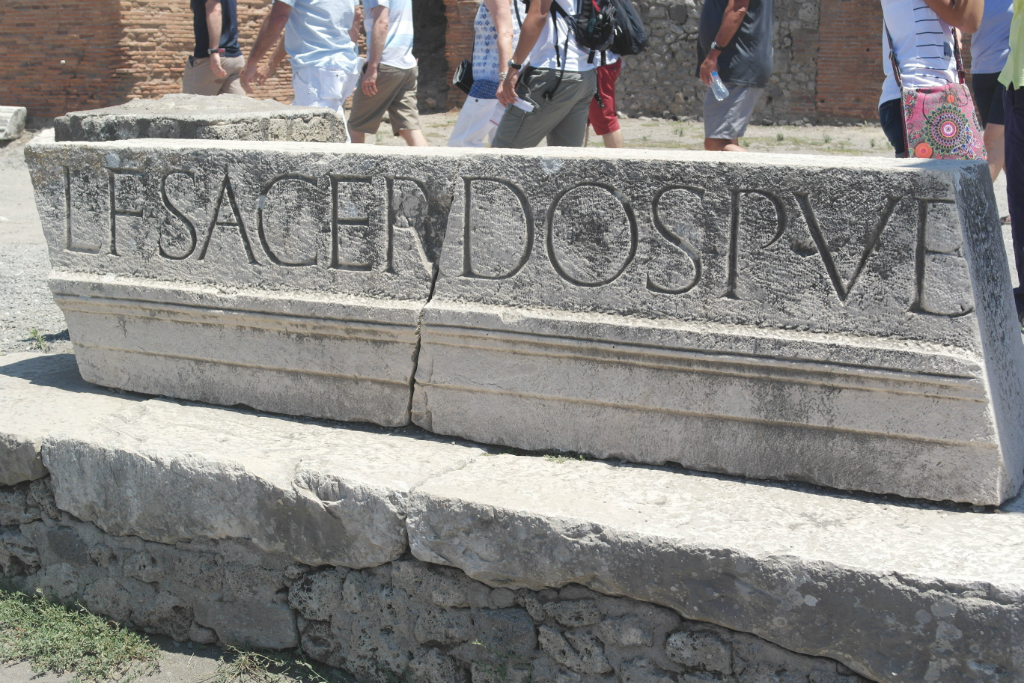 Entry was 16 euros for the two of us, less than we were expecting. It’s worth letting them know if you’re under 25 or a student, as they base their prices on age and actually gave us quite a significant discount. Since we weren’t getting the benefit of a tour guide, we also purchased one audio guide to share – which turned out to be pretty useless, all it seemed to do was play ‘roman’ music and describe what we could see, rather than any kind of history, background or contextual information. Plus, it was really difficult to tap in the correct ‘number’ to correlate to where we were, because no-where actually had any signs telling us.

Saying that, we managed to glean from other tour guides some interesting facts about the area – as well as venturing off ourselves to explore. 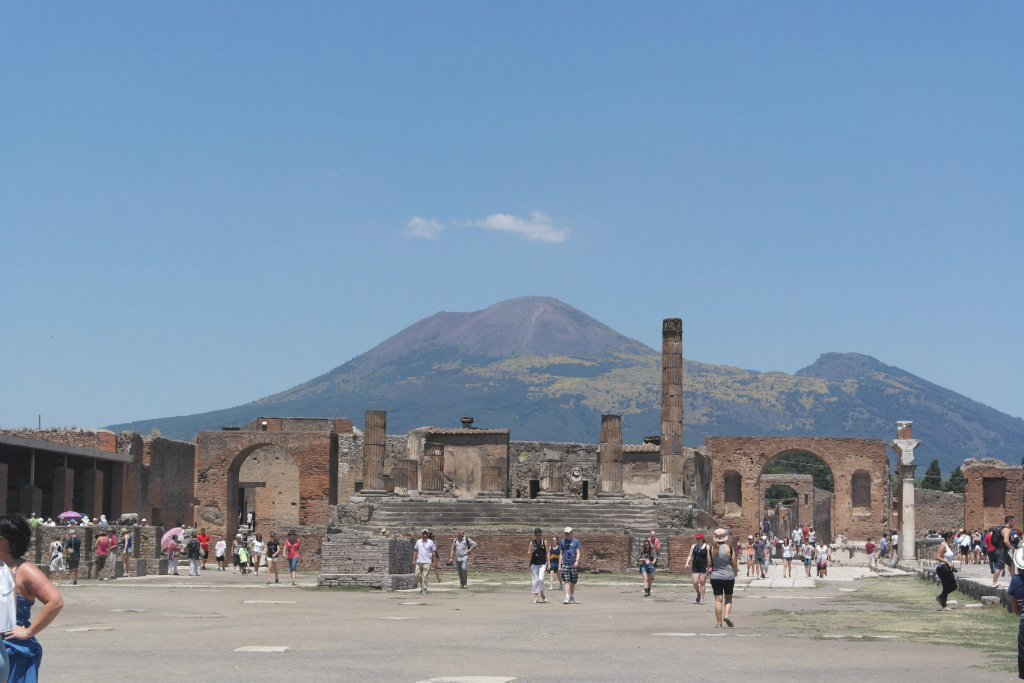 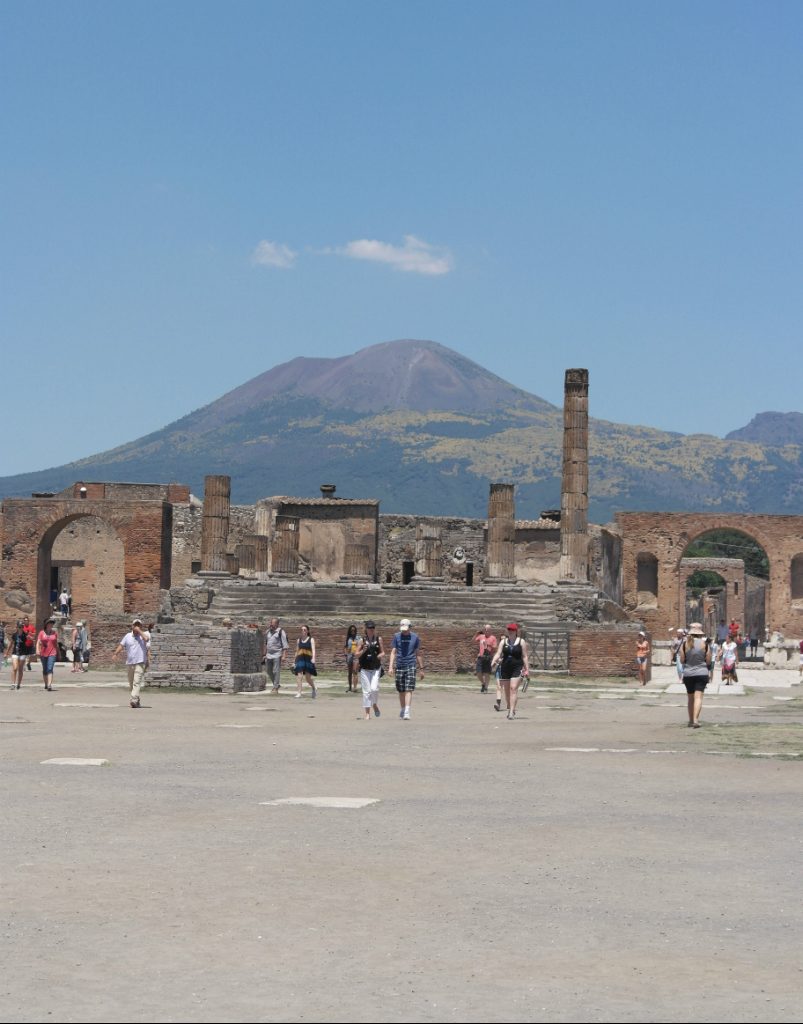 That looming ‘mountain’ in the background is the infamous Vesuvius – it looks rather innocent, however it’s still a live volcano and scientists have claimed it is due another huge eruption! 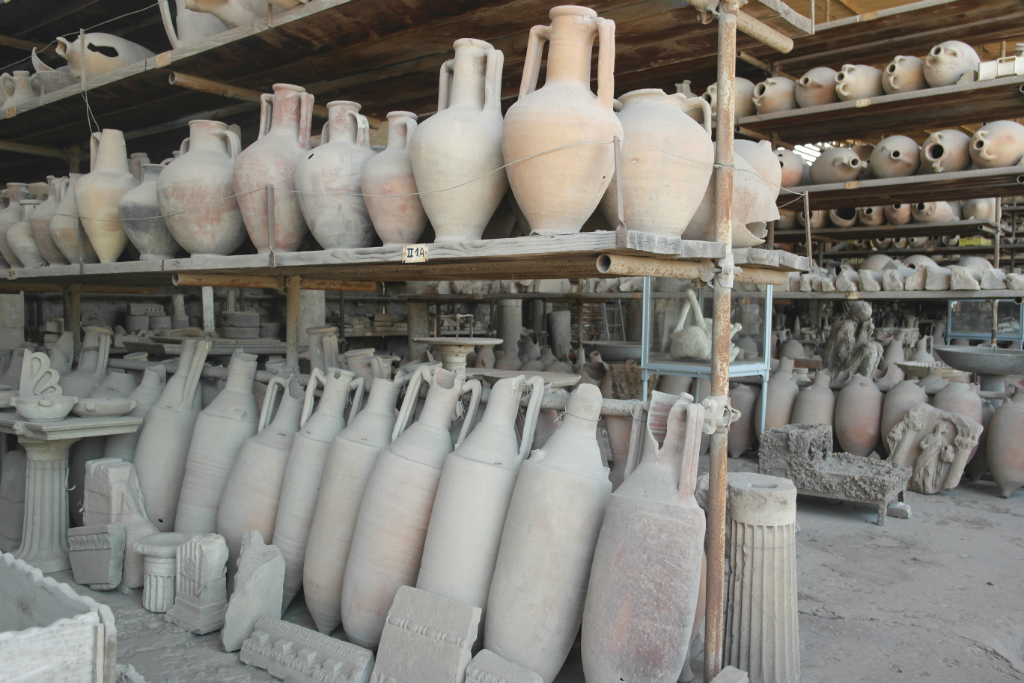 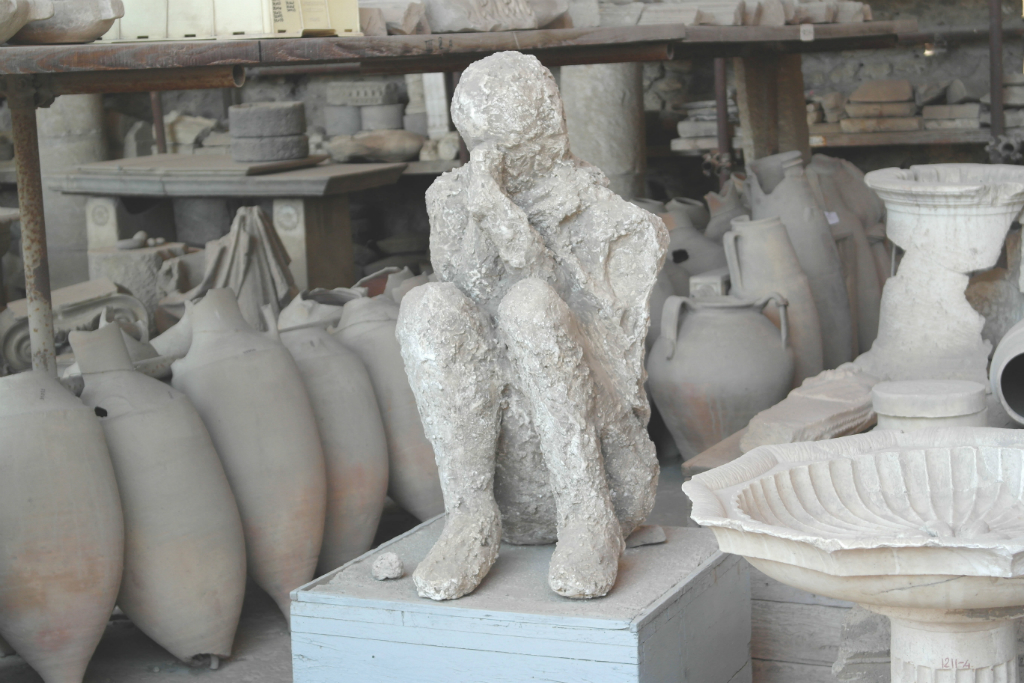 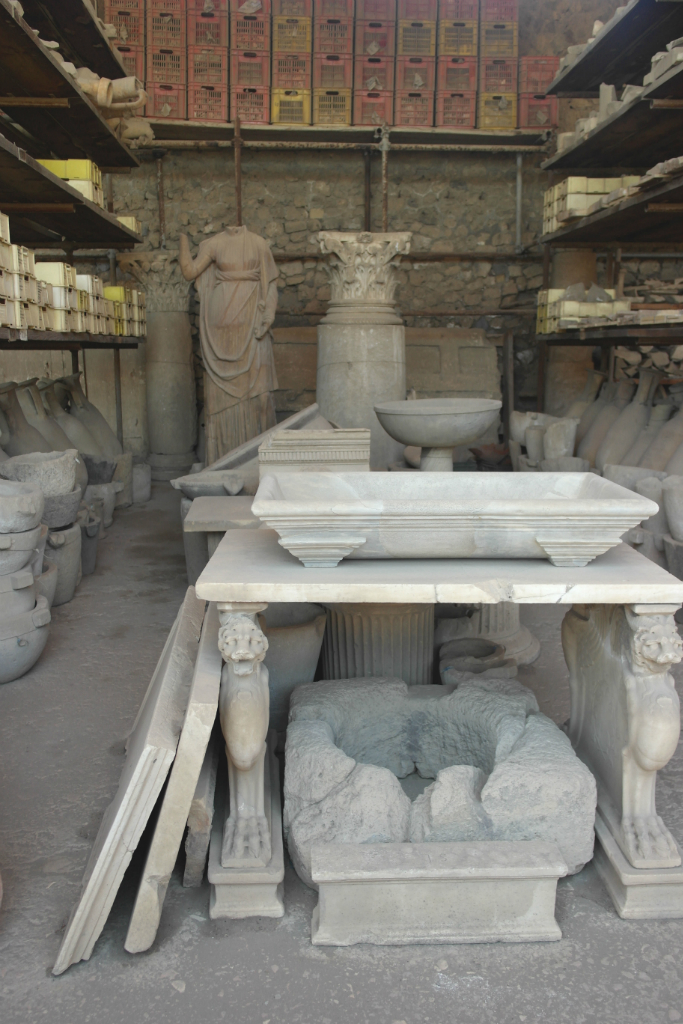 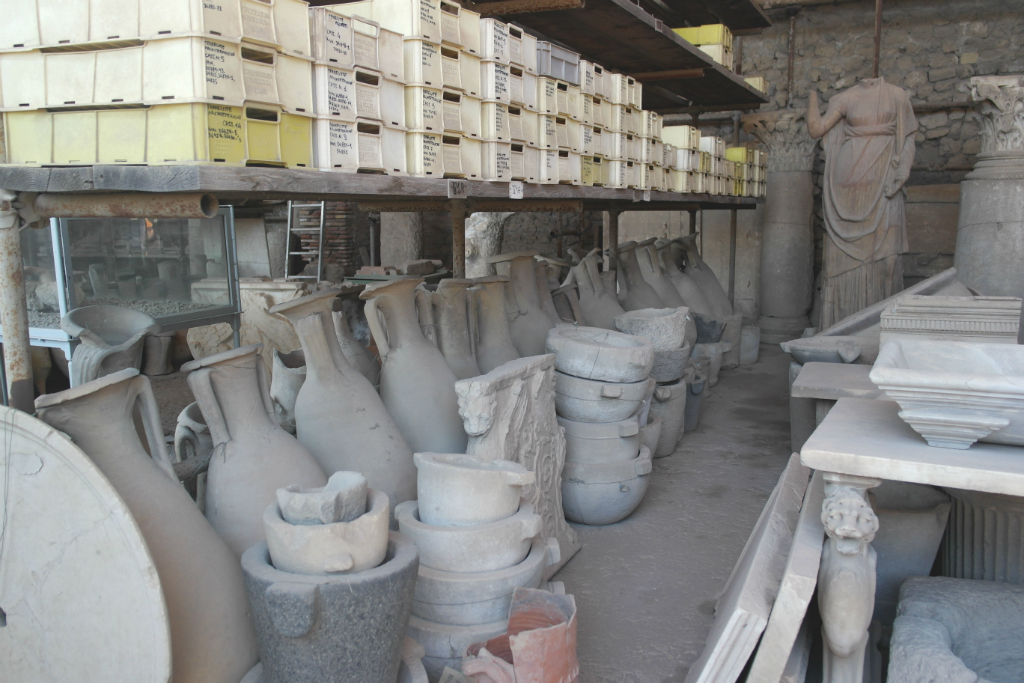 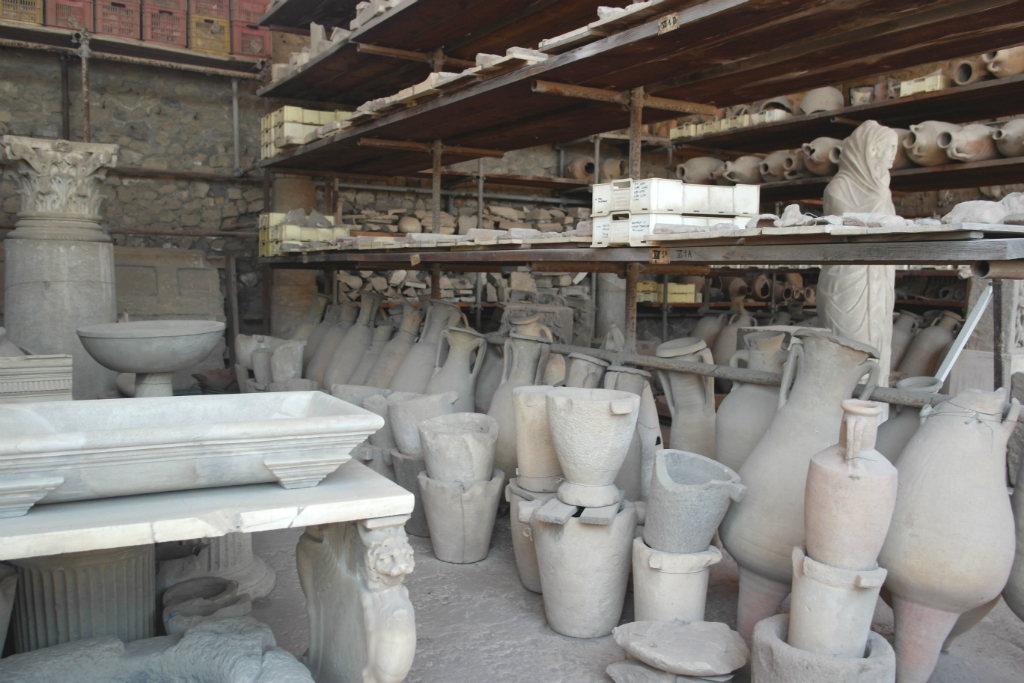 The pottery and artefacts they found are incredible – the detailing of the sculptures is incomprehensible! Another poignant display are the renowned plaster casts of the people who were killed by the natural disaster, their last moments captured by volcanic ash which solidified and retained their positions. 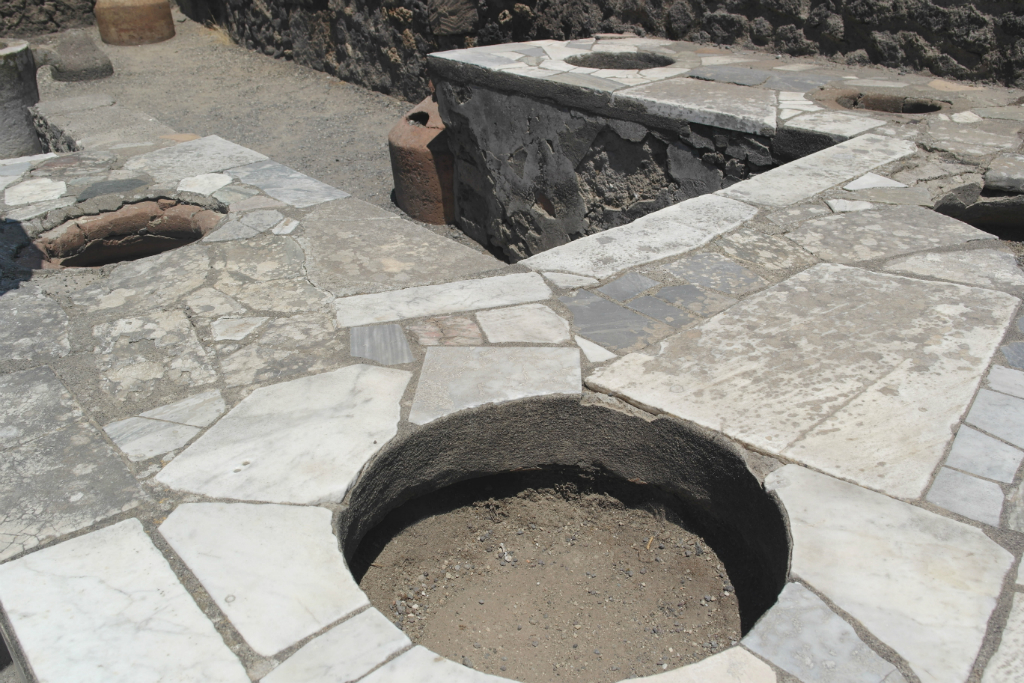 Although this looks like some sort of communal toilet, it’s actually a restaurant. Terracotta pots would be slotted into the holes and food served from them. 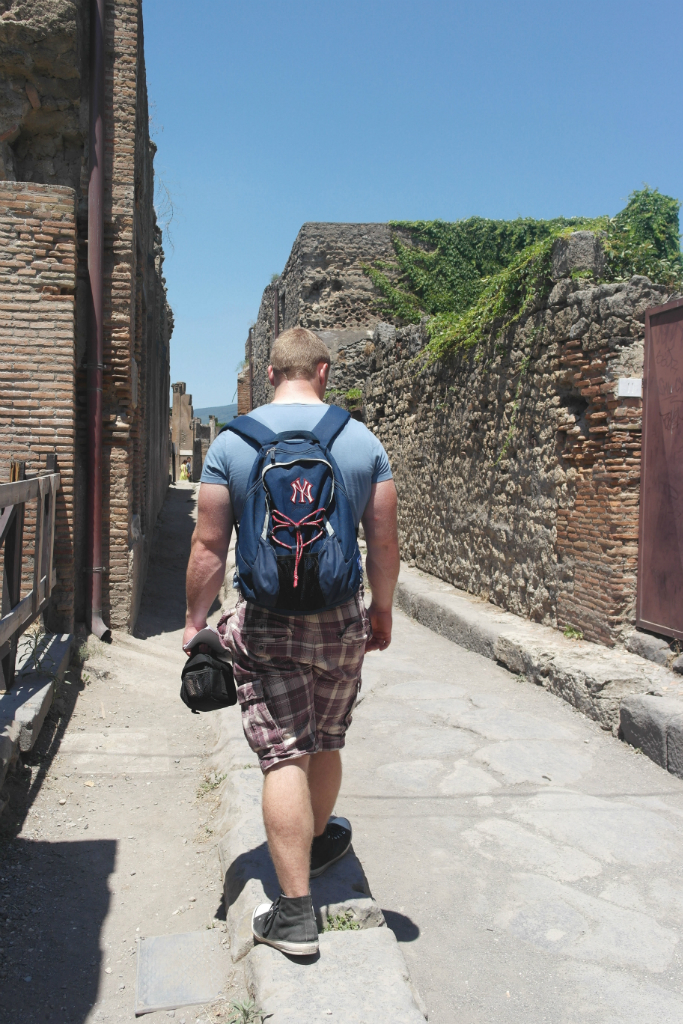 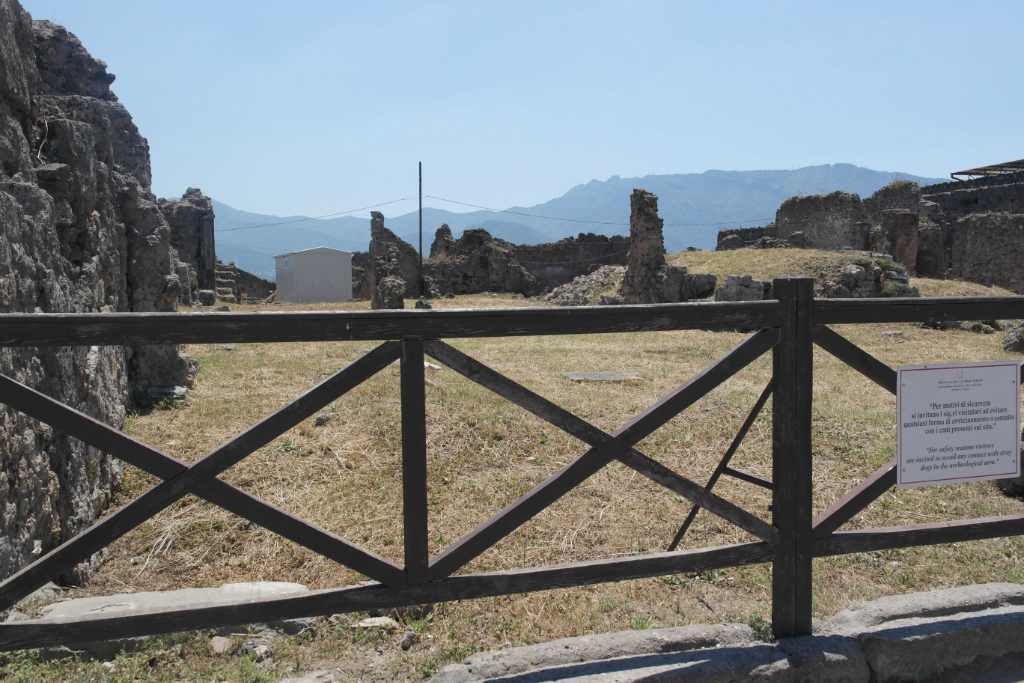 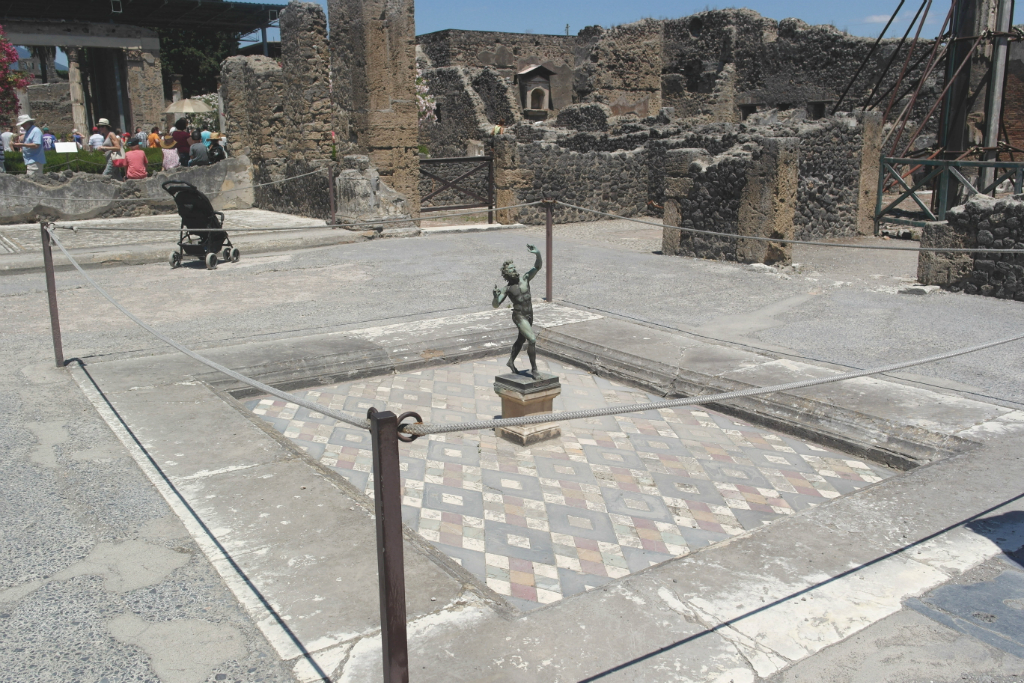 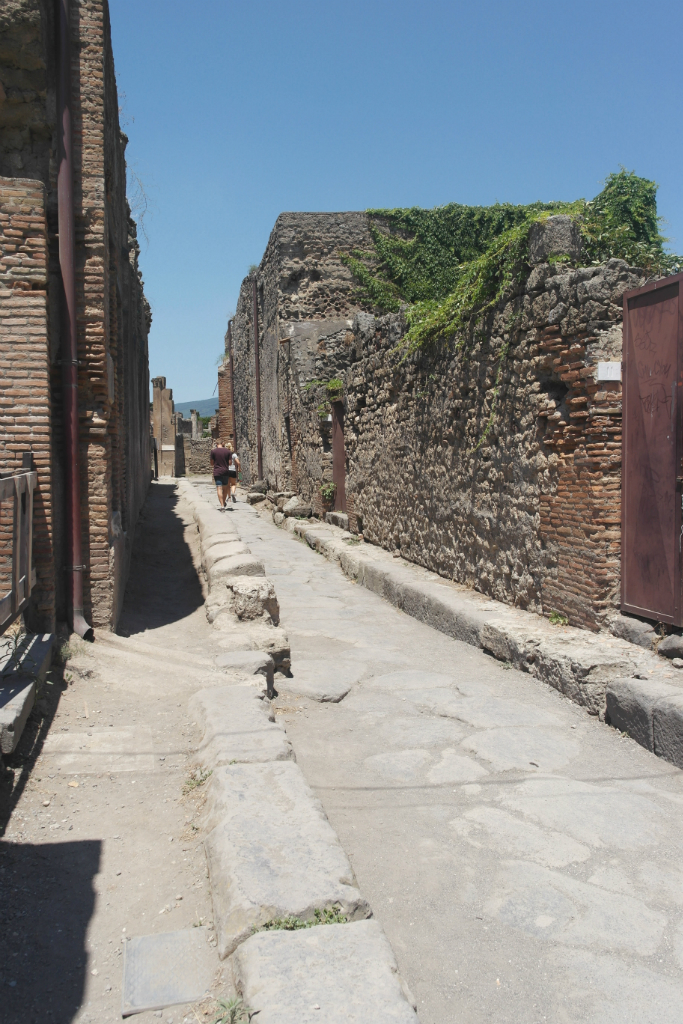 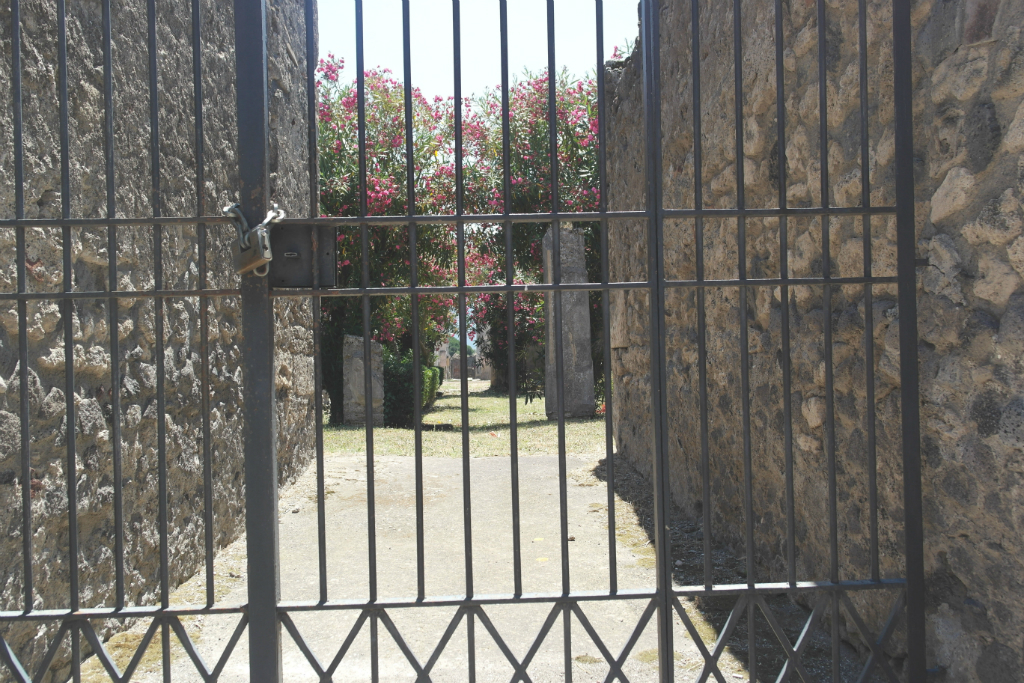 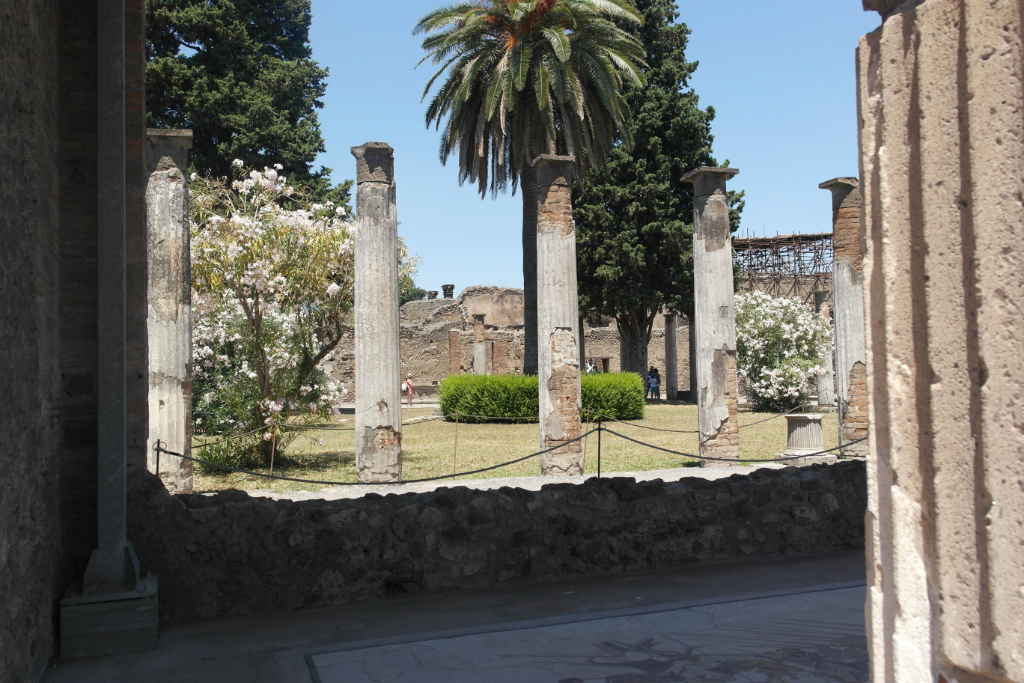 After exploring for another hour or so, we were eventually beaten by the scorching heat – which we couldn’t physically walk around in any longer. We decided to take the train back to Naples and settle back into our hotel for the night (which you can read a full review on here).

With just one day left of our Italian adventure (I didn’t blog all of them but we were there for 7 days), we wanted a good nights sleep for yet more exploring so we skipped dinner and fell straight into bed!

Have you been to the Ancient Pompeii ruins – what did you think?