After a beautiful first day (you can catch up on that here), we had high hopes for our second day in Sorrento – which began with an incredible breakfast spread, (which you may have seen on my Instagram) piled high with the most amazing pastries, cakes and tarts. Unfortunately, being dairy-free and gluten-free has meant that all of the above are now completely out of my remit however I did enjoy admiring them and snapping away (not quite as good as eating them, but I made do).

The morning was spent lazing by the pool and topping up our tans before hunger struck and we decided to wander down a road we hadn’t yet ventured to – in a bid to find a cafe overlooking the sea (which admittedly, despite the incredible location – was harder to find than we thought). Eventually, we stumbled upon the rather oddly named ‘Foreigners Cafe’ which was aptly filled with Brits and Americans. A gorgeous view and the friendly waiters were tainted slightly by the fact the food was hideously overpriced and terrible. But hey, that’s what you get for going to a cafe named after the tourists! 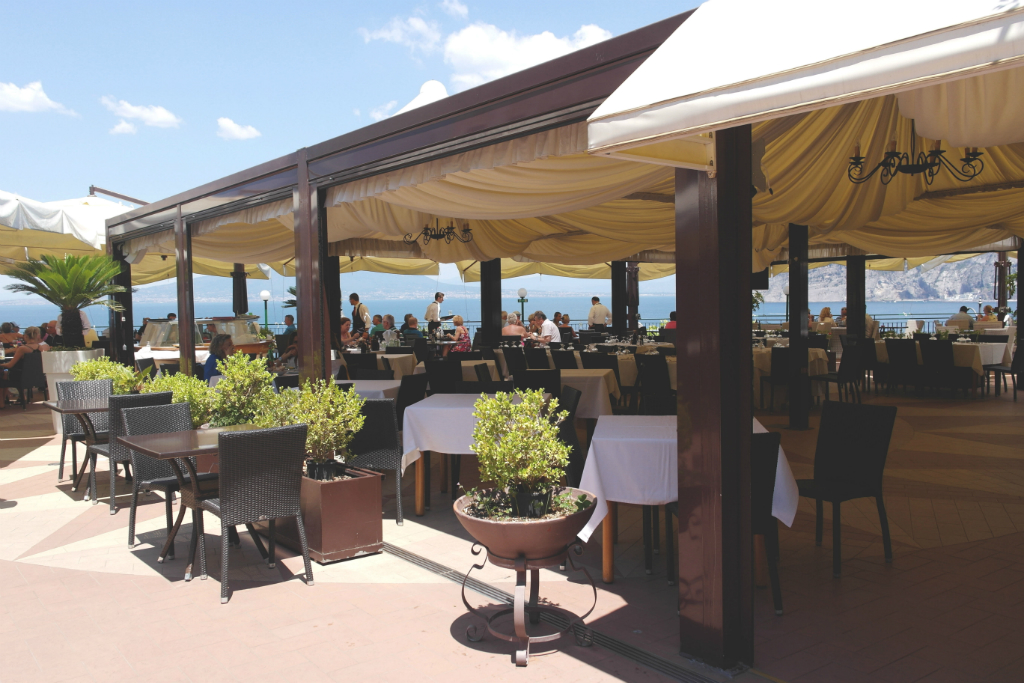 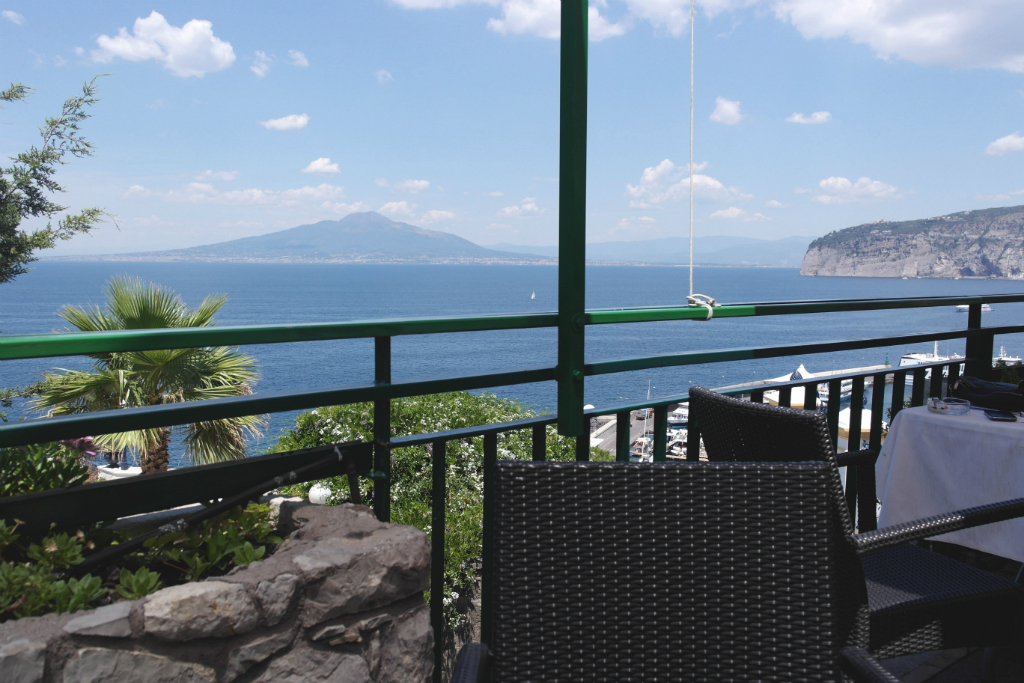 I asked for chicken with fresh pomodoro sauce and chips, while Sion opted for chicken, mushrooms and a creamy sauce. While were both edible, it wasn’t anything to write home about unfortunately. 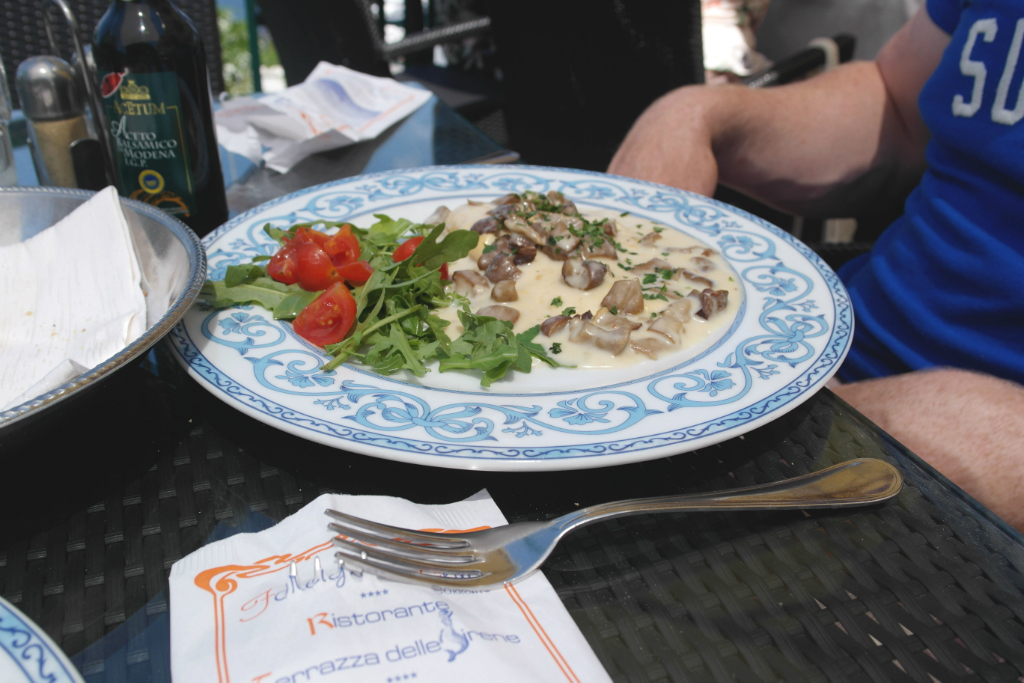 Inspired by the incredible views, we strolled down to the marina harbouring all the ferries and yachts (not the Marina Grande though, as stated in the title of this post – that one comes later) and bought gelato. I’m actually holding Sion’s in this picture (nutella ice-cream) as I opted for a far less creamy and slightly less appetising lemon granita (a kind of sorbet/slush drink). We saw into the afternoon watching as boats drew into the harbour and unloaded their passengers before setting off again on another journey. 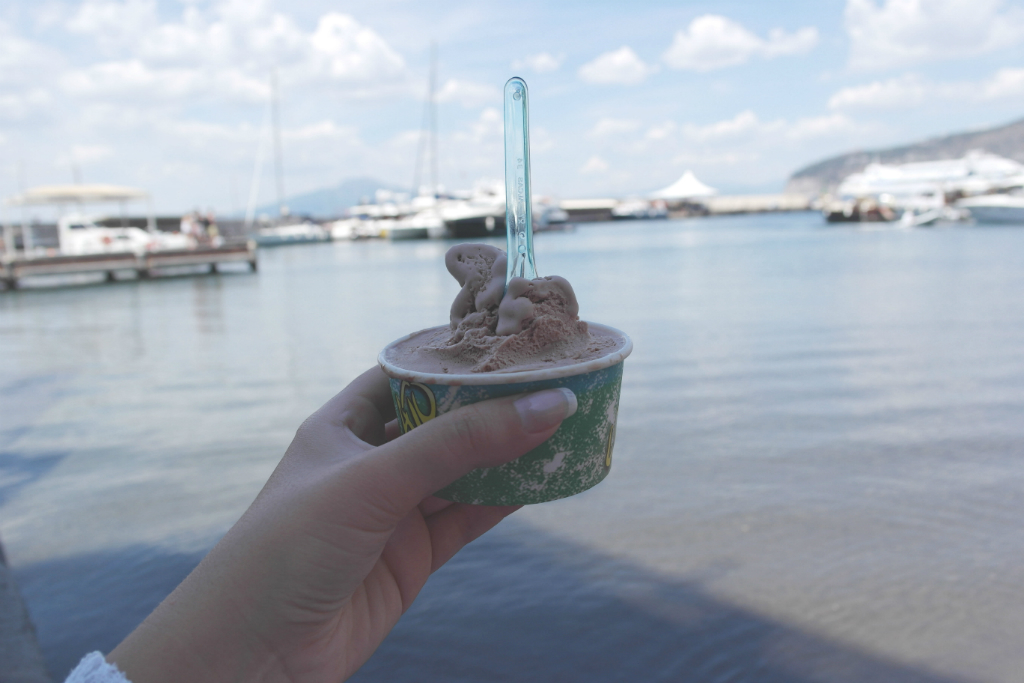 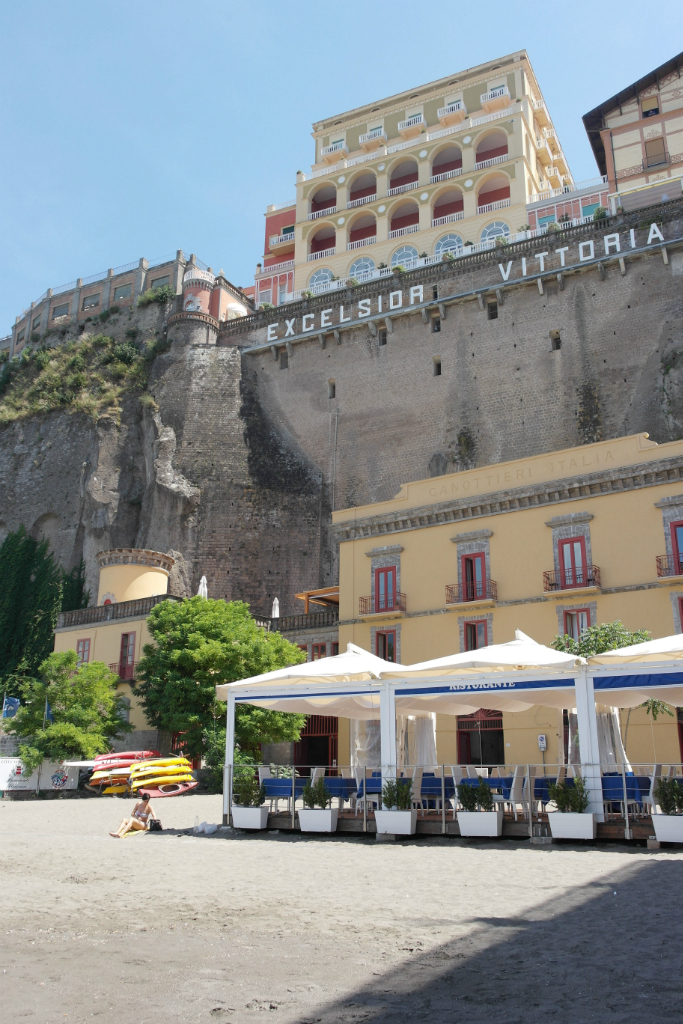 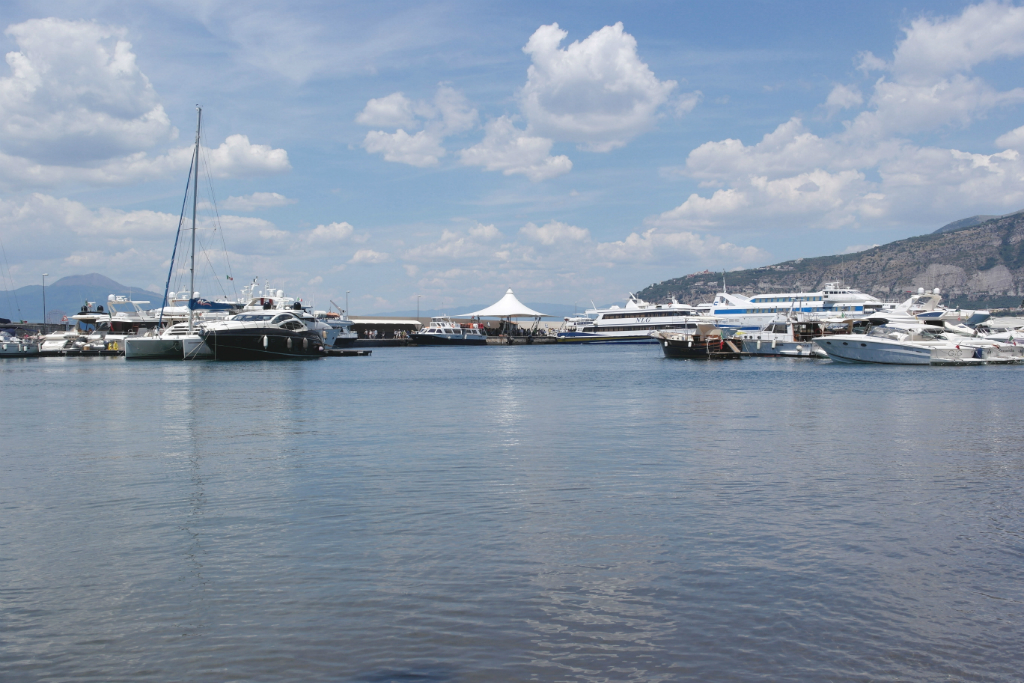 Once back at the hotel, I started to research places to eat in Sorrento – as I wanted to make sure we went somewhere special and weren’t missing out on a gorgeous spot. I actually found the best information on TripAdvisor, which I normally hate using – as it can be filled with primarily very bitter reviews – however a general consensus among users was that the Marina Grande and a restaurant called Delfino’s was the best place to see the ‘real’ and very romantic Sorrento.

Without a booking in place (which it advised), we decided to get ready for dinner and set off early in order to hopefully bag a table before the place started filling up. Since it was somewhere fancier than our usual last-minute restaurant scour, I decided to wear my new Missguided dress – which is very similar to the one I was wearing here – just with a different pattern. It looks a little more flattering in person than it does in pictures, as I know it can appear a bit sack like here – but when you’ve had a carb-heavy meal, wearing a sack-shaped dress actually sounds very appealing! 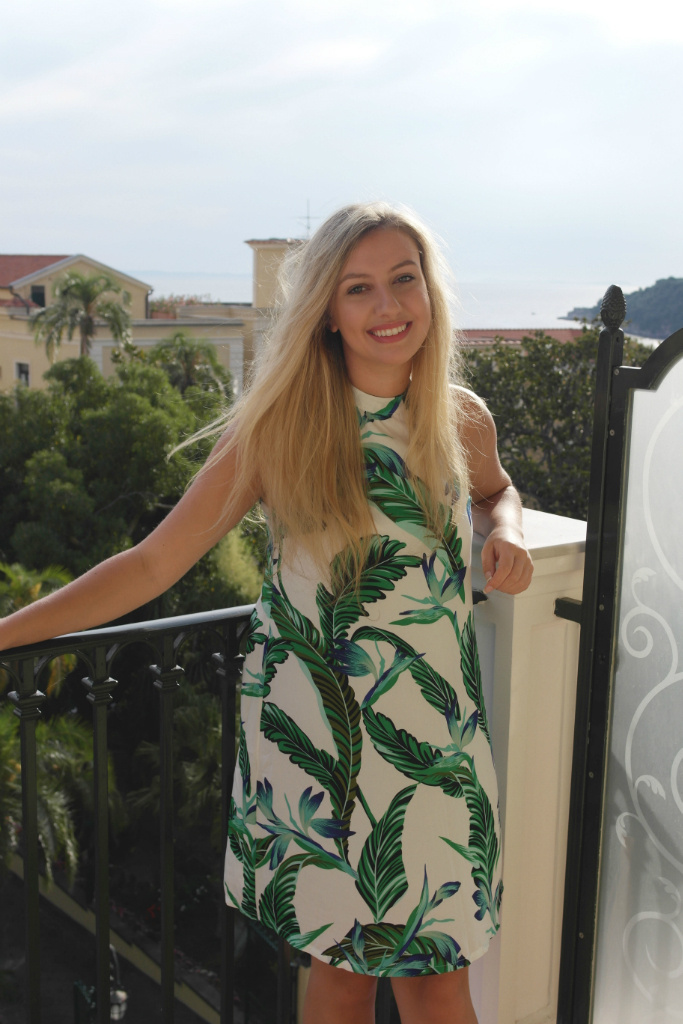 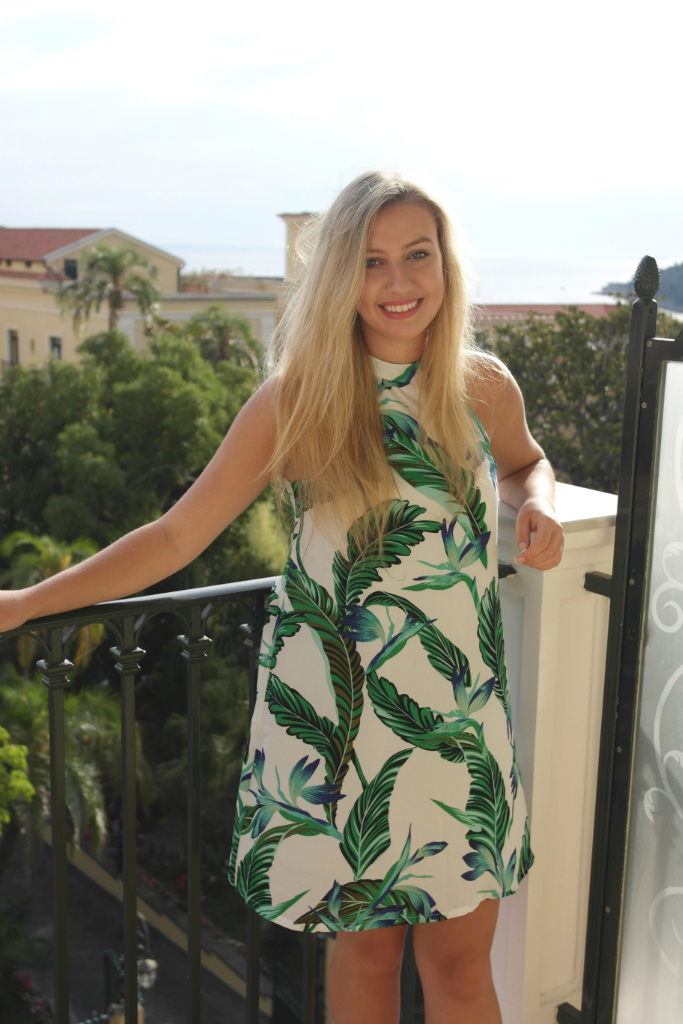 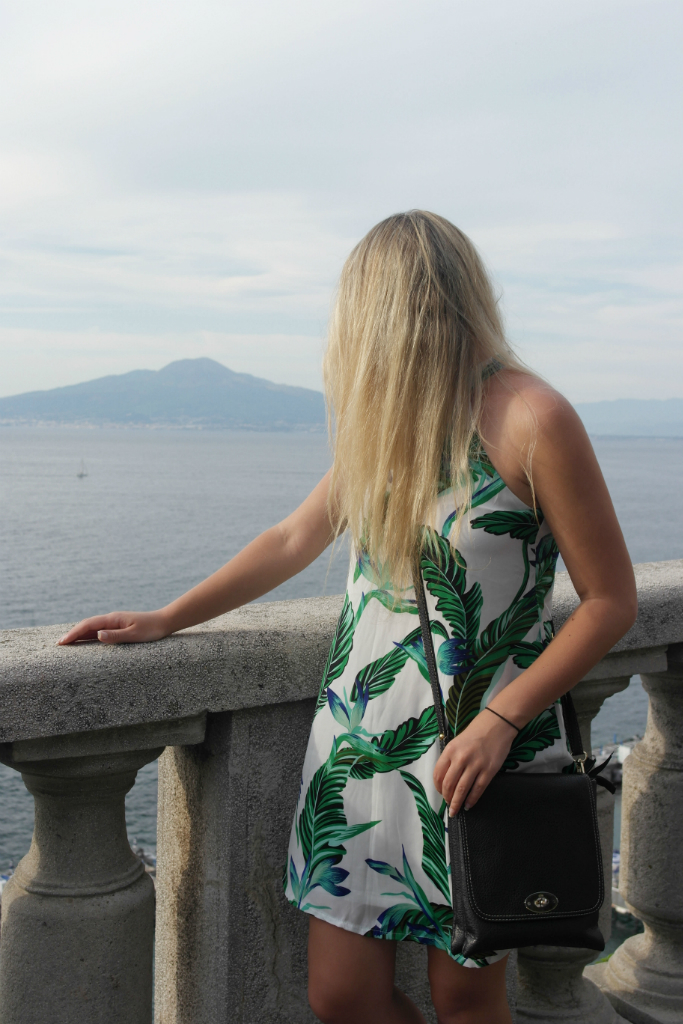 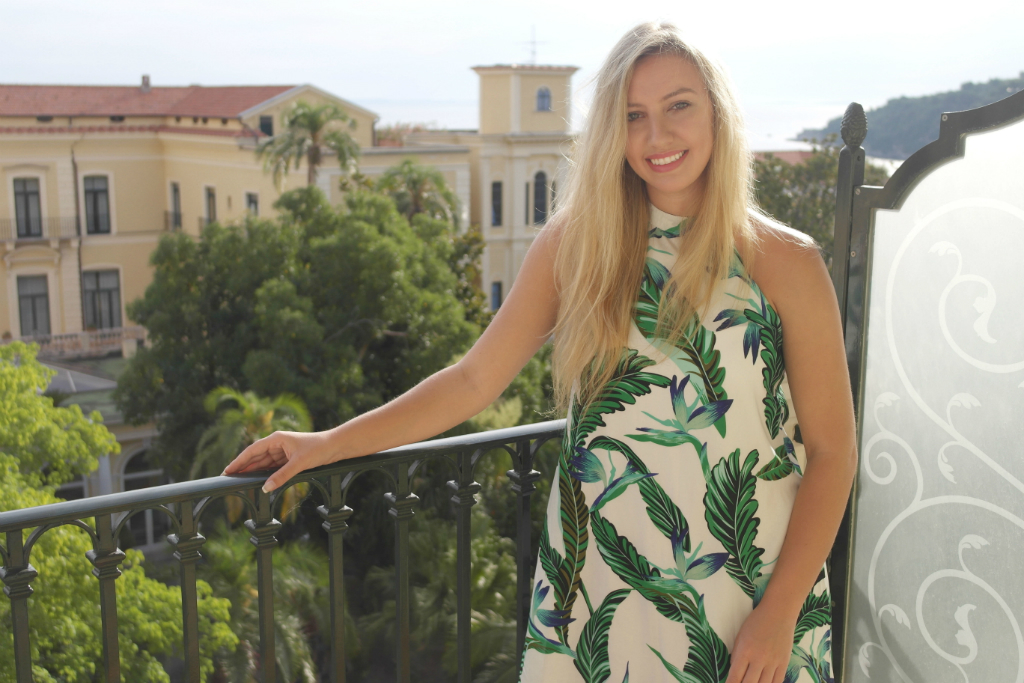 After another obligatory photoshoot (sorry Sion), we strolled down in the direction of the Marina Grande – and as soon as we approached it, were blown away. Despite the name suggests, the area is actually quite small and quaint, more of a traditional fisherman’s marina than anything ‘grande’ but we absolutely loved it. This was the real Italy we’d been hoping to see!

We took several moments taking in the beautiful views. It was honestly one of the most stunning places I’d ever visited. The colours of the buildings, boats and the sea looked like they’d already been through an Instagram filter. We almost didn’t want to tear ourselves away. 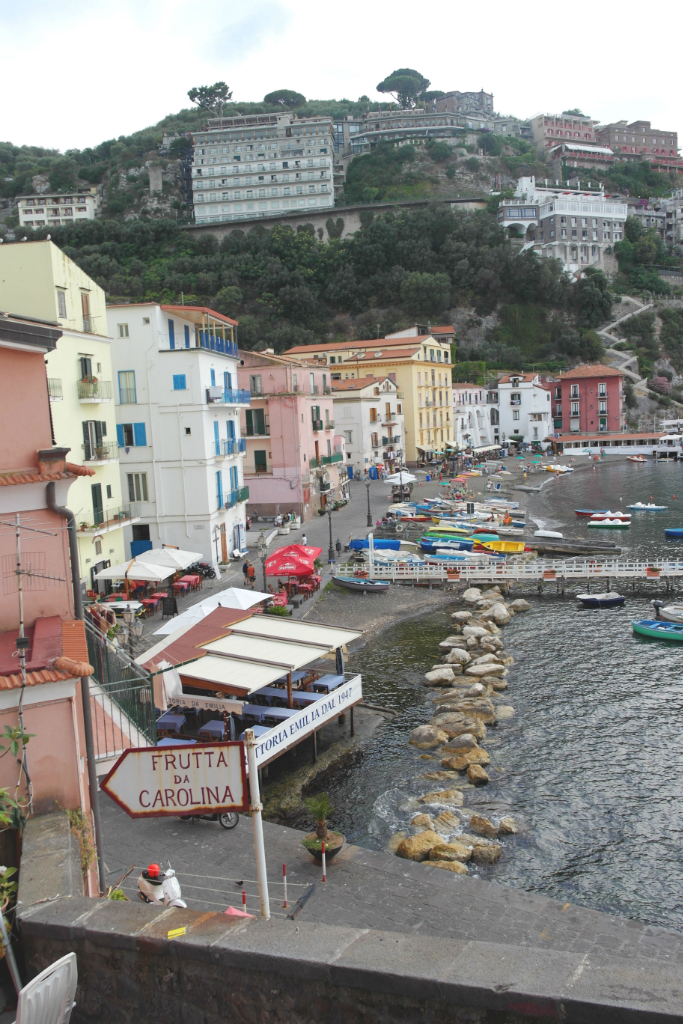 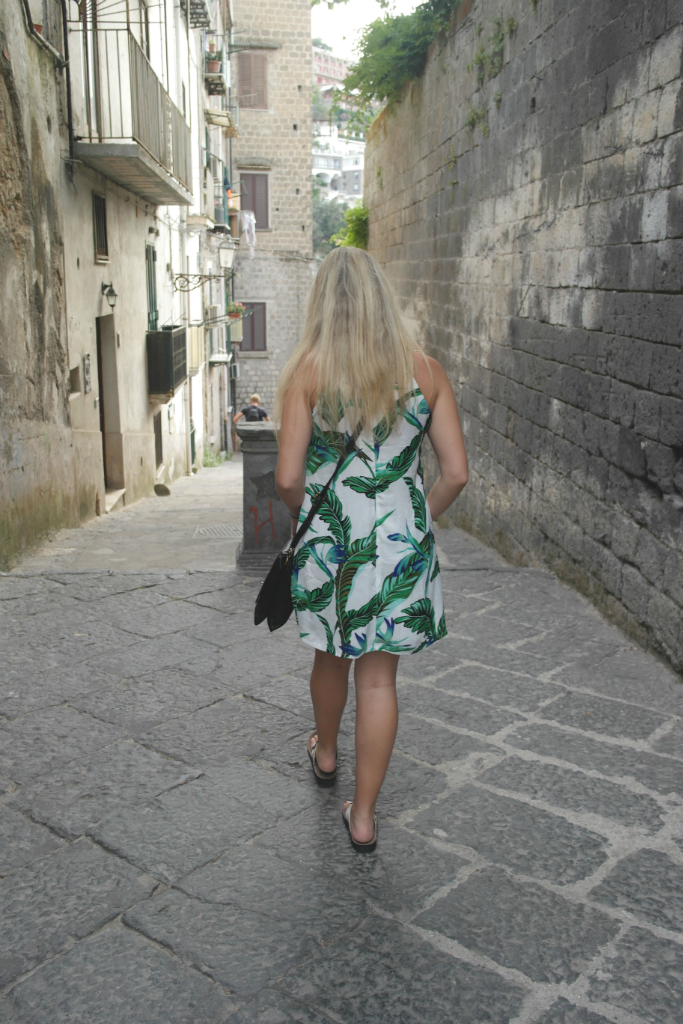 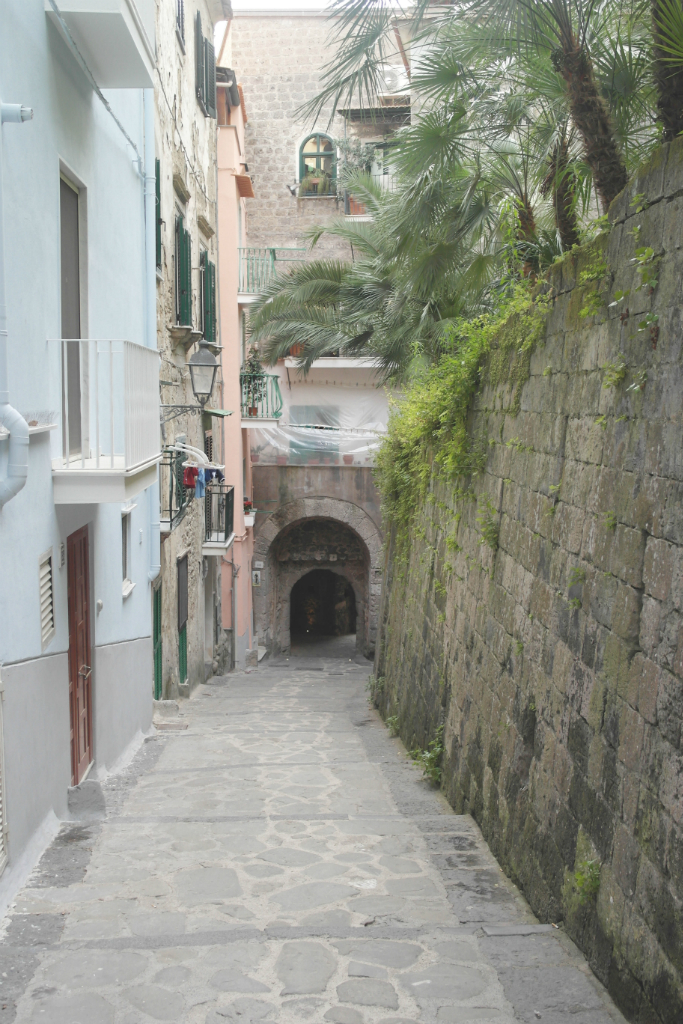 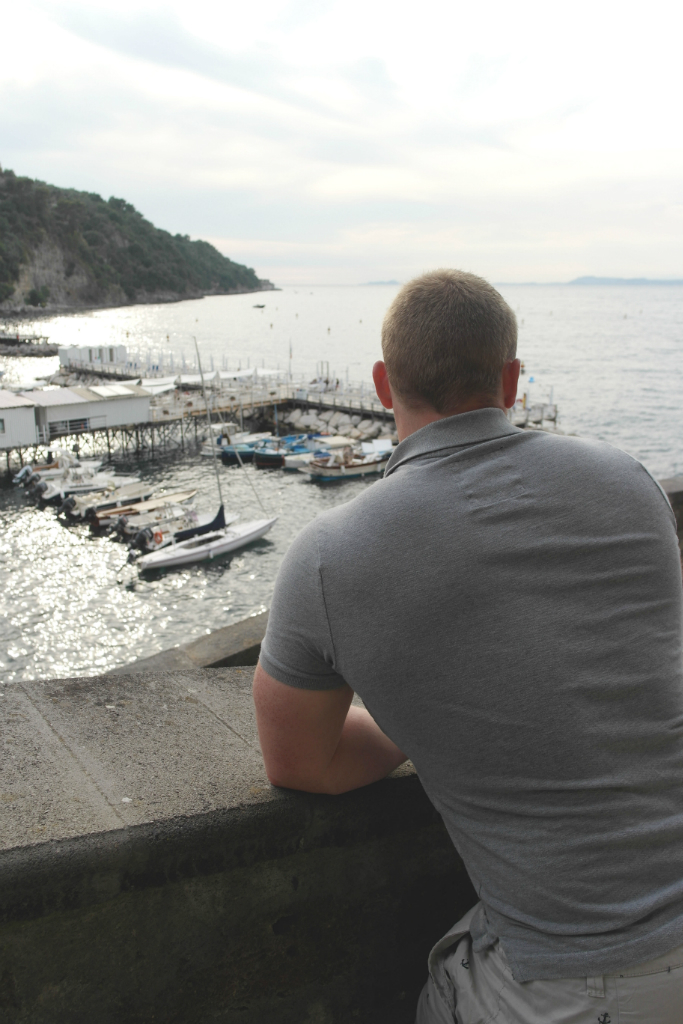 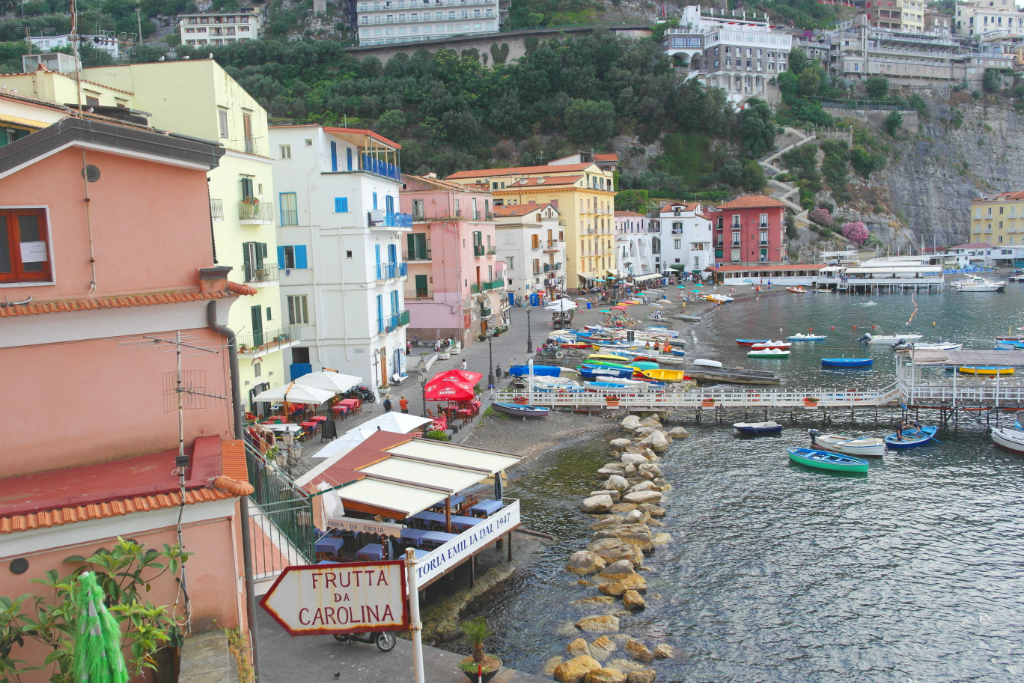 However, the thought of amazing food at Delfino’s did tempt us. It’s the building with the small pier at the far right of the picture.

Although sometimes Trip Advisor doesn’t always give the true indication of a place, this time – luckily – it didn’t lie, as we were presented with the most beautiful restaurant, friendliest staff and panoramic views of the mountains, sea and traditional buildings. Contented with our surroundings enough to have had a brilliant night in itself, the food served was out of this world too – something I’m not sure I’ve done justice to with our photographs, so you’ll have to make do with my word! 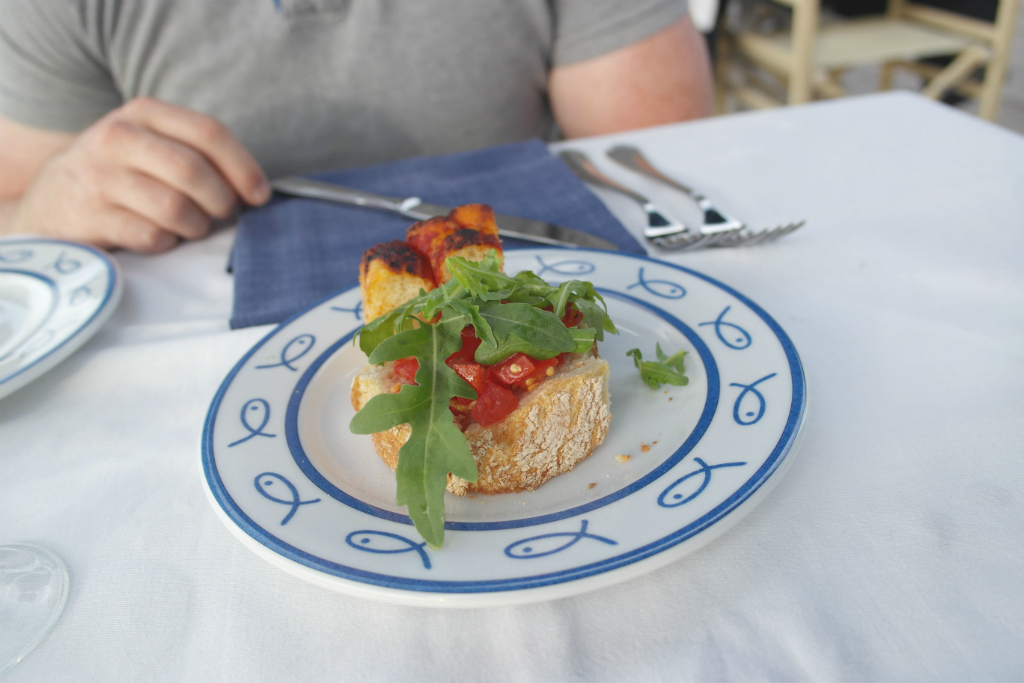 Gluten free, although a foreign word to some of the restaurants in the UK – was actually so easy to explain in Italy, as pretty much everywhere caters for it. Delfino in particular, went out of their way to make sure I wasn’t missing out – as after a quick mention of my intolerances, not another word was said and everything they brought out thereafter (even if I hadn’t ordered it) took them into account. 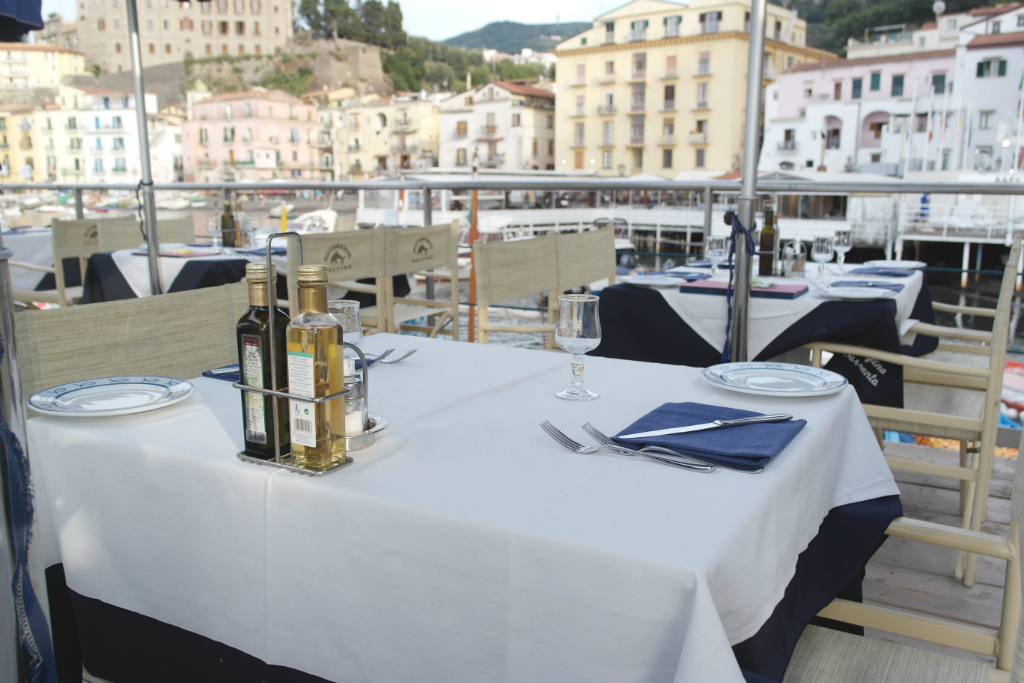 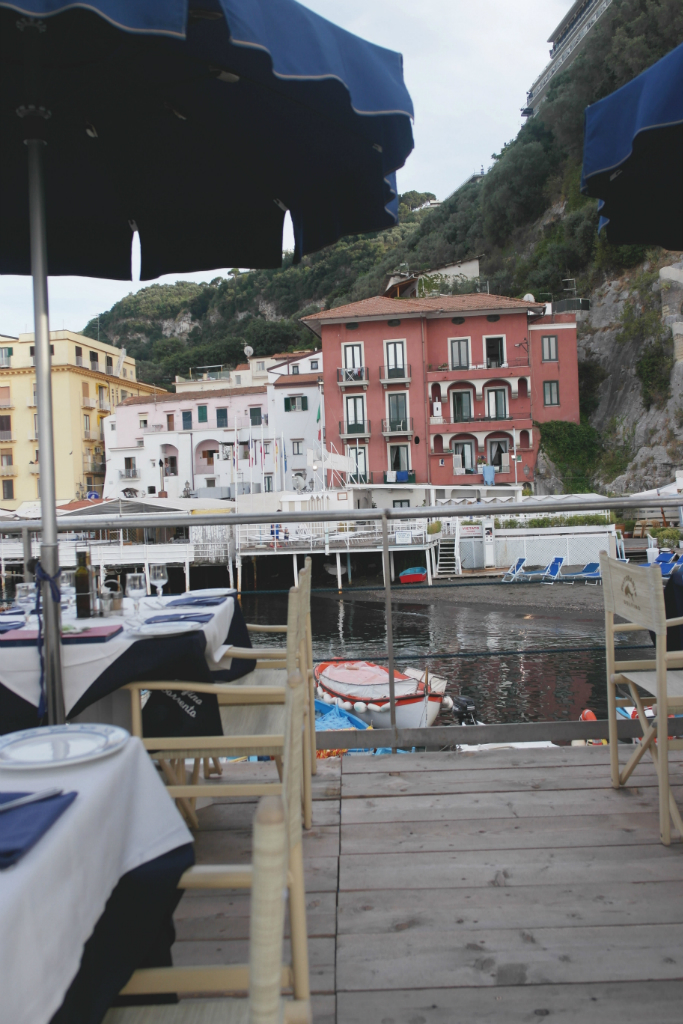 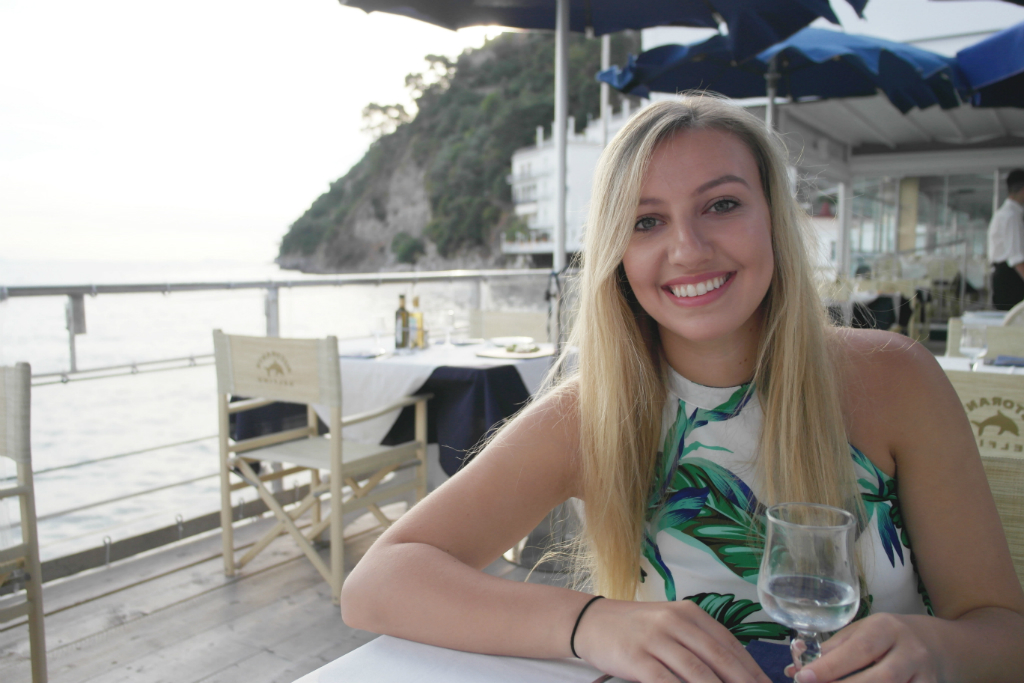 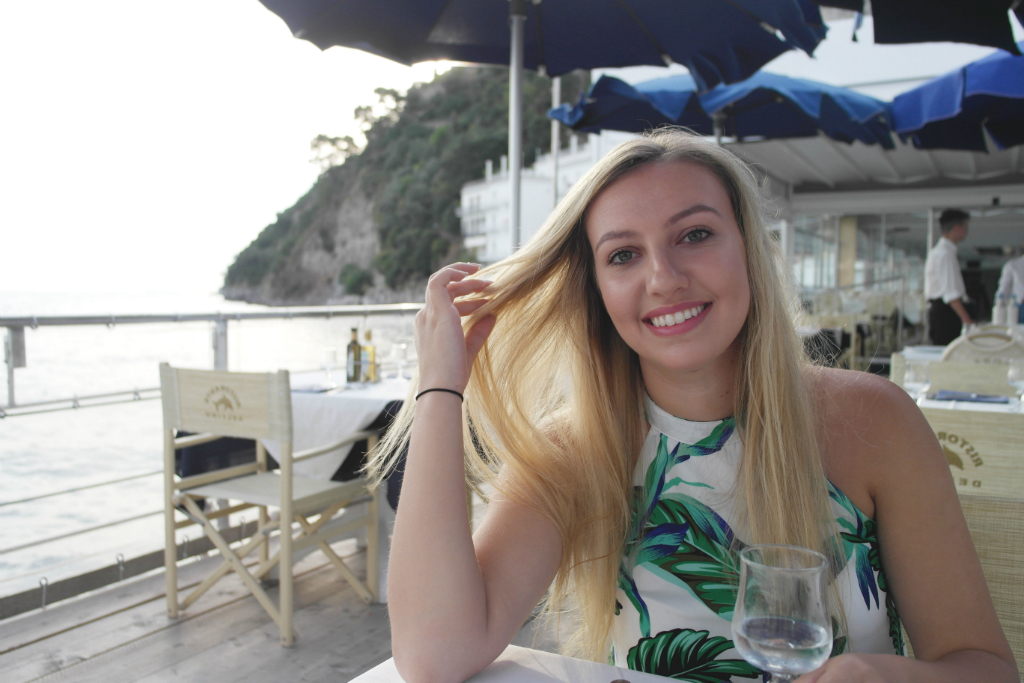 As a very kind gesture, the restaurant provides each guest with complimentary bruschetta before their meal, something I would have normally missed out on. They served me up my very own bruschetta on GF bread – probably one of the most incredible dishes I’ve ever tasted. It might not look much but the fresh tomatoes had been marinating in olive oil for hours, sprinkled with chilli and lime and the bread was toasted to perfection. I’m not usually a fan of tomatoes unless they’ve been cooked – however this, had me converted! 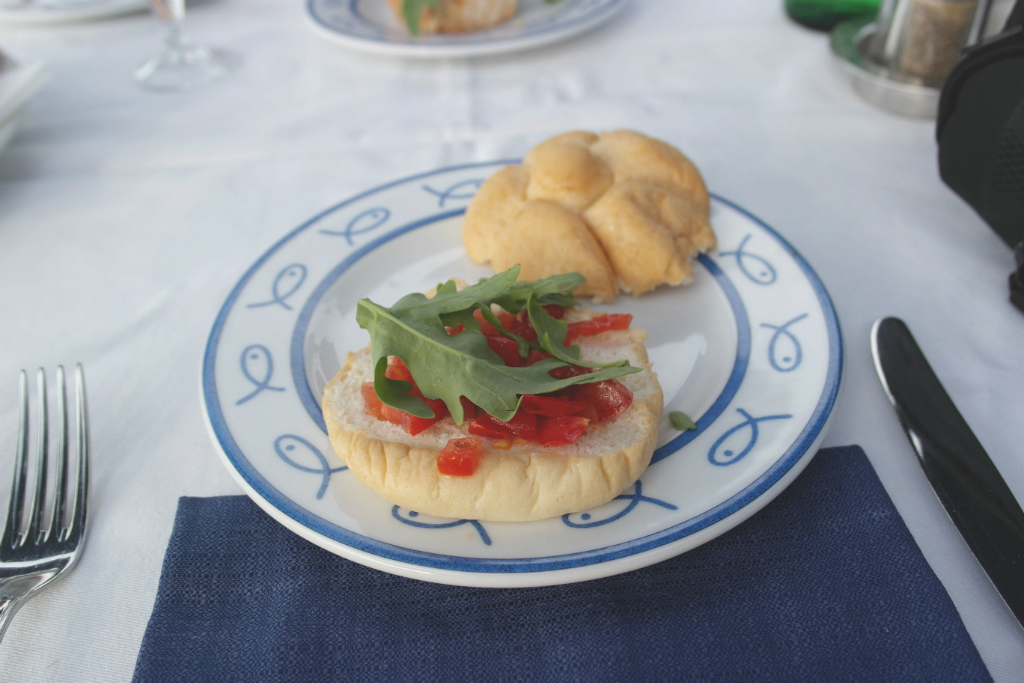 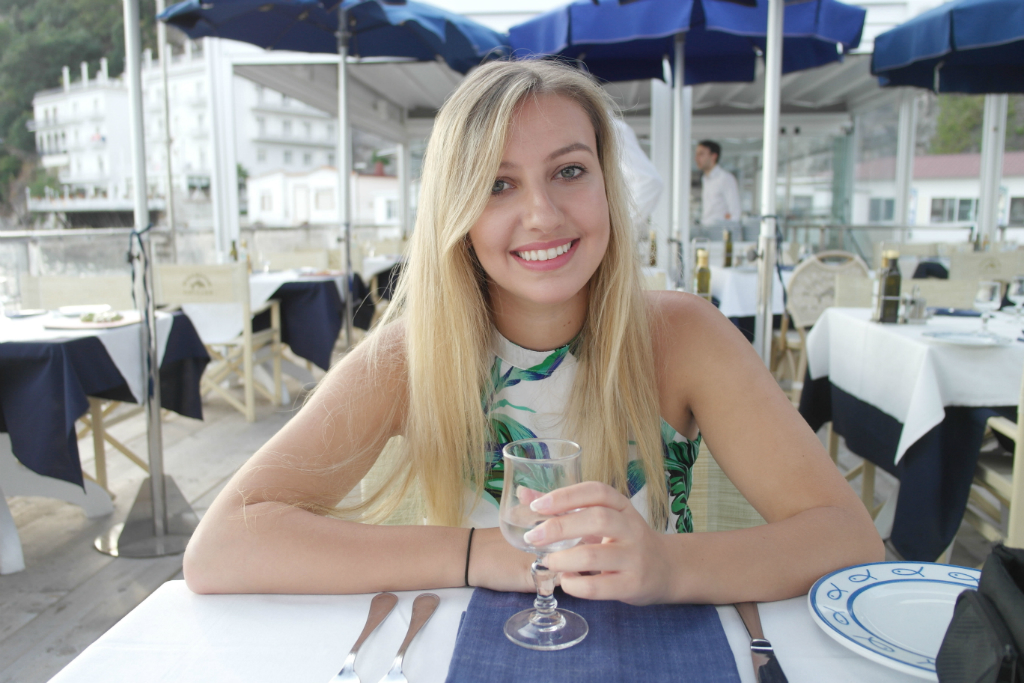 Main course wise, Sion went for the swordfish – which he absolutely loved, while I opted for GF pasta in fresh pomodoro sauce. Probably not the most adventurous but most items had cheese or milk in them and to be honest, I love nothing more than flavoursome sauces and pasta – sometimes the most simple things, are the best! 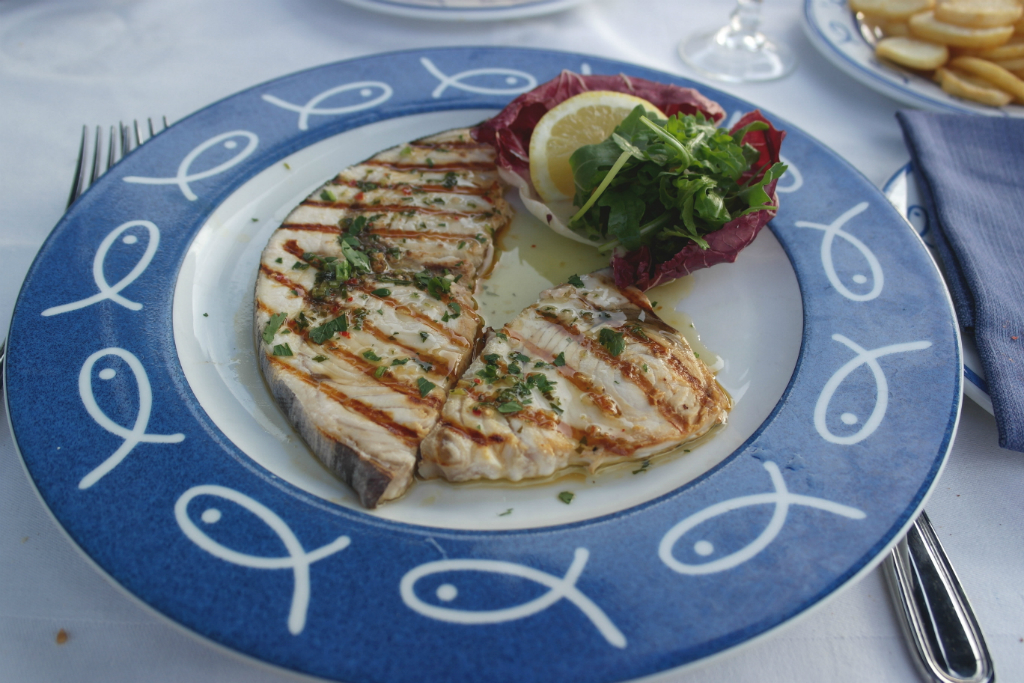 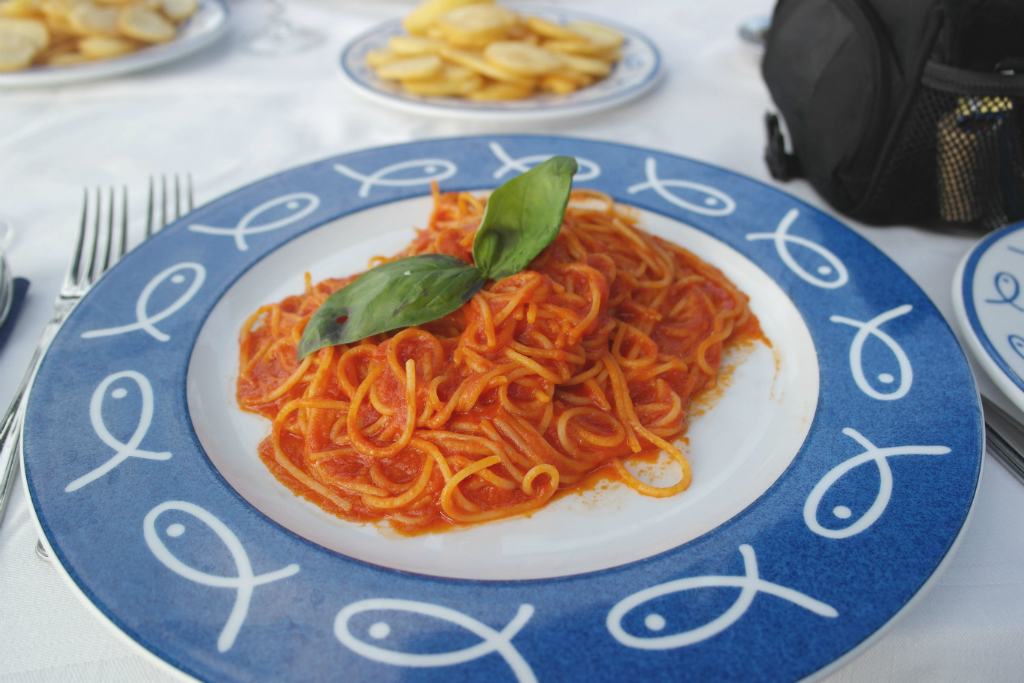 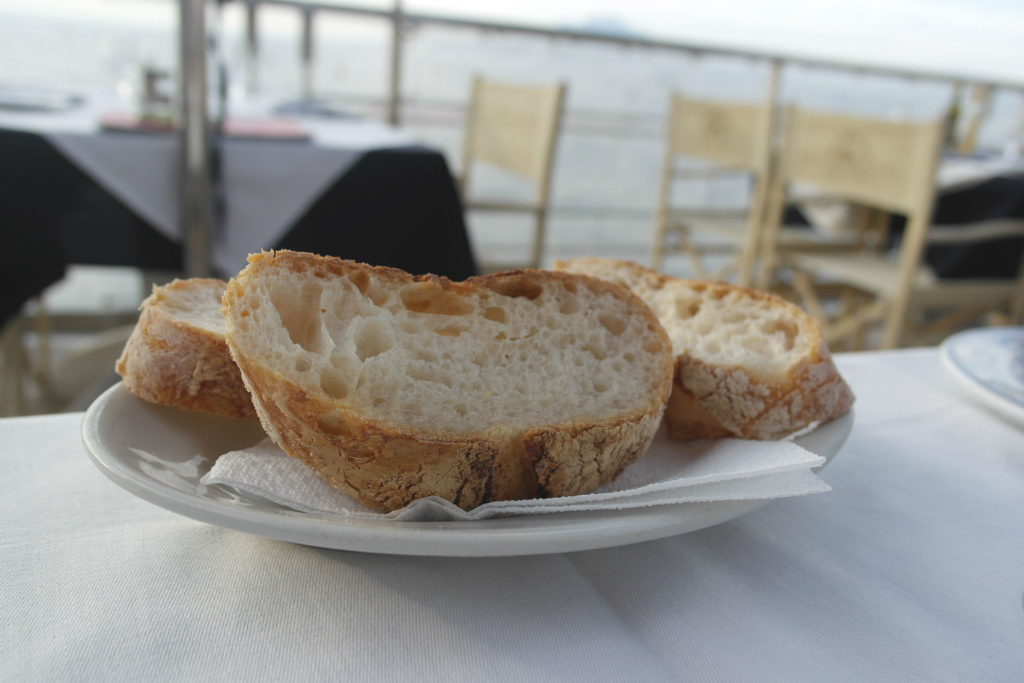 I couldn’t finish my plate of pasta (it’s more enormous than it looks) even though I kept trying to spoon more mouthfuls in (it was too good to go to waste) which became a bit of a running joke with the waiters, who kept coming over to check if I’d finished. Eventually, I admitted defeat and so we spent the remainder of the evening walking off our massive meals, exploring every inch of the Marina Grande – even watching the talented fishermen at work!

We had the most beautiful day, ate far too much in the way of carbs (well, I did) and for me – it was the first time I’d felt fully relaxed and at ease in months. There’s something about going on holiday, settling into a good book and completely forgetting all about the everyday worries life presents. I find it very difficult to ‘let go’ and relax completely, something I rarely give in too – however on this day, I was completely absorbed into the chilled Sorrento way of life!

Have you ever visited Sorrento? What did you think about it?

The Ultimate Guide to: Madeira 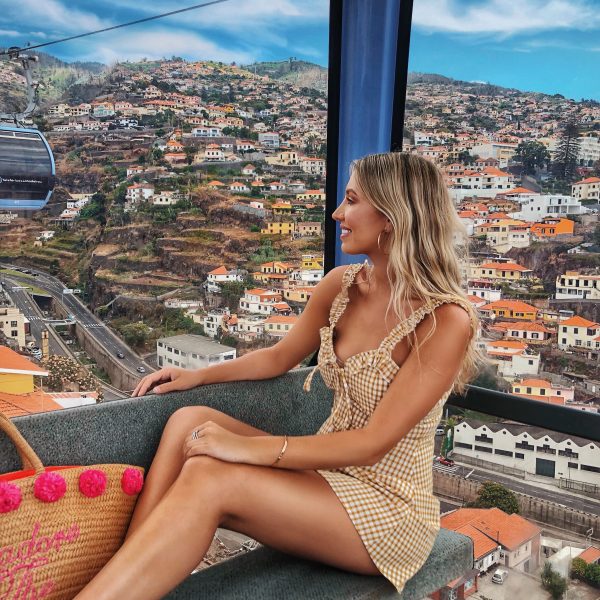 My Birthday in Brighton 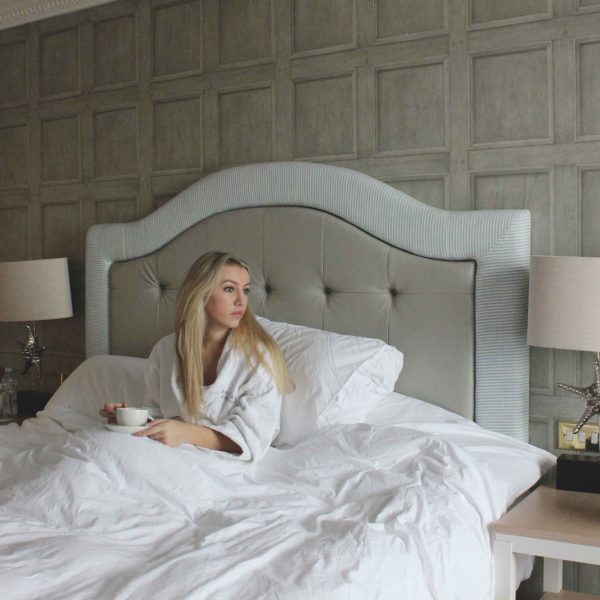 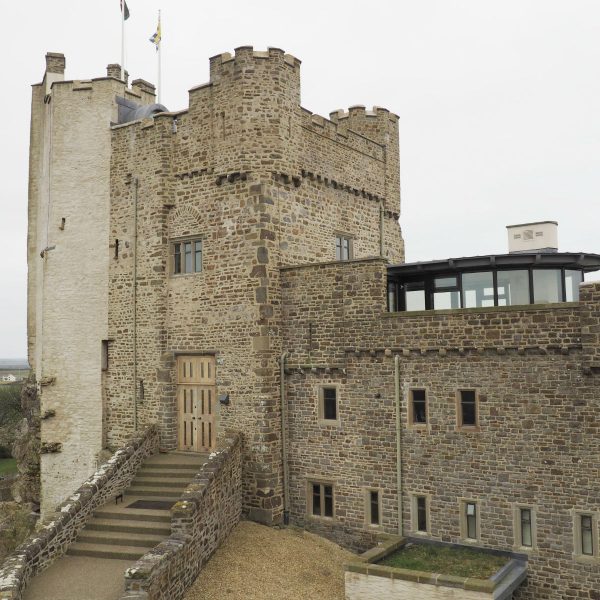