I can’t quite believe I haven’t even properly ‘announced’ this on my blog, but we’ve MOVED HOUSE!

In mid-December – about a week before Christmas in fact – David and I bought our first home together and moved into a very blank canvas.

If I’m totally honest, the move all happened very quickly and we managed to secure a deal on a house that was much larger than we were expecting. We capitalised on the relatively slow market in our area and put in an offer that was much lower than the asking price.

After many back and forth negotiations, we got the house – and in we moved.

As it’s only David and I at the moment, lots of our family were asking us what on earth we were going to do with FIVE bedrooms. But fear not, I soon filled them up with my ridiculous amount of clothes, shoes and body lotions. And it means we can have our family to stay at Christmas too, which is wonderful!

The house is a new build and as mentioned, is a very blank canvas. I love the fresh, clean and modern feeling of new builds but am very excited to inject a bit of personality and character into our home, because it’s much needed. Presently, it’s all magnolia walls and plain bulbs sticking out of the ceiling.

As it’s our ‘forever home’, we aren’t rushing in to do everything at once like we were with our last place. We are taking the time to invest in furniture we’re going to love for years to come and taking the home renovation process slow.

I’d love to document the process on my blog, YouTube channel and IG page, because I didn’t do this with the last house – and would have loved to have looked back on our progress.

As I’ve said, it’s going to be a slow burn – but I’m really excited to share it all with you and hopefully learn some new tips to share along the way.

Admittedly, when we moved into the house I felt totally overwhelmed by the number of rooms we had to design and decorate. Obviously ‘putting your stamp’ on the place doesn’t need to happen instantly, but when you’ve moved into a home that is literally just four walls and floor, you have to get a bit of a jiggle on, in order for it to actually feel like a HOME, rather than an empty space.

The first room we decided to try and finish first was our master bedroom, because we figured that was probably the place we were going to spend most of our time (we do sleep in there 8 hours of the day, everyday, so it makes sense).

Prior to moving in, like every girl does – I had a Pinterest board filled with ideas, inspiration and designs. The vision was that our bedroom was going to be a chilled, cosy sanctuary to relax in – so we steered away from the white walls of our previous house and went for something a little more adventurous.

But before I get started telling you about the ‘after’, I ought to show you the ‘before’, so that you can really envision what a transformation this room has had so far.

As you can see, the room was a VERY blank canvas, with magnolia walls and a blank and rather sorry looking window frame.

Please note, the images featured in the moodboard have been found on Pinterest and are used for reference purposes only. I do not claim to own them, they have been used for inspiration – so you get a feel for what we were looking to achieve, before we started decorating.

I’ll be totally honest with you here, we couldn’t decide on blinds or curtains – so we ended up going for both. I’d seen on Pinterest that often you can create a bit of a feature in itself when you double up – and so we chose to weave in the grey and blue tones we’d used on the walls, in with the window dressing too.

We had the blind* custom made by Make My Blinds, which turned out to be far easier than I anticipated. You simply measure up the window, choose the fabric and style of blind – and then they are made to order, without the HUGE price tag you normally get with made to measure window dressing options.

We opted for a Roman Blind in ‘Venice Frosted Glass’, which was the closest colour to our walls. Make My Blinds allow for a couple of cm’s give each side, so that they fit perfectly in the recess of the window (if that’s what you want) and they offer a variety of linings depending on whether you want total blackout or light filtering.

All of their blinds are sold with built-in child safety mechanisms, for that added reassurance in a family home – and they are very easy to fit yourself too. So all in all, you end up with a premium quality finish, without the HUGE price tag usually associated with made to measure products. We were very impressed with the service and will be ordering the remainder of our material blinds from the website too.

For the curtains, we opted for these navy velvet eyelet’s from MADE. They were actually one of the first things I ordered when I moved in, even though I knew hanging them was going to be a while off – so it’s very exciting to see them actually hanging up, rather than draped over our spare bed! I think they finish off dressing the window really nicely, and as I said – they weave together the grey and blue tones we’ve gone for in the rest of the room.

When we moved into our old place, we went a little bit crazy in Bensons for Beds. We would spend our Saturday afternoon’s in there debating which bed to get – and getting a bit carried away with all the amazing technology that they seem to be installing into furniture these days. In the end, we went for a slightly brash (but very cool) cinema bed, with a built-in smart TV, sub-woofer’s, USB charging ports and surround sound. It was (and still is) a fabulous bed for watching films, but it definitely made a statement and almost overwhelmed any room.

So although we’ve kept that bed – it now resides in the guest room, and we’ve switched up our bed to a prettier, less loud (practically and metaphorically) king size from Esupasaver. The headboard and frame was actually VERY affordable as we managed to catch it in the pre-Christmas sale and our mattress is a dream-worthy memory foam creation from Nectar Sleep*.

Having a statement wall in Farrow & Ball’s ‘Hague Blue’ was top of my priority list for this room, because I just knew it would give it a different look and feel immediately.

So in January, we ordered a pot of their matte emulsion and a few litres of Dulux‘s ‘Goosedown’ for the three other walls in the room.

Despite it being a pretty big room, we assumed that all FOUR walls in Hague Blue may be a little bit too much for us, so a feature wall seemed like the perfect compromise.

Plus, the grey walls would tie in our bed’s grey headboard.

As soon as the first coat went on, I knew we’d made the right choice and I love how the two colours work together to create a really chic but homely space (if I do say so myself!).

Goosedown has a subtle blue undertone, which I think helps to harmonise the two colours together and work really nicely.

After seeing the blue up on the wall, it inspired me to get a little more adventurous with colours in other rooms of the house, so watch this space!

I’d still really like to get some other bits of furniture for this room to finish it off, but I haven’t found the right items yet – so I’m not rushing into everything. As our accent colour is gold, I’ve been on the lookout for a not-too-expensive but lovely gold shelving unit for the corner of the room. That or a navy blue washing basket. I’m keeping my eye out!

But at the moment, we have these adorable little bedside tables from Argos (after arriving flat pack, they were assembled by yours truly – even if I did accidentally build the first one backwards – oops!). They were an absolute steal at 2 for £69! I switched up the plain handles for these gold t-bar handles from Amazon, just to make them fit the room that little bit more! I think the finished article looks more expensive than we paid for them too!

The lamps are from Wayfair and help make the gold accents in the room pop – plus they are touch sensitive, so no having to rummage around for the ‘off/on’ switch in the mornings!

Our semi-flush ceiling light was one of my BIGGEST success stories of this room, because I’d been looking for a light similar to this since we moved in, but had only found VERY expensive versions (upwards of £1500). I simply couldn’t justify spending £1500 on a light fixture for one room, regardless of how beautiful it was – so I got creative and started searching on high street homeware stores.

As luck would have it, Matalan (who actually have an AMAZING home range) had just released a new statement light fixture in gold, which was in the exact style I was looking for, for £100!! A fraction of the price – and yet it looks very high quality and expensive in person. Often it’s the first thing people comment on when they walk into the room – and I know why – it definitely makes a statement, for the right reasons.

The plant in the corner of the room is an artificial one from Matalan, partly because I couldn’t face having soil or bark on the new grey carpets and partly because I can’t keep ANY house plants alive, regardless of my best intentions too. But I love how it blends into the room seamlessly and adds a bit of life (albeit, artificial life) into the room. Matalan have a fabulous range of artificial plants and this one was about £25, which I figured was pretty good value for its size!

I’d still love to pop up some pictures on the walls, and have ordered some frames and prints to test out. However I’m a bit reluctant to put any of them on the feature wall itself, as I don’t want to overwhelm it – and I feel like it does the talking without any need for additional decor. But I’d love your advice for where you think some prints might look best?

Overall, I’m really pleased with how the room has turned out. We’re still far from being finished, as we have an entirely blank wall where our wardrobes will eventually go. But since the quotes we’ve had for built in wardrobes practically require a second mortgage, we’re going to be saving for those for a little while longer.

We took a risk with the dark blue, especially as a new build doesn’t benefit from the high ceilings and HUGE Georgian windows of the rooms that I’d seen Hague Blue painted onto while browsing Pinterest. But I think it works. We’re really happy with it. It’s the cosy, warm and snuggly sanctuary I always wanted, while still being a little bit chic and ‘grown up’. It’s worlds away from our previous house (you can watch our old house tour here) but we really love the new look!

What do you think of our new master bedroom? Any tips for built-in wardrobe building on a budget?

How to make the most of a small new-build bathroom 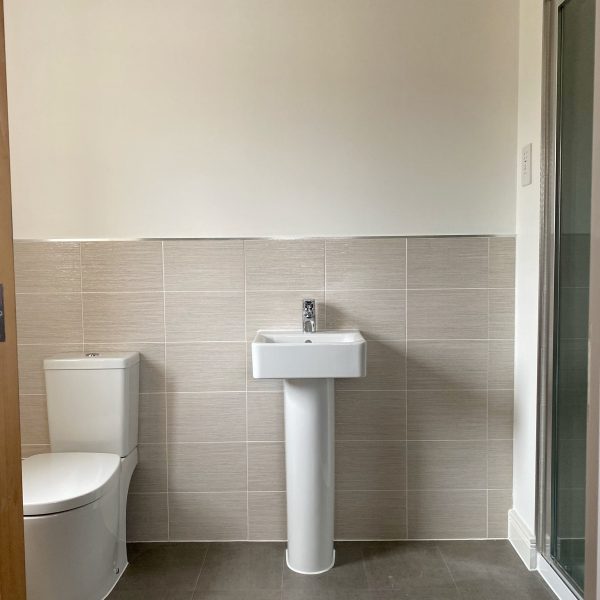 How To Make A New Build Feel Like Home 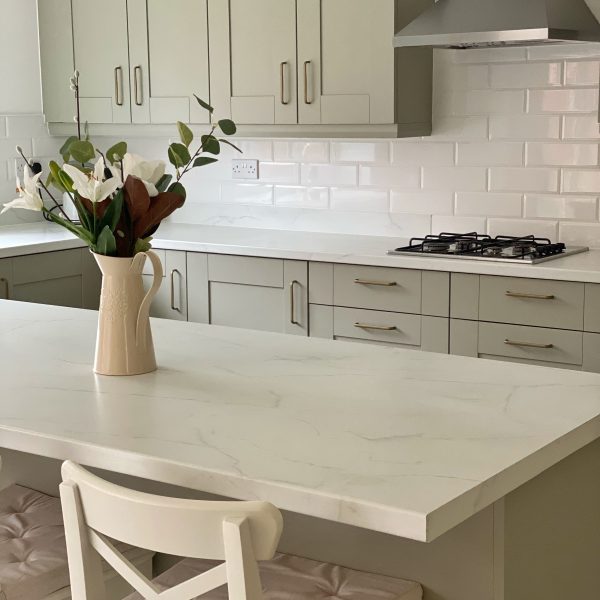 How To Upgrade Your New Build Kitchen 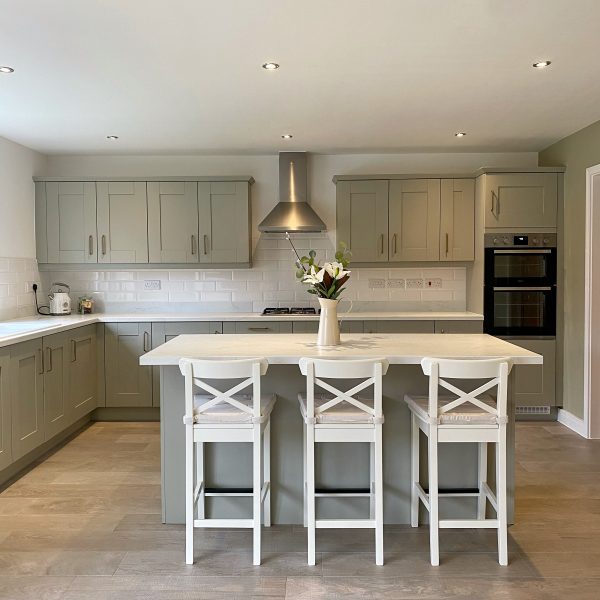