Movenpick, the luxurious ice cream brand which crops up in some of my favourite restaurants, set me a challenge several weeks ago – to create a ice cream sundae recipe which could feature on their website for the next few months (if they like it enough). Personally, anything which involves something sweet isn’t much of a challenge – but I graciously accepted and started planning and perfecting what I might try to make.

After much deliberation, and I mean MUCH, I finally settled on three of my favourite classic desserts – millionaire’s caramel shortbread, eton mess and cheesecake – and attempted to start turning them into ice cream based creations. The prize on offer is a two-hour masterclass with The Langham’s head pastry chef, Cherish Finden – so if you (like me) have a sweet tooth, you’ll realise just how much is at stake…

Movenpick kindly gave us £75 vouchers to spend on ingredients, which seemed like a whopping amount but when I started totting up all of my desired ingredients, I soon found I’d spent it before I’d even started shopping. I ordered four of my favourite Movenpick flavours – white chocolate, swiss chocolate, caramelita and vanilla, in addition to your typical favourite toppings including flakes, sprinkles, chocolate sauce that hardens upon contact with the ice cream.

Despite being on a bit of a healthy eating kick, unfortunately for me, Movenpick ice creams are simply too good to resist. Packed with hidden gems – such as caramel pieces and gooey swirls in Caramelita and real white chocolate pieces in the white chocolate flavour, they are as luxurious in flavour as they are in their looks. 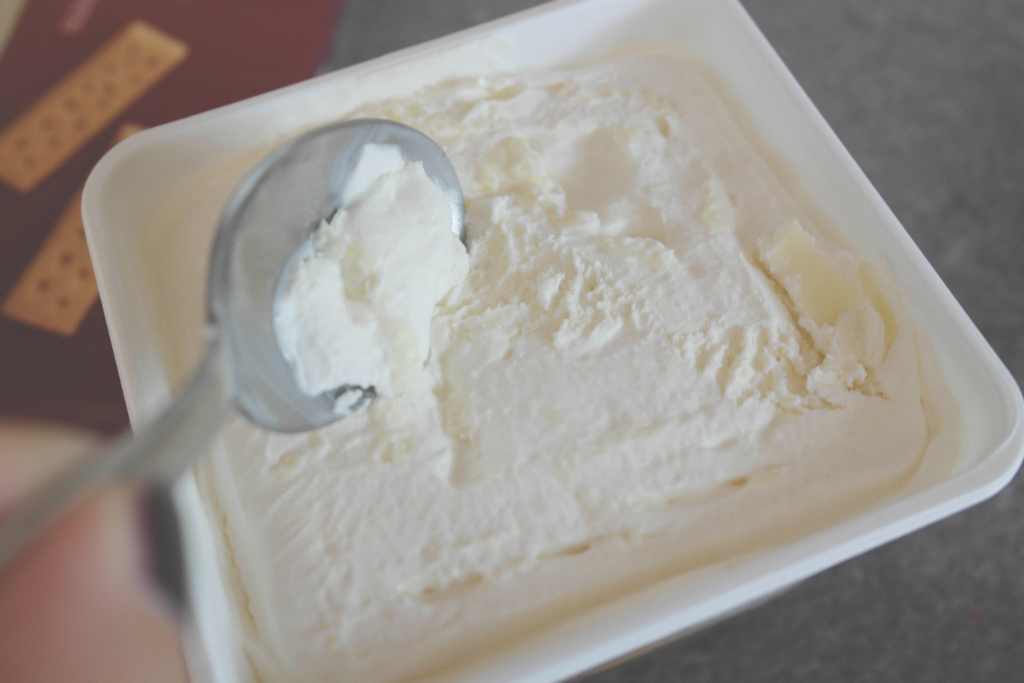 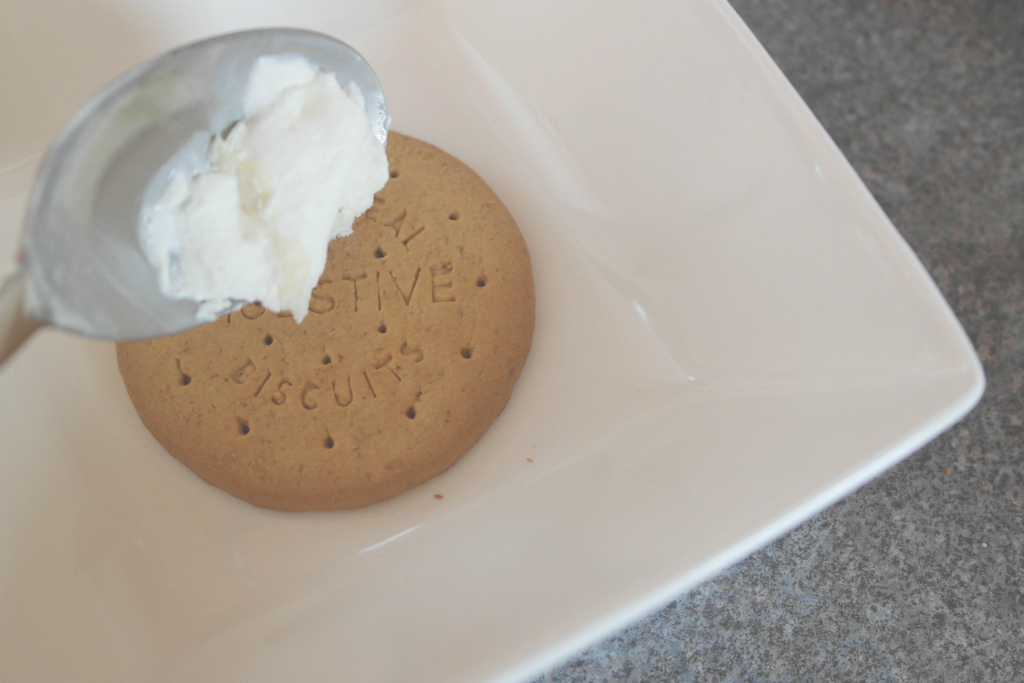 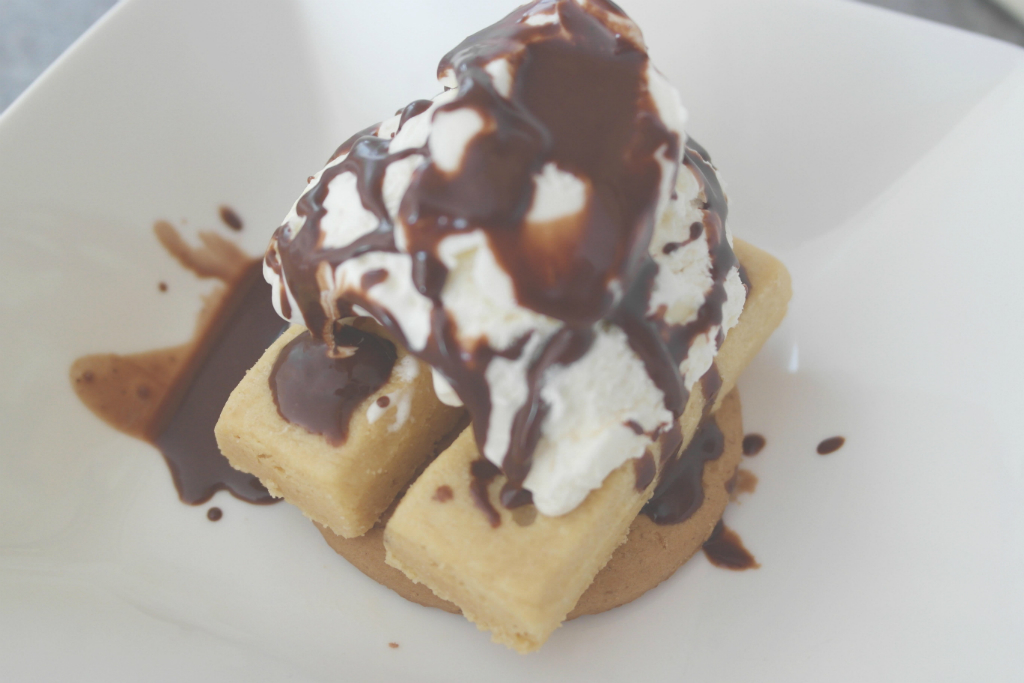 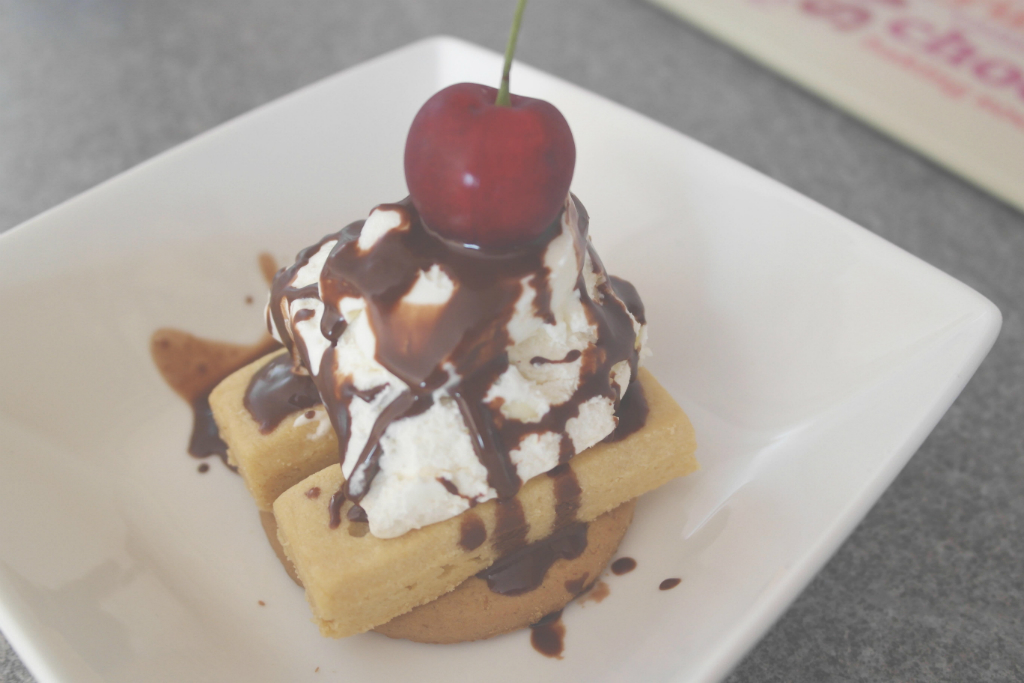 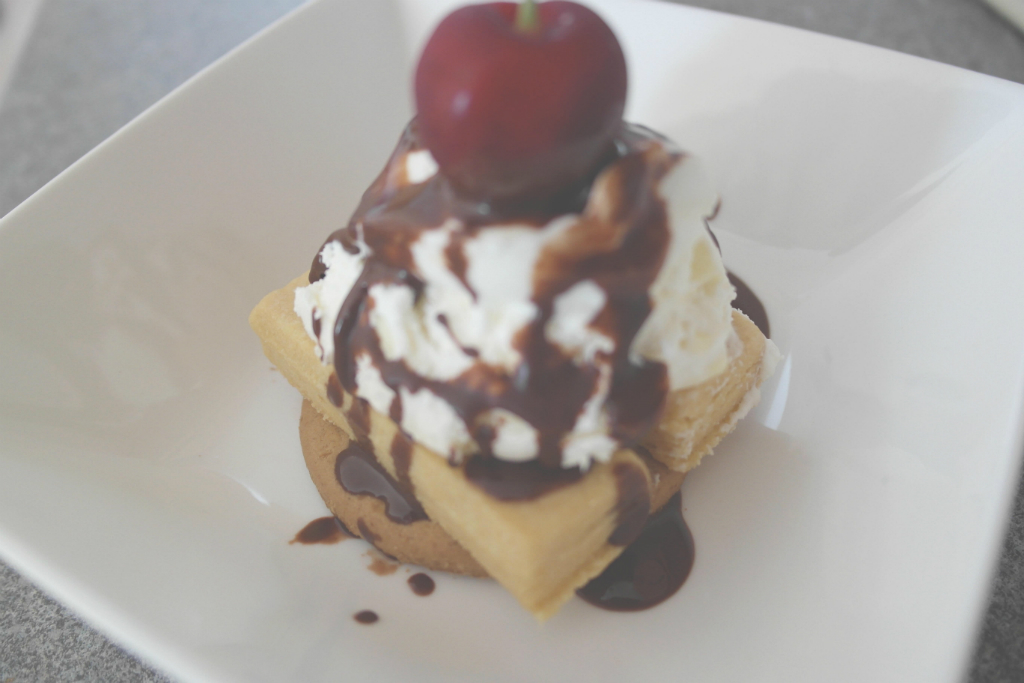 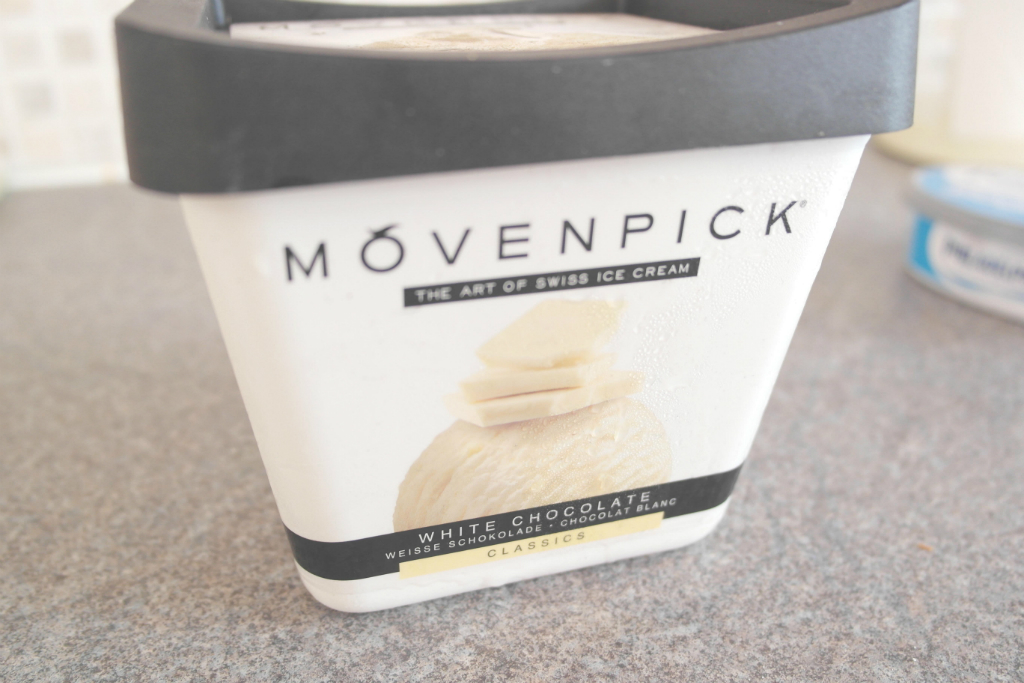 Cheesecake is one of my all time favourite desserts. Creamy, indulgent and oh so sweet, I could quite happily tuck into more than my fair share. So in a bid to make it a little lighter, I decided to re-create it with ice cream. Oh and some shortbread. Initially I mushed up the digestives and melted butter to set it like you would making a normal base, however it tasted far nicer in it’s original form, with some all butter shortbread on top.

I was sent sundae glasses by Movenpick but I wanted to get stuck in as soon as possible, so I’ve made smaller versions for the purposes of the photographs – to show them in their lighter forms. Feel free to double the quantities if you’re sharing (or not sharing), or if you want an extra indulgent treat.

To make the cheesecake topping, mix 3 heaped tablespoons of icing sugar with 2 tablespoons of cream cheese. If you want it to be sweeter, add more icing sugar – but bear in mind you’re going to be topping with chocolate sauce! Add a piece of fruit on top, for the cherry on the cake. Quite literally! 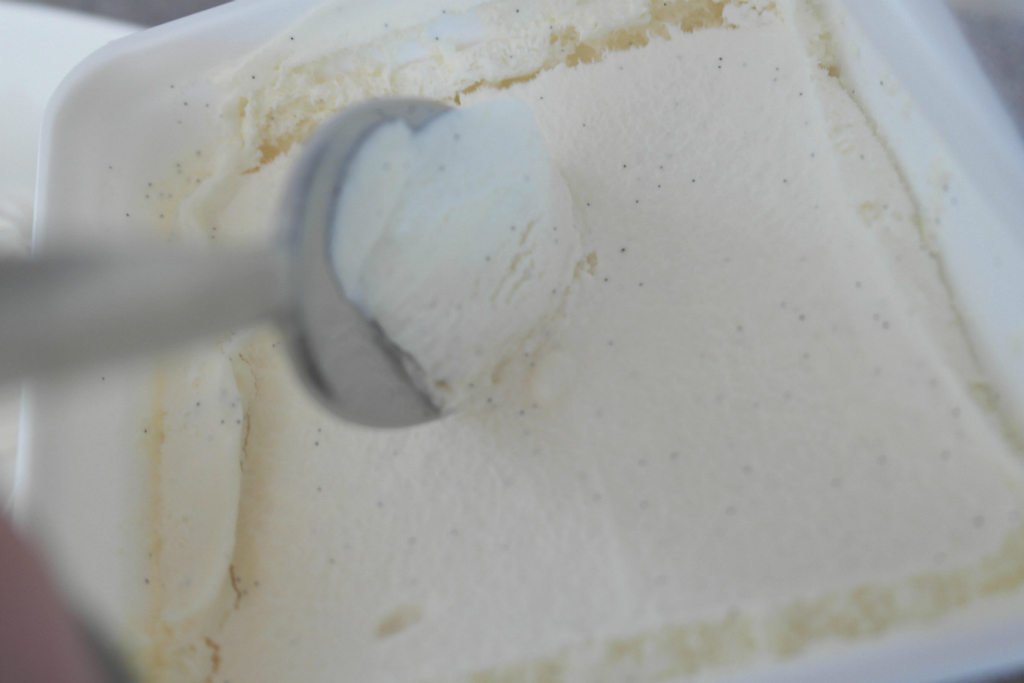 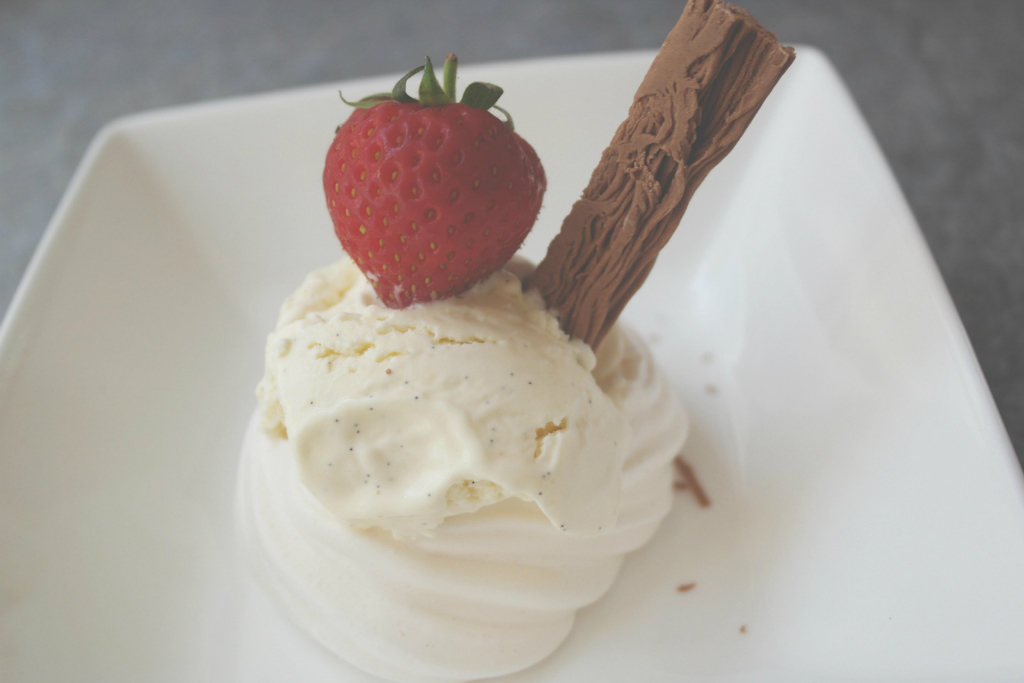 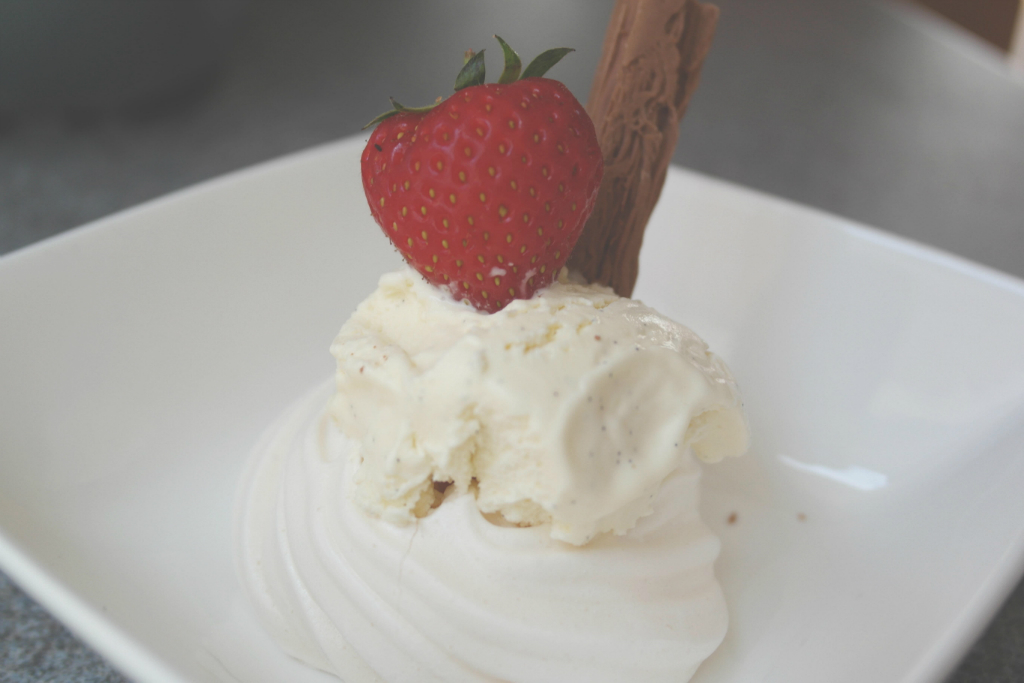 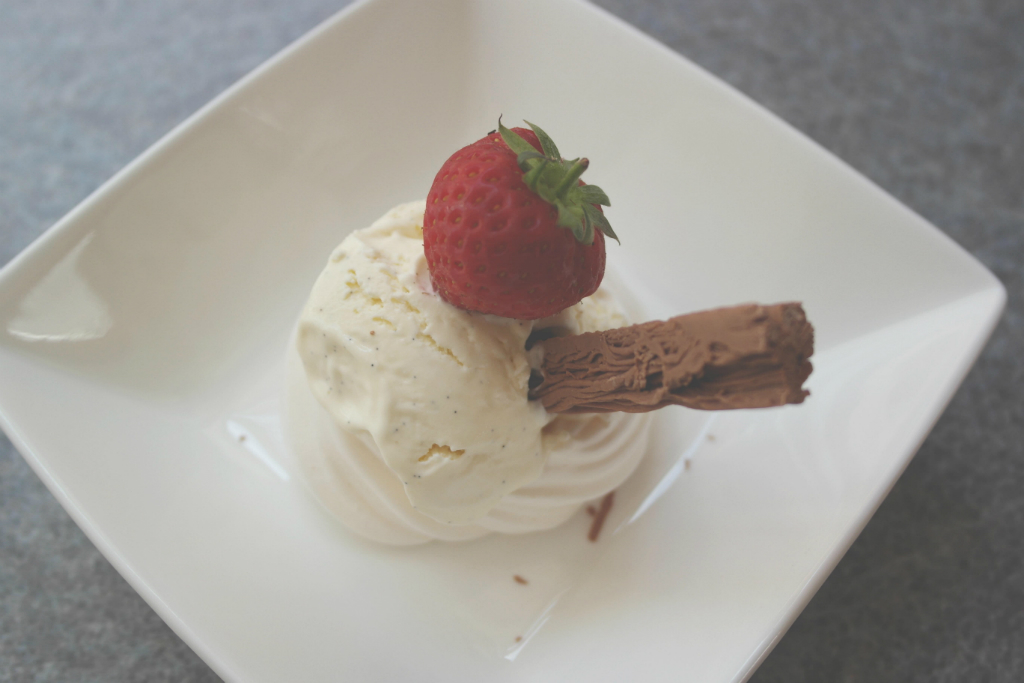 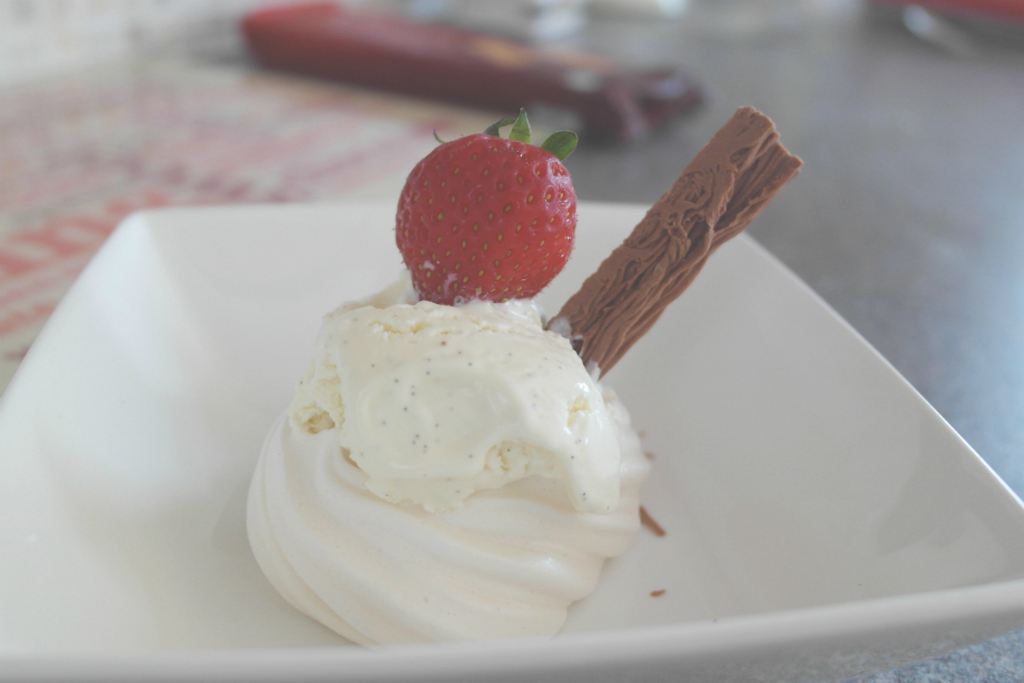 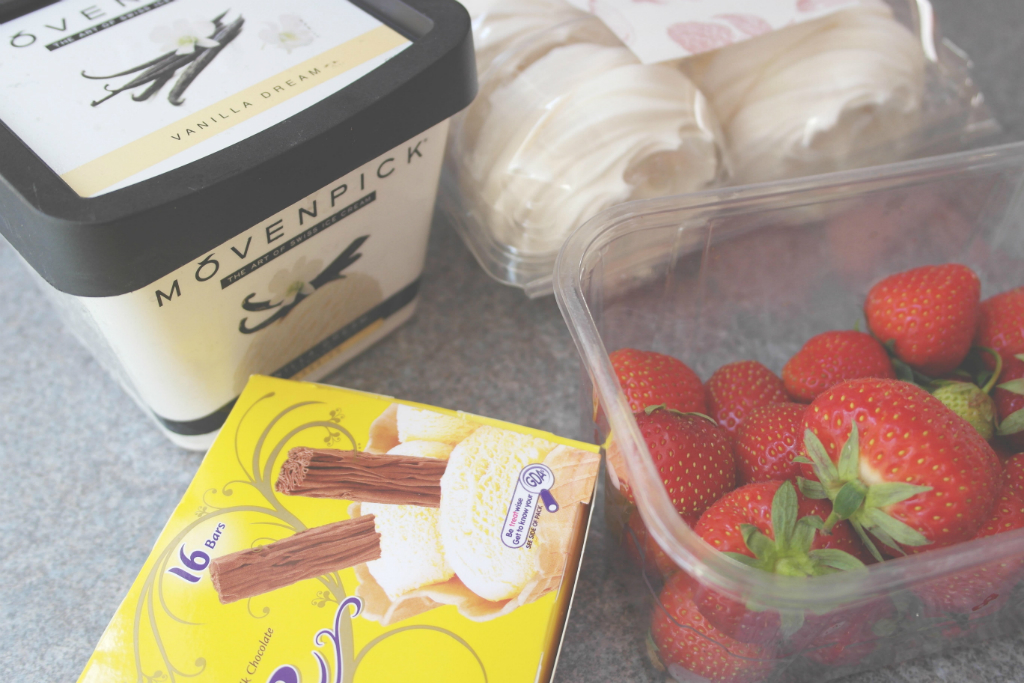 Ingredients (all from Ocado): Movenpick vanilla Ice cream, strawberries, meringues and a 99 flake (or two, just in case one happens to get ‘lost’ whilst you’re preparing).

Eton Mess is my favourite summer dessert. It’s light (ish) and oh so tasty, but the strawberries and meringue make it weather appropriate and irresistible. For best results, I’d take a sundae glass (or a big drinking glass) and crush the meringue up before pouring slightly melted vanilla ice cream onto the pieces. Add a dollop of white chocolate ice-cream (by Movenpick, which you won’t regret) and a spritz of squirty cream, a flake and a sprinkling of strawberries.

The one featured in the photograph is a lighter version, far less ice-cream but by no means less indulgent. The addition of a 99 flake gives it that finished look! 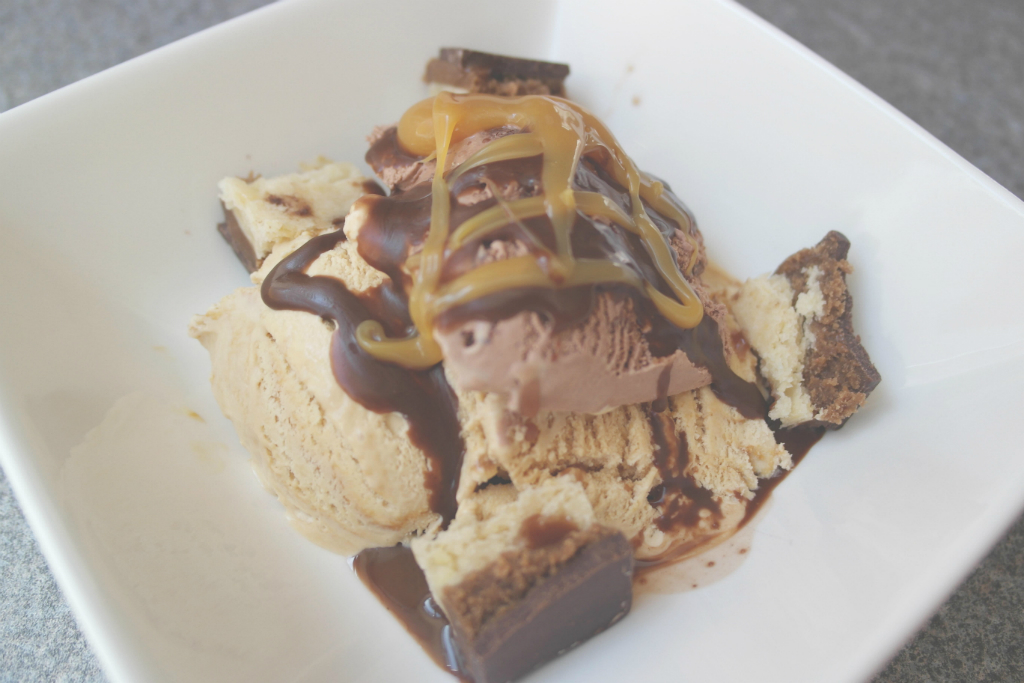 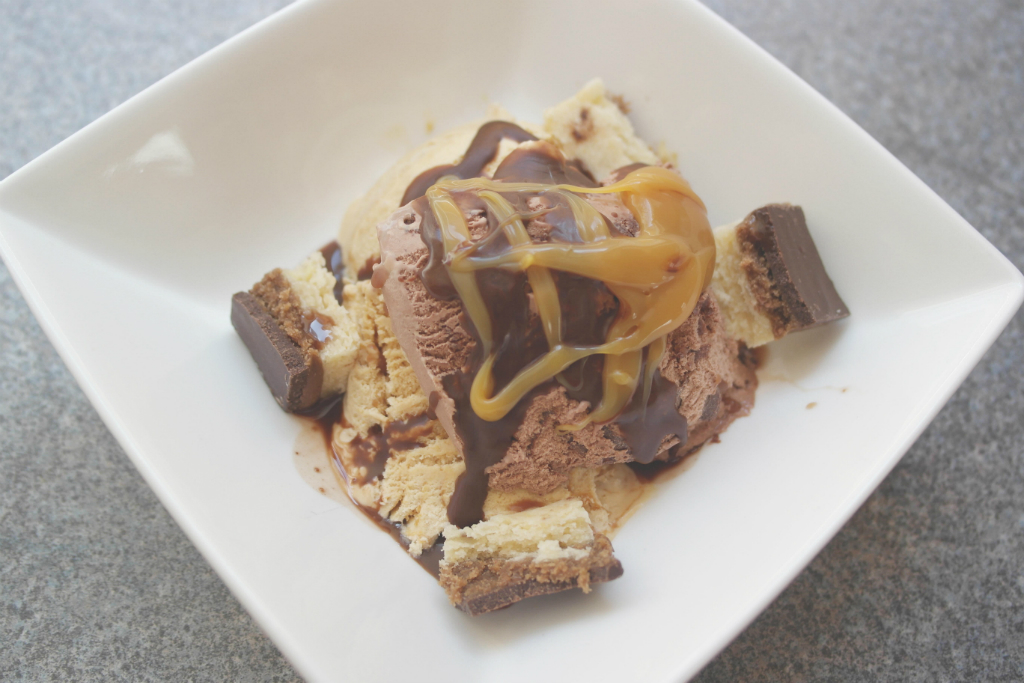 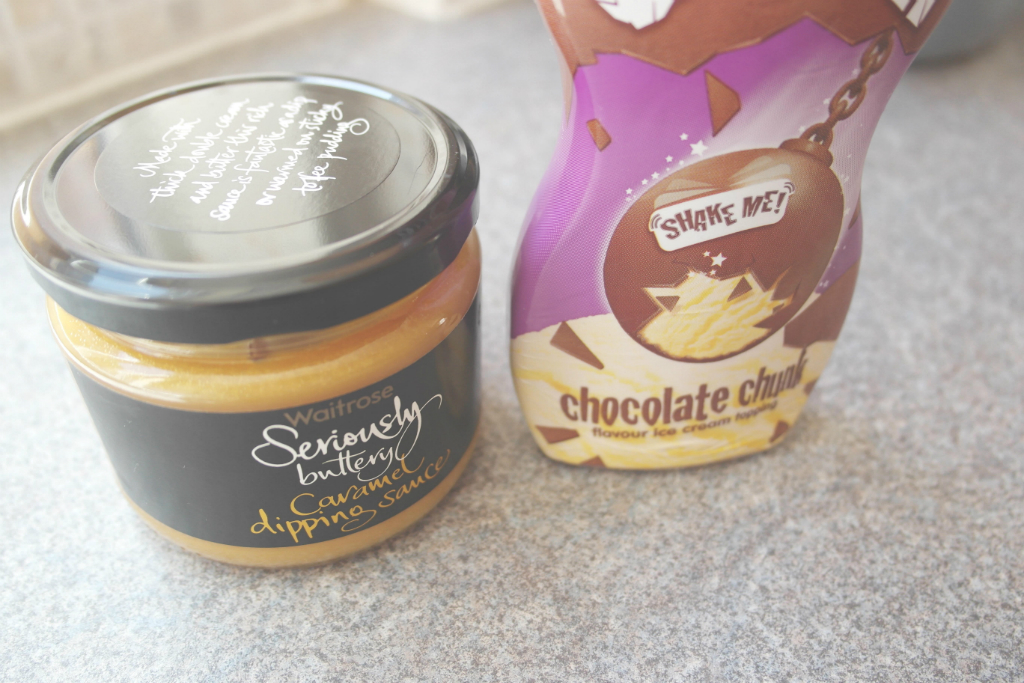 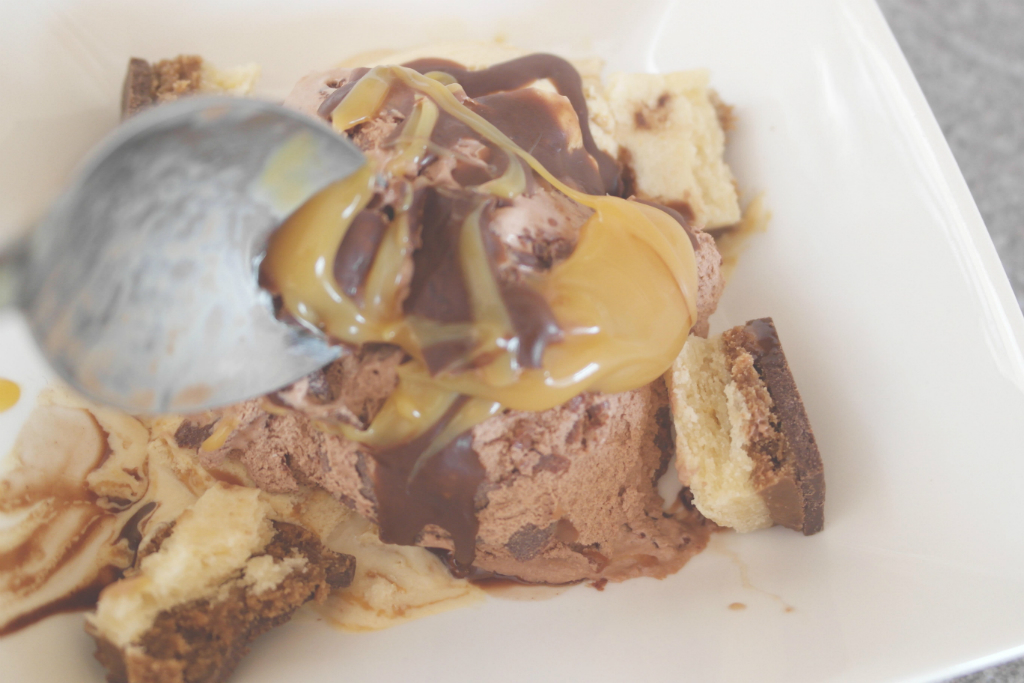 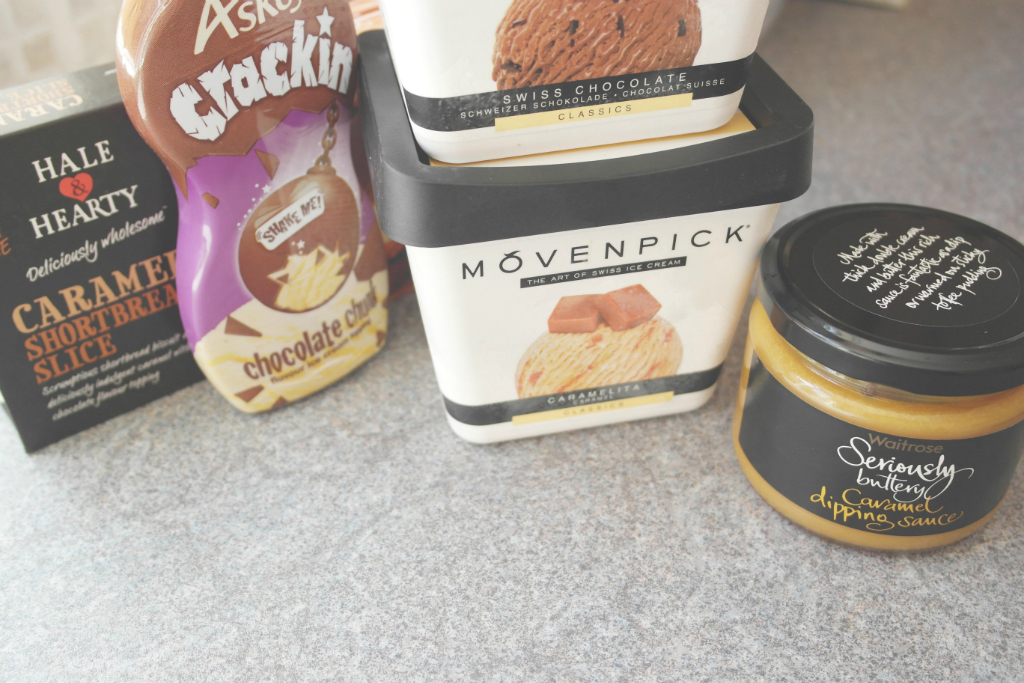 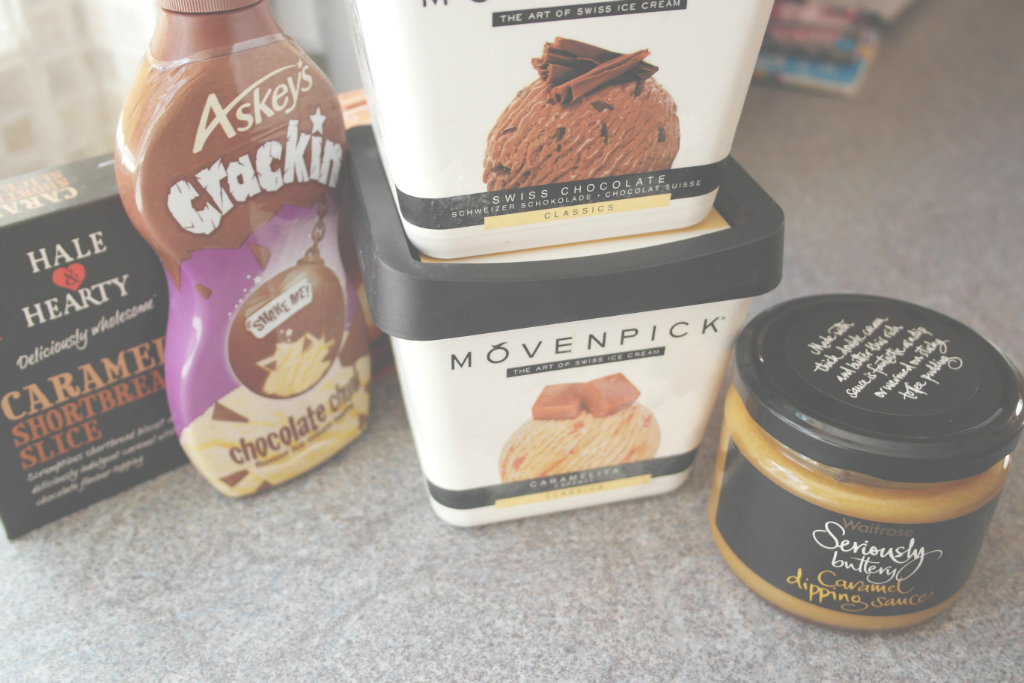 Calorific yes, but worth it – YES, yes, yes! Millionaire’s shortbread is a delicious mix of caramel, chocolate and shortbread, so to work with this (but jazz it up a little) I’ve used Movenpick Caramelita ice-cream with the Movenpick swiss chocolate ice-cream (with milk chocolate pieces), adding in caramel dipping sauce – warning this is addictive – and chocolate topping which hardens upon reaching the ice-cream. You can even add in some caramel shortbreads for good measure.

PS: as you can probably tell, my forte unfortunately isn’t in food arrangement. I’m sure yours will look far more pretty, but follow the recipes and I promise you – what they don’t have in looks, they make up for in taste! mmmm…. 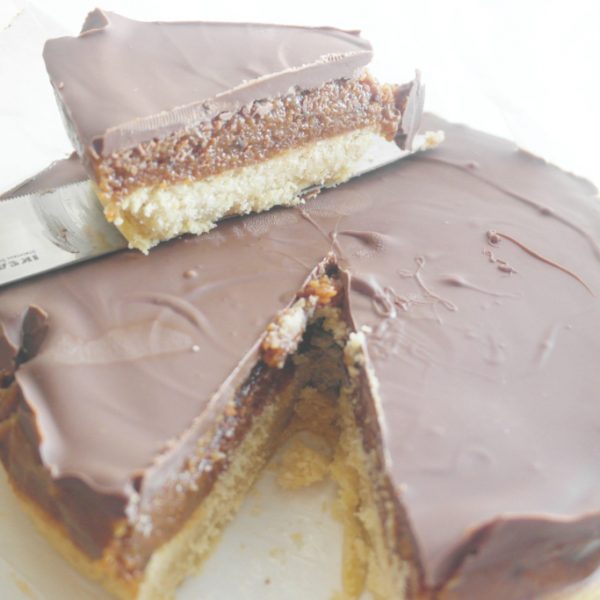 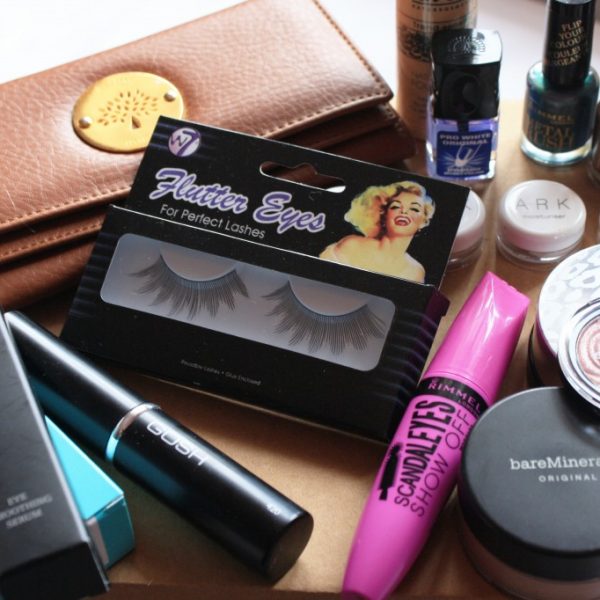