David moved into his new house about a month and a half ago, so the past few weeks have been a blur of building furniture, carpet fittings and moving various boxes around in a bid to find their perfect position. We haven’t really had a lot of time to go out and relax, so our booking at Buddha Bar was something we’d been looking forward to for weeks. I’d heard on the grapevine about how fabulous this gorgeous restaurant in Knightsbridge was – and with my favourite pan-Asian style cuisine on offer, it was certainly what I’d been looking forward to all week.

I know the whole ‘date night’ thing is a little cliche now, but I do think it’s important to have an excuse to get all dressed up and treat yourselves from time to time. So, after a day milling round Notting Hill, we got all dolled up and headed to Knightsbridge – where the incredible Buddha Bar welcomingly stood, illuminated with swirling dragon chandeliers (yes, it’s really a thing and it doesn’t look novelty at all) and panelled lights. Even from the outset, we knew we were in for a real treat.

The style of the interior carries on impressing, with a rather extravagant baroque theme throughout the bar and restaurant area. We were led straight to the bar area after stating our booking, before a rather tempting looking cocktail menu was thrust into our open palms.

On recommendation of the barman, we opted for a porn-star martini and a strawberry dragon cocktail – both equally delicious and photogenic concoctions which we couldn’t decide between so took equal sips of both. Usually we like to head straight to the table and get stuck into the food but we couldn’t help but people watch in our impressive surroundings, as well-dressed guests sauntered in and ordered their favourite drinks.

A live DJ set was playing in the corner, providing a rather exclusive and atmospheric feel – but without it feeling too much like a club where you have to shout to be heard. We felt both relaxed and in awe at how beautiful everything was (including the cocktails, which I have to say – deserve a second mention, I think you’ll agree) which is quite unusual for a formal London restaurant, where you can feel a little out of place.

We were informed that whenever we wanted to head over to our table, we could simply tell the barman and he’d have someone come over and collect us. Fancy! After intently watching a further three cocktails brought to life (complete with blow torches, flowers and strawberry pockets), we decided we had built up quite the appetite for our food and so were swiftly escorted over to our window table and handed yet another menu filled with incredible edible delights. 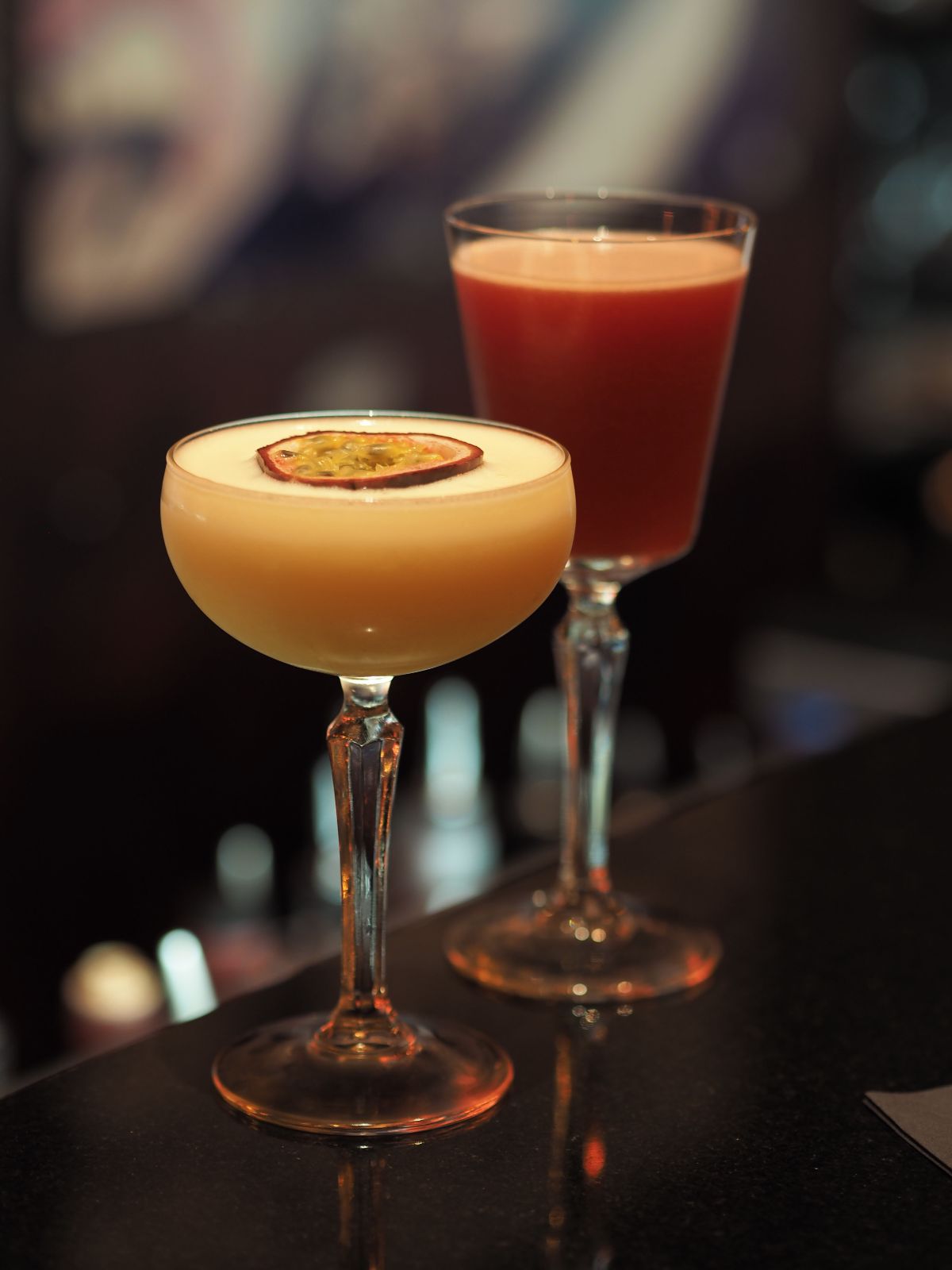 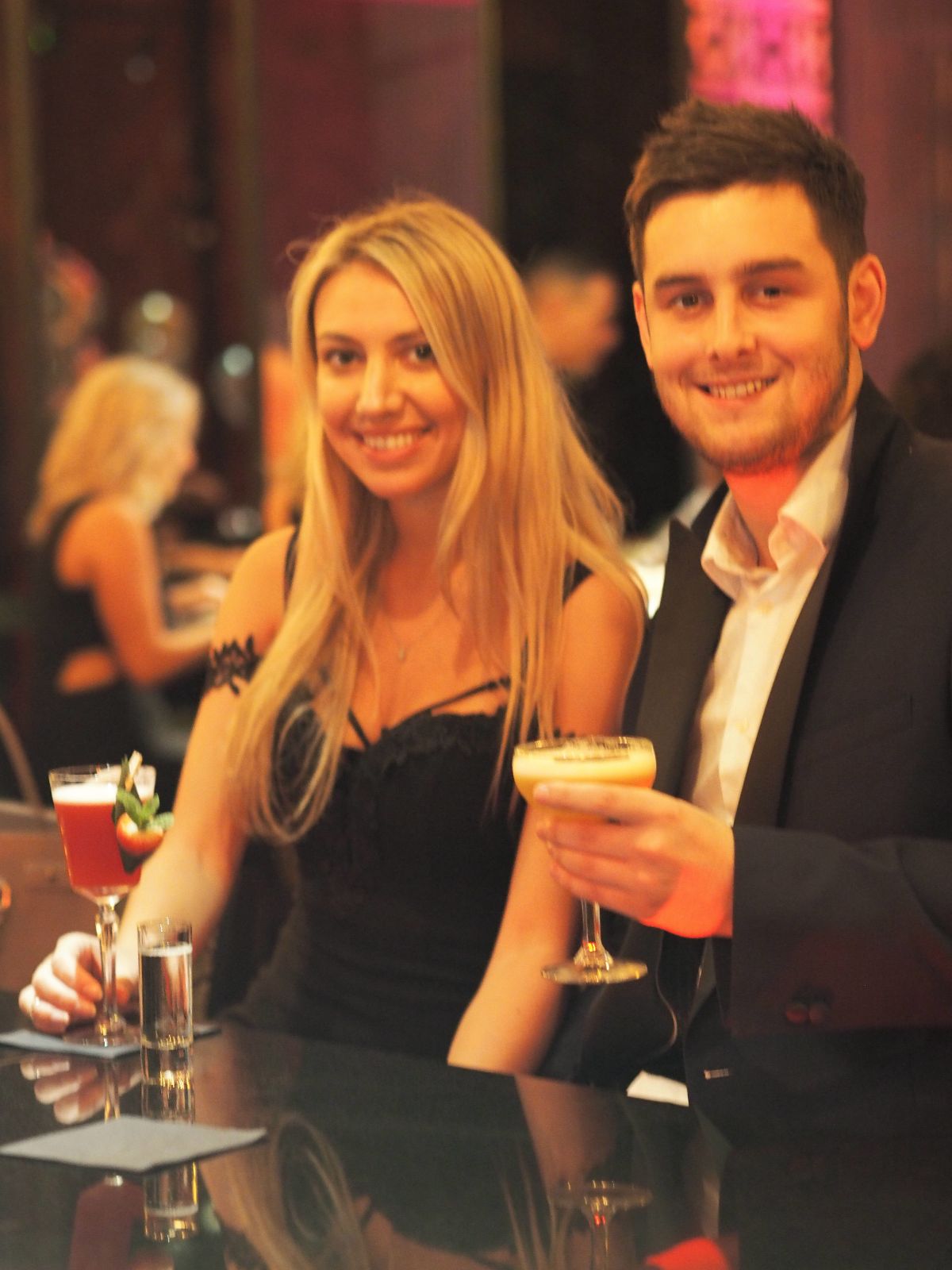 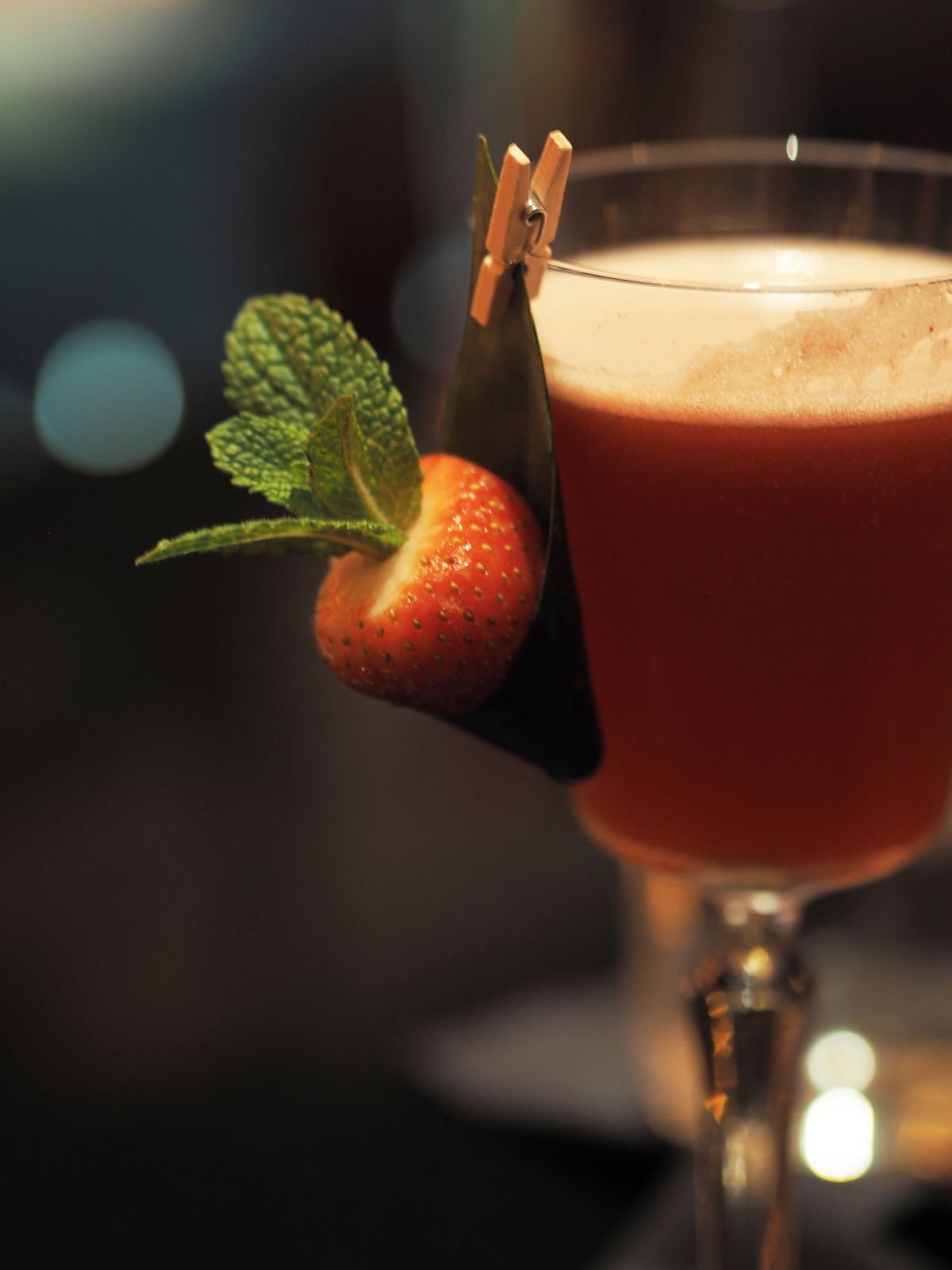 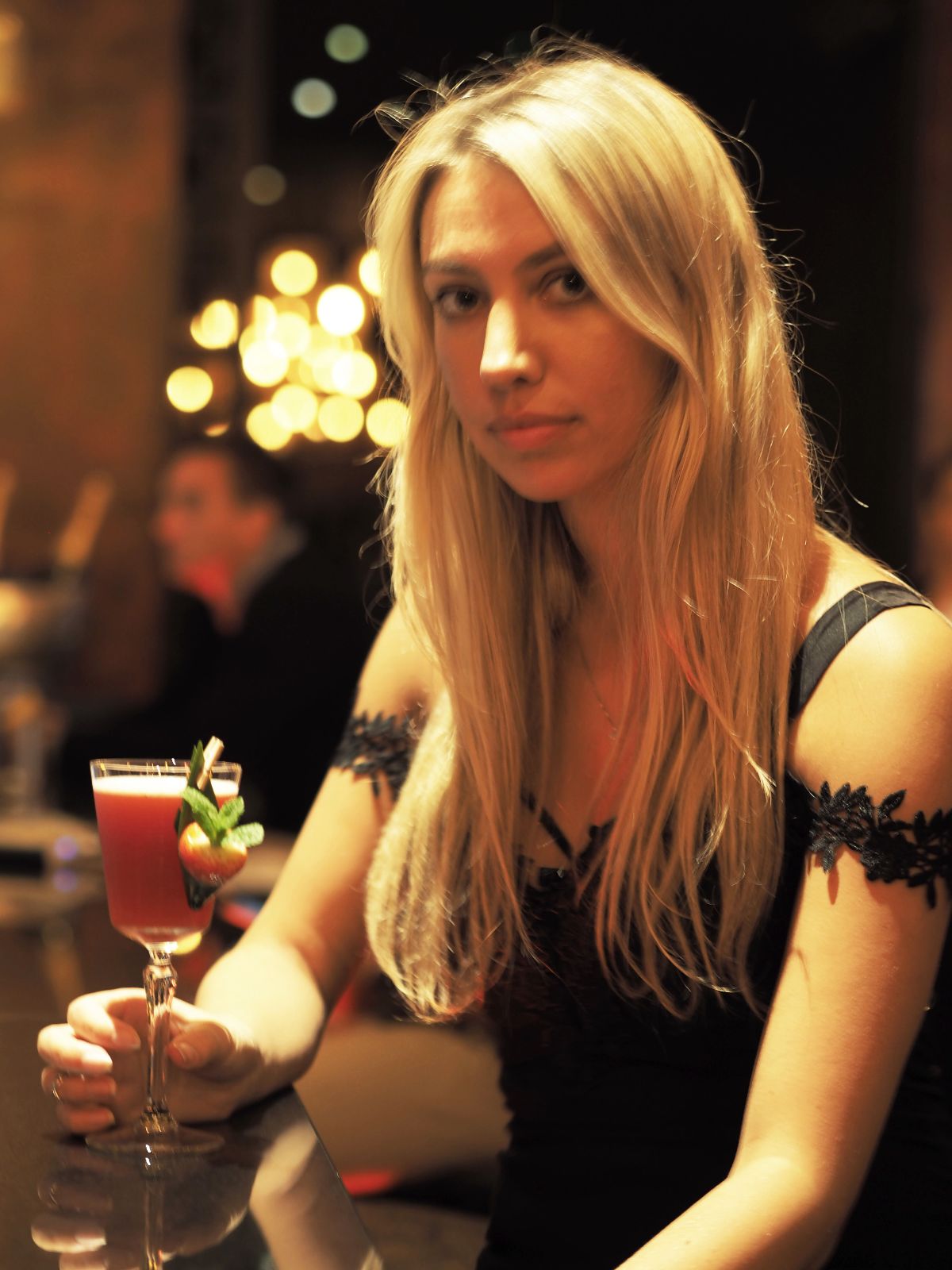 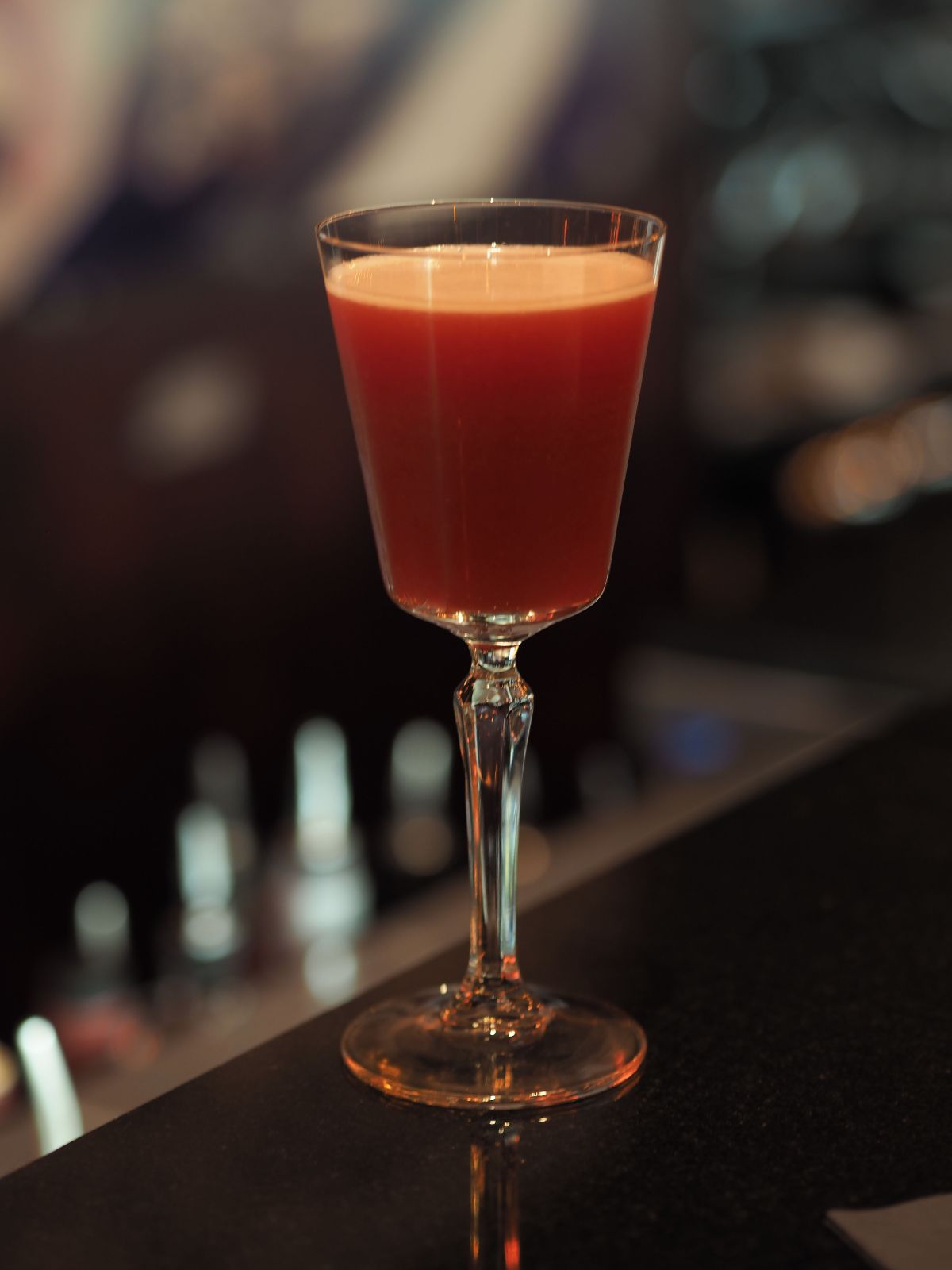 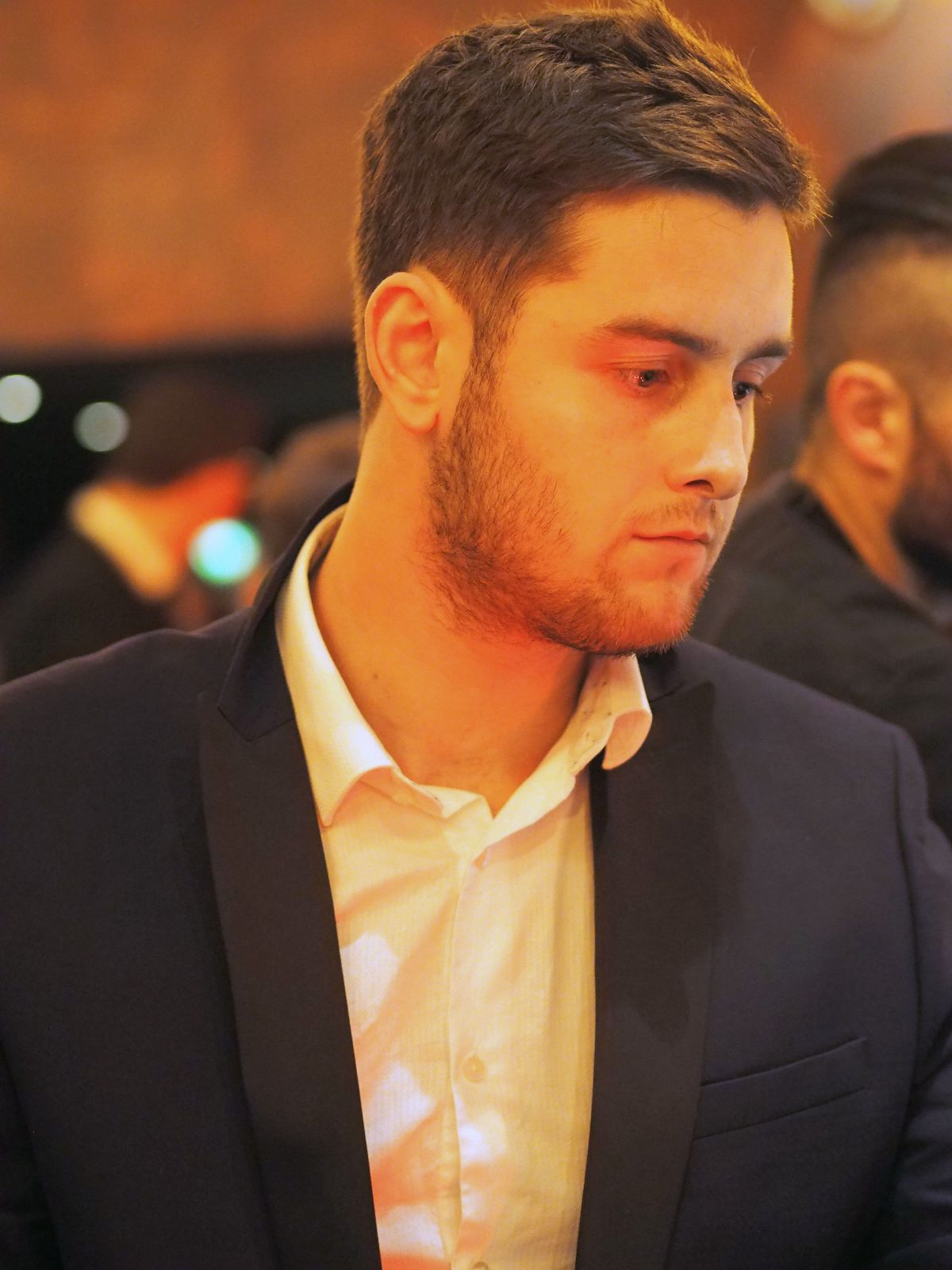 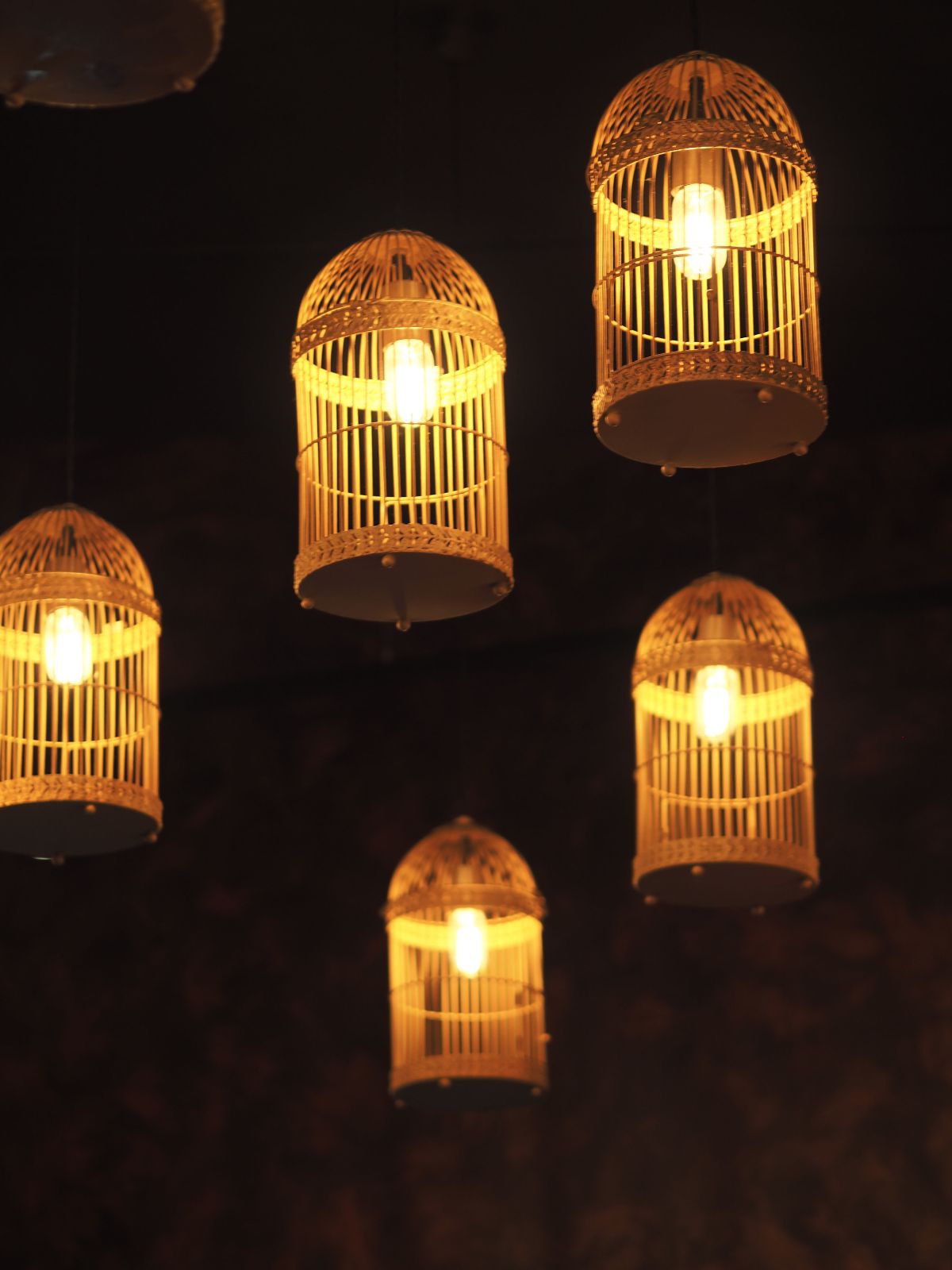 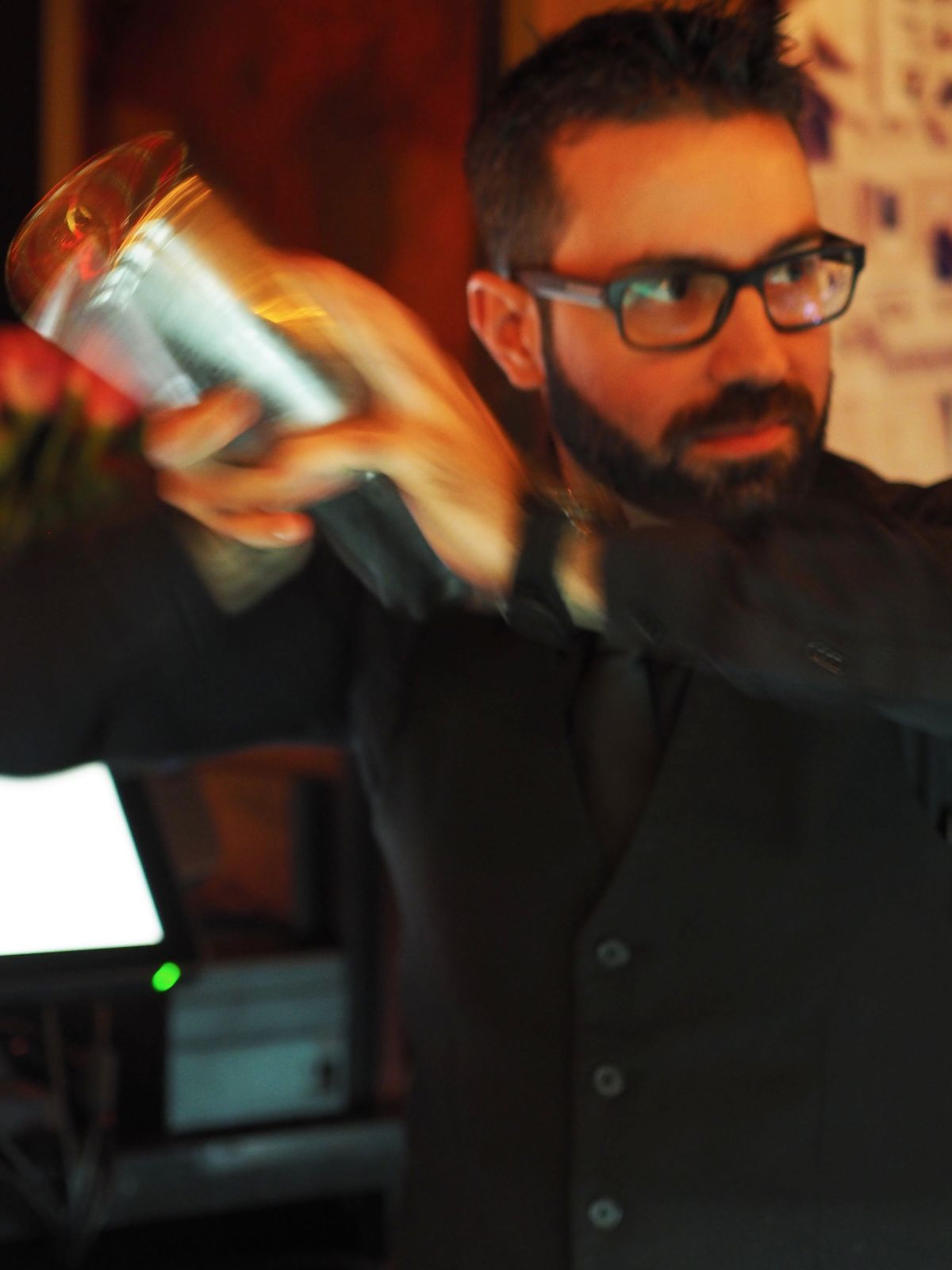 With a pan-Asian theme, Buddha Bar is renowned not only for their sushi but also their variety of unique and flavoursome dishes – a take on traditional favourites but with a twist. Crispy black cod and seafood wonton anyone?

After much deliberation and conferring (always the way with us two), we eventually settled on the spring rolls, a lamb satay and a chicken satay – accompanied by a Singapore Sling. Since our trip to Thailand earlier this year, both David and I haven’t actually had anything remotely similar to the food we had out there. But dare I say it, we really miss the creamy, coconut flavour that the cuisine provides. And so this was our indulgent fix. 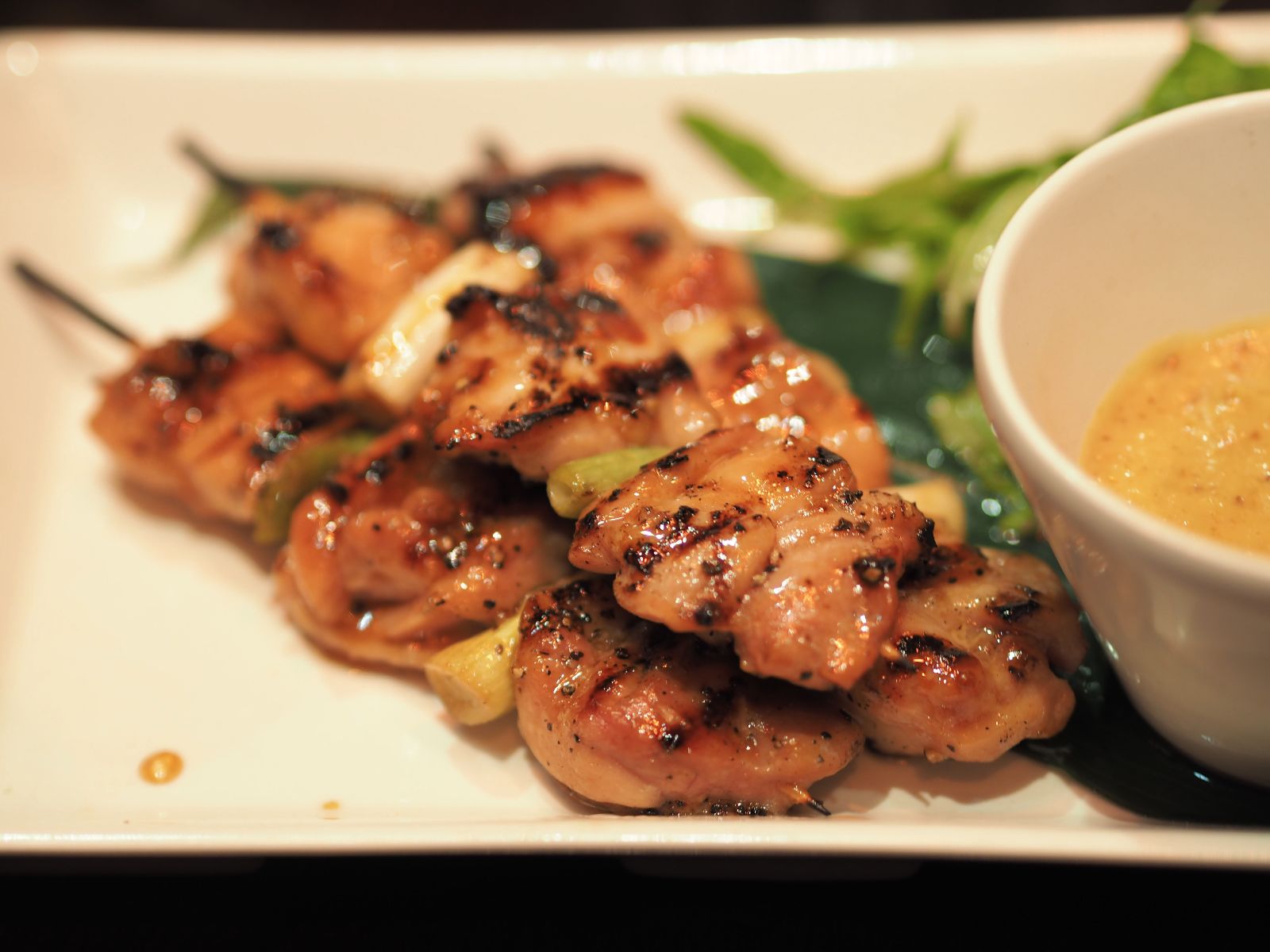 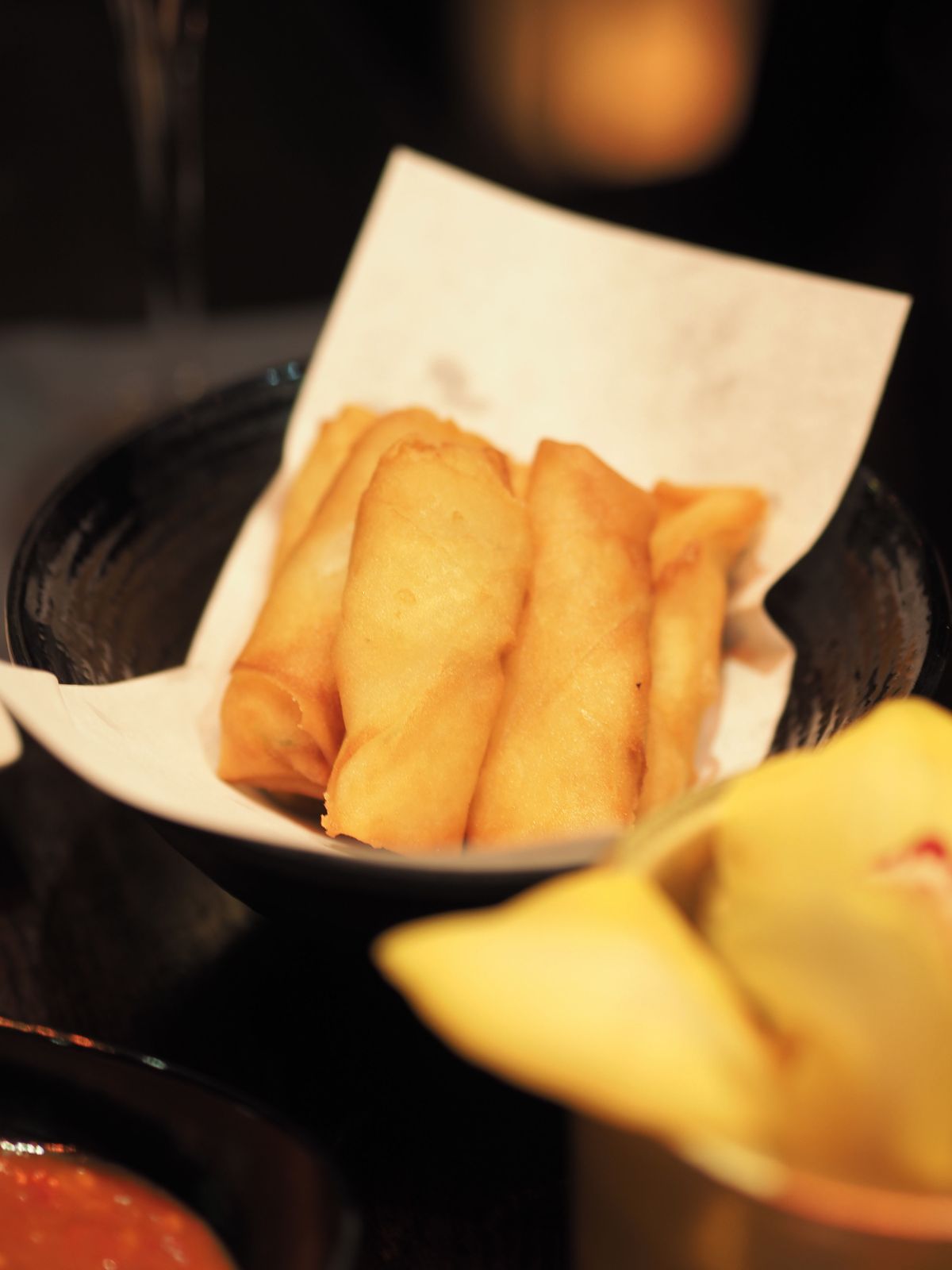 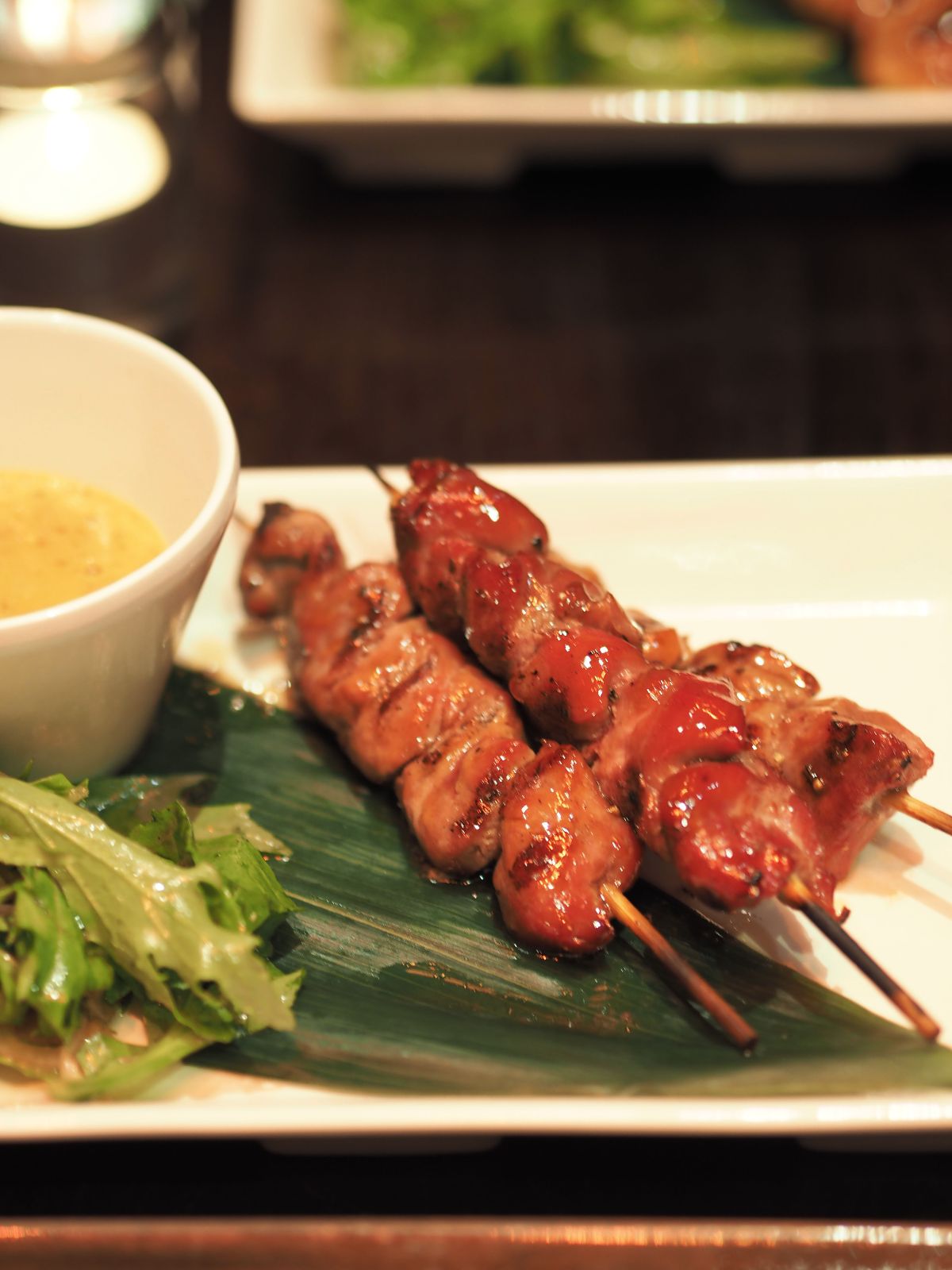 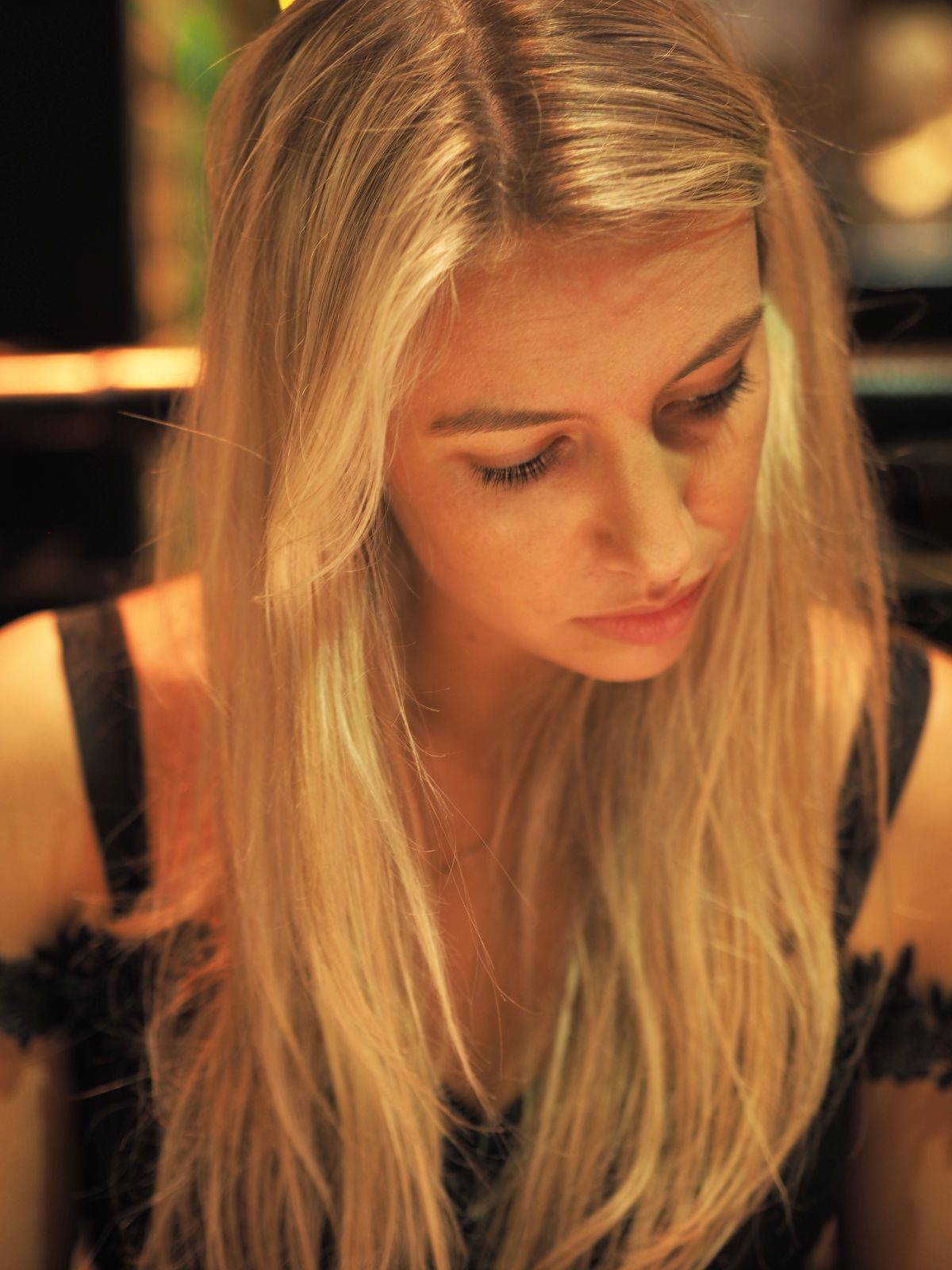 In fact, we both agreed that Buddha Bar’s version of traditional satay (with the meat marinated in a delicious sweet teriyaki style sauce) actually surpassed anything we ate while away. The chicken practically fell off the skewer it was so tender and when dipped into the gorgeously creamy sauce, it tasted out of this world. As a dairy-free eater, I usually don’t get to enjoy such decadent, delicious dishes – so this was a real treat.

Portion sizes are relatively generous in London terms, so we didn’t feel the need to over order in a bid to not leave hungry, however the richness of the flavour more than compensates for an on-the-small-side looking dish. Something worth bearing in mind. 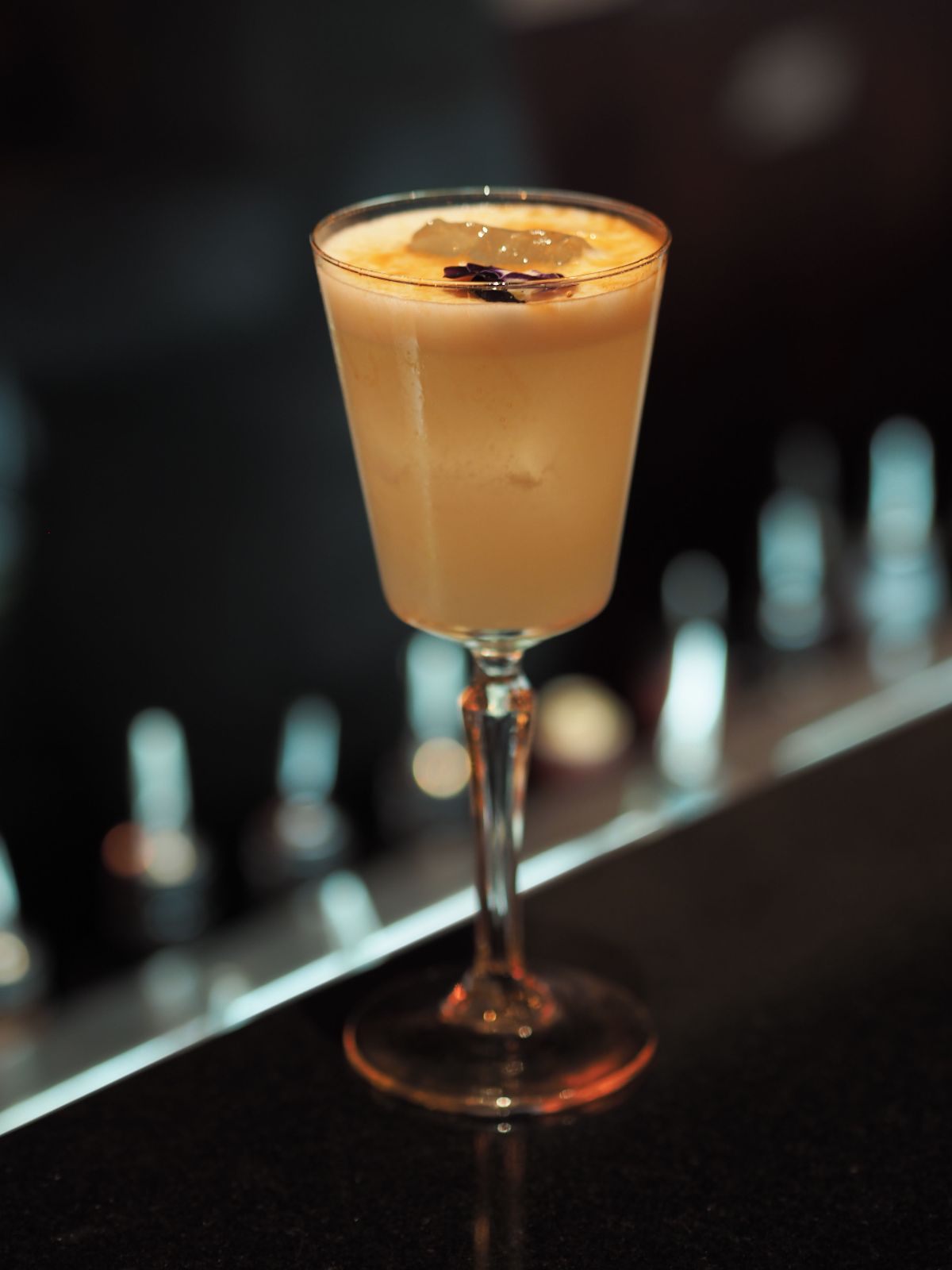 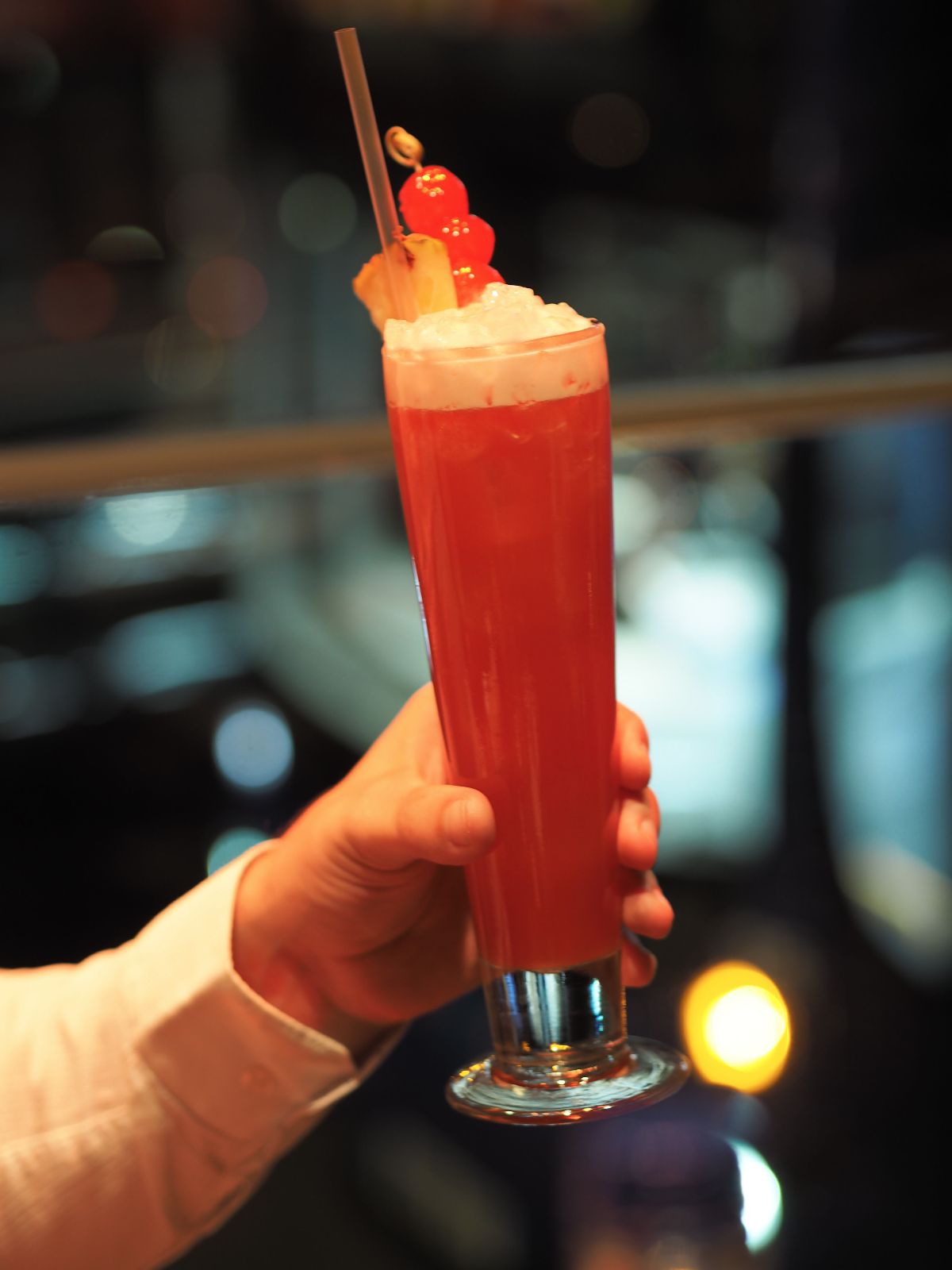 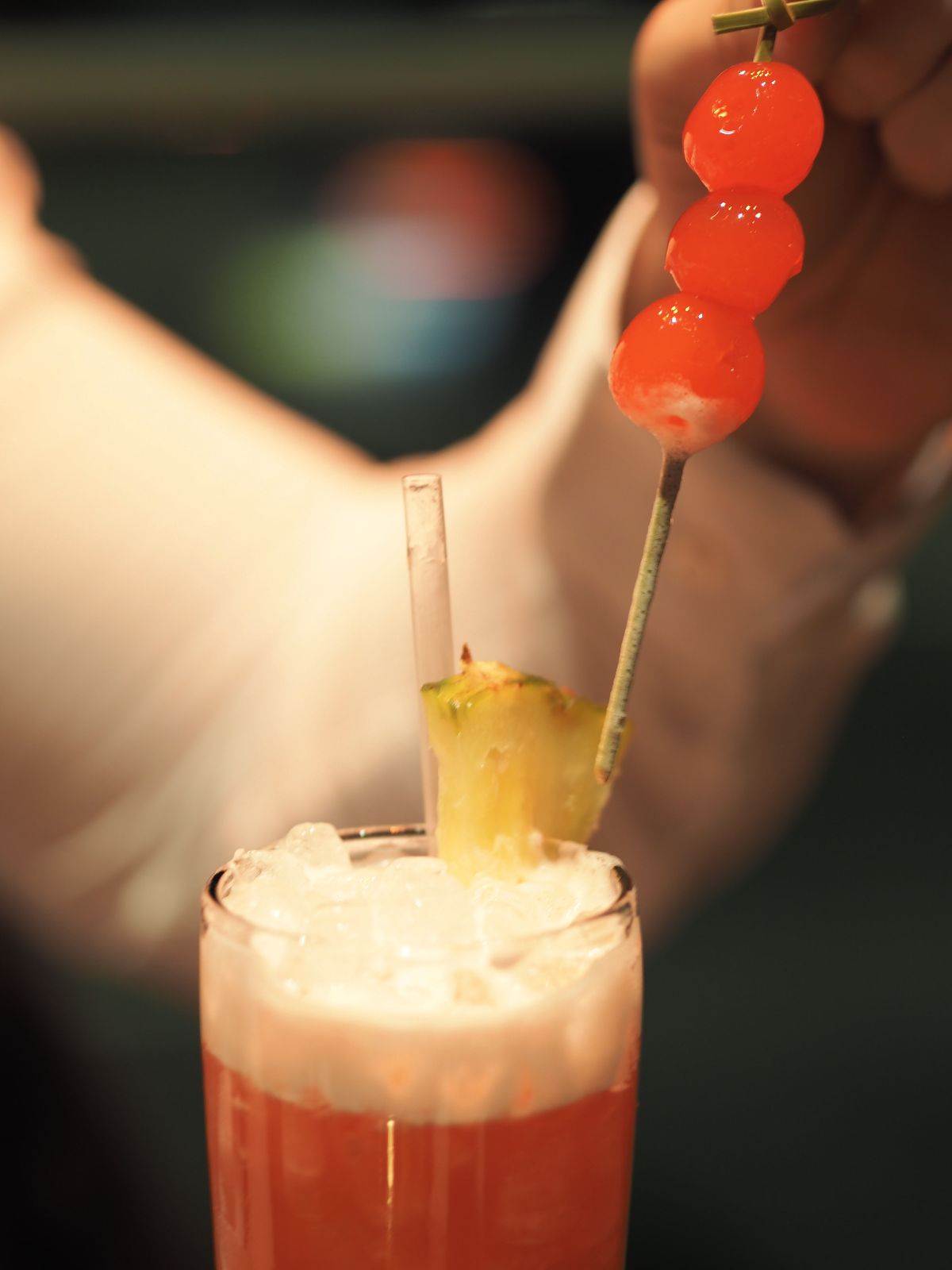 Soon after our starters disappeared (complete with many complimentary sounds of approval), our second course was seamlessly presented to the table, our drinks topped up unobtrusively without us even noticing.

I’d opted for the Roasted Black Cod with lemongrass miso – which if you’ve ever had black cod before, you’ll know is destined to be incredible. More meaty than regular cod (in fact, it’s closer to the texture of halibut), black cod has a rich, yet mellow flavour which lends itself incredibly to the sweet miso and mirin sauces of pan-Asian cuisine. Buddha Bar’s version didn’t disappoint in the slightest, with a deep elegant flavour and a melt-in-the-mouth texture that made you keep going back for more. I’m not an expert with chopsticks by any means, but it makes the dish last longer – so I used them on this occasion. Telling of how fabulous it was!

Alongside our cod, we also had a platter of grilled sweet potato with teriyaki and sesame – which was a unique take on the usual sweet potato fries favourite – but delicious nonetheless. 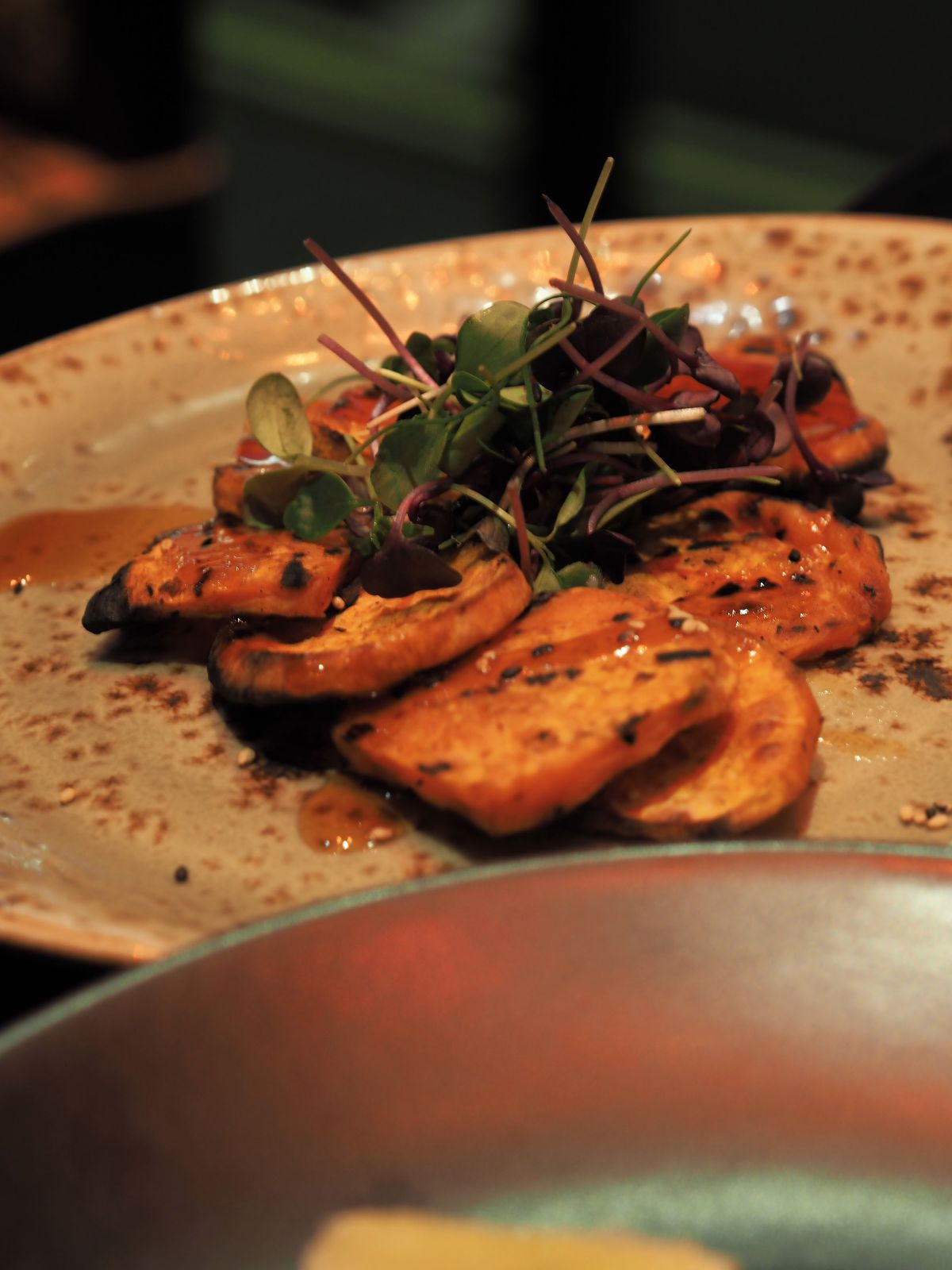 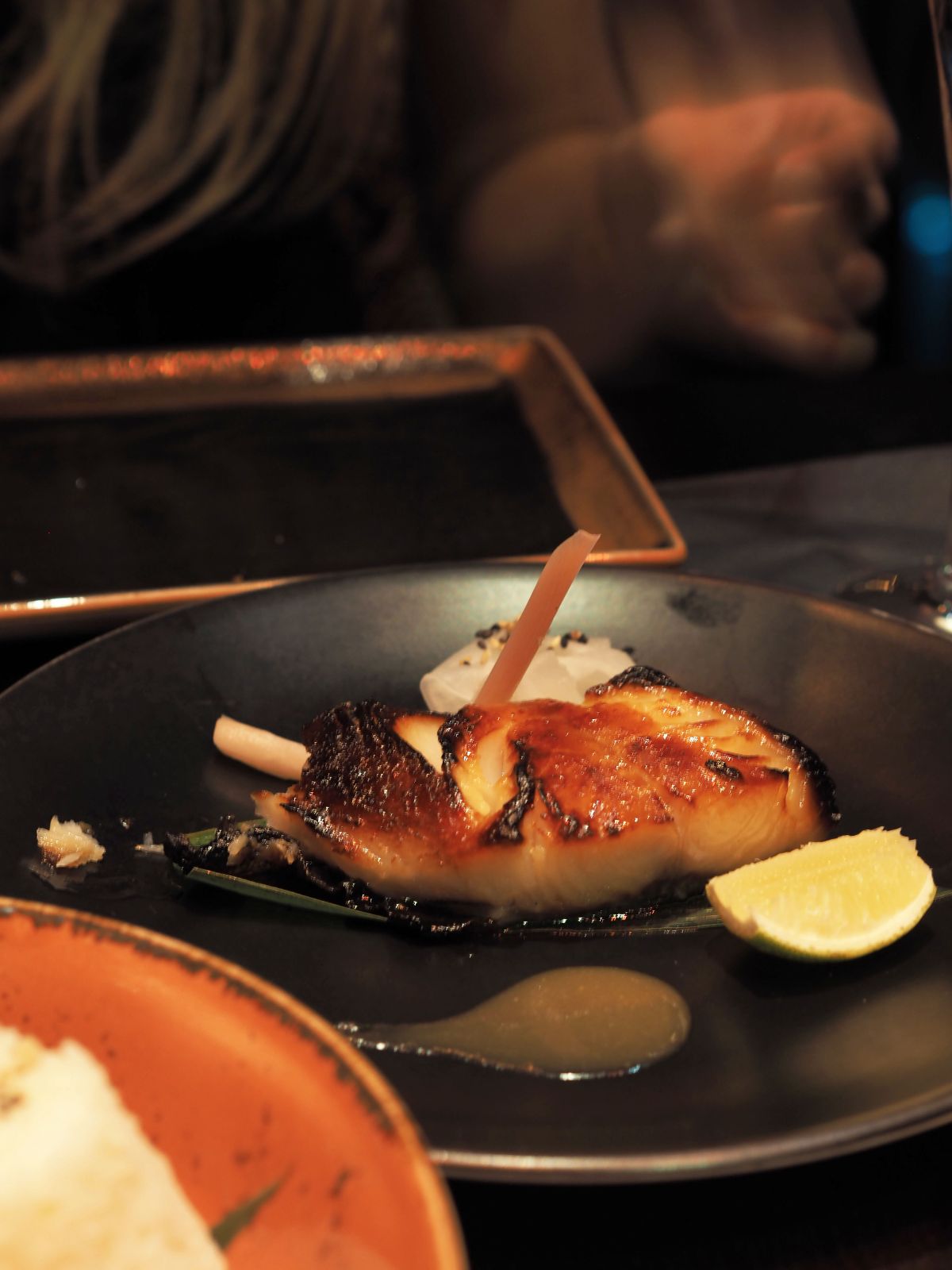 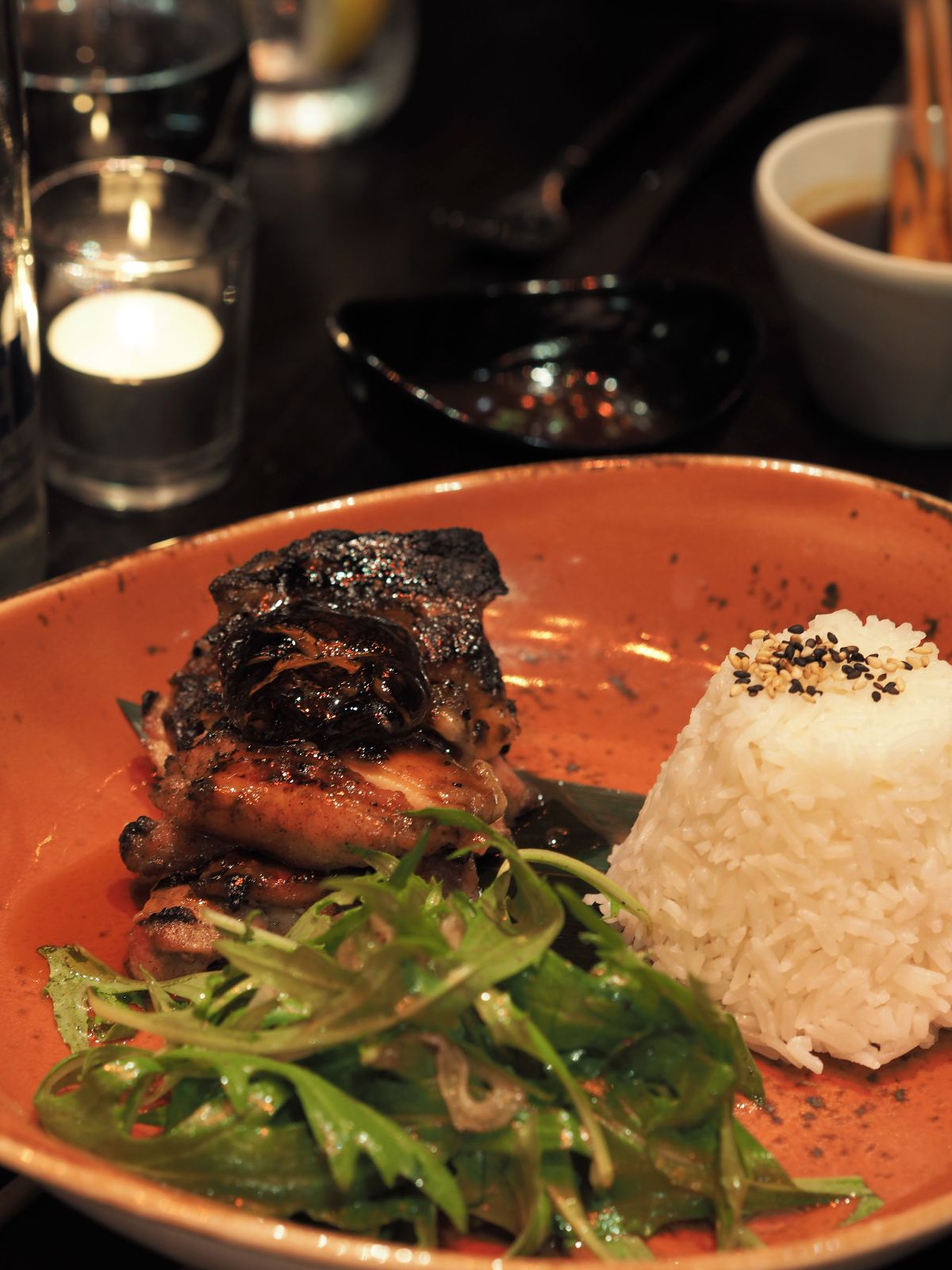 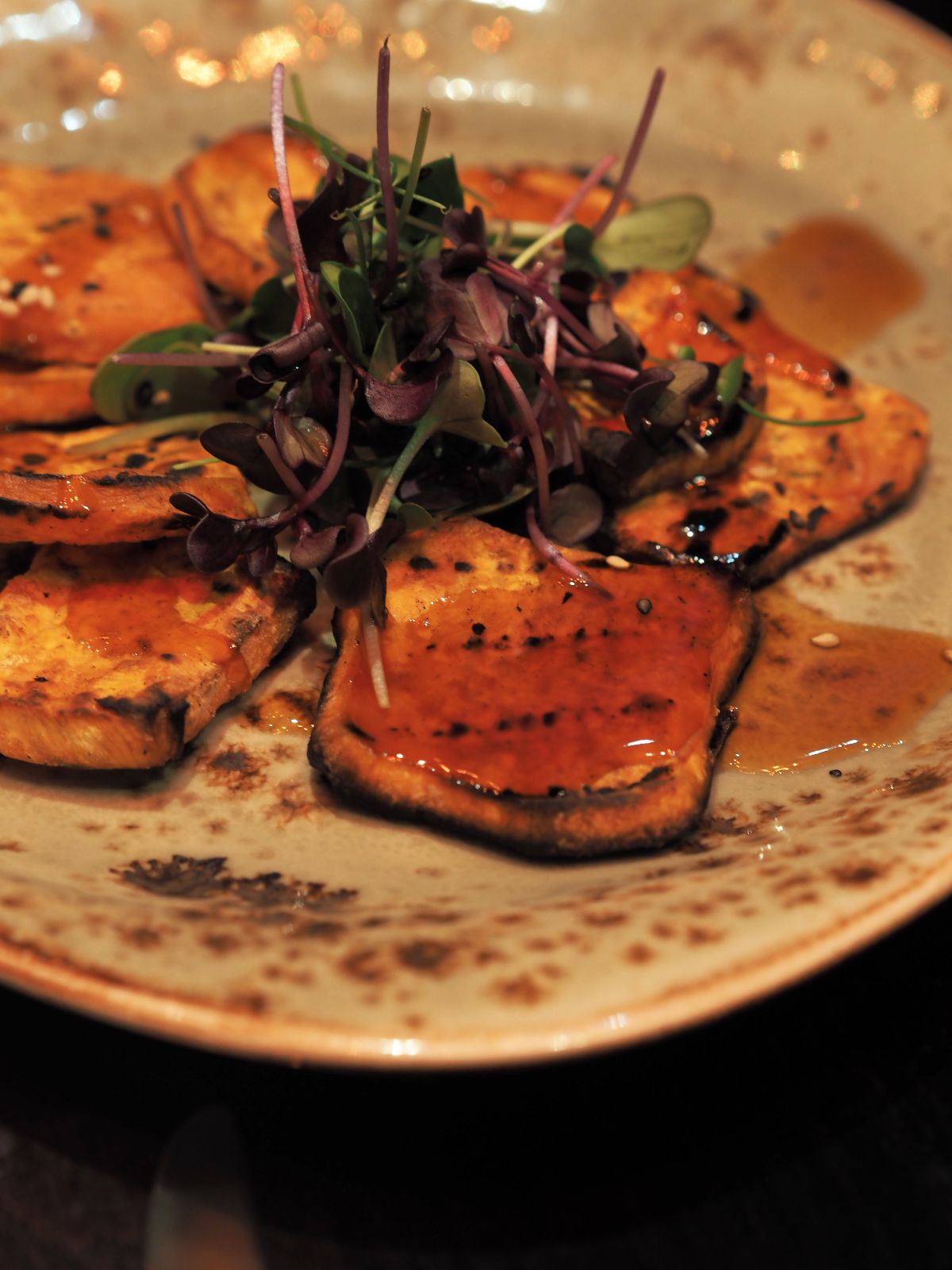 David chose the five spice barbecue chicken with teriyaki sauce and a mountain of rice. This actually tasted more like barbecued pork because it was so tender and juicy, so unfortunately for my poor boyfriend, I had my fair share of the dish too (despite consuming the majority of my own), we were almost tempted to order another portion.

But then, we spotted the dessert menu.

Usually pan-Asian desserts (sorry to generalise) aren’t overly exciting. They tend to feature mochi and fried bananas and not a lot else. Luckily, Buddha Bar bucked this trend.

I opted for a rather exotic fruit platter and sorbet, while David had a sweet treat display of salted caramel and vanilla mochi’s and a sesame seed, caramel and chocolate fondant stick with vanilla ice cream. I have to say, I was rather green eyed.

Apparently the fondant was more like a mix between a kit kat, a drift and a melt-in-the-middle chocolate pudding. Which in my opinion, sounds bloody incredible. Unfortunately for me, it had large helpings of dairy in, so I watched (and sniffed) from afar. I’m not sure the pictures quite do it justice, but David did say it was incredible. A rare food-related compliment.

We left feeling very full and a little giddy from all the deceptively fruity cocktails. Luckily the tube was only a short walk away, but we made plans to return as soon as we could…

Have you ever visited Buddha Bar – or do you think you will in the future? 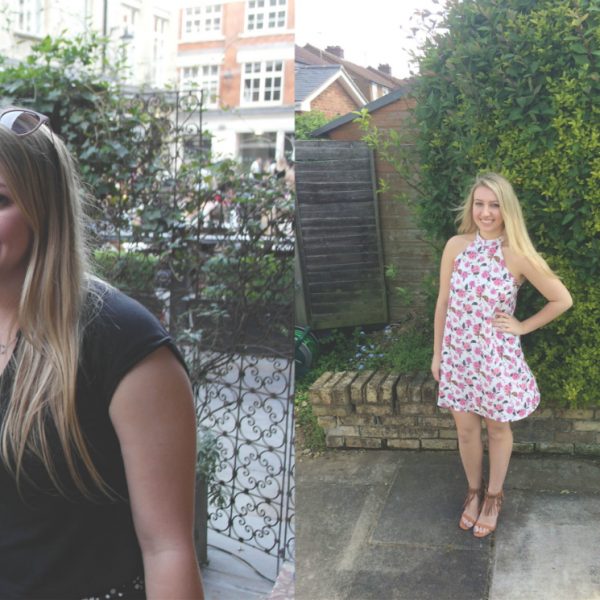 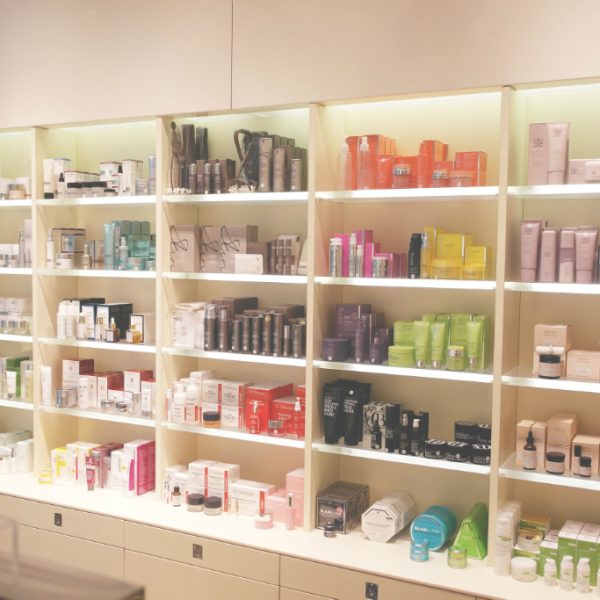