When I first found out that I had the opportunity to go to the new Candy Kittens Store on Kingly Street in London for an exclusive bloggers’ breakfast on behalf of Scarlett London, I was so excited! Who wouldn’t be!

For those of you who don’t know, Candy Kittens is a candy/fashion store intended for young girls. It was created by 22-year old Jamie Laing, who is known best for his appearance on the UK reality TV show, Made in Chelsea. As the heir of biscuit brand McVities, Jamie isn’t new to the world of candy, but has created a completely new way to shop for sweet treats, so I was intrigued to go along and find out more.

I arrived fairly early on the day of the breakfast, but was thankful to see there were already another two lovely bloggers, Sarah and Emily, waiting outside. Wrapped up in all our layers of scarves and coats, we chatted a little until one of the ‘Candy Kittens’ showed up wearing shiny, fuchsia leggings and the famous “I’m a Candy Kitten” t-shirt. She opened the door and let us in.

Upon entering the store, I was amazed at just how gorgeous it is! I’m telling you, you’ve never been in such a cute, fun shop – there is pink everywhere : the clothes, the chairs, stickers and logos on the wall, pink ribbons tied around gift boxes for decoration, pink lollipops, pink baubles for your Christmas tree…I swear it’s like every little girl’s fantasy home (I’d totally live there, even now). Not to mention how cute the clothes are; from soft, pink and blue pyjama bottoms to t-shirts in grey and fuchsia pink as well as white. The whole shop itself is like candy – pink and white only. 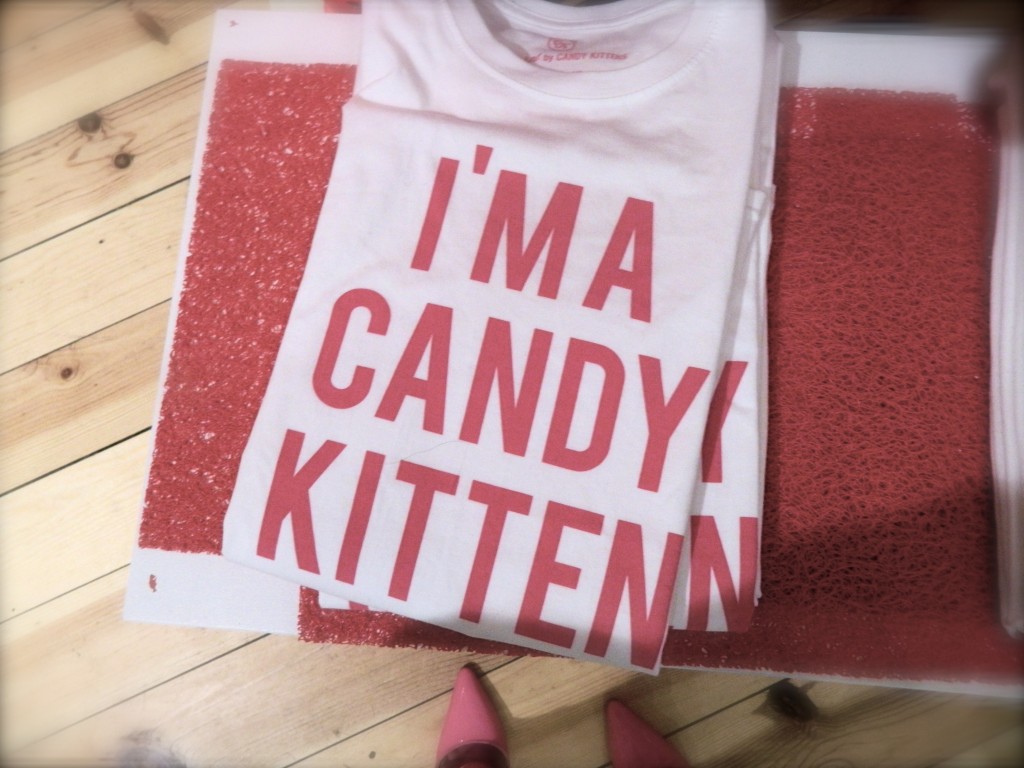 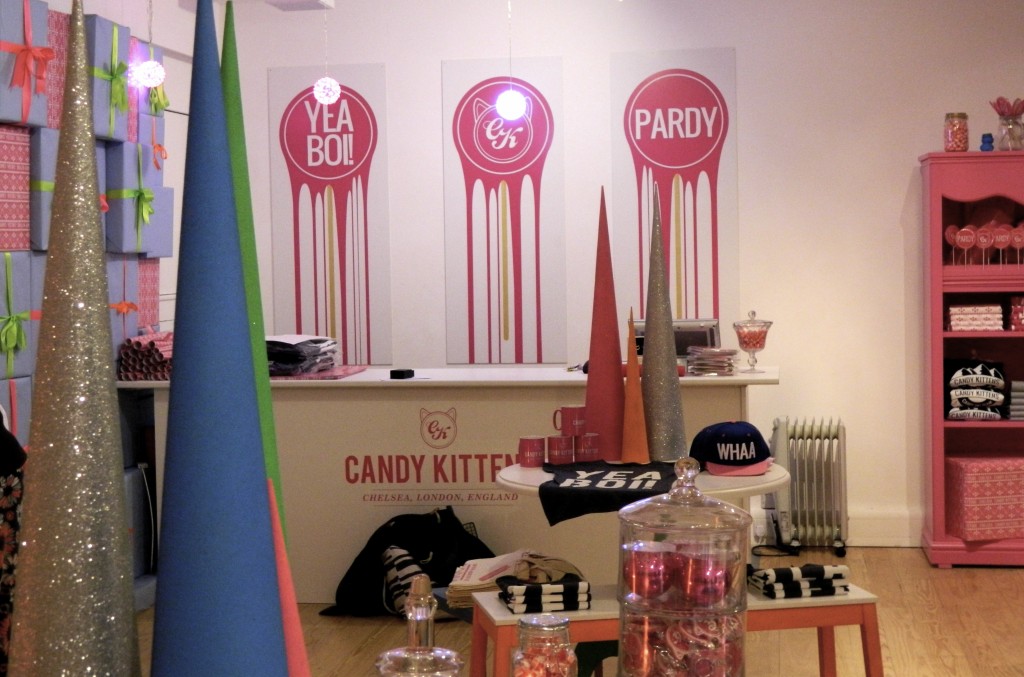 After composing myself from the initial ‘pink’ overdose, I had a look around, took some pictures, mingled and chatted as Jamie arrived with a couple of friends. One of them put on some Christmas tunes while the other brought out lots of juice, fruit salads, croissants as well as delightfully delicious muffins from Wraggamuffins !

I thought it would be fitting to wear my patent candy-pink Manolos Blahnik pumps to this event and upon speaking to Jamie, it turns out I was right – he told me he liked them (I almost died!!). I teamed them with with black Zara waxed pants, a Primark polka dotted blouse, a Marni statement necklace and my Alexander Wang studded bag. 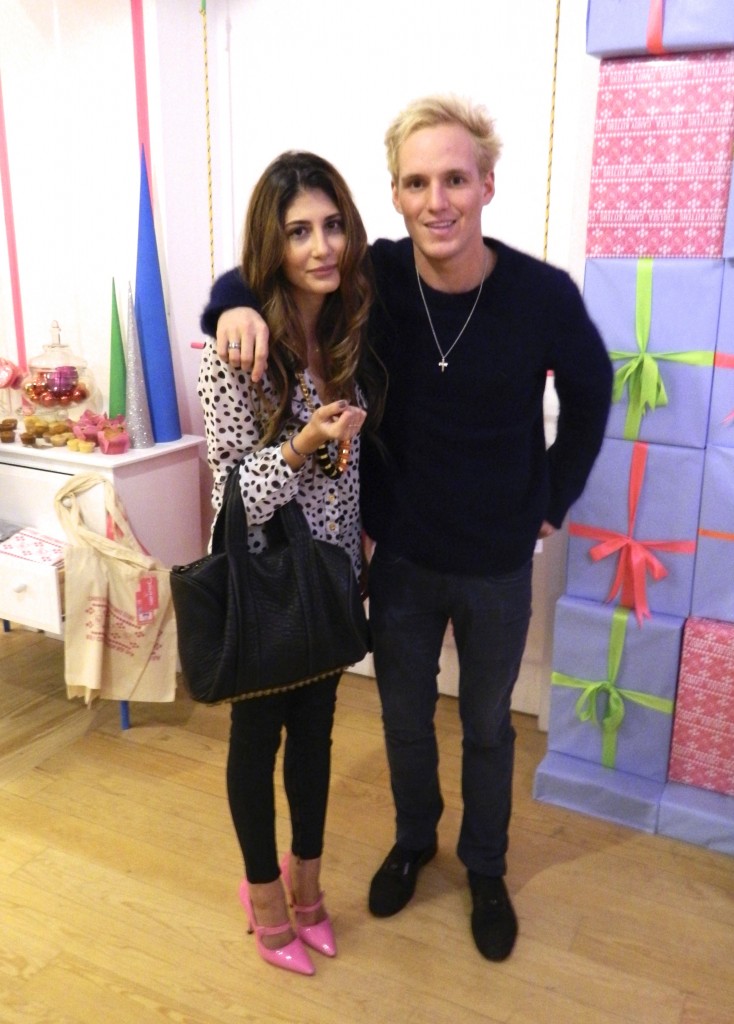 Above: Jamie Laing and I!

After grabbing something to drink, Jamie asked us what we wanted to do, so as we all started bombarding him with questions, we huddled around him and he told us all about how he started Candy Kittens. The idea behind the store (he said) is the combination of his three favourite things: sweets, fashion and girls (oh and pink, by the way!). He admitted his inspiration initially came from Abercrombie & Fitch and Victoria’s Secret (think ‘candy kittens’ instead of ‘angels’ !), where gorgeous young girls parade the store, look pretty and act as walking mannequins, as well as store assistants.

He told us his two idols were Hugh Hefner and Willy Wonka, and that he wanted to start a fun business of his own which would incoprate these two world renowned ‘legends’, something that would keep him young, and constantly surrounding by sweets! He made lots of jokes throughout and even gave us entrepreneurial tips (not to mention a little inside gossip about the Made in Chelsea crew and what goes on during filming scenes!). 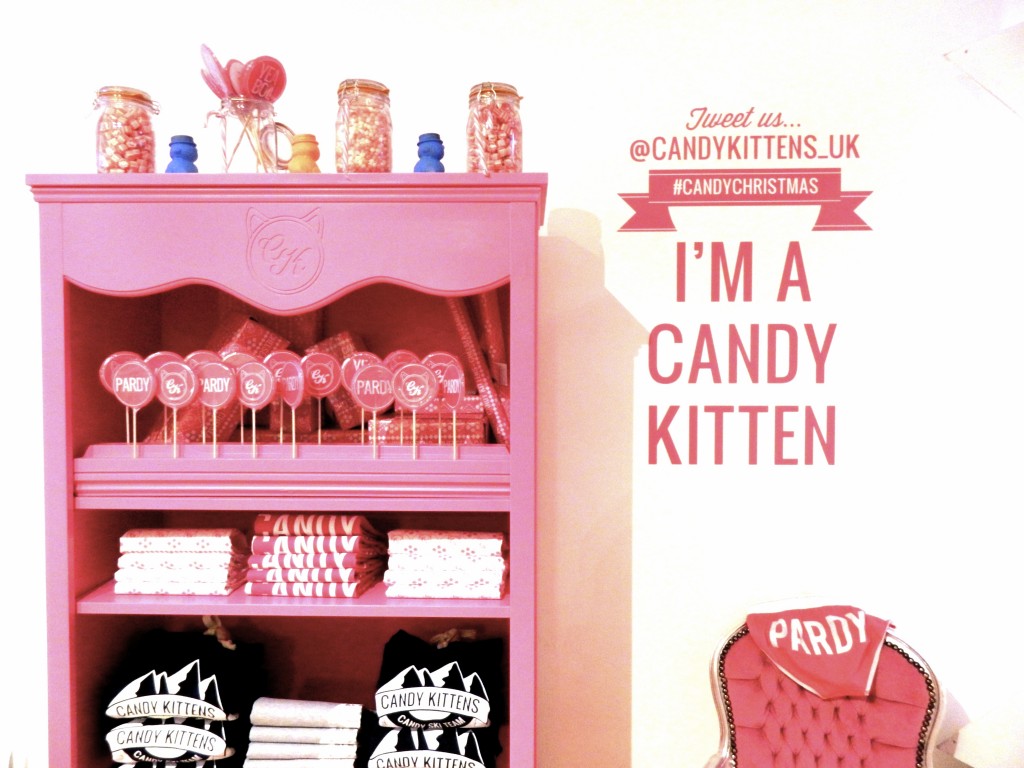 It was wonderful to listen to Jamie (and to be able to catch up on his gossip ‘off screen’) as he was so enthusiastic, answering each and every question we asked, taking lots of pictures with all of us and  insisting that we look around and have juice and snacks as we browsed the racks.

The majority of the store plays host to the clothing, which is a collection of gorgeous tops and sweaters, which all look really comfy (and well designed), each emblazoned with either ‘Candy Kittens’, ‘Pardy’ or Jamie’s favourite expression ‘Yea Boi’.

But that’s not all that Candy Kittens is or ever will be. Jamie Laing told us he has many plans for it, hoping to turn it into a gloval brand. He envisages a permanent shop, probably on King’s Road as it makes sense to be in the heart of Chelsea, and (dreaming big) he also wants a large slide with a ball pit to have inside the store (I guess this will be pink too!). In addition, taking inspiration from his trips to New York City when he was younger, he wants his shop to have a wide variety of Pick ‘n’ Mix candy, rivaling the sweet paradise that is Dylan’s Candy Bar and hopes to turn Candy Kittens into a franchise, eventually opening up a store in New York City, too. Sounds exciting! 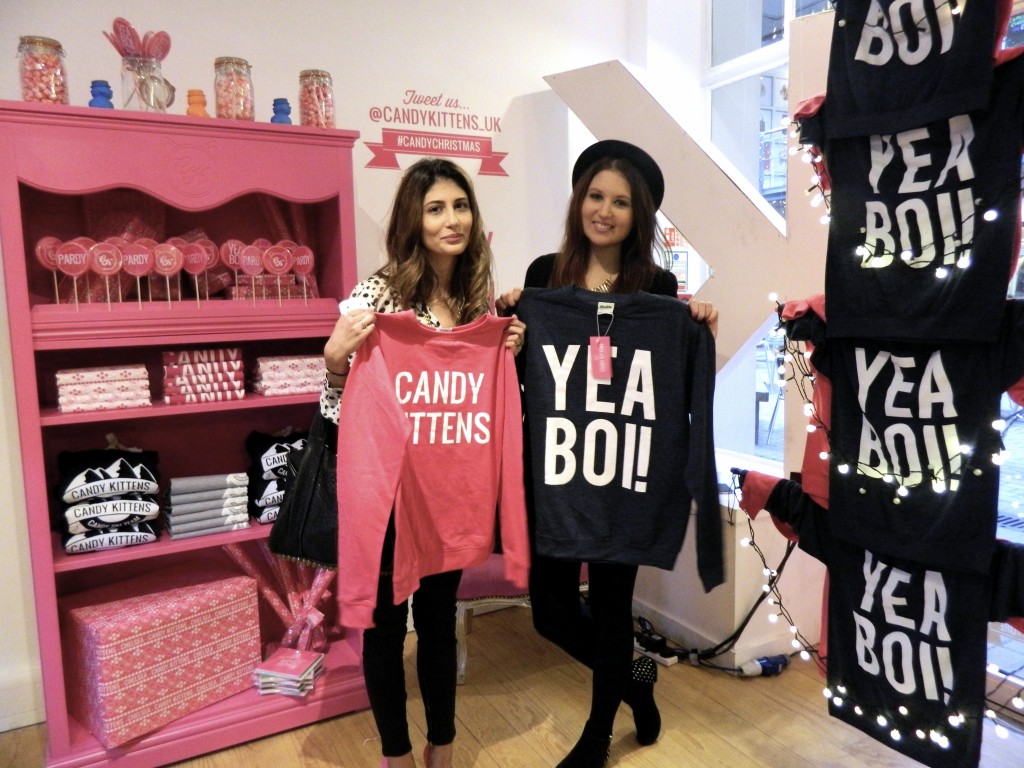 Above: Blogger Sarah and I have a look at some of the gorgeous jumpers currently available in the collection!

It was a fantastic opportunity to meet and chat with fellow bloggers and of course, Jamie Laing. I thought I was going to be rather starstruck and stunned for words when I met him, but he is actually so down-to-earth and sweet. He made us all feel really comfortable and the whole atmosphere was very friendly. We all tweeted, posted pics to Facebook, asked lots of questions, had some yummy juice and took snapshots of the pink candy heaven inside Candy Kittens!

Even though many bloggers traveled from around the UK and had to get up really early to be there at 8am, it was definitely worth it – we all had a fabulous time, leaving with a free top each (I went to pay for mine and didn’t realize until I was at the till that Jamie gave them to us for free!). Personally, I thought it was an exciting and wonderful start to my day and I can’t wait to return to the store in the future to see what Jamie has done! It’s definitely worth a visit if you’re a Jamie fan (as he regularly works in the shop and is there to meet and greet fans), or similarly, if you are a lover of pink! At the moment the store is only temporary, so if you want to visit, you’ll have to do so within the next few weeks, however I’m sure Jamie has plans to make it a permanent fixture very soon!

And just before I go, I’d like to quickly introduce myself; my name is Claudia, I’m a 20 year-old fashion blogger on Pink Manolos and the latest fashion writer of the Scarlett London team. 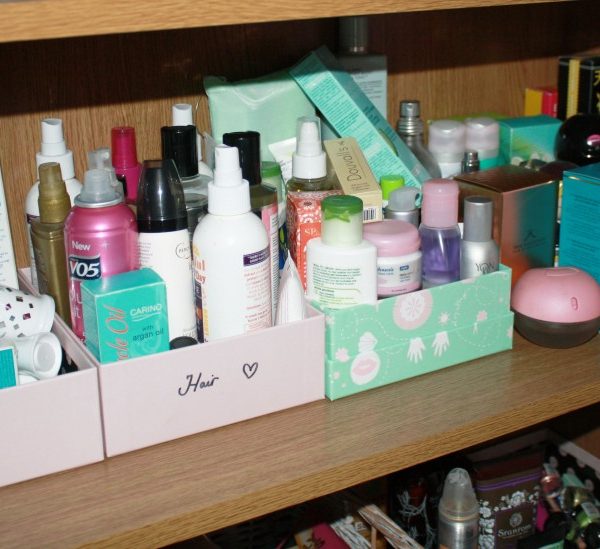 What I Wore – LFW 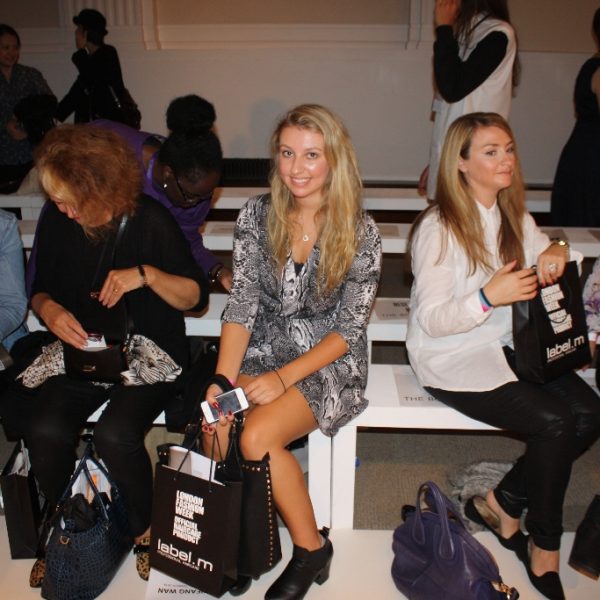 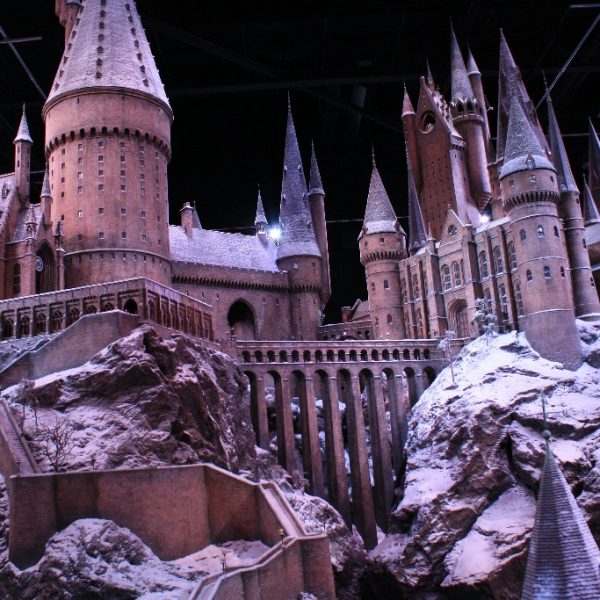