Just off the bustling streets of Leicester Square, you find a London district you might not have been in before. For starters, there’s no ‘I’ in DSTRKT, and if you take a walk down the dimmed stairway into the lounge feel restaurant, there is a team of chefs, bar staff and servers to take you to dining nirvana.

Leading the team of chefs at DSTRKT is George Yaneff, formerly of José Andrés’s Bazaar Restaurant in the SLS Hotel, Beverley Hills. They dedicate themselves to finding the best of British produce to create a modern menu of various cuisines. After dining, DSTRKT transforms into one of London’s club hotspots and has just won Best Club 2013 at The London Club and Bar Awards.

For all you Made In Chelsea fans, DSTRKT has made appearances as the setting of a number of scenes, including the recent date between Ashley and Josh when Ashley and Ollie had their most recent ridiculous and unnecessary argument.

The multi-level restaurant begins with the bar area, with a gorgeous wine rack covering the entire left wall as you walk in. The tables are then situated on a series of levels and the open kitchen lies at the bottom of the restaurant. I have often found open-kitchens in restaurants to be rather off-putting, sometimes very noisy and can distract from your evening, this was far from the case in DSTRKT.  The right hand wall is covered by black drapes, which after dining,  are pulled back to reveal ceiling to floor glass windows of a view into the club.

The ambience of a restaurant is often the deciding factor for me. I have eaten in many places where I have found the food to be outstanding, yet I was unable to enjoy the meal due to the atmosphere found in the restaurant. I usually know by the time I’ve sat down whether I’m going to leave having enjoyed my evening. You must accommodate for your own preferences when eating out in London, and if the darkened room and multi-level layout of the restaurant does not appeal to you, perhaps you will not experience DSTRKT the way I have. The ambience of DSTRKT is one I have not come across before. The darkened surroundings provide a subtly sophisticated touch to the atmosphere, whilst remaining modern and comfortable. In this writer’s opinion, it is the food of fine dining without stifling formality. From the multi- level décor to the light ornaments hanging from the ceiling, to the open-plan kitchen, DSTRKT’s entire mood suited me perfectly.

My experience consisted of a taster of the Spring menu currently on offer at DSTRKT. This gave me the chance to experience the full variety of tastes and techniques used by the chefs, which was fantastic. Their menu is exclusive to native ingredients from British produce.  I was pleasantly surprised when I saw the spring menu. From Oysters to Cornwall River Wild Sea Trout to Ostrich skewers, this menu was a treat from start to finish. Starting with Oysters with osetra caviar and Watermelon with tomato and fennel and ouzo dressing which were both light and undoubtedly fresh. But the watermelon was fairly unexciting and so it was the next courses that kick started my taste buds.

Yellowfin tuna with soy air and avocado mousse and Razor Clam with tomato cocktail sauce. These two dishes were delicious, the tuna was cooked beautifully and the tomato cocktail sauce that was served with the clam was extraordinary. The vegetables in the sauce provided a crunch that with the tenderness of the clam was wonderful.  A particular highlight of the meal for me were the Osterich skewers, served with guiness mustard. All of the seafood and meats served were cooked to perfection, and so it is difficult to criticise on any of these dishes. However, we found the Lamb Cutlets that were served to be lacking a certain amount of flavouring and whilst they were beautifully cooked, there was something missing. The vegetables were expertly seasoned and harboured a perfect crunch texture. The desert, chocolate soil and strawberry mousse, is enough to take anyone’s fancy. The chocolate soil is light yet rich in flavour, avoiding any risk of a half eaten desert as all too often occurs when we find a desert too rich or too heavy after the previous courses. The perfect satisfaction for your sweet craving.

I chose cocktails to accompany the taster menu, as I am constantly searching for new cocktails to please and surprise me, and DSTRKT did exactly that. I can say in all confidence I have tried my share of cocktails and sat at my share of cocktail bars. The genius currently working as head barman in DSTRKT, who was recently nominated for London’s Best Barman, has concocted a menu of cocktail delight which hatches from his dedication to taste. Whilst speaking to him, he noted how some of the recipes are relatively simple, but it is finding the right flavours to combine that makes a cocktail special. And when I fell in love with one of his creations, Making Waves, I knew exactly what he meant. A combination of rum, lychee liqueur, raspberries, pineapple and orange bitters, this really was heaven in a gorgeous glass. Many cocktail bars woo with their focus on flare, and the taste of their cocktails often falls short as a result. But if you’re looking for a more relaxed atmosphere and appreciate discovering new tastes, DTSRKT should be the first stop on your night.

The expert chefs have been busy creating their summer menu and we were told that fruit would be a key factor in the summer menu. If the spring menu is anything to go by, I would say the summer diners are in for a treat. There is also a summer cocktail menu to accompany the new taste sensations and my summer will not be complete without a visit to try these.

For me, a shining highlight of DSTRKT is the innovation and creation that beams out of the establishment. From the bar menu to the restaurant menu, the effort and passion for creation is pouring out and their strive for greatness is reflected in the unique tastes.

The cherry on top of any dining experience is the service you receive. From the moment we set foot on the carpet lining the entrance to DSTRKT, we were guided down into the restaurant and to our table. The service was impeccable through the entire evening, our servers were perfectly attentive and extremely friendly.

I was lucky enough to go into the club following my meal, where Sean Paul was making an appearance the very same night. Drinking from cute tumblers, the club was – in loss of a better word – packed, and this was a Wednesday night. With a large section dedicated to VIP seating, if you’re not planning on dancing, you may find yourself constantly avoiding those moving around you and so for my own tastes, I fancy DSTRKT as a bar and restaurant more so.

I promised to be honest and try to accommodate this review for the audience I am writing for. So if you’re a London-lover, who thrives from the city lifestyle, but you don’t have the budget for it, DSTRKT is not going to be your regular. You’re in central London and you pay for the high quality service and food standard I believe is served in DSTRKT. Having said this, it is far from unreasonable in terms of pricing and if you’re looking to mark a special occasion, put this on your list. They offer a taster menu, which allows you to try a number of the dishes accompanied by wine or cocktails, both personalised to the tastes of the dishes. The taster menu starts at £40 per person including a glass of champagne/wine or a cocktail.  A perfect spot for a young couple wanting to splash out for the evening on a meal, or if you’re with the girls for a night out and want a stylish spot to have drinks in a relaxing lounge. The cocktails are priced just as you would find them in any London cocktail bar, but the menu is far from what I have seen elsewhere.

I will not deny to having been surprised at the impeccable standards of cooking and food creations found in what I expected to be a trendy London spot for nightlife. So it is perhaps my main concern that the people who come to DSTRKT don’t come to eat, or even to try the inventive beverages on offer. I feel it would be a shame for the establishment of DSTRKT as a nightclub to overshadow its accomplishments as a dining experience, as down the dark stairway in Piccadilly Circus are some of the greatest chefs in London. 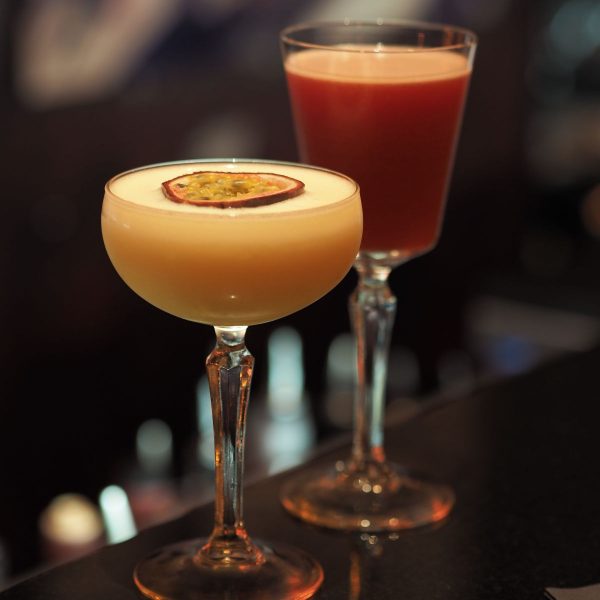