I don’t think I’ve explored it in too much depth (just yet) on my blog, but over the past few months – my skincare routine and the products I use on a daily basis to cleanse, tone and moisturise – have all been put into the spotlight. About four months ago, I hit a really bad point with my skin. Three years of being plagued by annoying dryness and rosacea – and I’d had enough. I was fed up of not being able to hide the annoying acne like red dots under even the heaviest foundation – for it only dried up after a few hours to reveal a flakey mess.

As much as I probably hid it pretty well, I was always conscious of how my skin looked and it started to make a dent in my confidence.

So I researched online, I visited five different dermatologists, I had laser therapy, I swapped up my skincare routine and I read endless books about ingredients and what effects they can have. Like my IBS, I always take a pro-active approach and tried my best to take control of the problem.

However, everything I tried failed. And I was left with this annoying dryness and red, very angry looking skin.

I decided to go back to basics. I started again – and threw out all of my fussy skincare items. Those with the fancy sounding ingredients and various ‘acid peel’ promises. I went back to the brand I’d used since my teens. In fact, the only brand I’d used while growing up – Simple.

My mum introduced me to the brand aged 13 (because like her, I had sensitive skin) and until the age of 19, I didn’t change things up once. I was one of the ‘lucky ones’ who never got spots or oily t-zones. It was only aged 20 (annoyingly) that my skin started to rear it’s ugly head, coincidentally when I’d started to use a barrage of new products that my exciting new blogging career had presented to me.

I’ve always loved the premise of the brand – that there’s no other complicated ingredients, harsh chemicals or fragrances – it’s just plain and simple. And to be honest, I’m not sure why I ever strayed away. I think the allure of fancy packaging did get to me initially – but there’s nothing like the aesthetic of skin that feels healthy!

Anyway, so the last four months have seen me strip back my complicated skincare routine and go back to basics. And the results have blown me away. Honestly, without sounding ridiculously over the top – I was astounded at how a few changes improved my skin drastically. Long gone are the days of not being able to wear foundation – I’m now experimenting with so many different make-up looks to celebrate!

Since my last visit to the Simple aisle, the brand have launched a number of new products – which of course, I was eager to try out for myself! These included the Dual Effect Eye Make-Up Remover and the Hydrating Cleansing Oil. Since they are brand new releases, Simple challenged me to try out the two on my blog – putting them to the test with two different make-up looks! 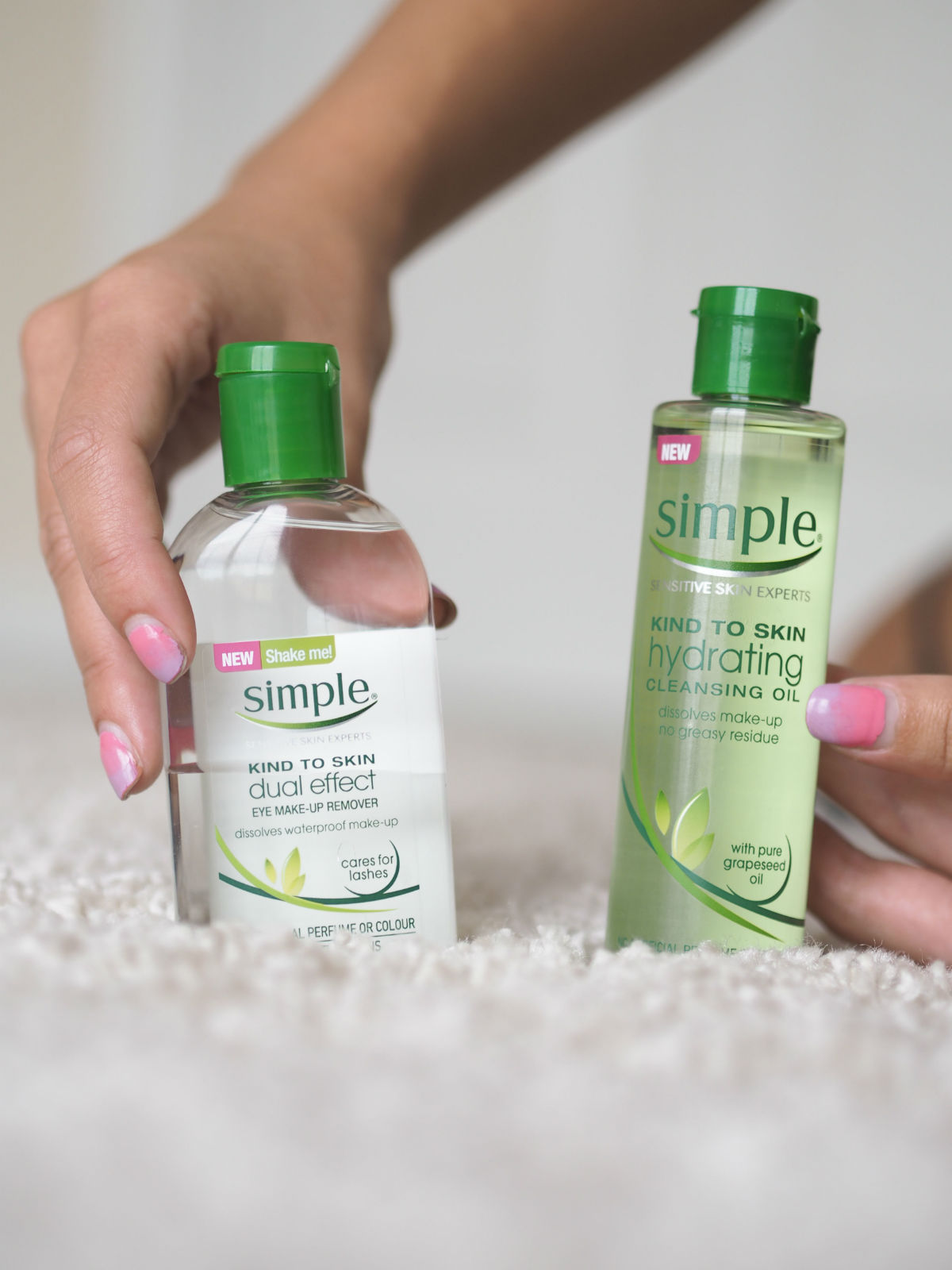 Now I tend to keep my make-up rather neutral the majority of the time, so to switch things up and really put these products to the test, I thought I’d pack them for two different trips that required a heavier make-up look. A shoot on the beautiful island of Hvar in Croatia (more on that another time) and a jam-packed day at the shows at London Fashion Week. Both occasions where I’d need something a little jazzier than my ‘every day look’ – but of course, still in keeping with my fairly low key style.

First up was my trip to Hvar, where the weather was far hotter than I’d expected. I created a humidity proof base layer, using skin illuminating foundation (with the all important SPF 15), lashings of highlighting powder and a glossy pink lip. We were shooting at a gorgeous all white beach club just down the road from our hotel, so I wanted it to feel girly, beachy and fun. 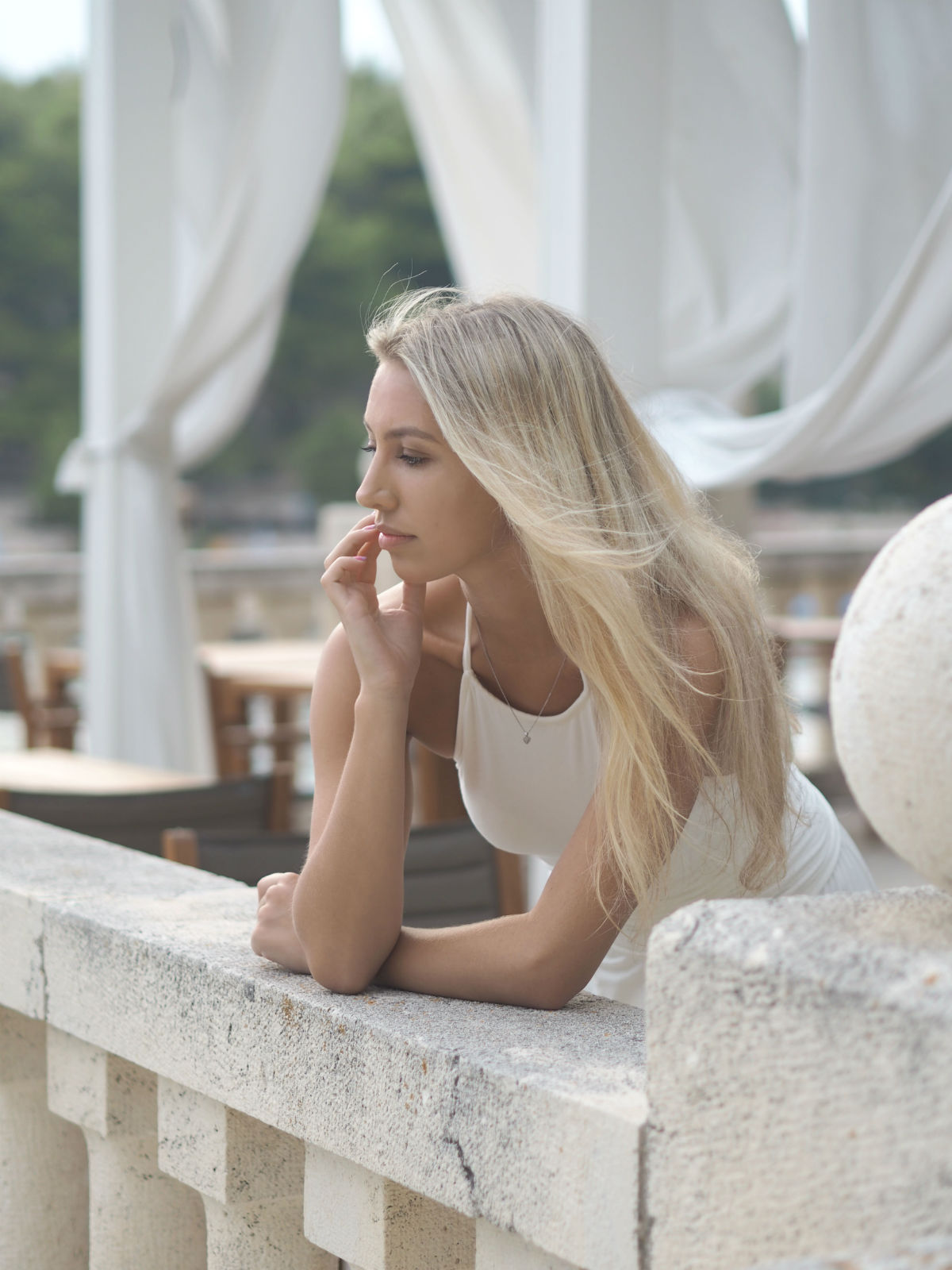 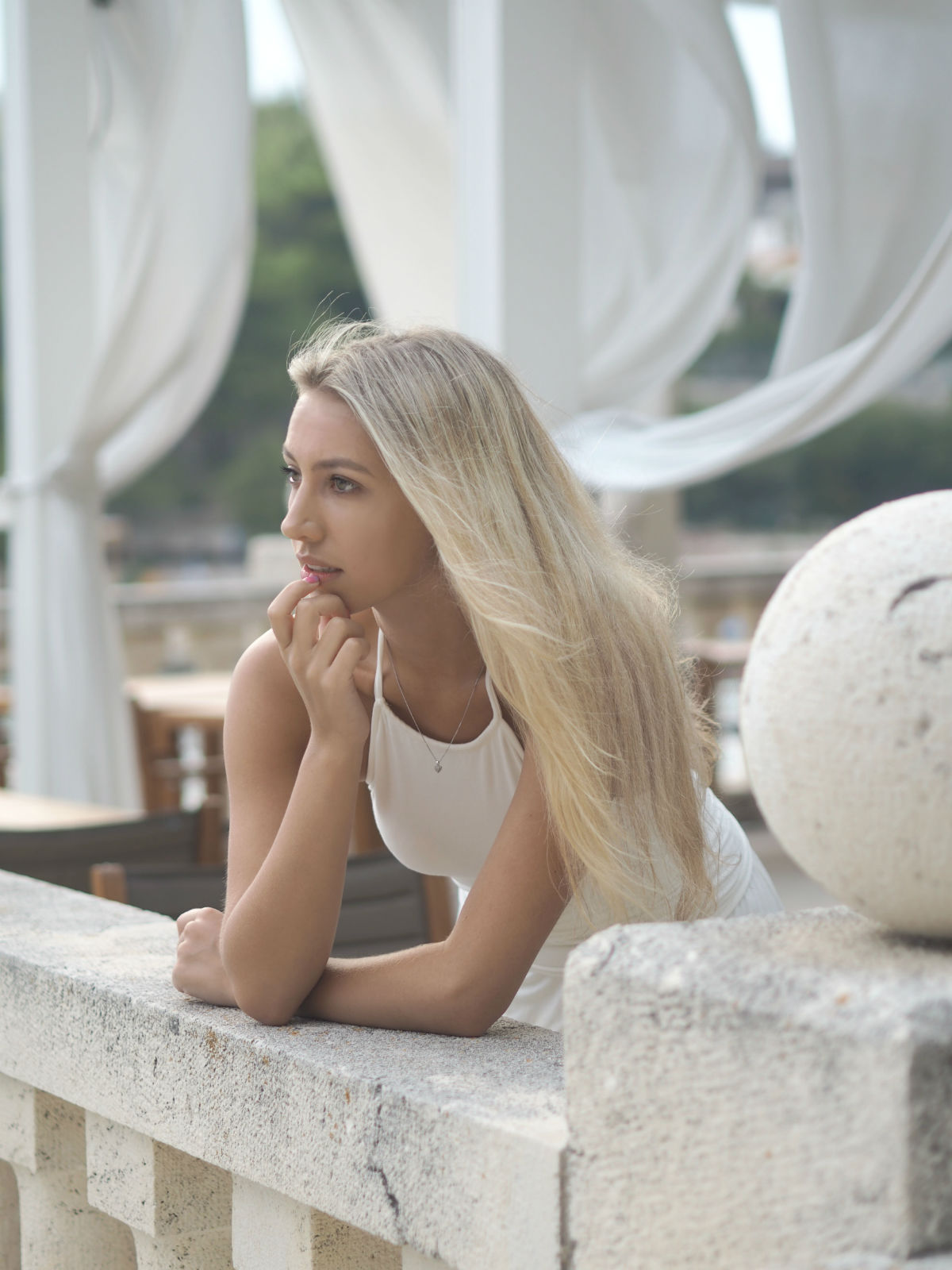 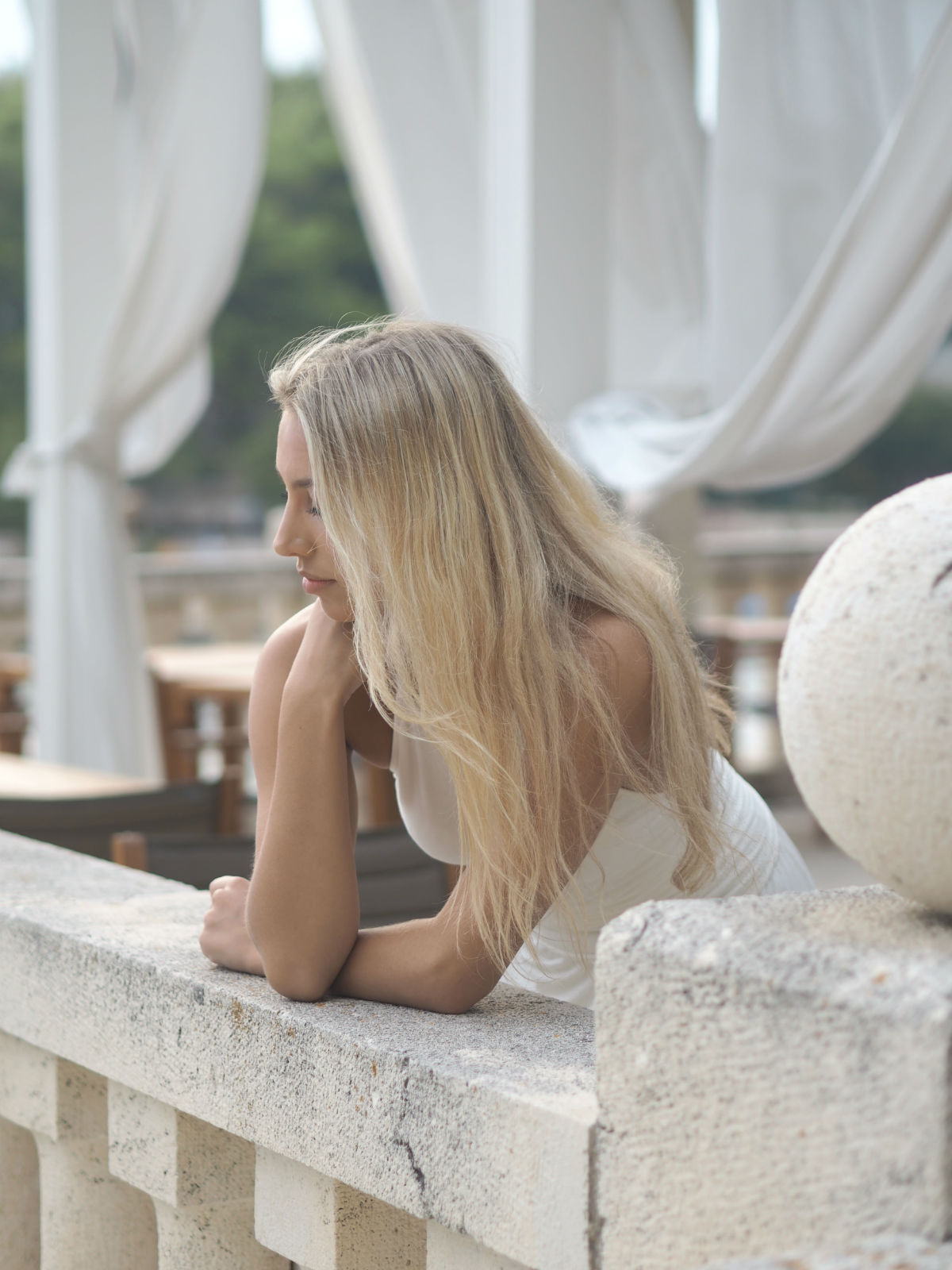 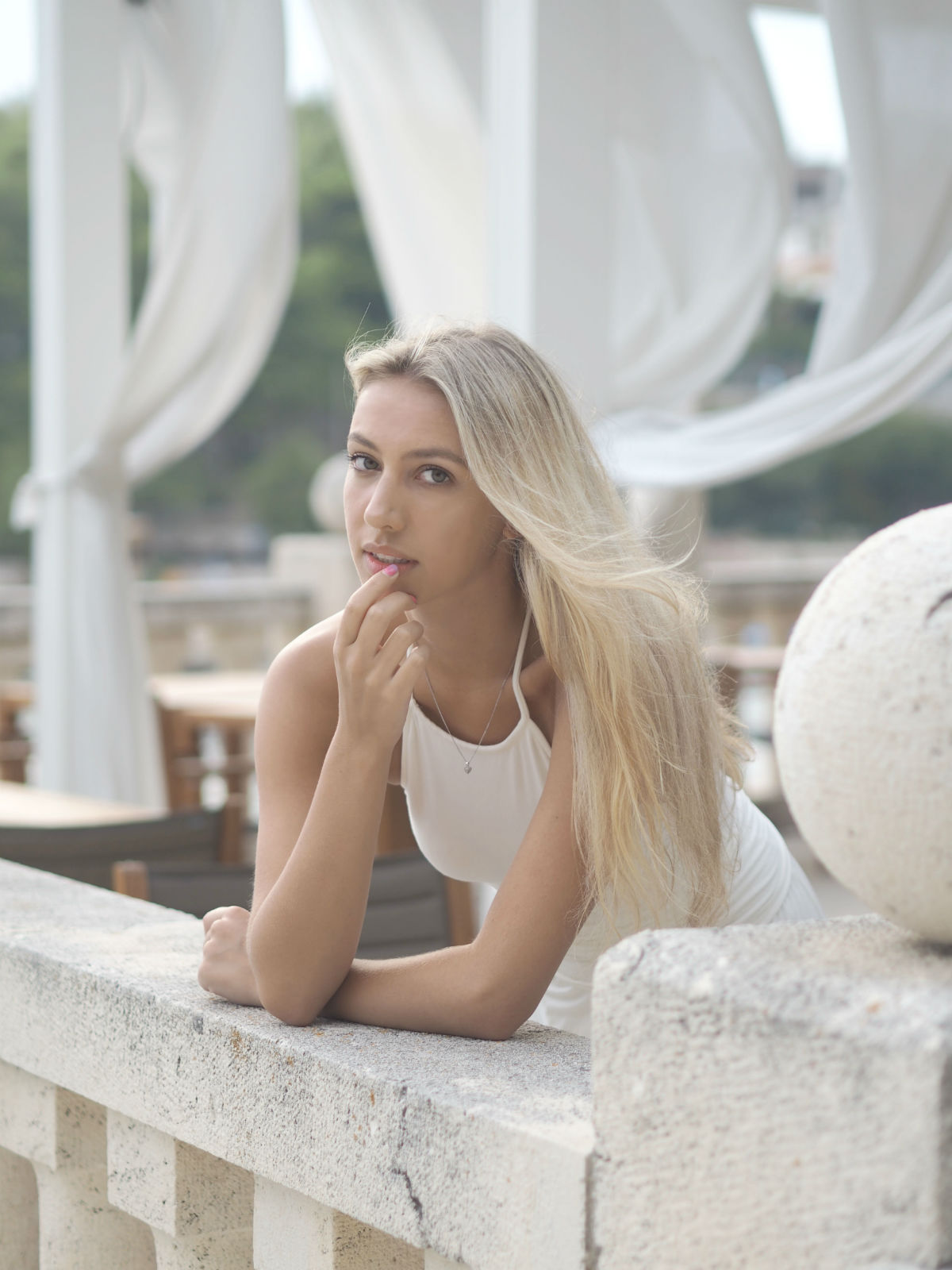 We headed straight from the shoot to dinner, before then returning to our hotel – where I tried out the Hydrating Cleansing Oil first. As Simple’s purest wash-off cleanser (with 100% grape seed oil), the oil is very light in texture and leaves your skin feeling silky soft.

I squirt a ten pence piece sized amount onto the palm of my hand, rub together to warm it up a little – before then circling it onto my face. After leaving for 30 seconds, I then use a warm flannel to remove all the residue. Everything pretty much comes off in one simple sweep and by using a flannel (which has a bit of texture), it will also remove any pesky dry skin cells that you don’t want clogging your pores.

I was really impressed by how simple it was to remove the (eek) four layers of foundation I’d put on before heading out (I maybe even added the extra layer to really put it to the test – or to combat the heat – who knows?!). Usually I have to fiddle around and engage in the whole process two or three times to really get rid of everything, but this was so soft and easy to use – it really dissolves any make-up you’re wearing. 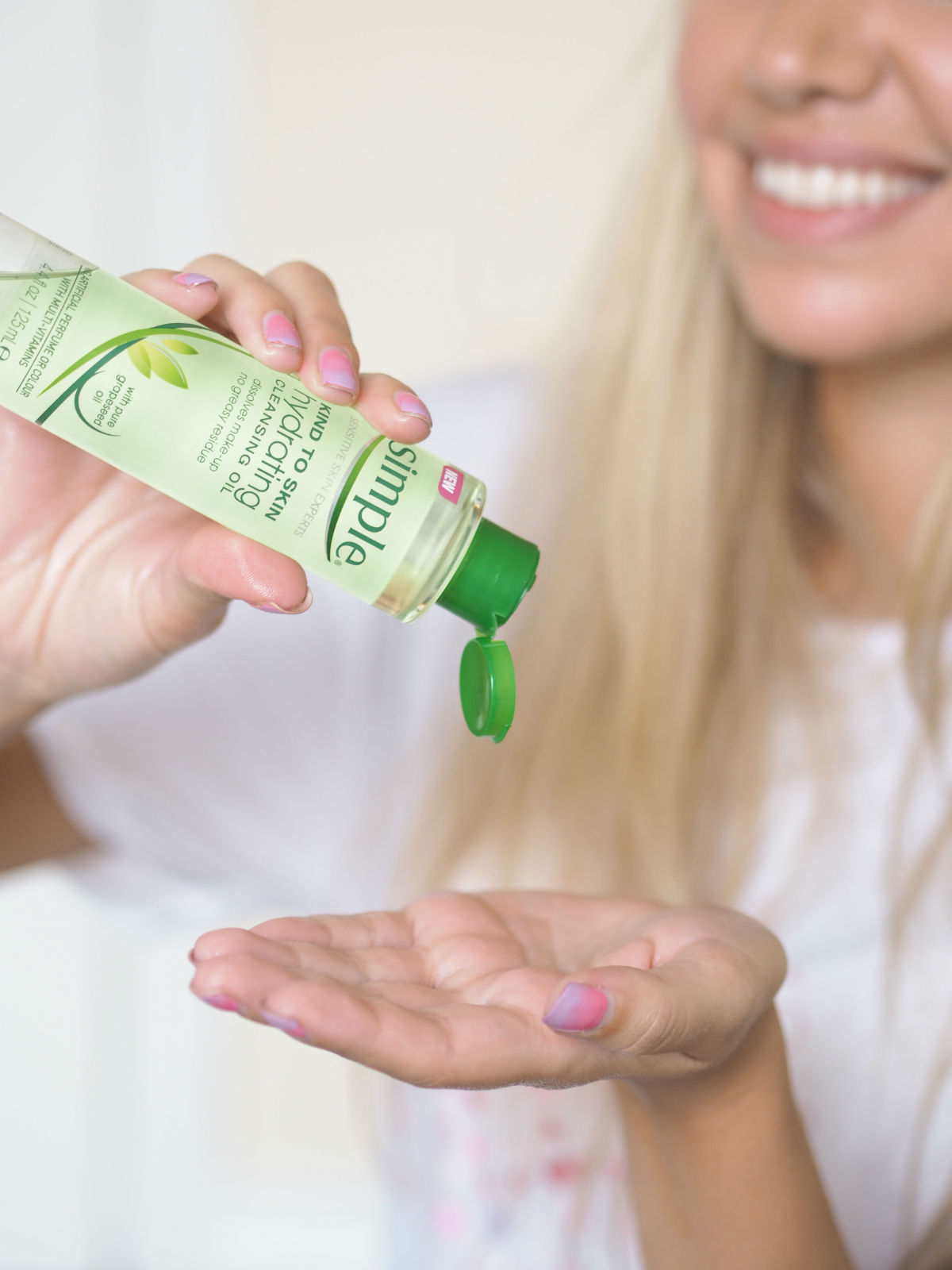 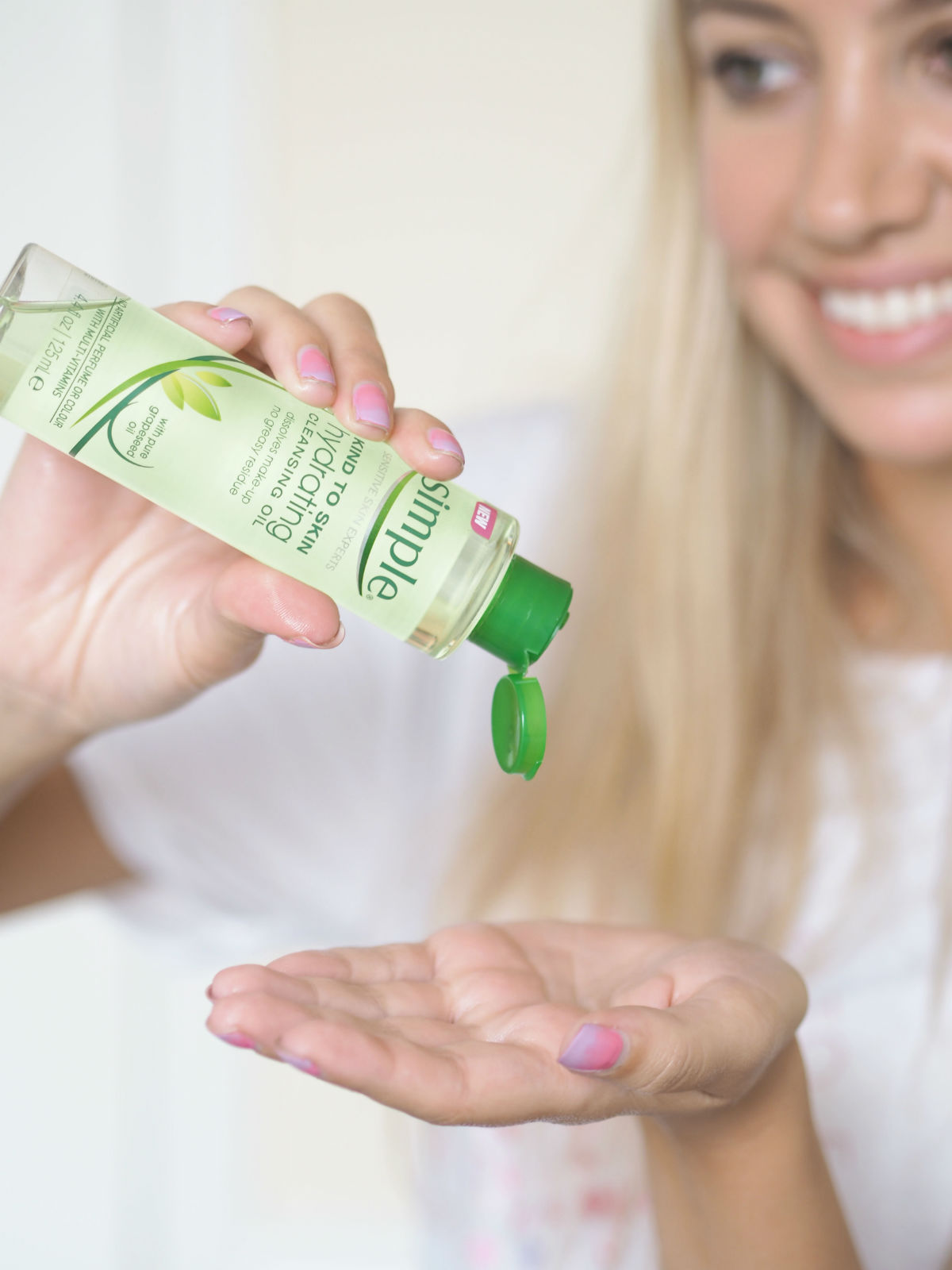 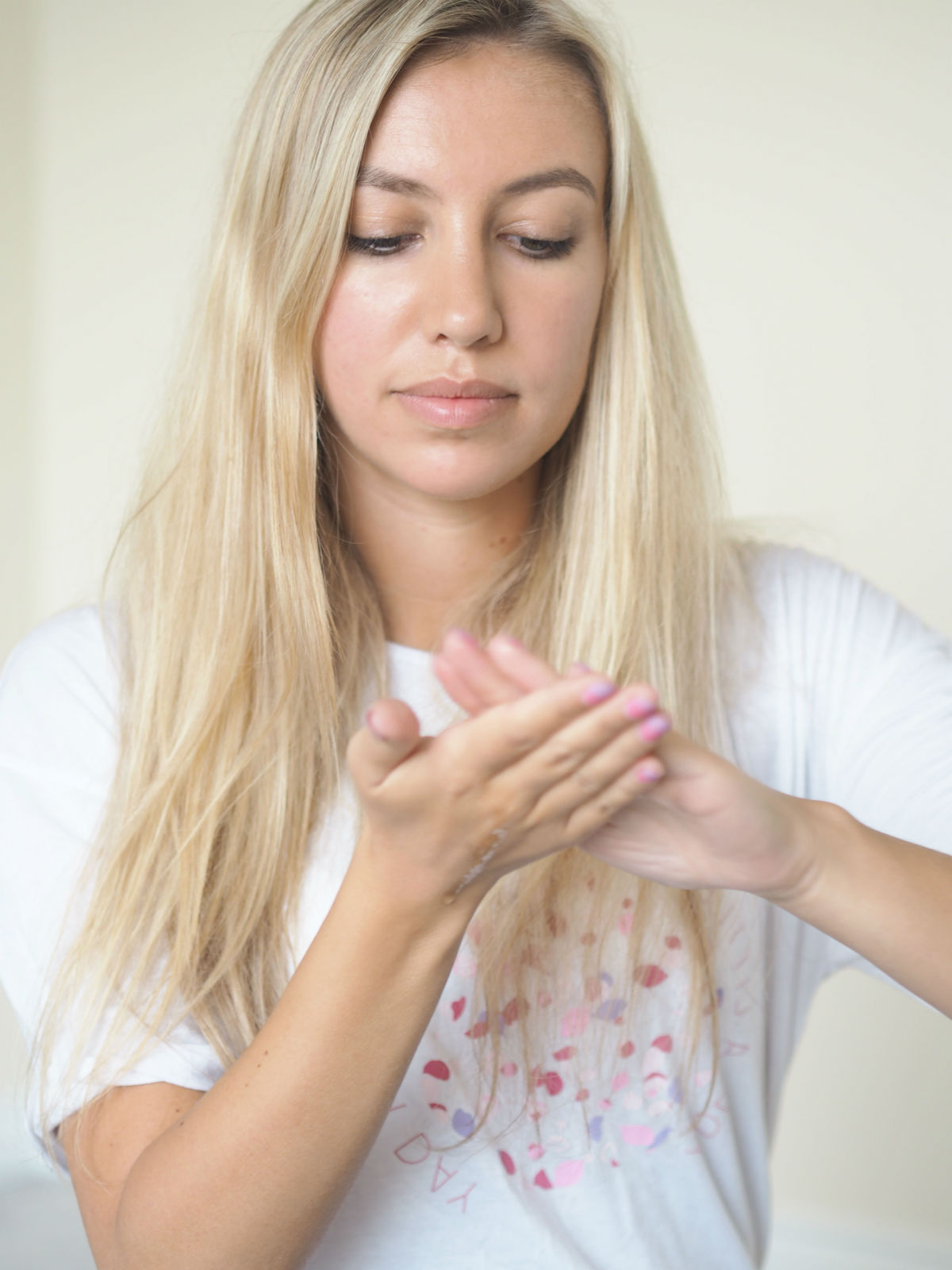 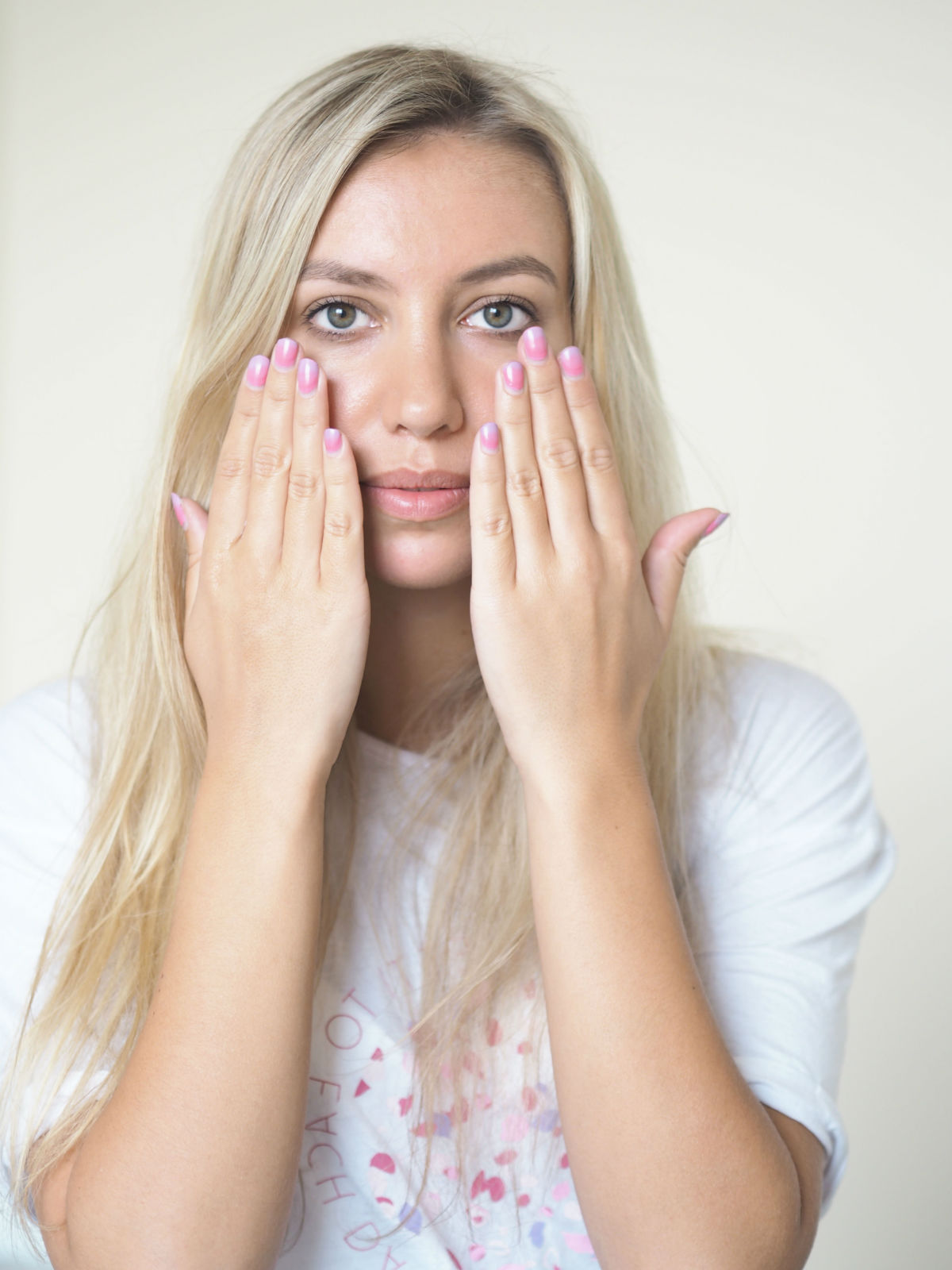 I know lots of people are a bit dubious about using oils, especially those with oilier skin types – however it’s a complete myth that using oil based cleansers will leave the skin greasier than before. They actually remove excess oils better than a cream and it really penetrates your pores and cleans deeply, meaning you won’t be left with any residue.

As I suffer with dry and sensitive skin (what a fab combination eh?), the Hydrating Cleansing Oil leaves it feeling so clean, soft and hydrated. In fact, so much so – I actually forgot to put on my moisturiser on one very tired evening! You don’t get that tight, slightly uncomfortable feeling after you’ve washed your face that you can experience from a soap or gel cleanser.

I say fashionista lightly, because there’s no way I am one. But hey – I do always try something a bit different for Fashion Week, as it’s a great excuse to dress up, experiment with something you’ve been wanting to try for ages and spread your wings a bit!

This season, I attended for one jam-packed day and so needed a rather glamorous look that wouldn’t melt off my face halfway through the day under all those harsh lights! I opted for a base of shimmery foundation and a few strokes of mascara, before heading off to one of the social lounges to have my full face ‘topped up’ by the professionals. I know when I have my make-up done professionally, there’s always a lot more residue on the flannel – so I thought it would be a great way to road test these products both on an everyday basis and for more of a ‘party’ look. 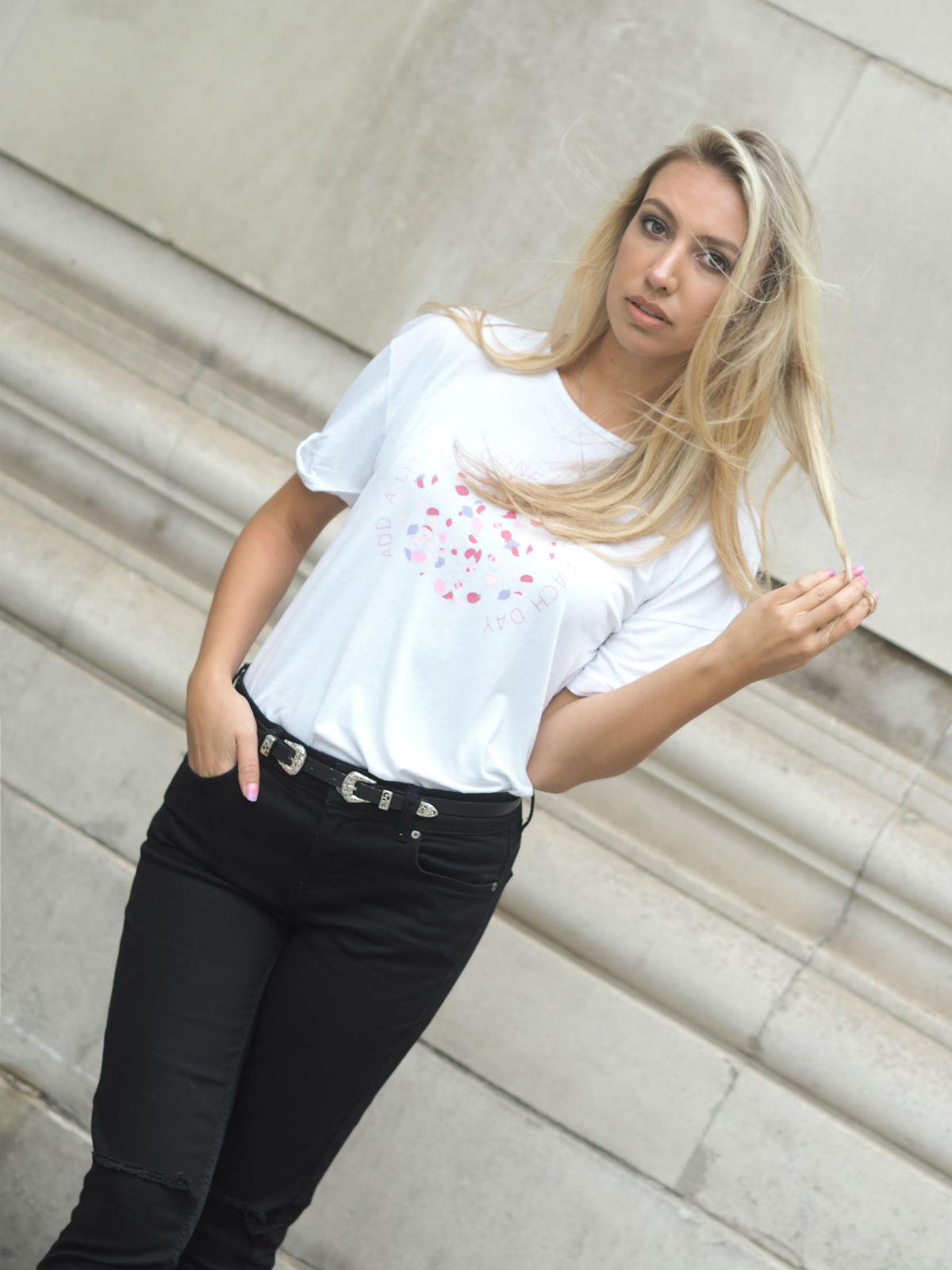 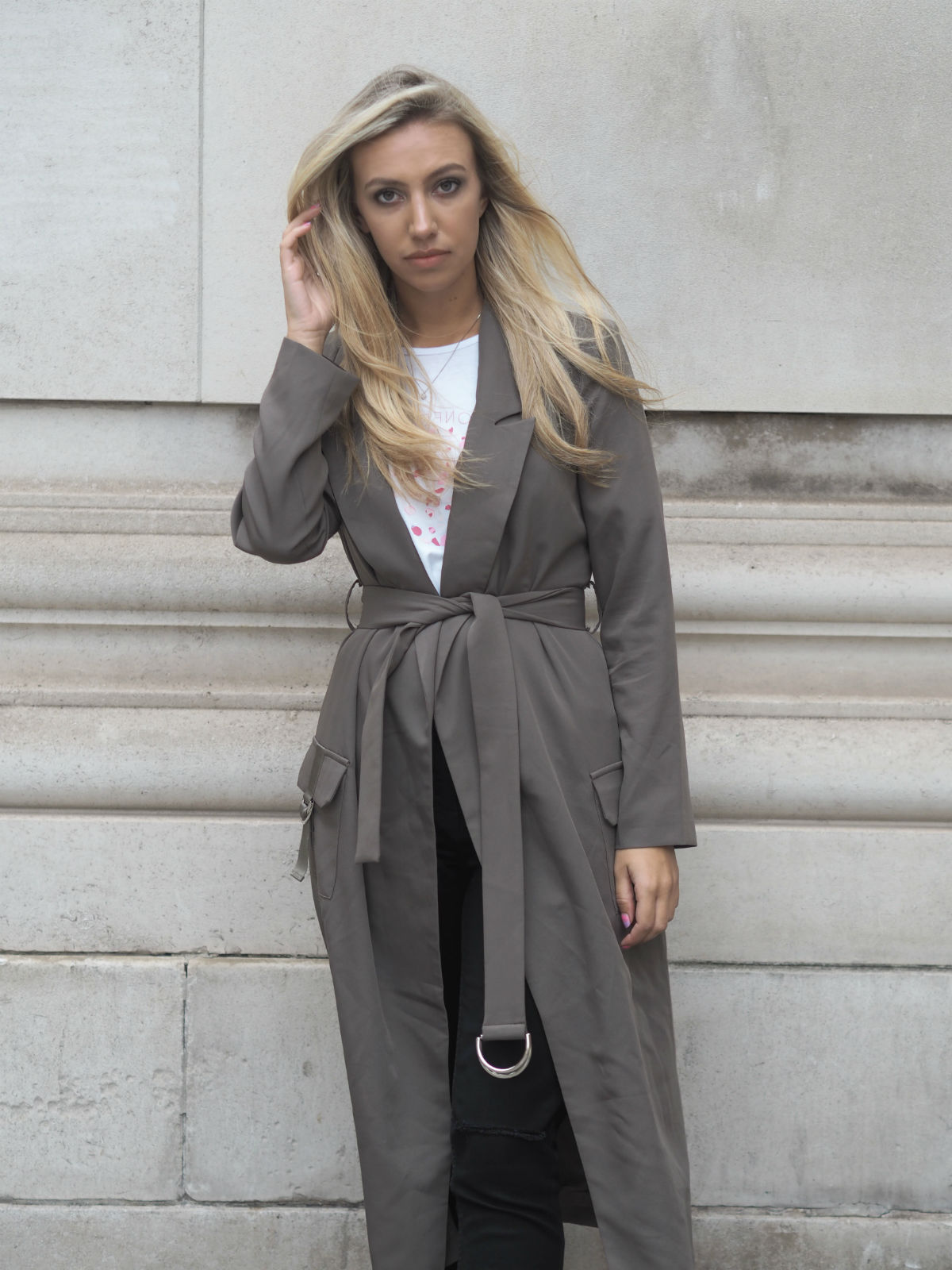 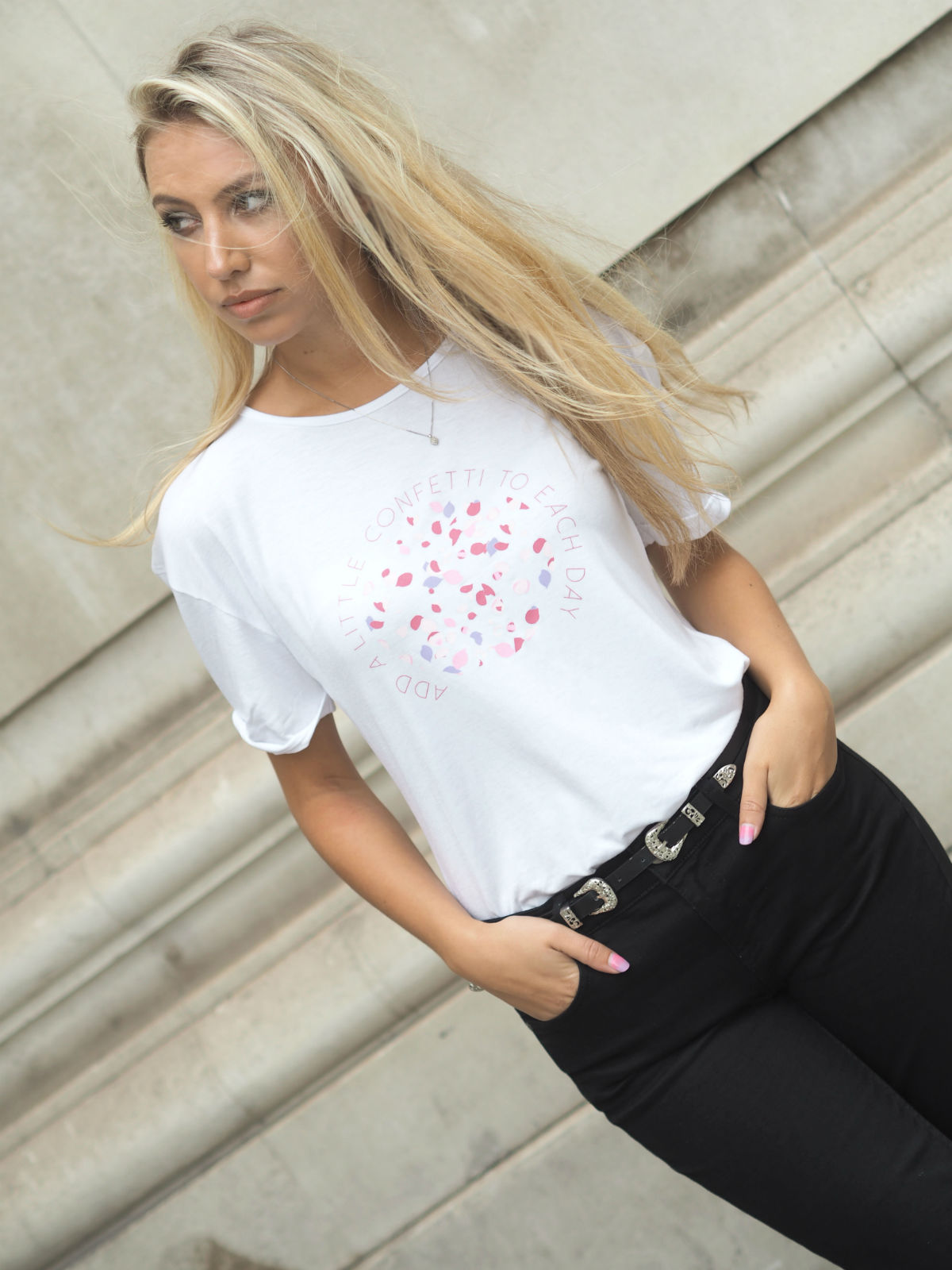 As I was wearing a forest green coat and black jeans, we decided to go all out and create a khaki smokey eye look – with a subtle black flick on the lash line. A shimmery powder was put underneath the brow to create that polished arched look. I thought it might look a little OTT for me, but it actually came out great!

We then finished things off with a spot of contouring and a darker nude lip – to let the eyes do all the talking!

The make-up look held for the entire day, even during a post-LFW Mexican dinner treat and four train cancellations…

As great as it looked though, there’s nothing quite like getting home and taking all your make-up off. I don’t know about you, but I can’t ‘fully’ relax until the last sweep of mascara has been removed from my lashes. There’s something about being make-up free that’s so… well… free. Relaxed. At ease. 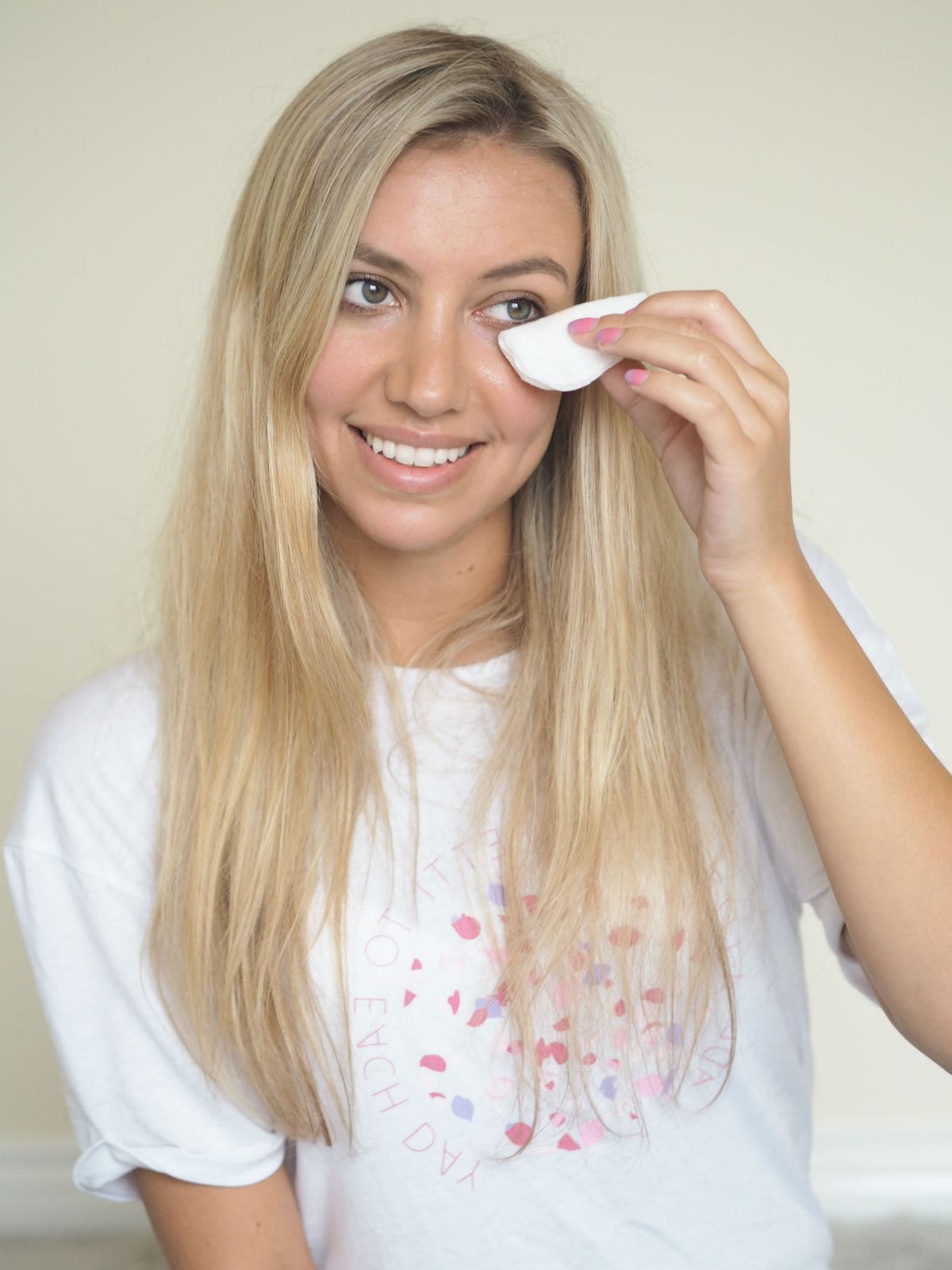 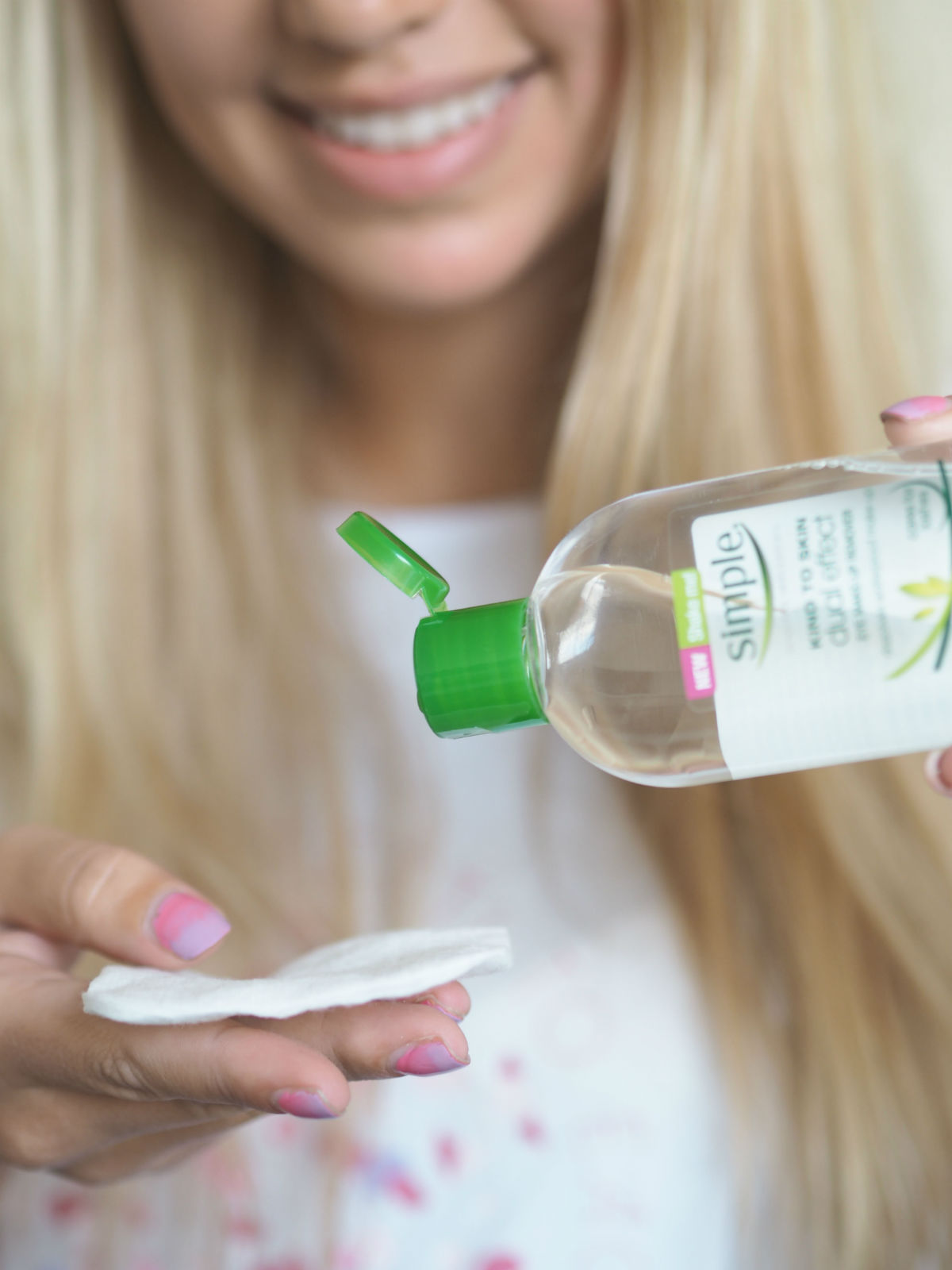 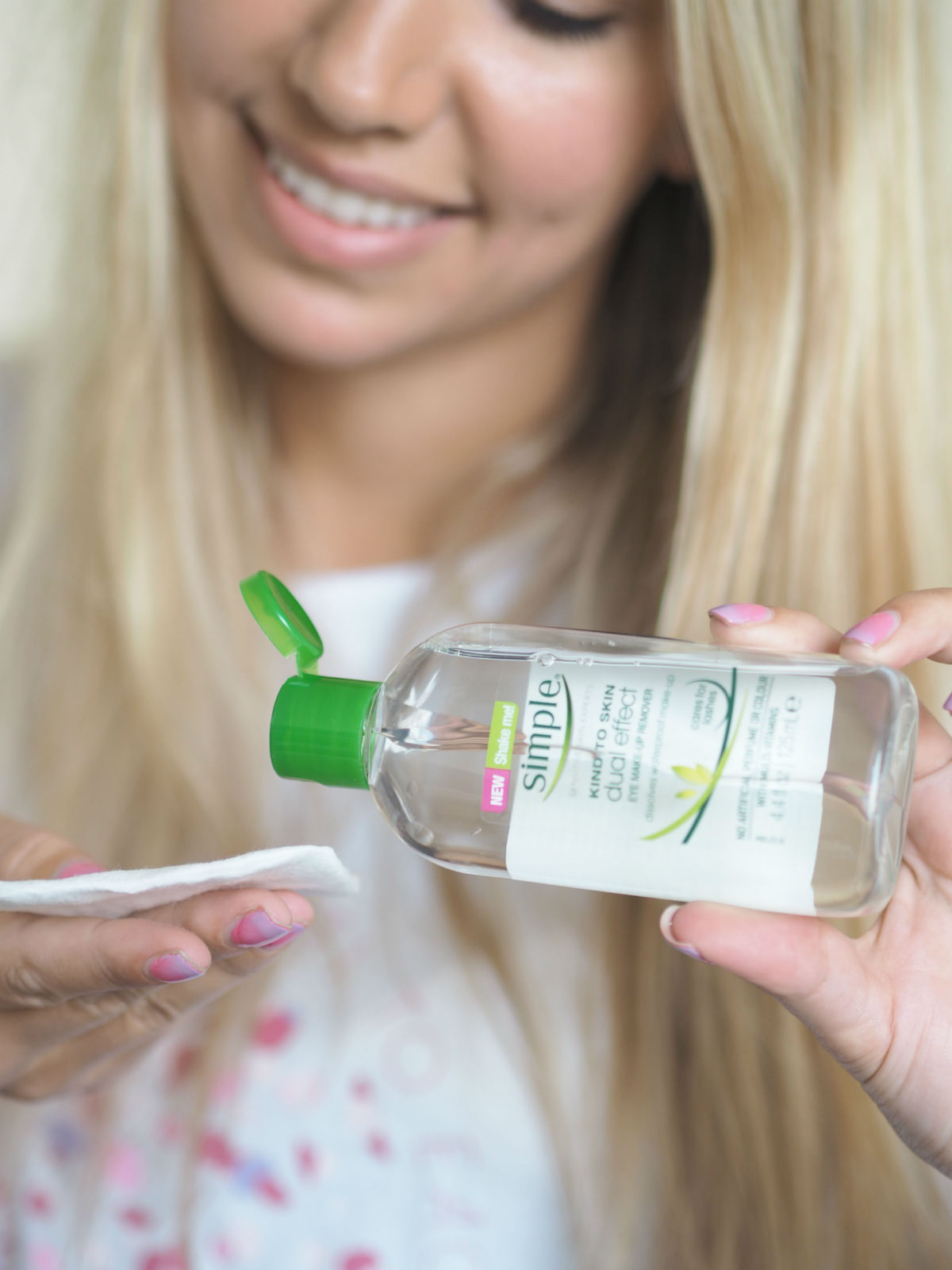 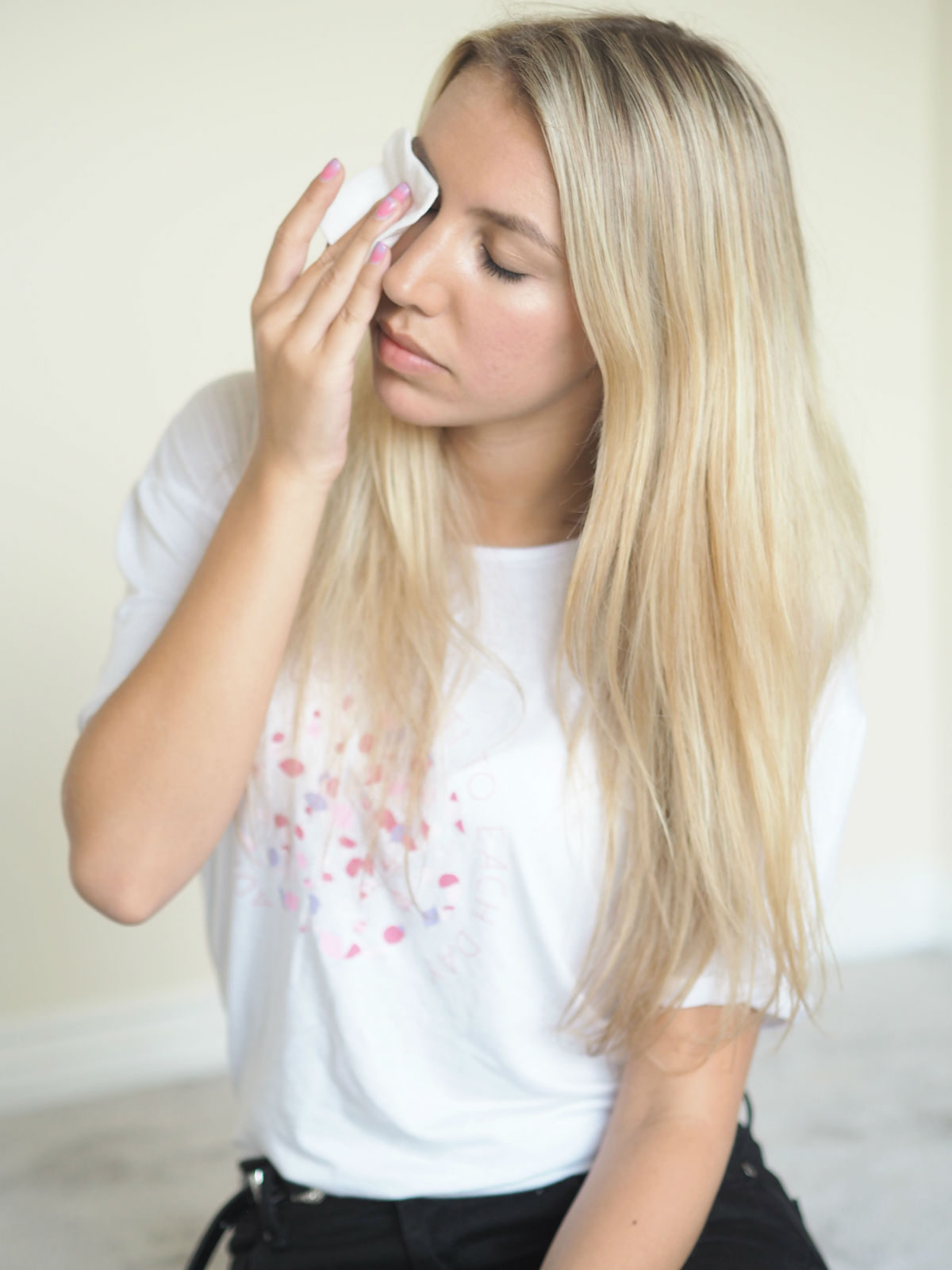 So the first thing I did when I stepped through the door was head to the bathroom to remove the gorgeous, but rather heavy eye make-up. I’d love to say I photographed this specific event for you, but I was working with a blinking lightbulb in a rather dark (but very lovely) en-suite bathroom – so this probably wouldn’t have been the most photogenic of affairs.

Instead, I re-created what I did (minus the tired red eyes) the next afternoon for you – which you can see photographed above).

As well as using my new favourite Hydrating Cleansing Oil, I also put the Dual Effect Eye Make-Up Remover to the test to really wipe away all traces of the very exciting, but tiring day! Since it’s a bi-phase cleanser, it contains both a purified water and and oil-based formula – so the first thing you need to do to activate it’s eye-make-up-melting properties is give it a good old shake.

Then, pop a few drops on a cotton pad and then sweep over the eye area!

Contrary to popular belief, the stinging sensation you get with some eye make-up removers doesn’t necessarily mean it’s getting rid of everything and doing good. It doesn’t need to sting to be effective – and in fact, Simple’s Dual Effect Eye Make-Up Remover is so gentle, it’s like putting water onto your lids. There’s no eye watering residue to deal with – and if you use one pad per eye, you can be rest assured that you won’t morph into a panda either!

There’s also the added benefit that it conditions and cares for your eye lashes too – since we often forget about those when we’re tired and just want to get rid of the heavy weight of make-up! The formula is so effective that you don’t need to vigorously rub to remove what’s there – and this also cares for your lashes (do you ever notice lots are coming out on the cotton pad – if so, you’re probably rubbing a little too hard).

So there we have it, two very new and very fantastic products from the range that I can honestly say – has transformed my skin. The two biggest tips I can offer in terms of seeing pretty instant improvements is to use an oil based cleanser rather than a cream (a cream got into the red, angry pores and left them looking like acne) and to use a warm flannel to get rid of any residue. The texture removes any dead skin cells and you won’t be left with a tight, uncomfortable face.

I’d also invest in a really great moisturiser – again with a slightly oilier base. I have to leave mine to dry a lot longer than I did with a cream as it’s much thicker, but the results are amazing!

I’ve come to terms with the fact that I’m always going to have a bit of redness (you can see it in these pictures, especially the ones where I’ve taken my make-up off) but my skin is so much happier and healthier.

Without sounding like a very cliche (overly smily) television advert, when my skin looks good, I feel good. And that’s what #FeelGoodSkin is all about!

Do you have a #FeelGoodSkin story to share? Have you changed up your skincare routine recently?

This post was written in collaboration with Simple, but as always – all opinions, reviews and photographs are my own. Skincare works differently on different people, but I’ve used the brand for almost 10 years and I have no complaints! 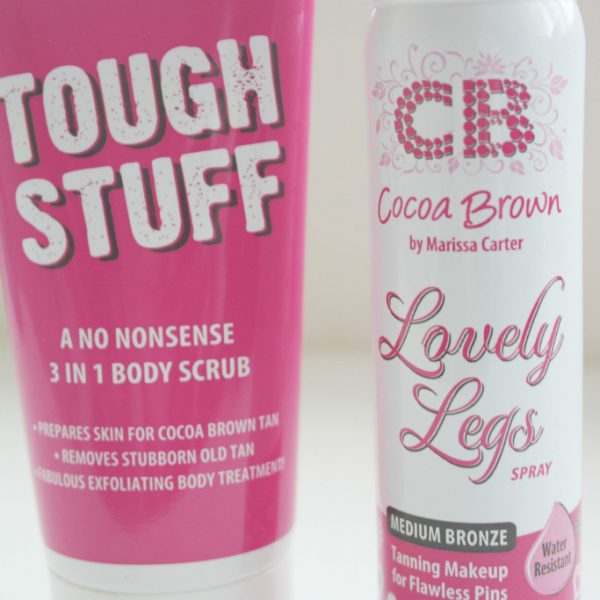 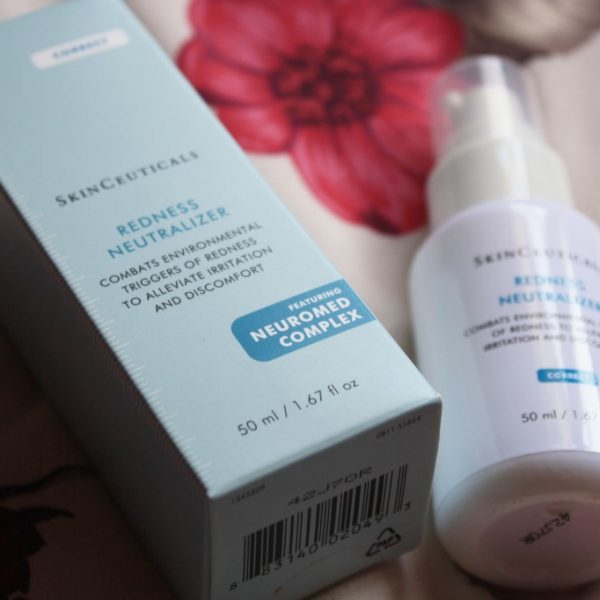 How to: Fresh Faced Make-Up Tutorial