I’m a little late reviewing this month’s Glossy Box due to a little Christmas blogging break, however as they say, better late than never! This month, as you can probably guess, the beauty box was based around the festive season, featuring some cosmetic based ‘stocking filler’ ideas for last minute present hunters. Since I’m reviewing this post-Christmas, I will look at them from a beauty perspective, rather than looking at them as gifts, especially as I’m sure there are lots of you who have vouchers and money to spend! 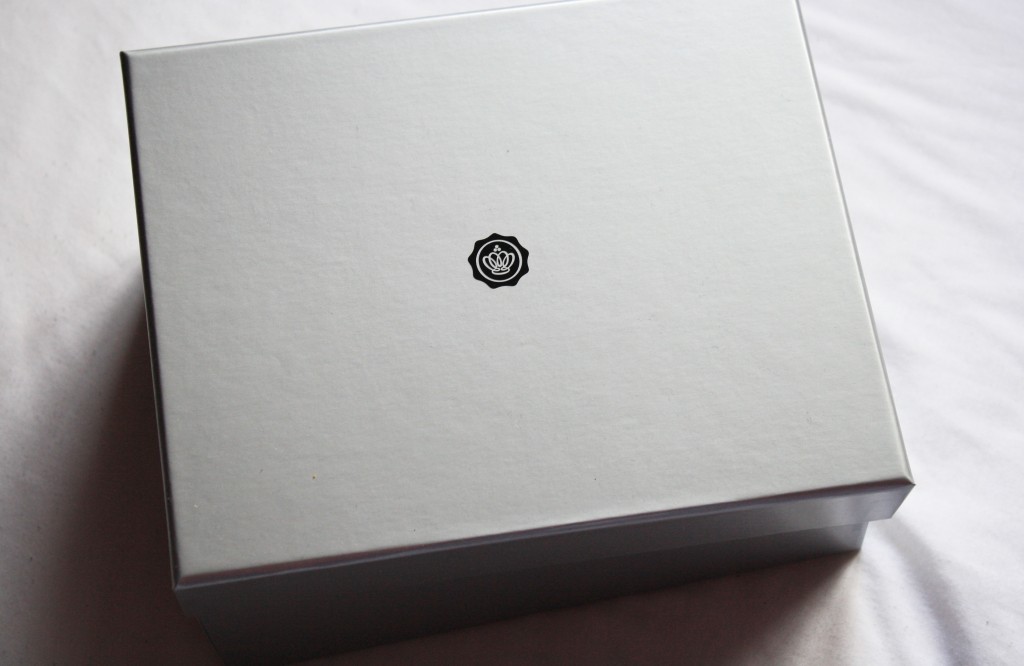 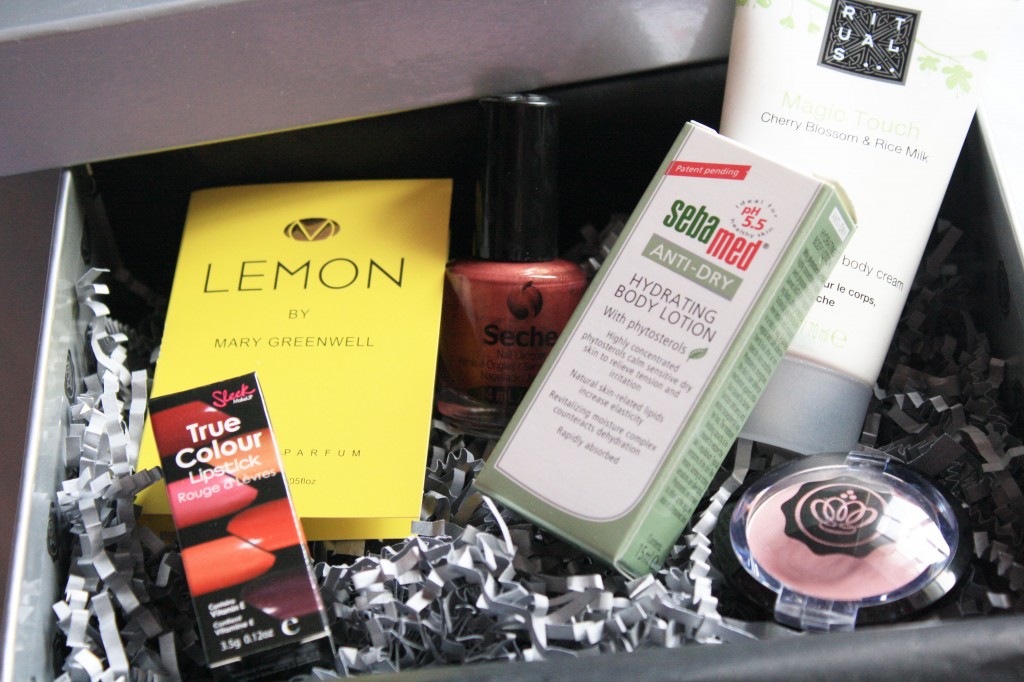 The box itself this month was a dark silver colour, with star emblazoned tissue paper inside. Although it looked great, I was a little surprised Glossy Box didn’t go for a more festive colour scheme with the box, as it doesn’t really look all that ‘Christmas-y’, and with expectations from previous boxes, I was a little disappointed. Of course, it’s not the box that you’re paying for, it’s the stuff inside that counts, but as shallow as ever, packaging and aesthetics are what draws me into beauty and cosmetic products, so I always like to consider it when reviewing! 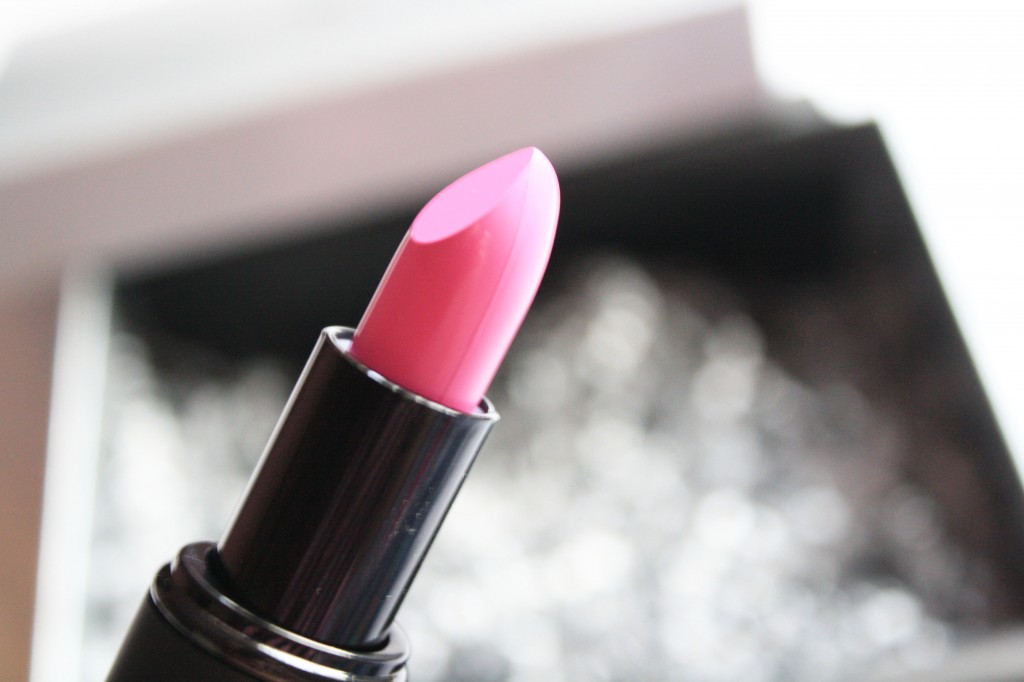 I am a huge fan of Sleek make-up, as they always seem to touch upon colours and shades that no other brand has got right, and with this product – it’s no different. The matte lipstick is a gorgeous pink colour, with orange undertones – meaning that it doesn’t come out too contrasty (yep, technical word), or too sickeningly pink. The colour is very vivid however, and lasts around a hour (when eating and drinking) without having to re-apply. The formula isn’t particularly hydrating, so I would recommend to use a lipgloss or lipbalm before applying, to give the lipstick a smooth base to hang onto. I’ve always found Sleek very affordable, and at just £4.99, this is definitely a product I will be re-investing in. 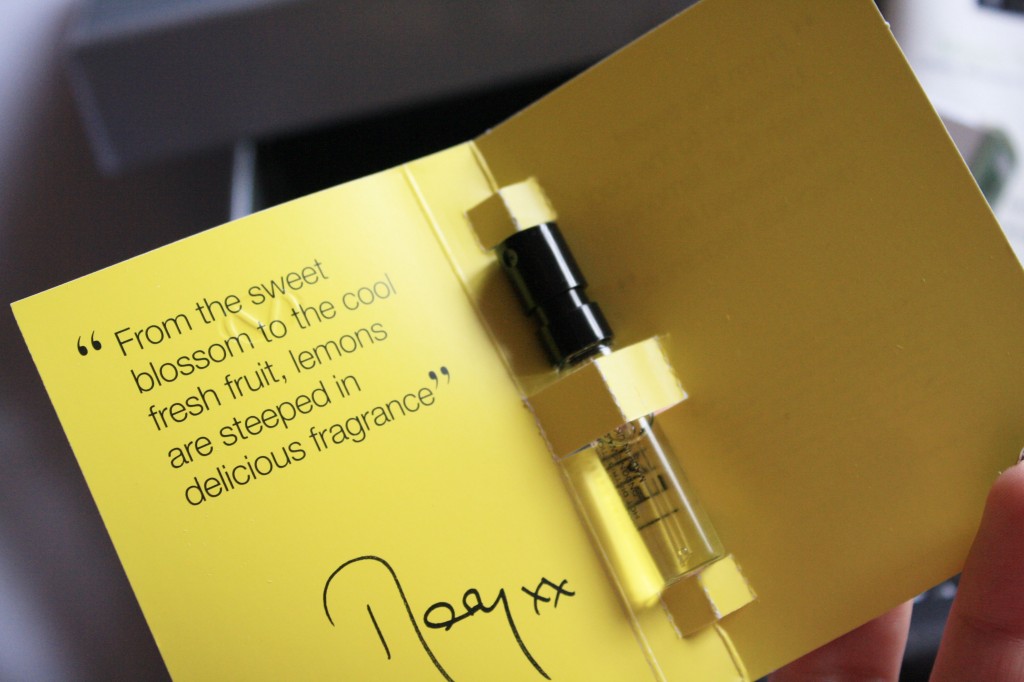 I know that Glossy Box work very closely with Mary Greenwell, as there have been several of her fragrance samples featured in previous months, however I haven’t actually liked any one of them. When I saw that another fragrance had been included in this month’s box, my heart did sink a little, as I love trying out new fragrances, but for me Mary Greenwell has a very old lady (ish) feel to it and my initial thoughts were that I wasn’t going to like it. After a quick spritz, I was a little surprised to find it was a little more modern and fresh than previous fragrances, with sharp citrus lemon notes running through it. The scent itself lasts on skin for several hours, however it is quite overpowering and does demand attention – so it’s more of an evening wear fragrance. I personally wouldn’t invest £60 in a full size bottle, as it’s just not the kind of fragrance I normally go for, and it’s not unusual and endearing enough to change my taste. So all in all, it’s worth sampling, but it’s a little too much for me. 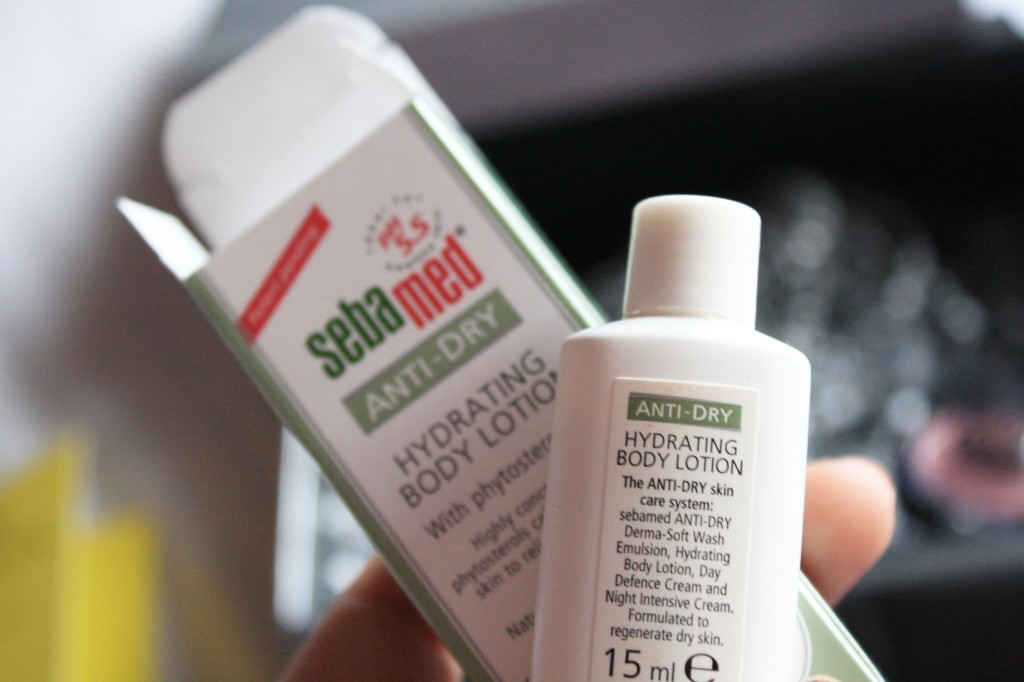 I’m really pleased Glossy Box has featured Seba Med this month, as it’s a brand I personally love – and I feel deserves far more recognition than it already gets. I have very sensitive skin, so often have to avoid some of the more heavily fragranced, perfumed body lotions that are included each month, however Seba Med is specifically designed for sensitive skin. All products in the range, including the lotion are PH netural, only containing natural ingredients, which means they won’t irritate, upset or react with skin in any way. I have been using my sample for over a week now (and have used it up already!) and I can feel a real difference in the texture of my skin, as it’s softer, smoother and much less congested. Even if you don’t choose lotions based primarily on the fact they cater for sensitive skin, this lotion is worth investing in for it’s light, airy feel  (£6.99 for a full bottle), as it doesn’t sit heavily on skin at all, in fact you hardly know it’s there at all. 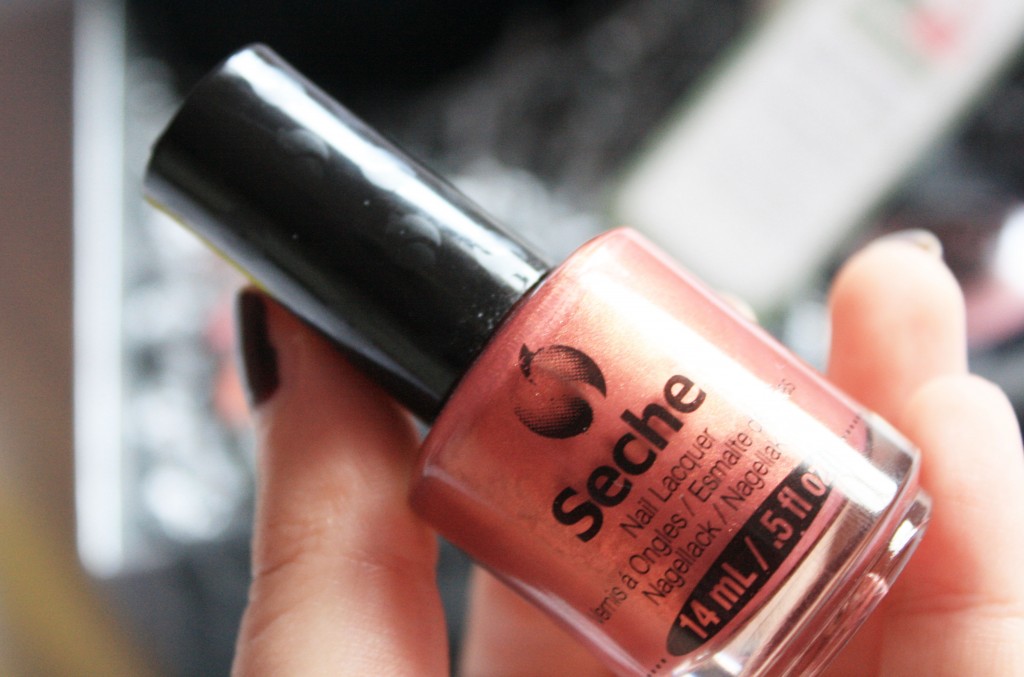 I feel so fussy saying that yet again, I really don’t like the colour of this polish (I’m really sorry, as I know I’ve complained about the colour of the varnishes in the last few Glossy Boxes), however the formula itself is great. It’s fairly thick, without being gloopy and doesn’t chip or peel away at the sides. The burnt, mouldy orange shade doesn’t really appeal to me, as I’m more into bold, bright or sparkly varnishes, however I know a lot of people like metallic-y style shades and so this definitely fits the bill! 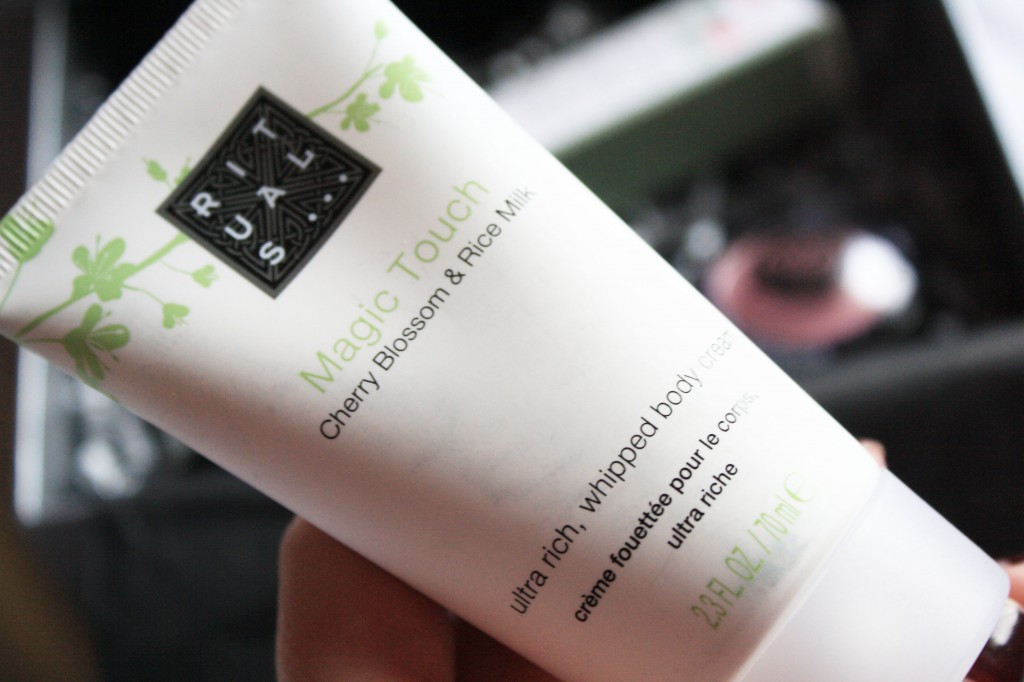 ‘Cherry Blossom and Rice Milk’ sounded rather exciting when I first read about it, however upon actually taking a sniff, I realized it smelt like pretty much every other generic body lotion out there. Don’t get me wrong, it smells very fresh and a little citrus-y, but there’s nothing special about the scent itself. The formula is really silky and although I wouldn’t describe it as ‘ultra rich’, as that makes me think it’s going to be overly greasy, it certainly hydrates, refreshes and softens skin. I love the packaging of this product, as it’s really simple yet also quite chic, however I don’t really think it stands out at all in a long line of other body creams. 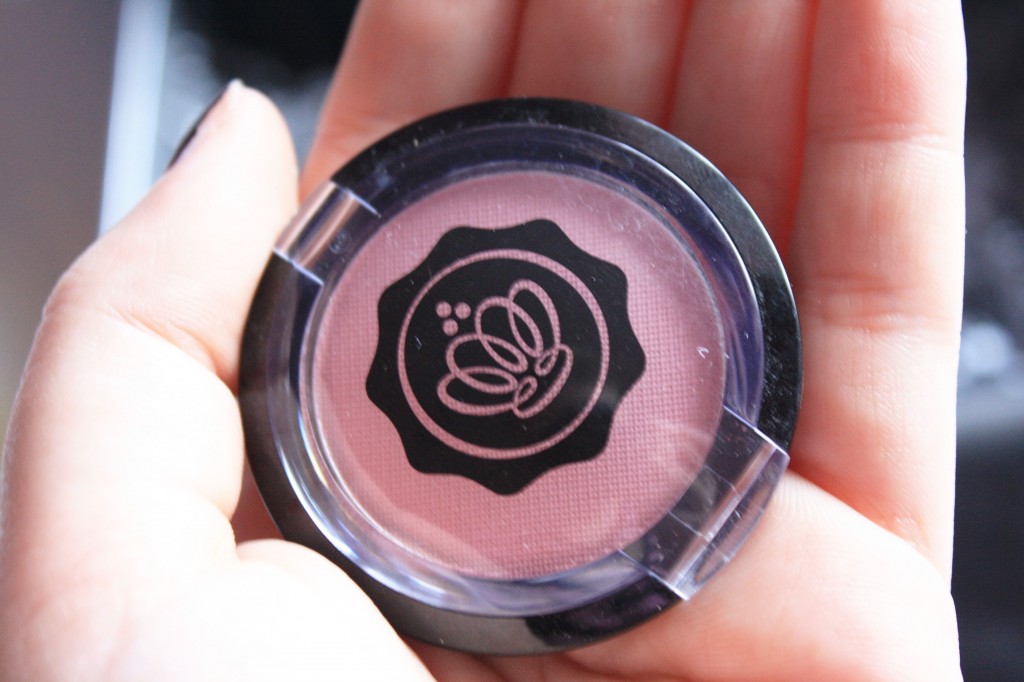 I actually really love Glossy Box’s own personal make-up additions each month, in particular this gorgeously pigmented blusher, which surprised me by being really wearable despite my initial thoughts that it might just be a little too pink. It’s really silky upon application and doesn’t gather up after a few hours of wear like a lot of other blushers do. It’s a very natural colour, which I find quite hard to come by these days (there were several years I went out unknowingly looking like a clown having over-done a very unnatural blusher colour). 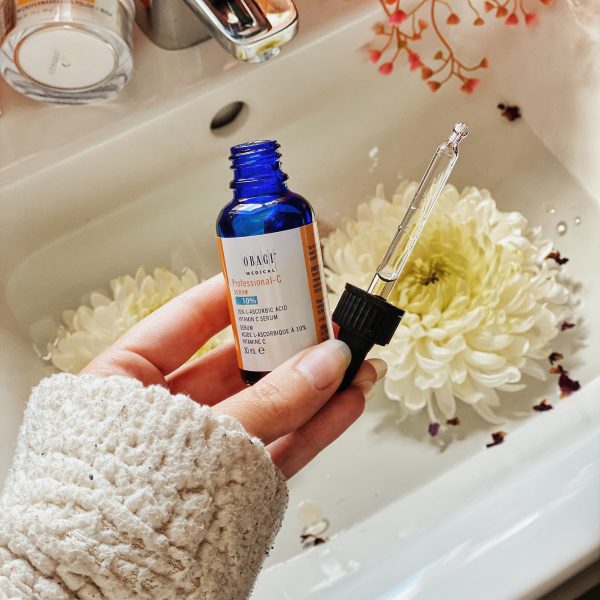 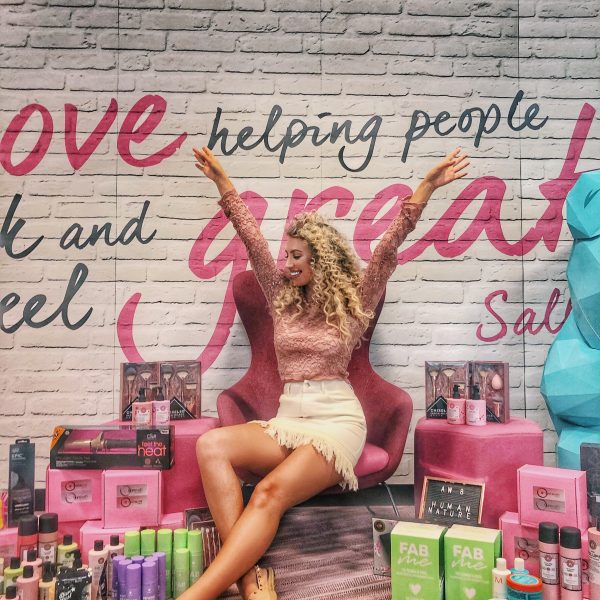