If you think you’ve given Mexican food a go, either during a visit to Taco Bell (which I love by the way), or in Chiquito, then I can assure you, in comparison to my most recent meal out, you’ve tried nothing yet. Nothing of the sort. Nestled on Hampstead Road and close to Warren Street tube station lies Mestizo, an independent family run Mexican restaurant, which attracts ex-pat Mexicans (which is telling of how authentic the food really is) and London foodies alike. With down to earth decor, which feels luxurious but not pretentious and a tequila cocktail menu to rival, well any cocktail menu, it’s certainly a very different, and memorable night out.

Upon arrival, at 7.30PM, fairly early in terms of regular London diners, we were greeted by the friendly staff and shown to our table, which sat underneath a beautiful hand-painted Mexican mural. With tortillas and dip already on the table, and a cocktail menu placed in my hand almost immediately, I felt right at home and began perusing the extensive selection. 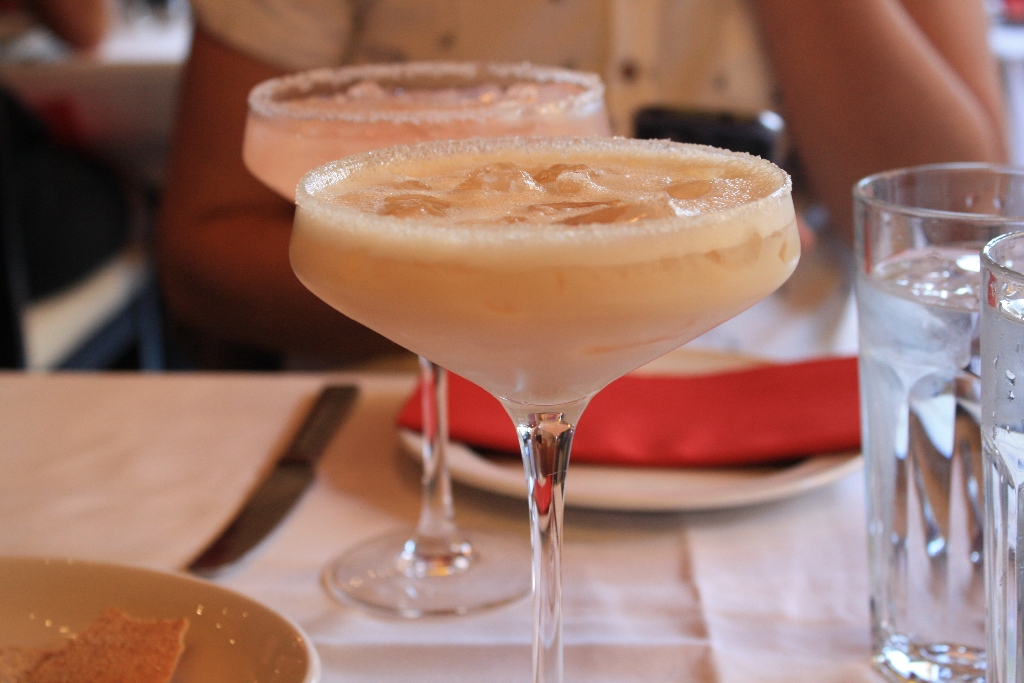 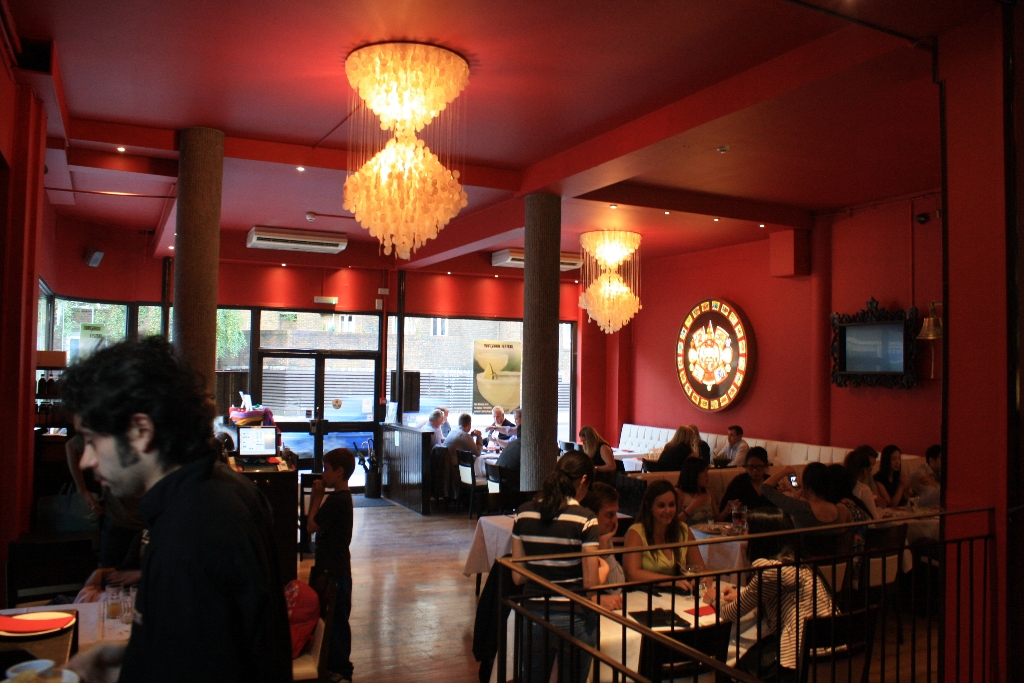 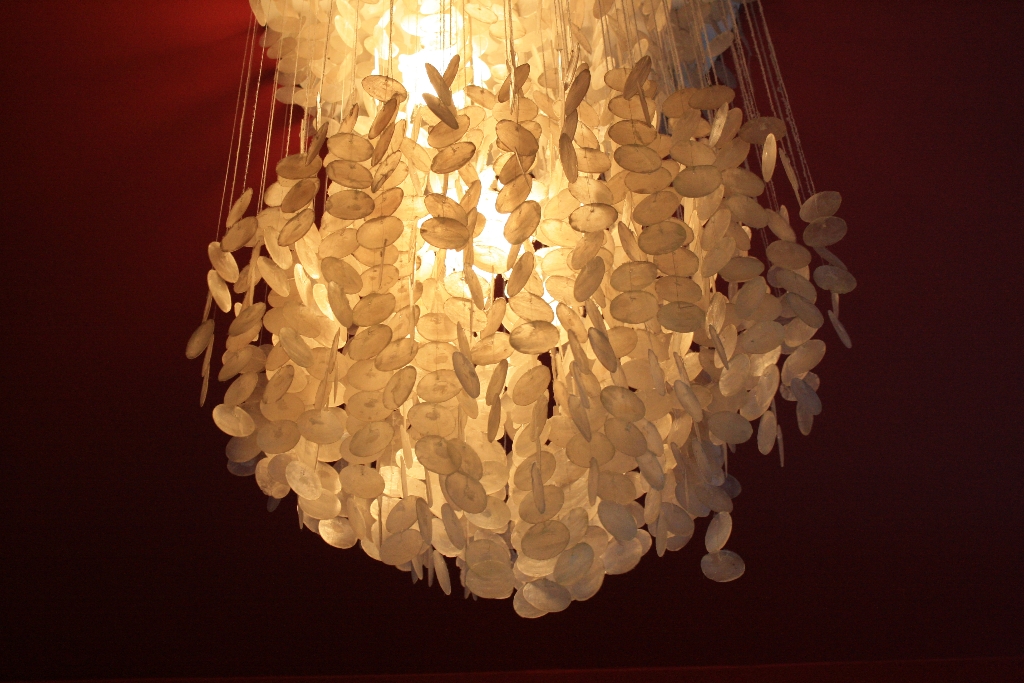 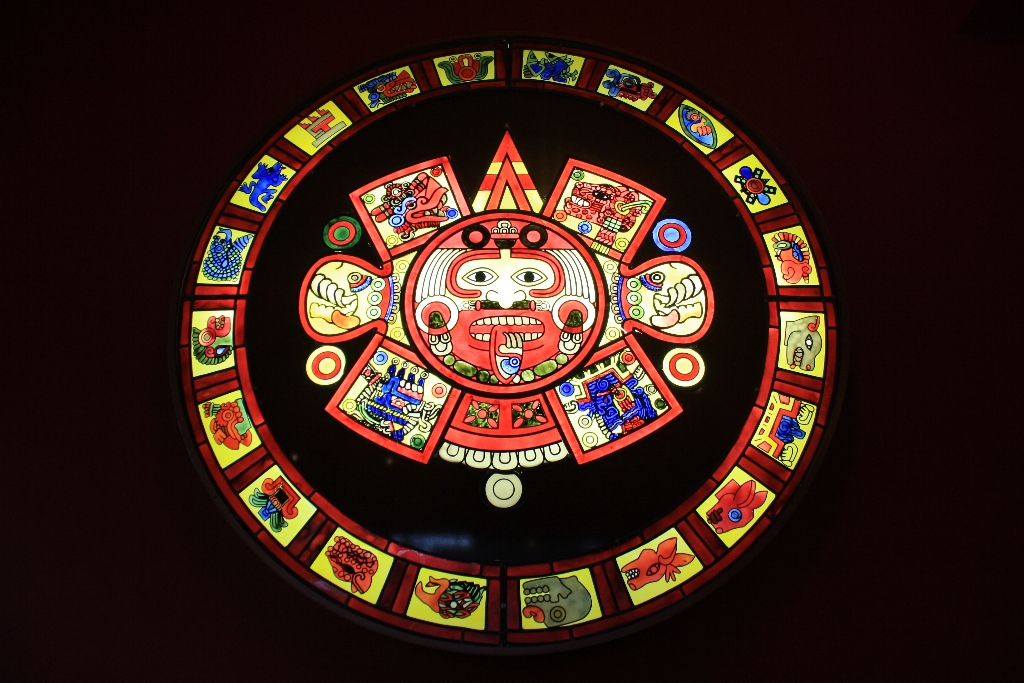 Eventually, although it was a rather difficult choice, I opted for the Vanilla Margarita, whilst Max chose the Watermelon Fresh Fruit Margarita. Served with a warning (they are rather strong) and a glass of water (presumably for the jalapeno based dishes later on too), I have to say, they were absolutely delicious. Although I’m not usually a fan of strong liqueurs and spirits, they were made beautifully and didn’t taste too sickly, or too sweet, but simply – delicious. At £8.50 each, they’re not the cheapest option, but in comparison to other London based bars and restaurants, which are more in the £12.50 range, Mestizo cocktails actually offer good value. Especially since they are made with the best quality tequila!

After a large sip (and beware on an empty stomach, these are pretty lethal), we ordered several starters to get a real feel for the menu. As I stated previously, if you think you’ve seen Mexican – you really haven’t until you’ve been to Mestizo (or Mexico, I guess). The usual burritos and quesadillas are on the menu (although jazzed up with sauces, spices and toppings) however the main dishes include the Mole Poblano, chicken breast in a sauce with ‘secret ingredients’ (which include chocolate, yes really) served with rice and beans, or the Ensalada De Nopales, a tender catcus leaf with tomato, jalepeno, cheese and onions. And whether you are a vegan, a vegetarian, a celiac or lactose intolerant, there is a separate menu (not just a few dishes, an entire menu) to suit your requirements.

I will admit, with so many unfamiliar dishes to choose from, it was initially a little difficult to know quite where to start, but luckily, our waiter had an in-depth knowledge of the menu and recommended a few dishes to try, suitable for vegetarians and for my meat-eating boyfriend. When eating out at restaurants, one of our favourite things to do is ask the waiter for his/her opinion, as usually, they will have tried and tested each dish when starting at the job (I say, usually) and can provide a little insight into what they prefer. However, at many places – the waiters are clueless with regards to what a dish tastes like, or even what it contains, because the restaurant in question has never actually given their staff the opportunity to taste any of the dishes themselves. I always find it’s easier to sell, if you have first-hand knowledge. And in Mestizo, all of the waiters (especially ours) have find hand knowledge, and can recommend their favourites. It just makes the experience that little bit more personal! 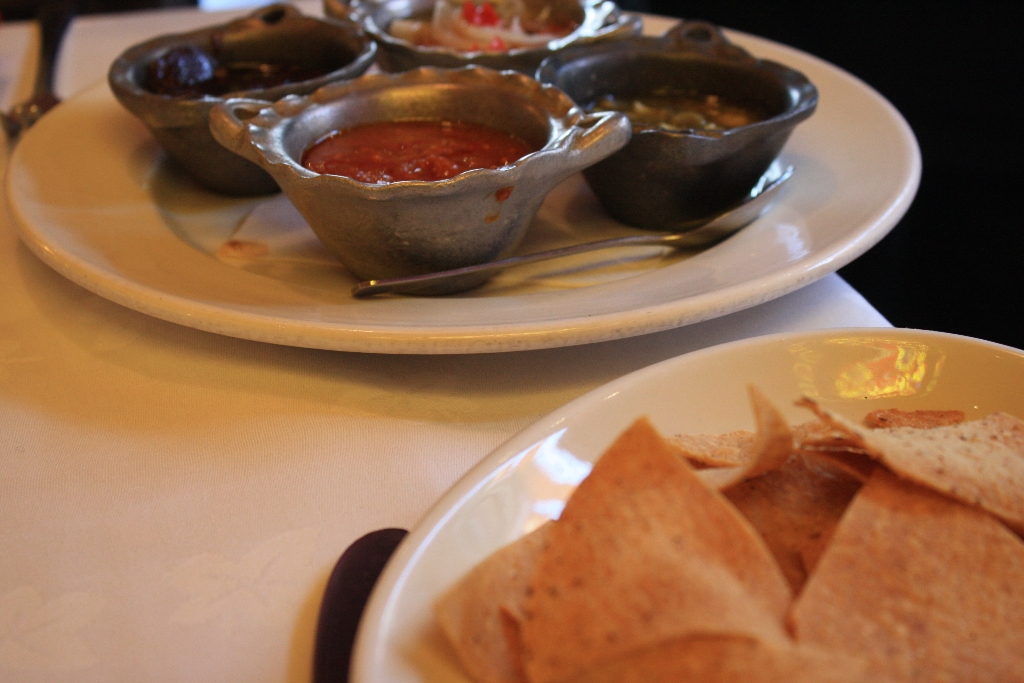 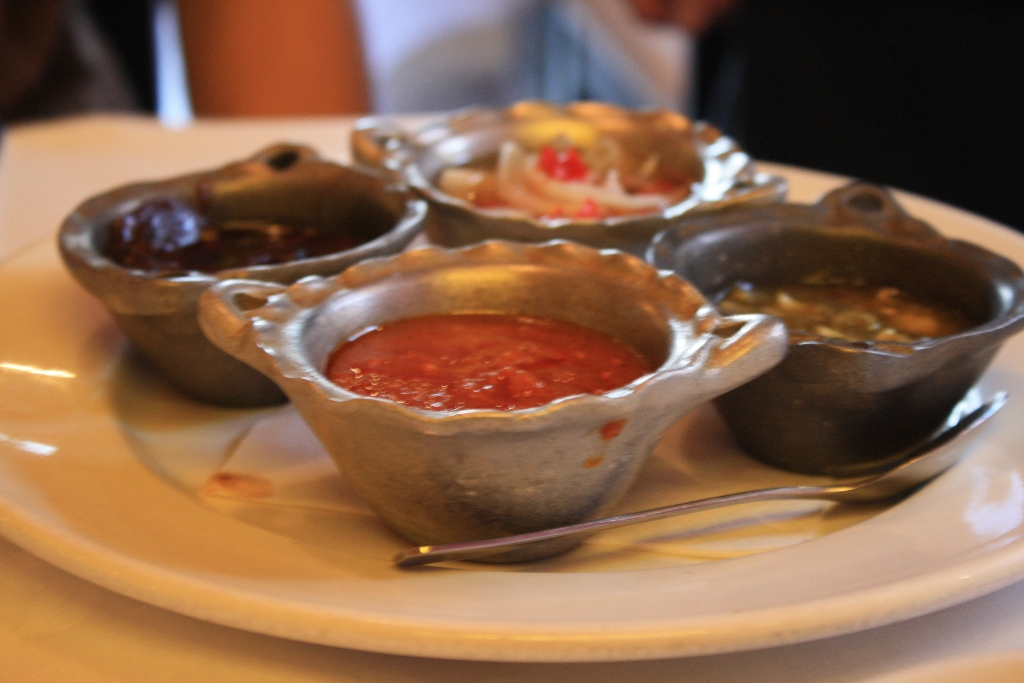 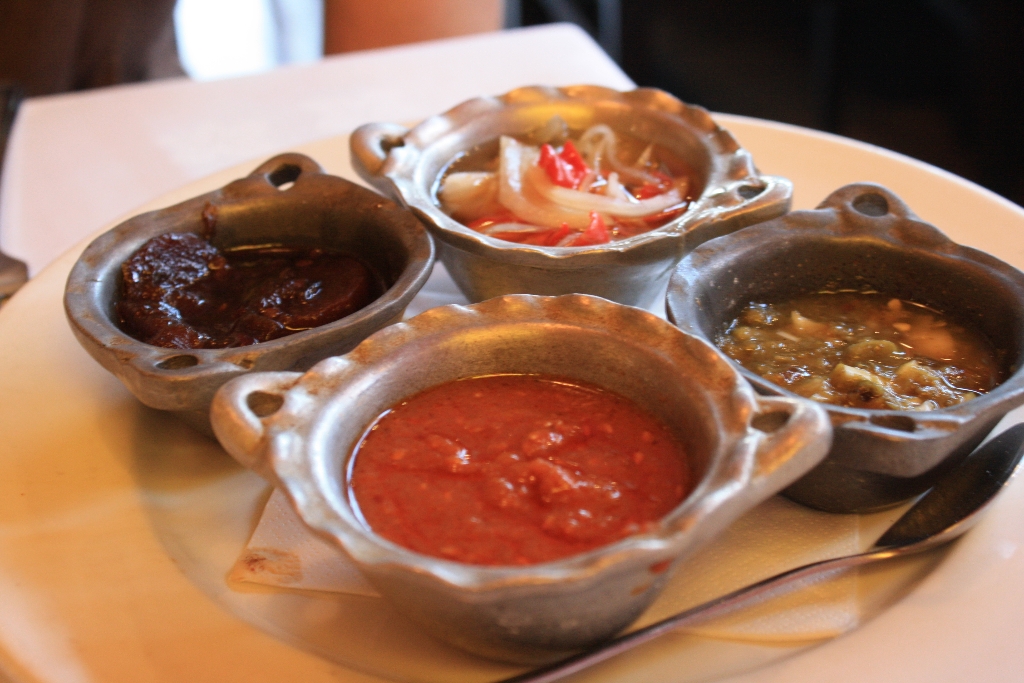 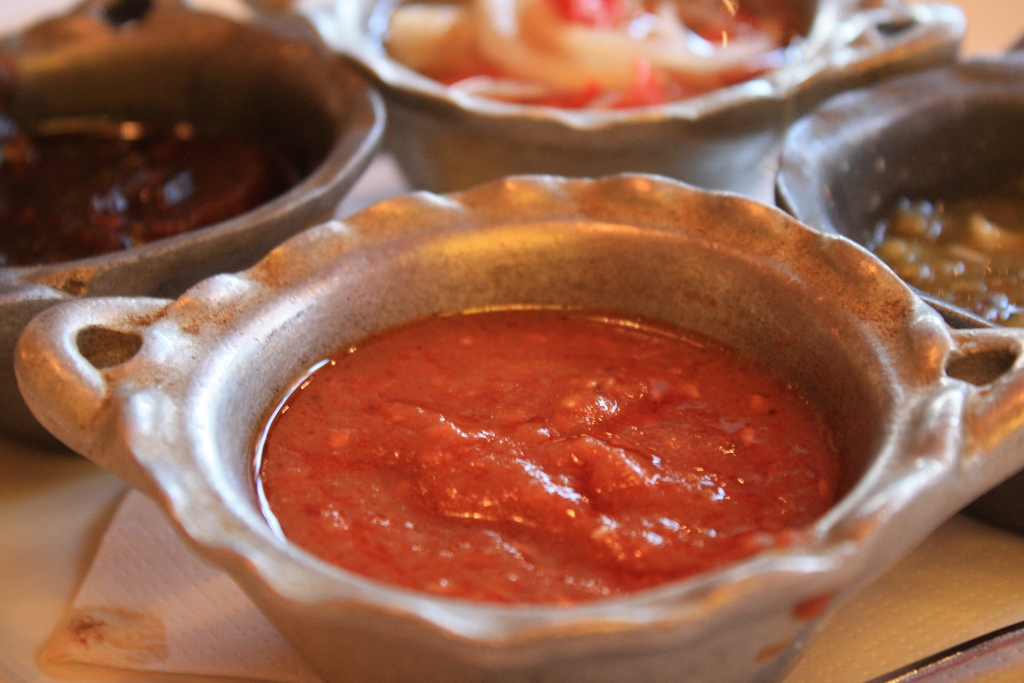 To start with, we tried and tasted four different dishes – 2 meat free and 2 meat based. We later realized (whilst waddling home) that perhaps 4 starters may have been a little overzealous, especially as it was our first time at a real Mexican restaurant, but nevertheless we enjoyed them. I went for the Quesadilla Marqueza, a dish of four corn tortillas filled with rajas con crema cheesa (basically, oozing melted cheese) served with sour cream and slightly spicy salsa. Although a little plain if this is your main starter, it’s a fantastic dish for sharing and dipping – and perfect if you want to ease yourself into the cuisine slowly. 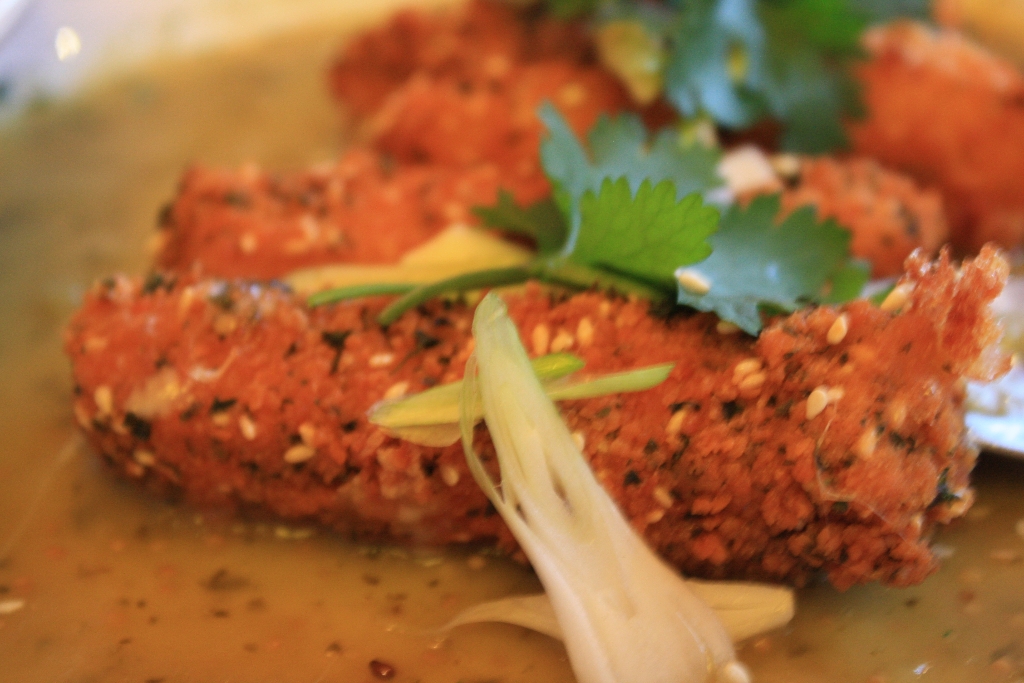 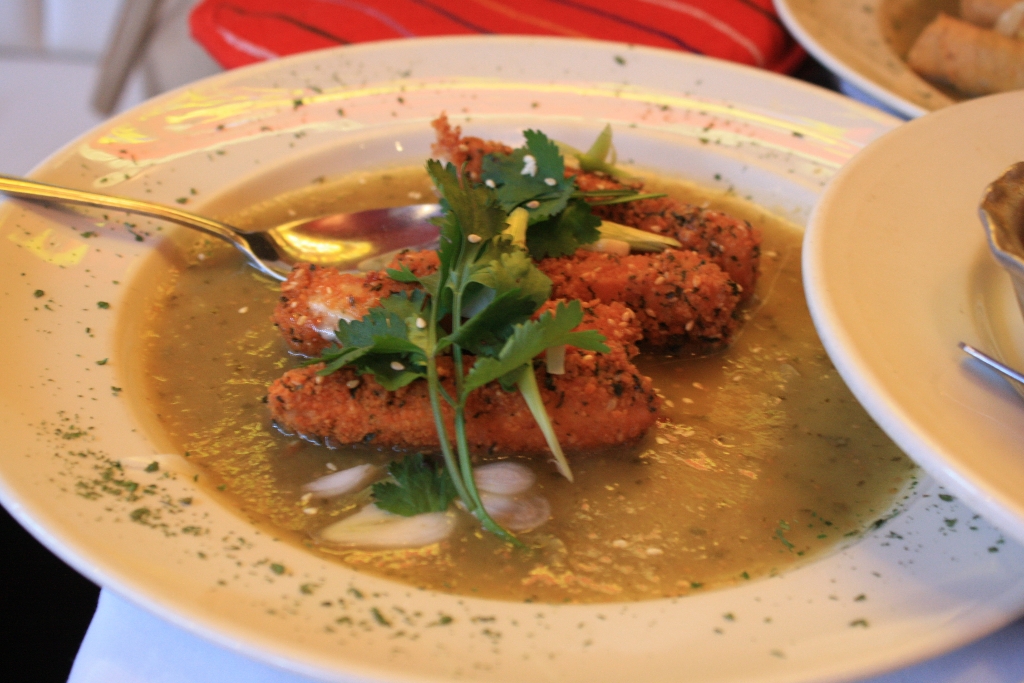 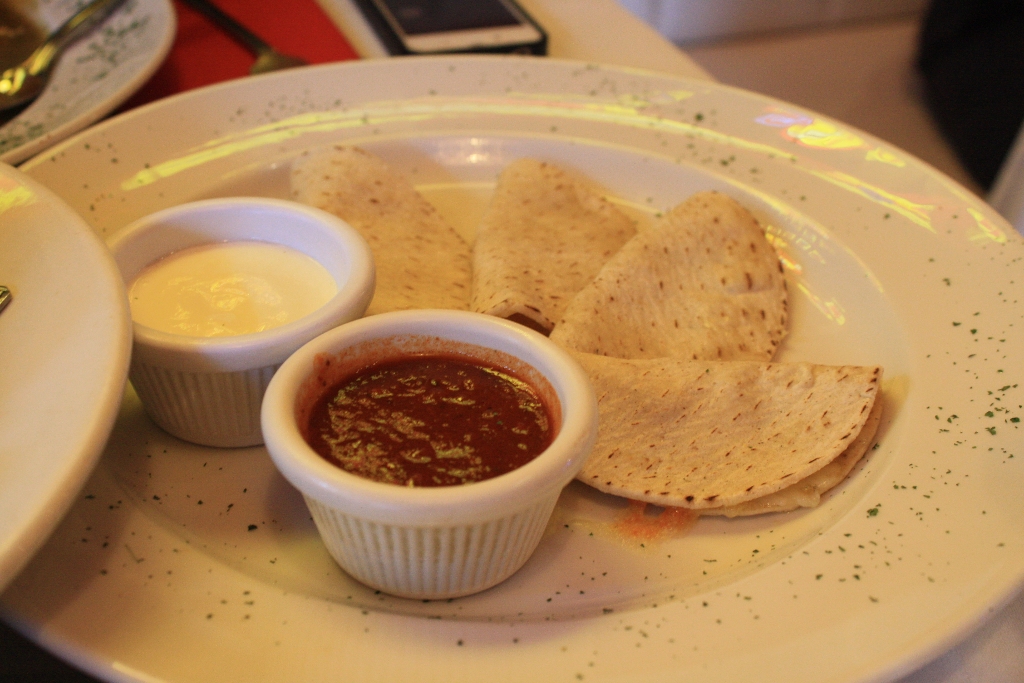 Firmly on the cheese wagon, I also ordered the Queso Frito, four breaded cheese sticks (oozing and melted in the middle) in a pool of green salsa, topped with sesame seeds. I will admit, they looked very heavy initially, but tasted much lighter than they appeared, especially as the sauce gave it an extra tang. It was a little spicy, but the sesame seed coating and the flour tortillas they are served with (to wrap them in) cooled it down and made the whole dish very tame (suitable for those who only like a tiny dash of spice, like me). 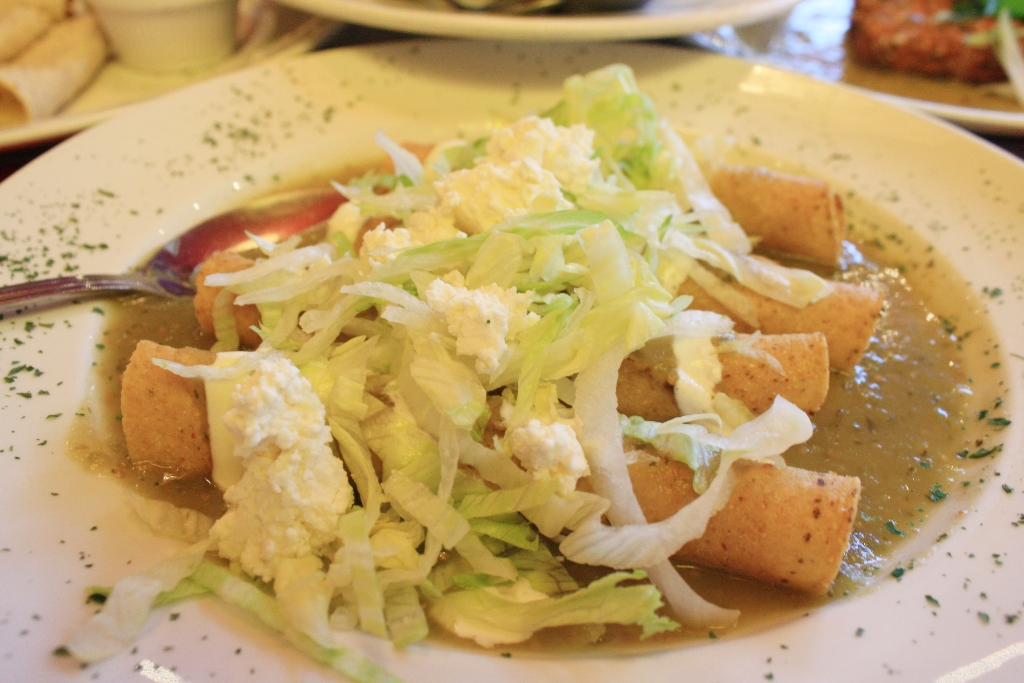 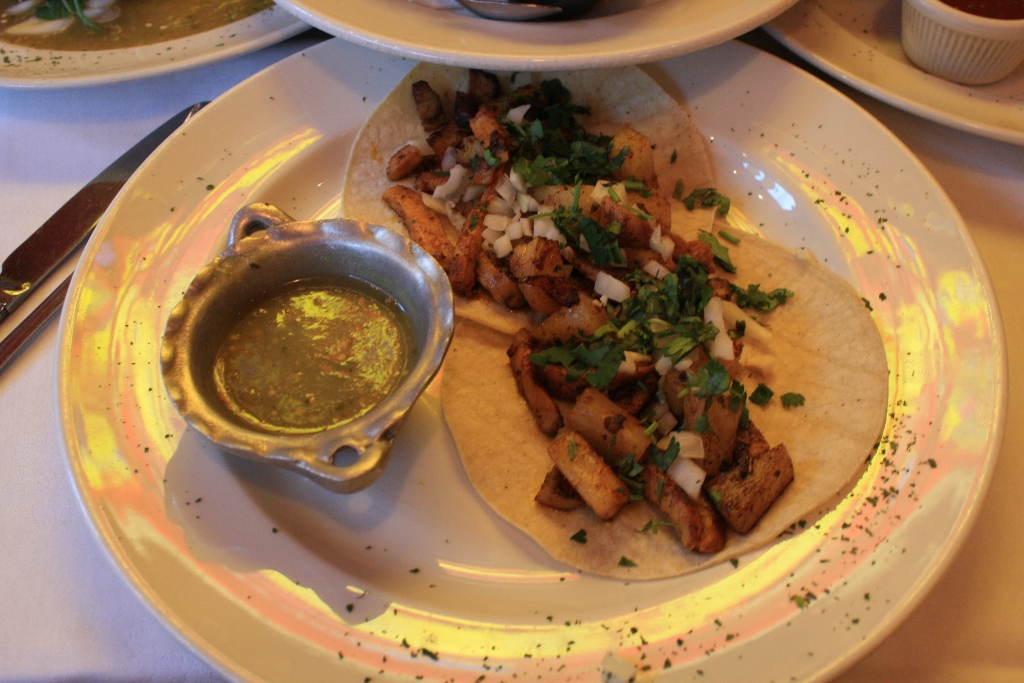 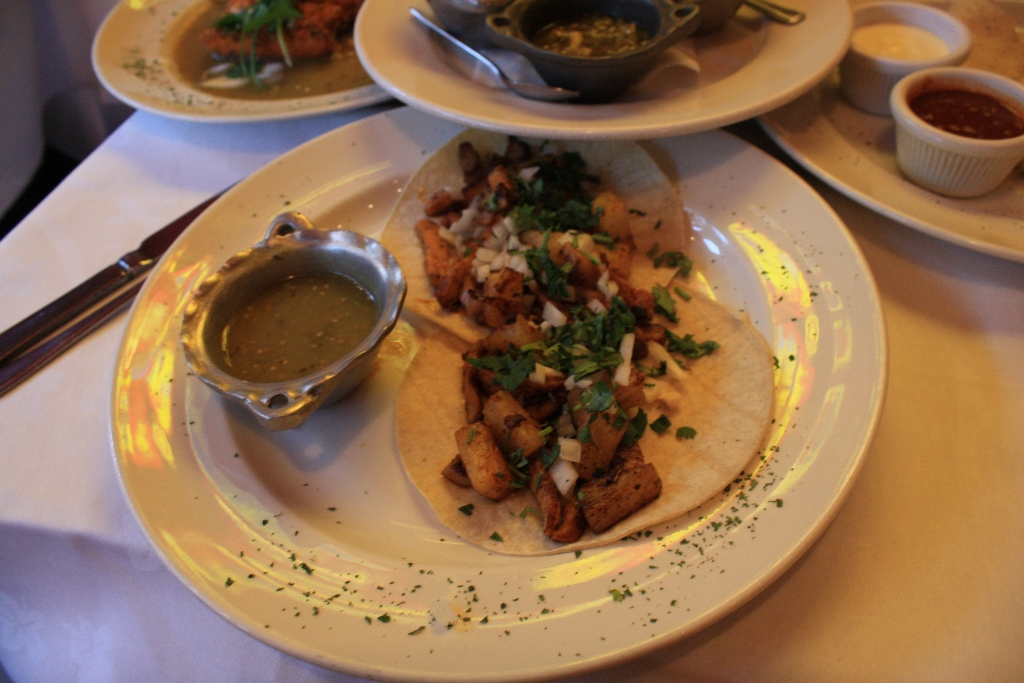 Max ordered a Los Tacos Pastor, traditional Mexican melt in the mouth marinated pork, served with chunks of pineapple in a flour tortilla. Although I’m a veggie, it did look rather mouth watering, and for £6.20, the portion sizes were very generous.

Also not content with just the one starter, he also opted for the Flautas, four rolled corn tortillas filled with deep fried chicken, topped with shredded lettuce, green salsa and sour cream. Mexican food perhaps isn’t the prettiest of sorts, but that doesn’t matter. Because what it lacks in appearance it more than makes up for in flavour.

After requesting a ‘cooling off’ period, our main courses arrived 10-15 minutes later, Max’s a Mixiote De Cordero – a shank of lamb marinated in Mexican spices, wrapped in a banana leaf and slowly cooked until tender, and mine the Crepas De Cuitlacoche, a mexican speciality known as Mexican truffles, thin crepe pancakes filled with black corn mushrooms, sauteed with onion, garlic, serrano chile and sweet corn, in a white cheese sauce served with grilled vegetables. 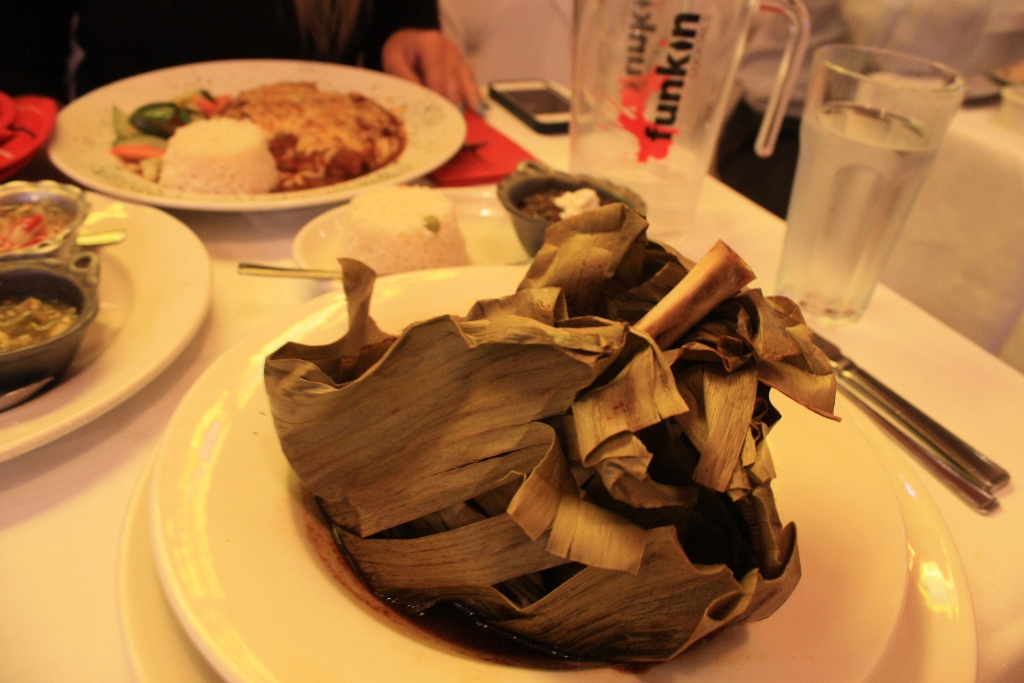 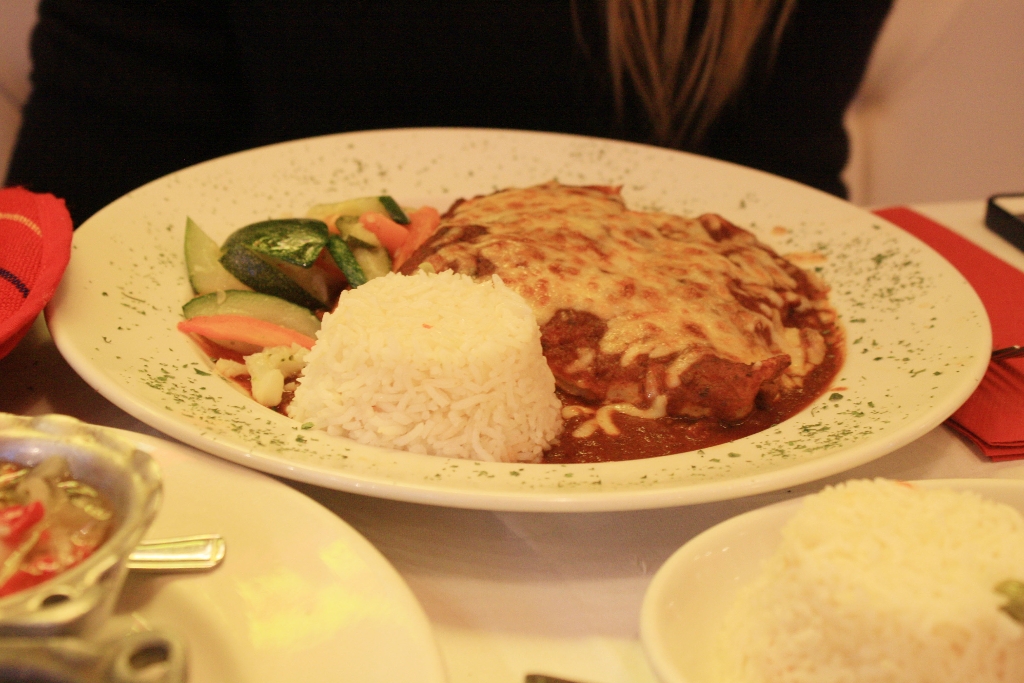 Although the desert selection looked unbelievably good, I was so full (I didn’t even finish my main) that I had to (sadly) overlook the last course, however I am planning to return, most definitely and hope to be able to trial the puddings next time!

Overall, my experience at Mestizo was one I honestly could not fault. The service was impeccable, friendly and helpful. By 8.30PM the restaurant was completely full, but the service staff handled it extremely well and tended to your every need. Instead of whizzing off at the drop of a hat, they took time to tell you about the food, where it originates from and what they’d recommend (including any light hearted warnings about which dips and dishes might be a little hard for some stomachs to handle). This not only made it extremely personal but also very fun, and despite going out primarily for the food, we came back with new snippets of knowledge about Mexican culture.

The restaurant itself is great value, especially for somewhere with such a central and easy to get to location, and they really do offer a unique experience which leaves you craving your next visit. Be sure to visit on your birthday, where they sing you ‘Happy Birthday’ with a mexican twist, before placing a sombrero on your head or for Sunday brunch, where £19 will provide you with as many spicey ‘hangover cure’ soups, mexican-style eggs and quesadillas as you can eat. Or if you’re not a fan of Mexican food, but do fancy a tipple or two, the Tequila bar downstairs offers the same delicious selection of cocktails and hosts its very own club nights!

To book, to see more or to view the menu’s, please visit Mestizo’s website here.