As someone who suffers from sensitive skin well knows – it is quite hard to find an affordable, fragrance free and effective face moisturiser these days that actually does the job it is supposed to do. There are copious amounts of products available, however it is difficult to know which to choose as the shelves of beauty stores are lined with moisturisers which claim to ‘hydrate’, ‘cleanse’ and ‘last for 24 hours’. After initially discovering I had sensitive skin, I decided to settle on the ‘Simple’ range, quite simply because of the name. The rows upon rows of face moisturisers are a little daunting when you are in a rush, and the bright white and green packaging looked friendly (ha ha).

So, up until now I’ve stuck to Simple. Whilst it’s not the most effective moisturiser I’ve ever tried, as the hydrating element of it only lasts several hours – it was the one product I’d tried that didn’t make me come out in a rash. However, when I was kindly sent a tub of Naked Skin Thirst Aid Moisturiser to try, I decided to ‘brave it’ and try it out. It claims to hydrate skin for 12 hours and is suitable for sensitive skin. Ingredients include Argan oil (yes, the stuff that’s supposedly good for your hair) and Shea butter (the stuff that smells good). Despite the lovely smell, the product is fragrance free and after trying it for a week I have been pleasantly surprised with the results. 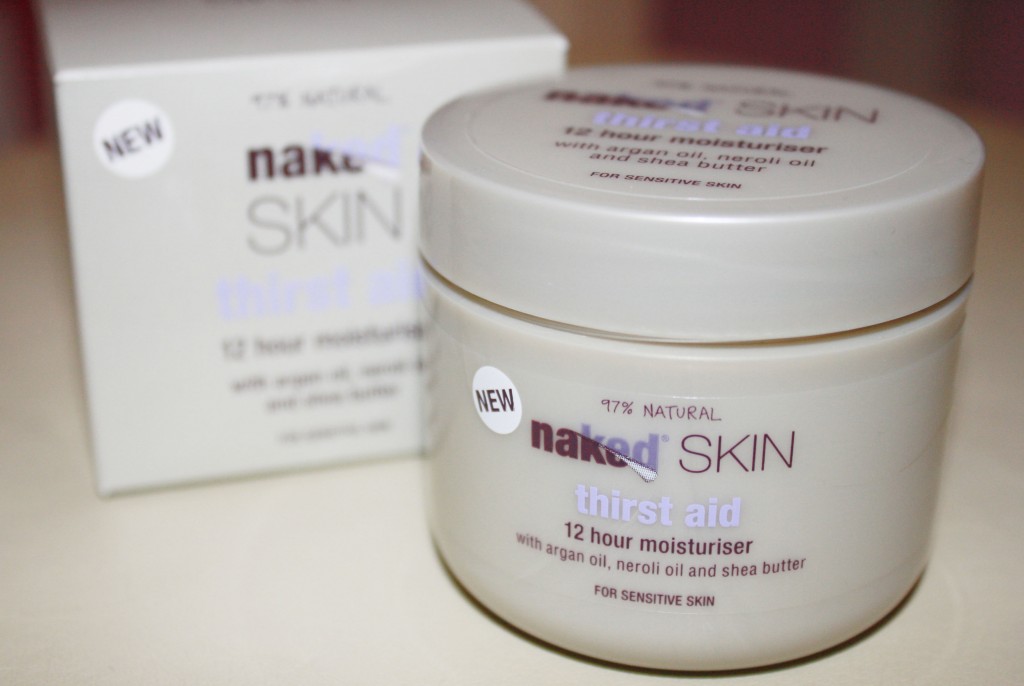 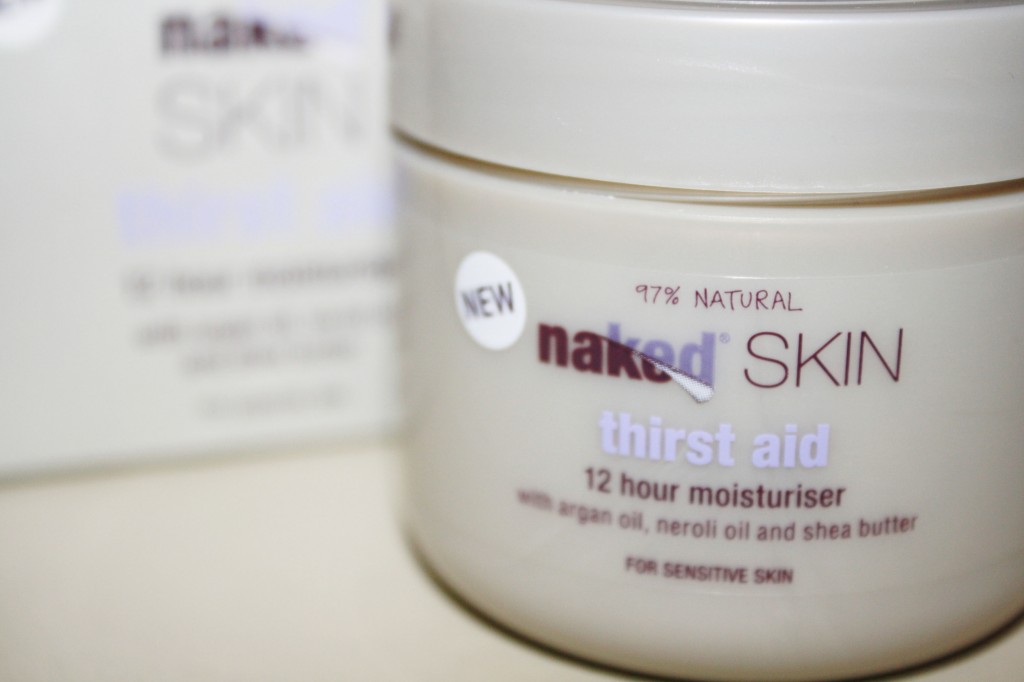 As well as suffering from sensitive skin, I also have quite dry skin on my face which isn’t ideal when trying to apply make-up. Normally, my Simple moisturiser will hydrate my skin up until the point of applying make-up (as I put on moisturiser ten minutes beforehand) but will then dry out and leave my make-up looking really uneven. I’m being completely honest when I say that since using Naked Skin Thirst, I haven’t had this problem at all and my base make-up (foundation, primer etc) apply far more easily now that the skin is soft and hydrated. This might sound like a rather simple discovery but I just think that the Skin Thirst gives far more hydration and for a longer period of time than my old moisturiser – which also means that my make-up stays looking fresher for longer. 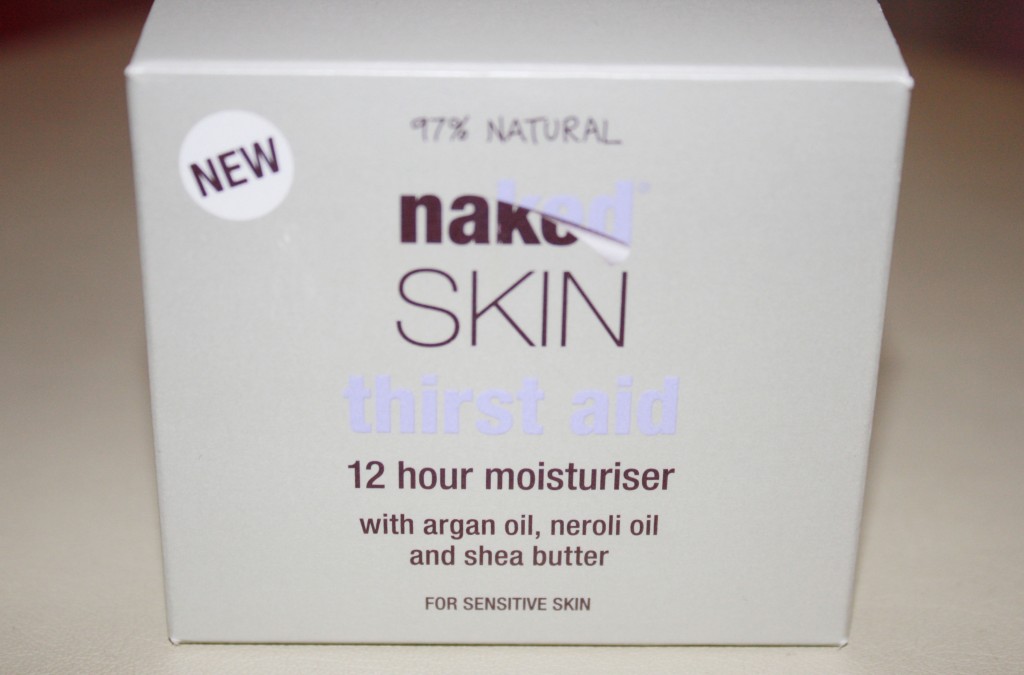 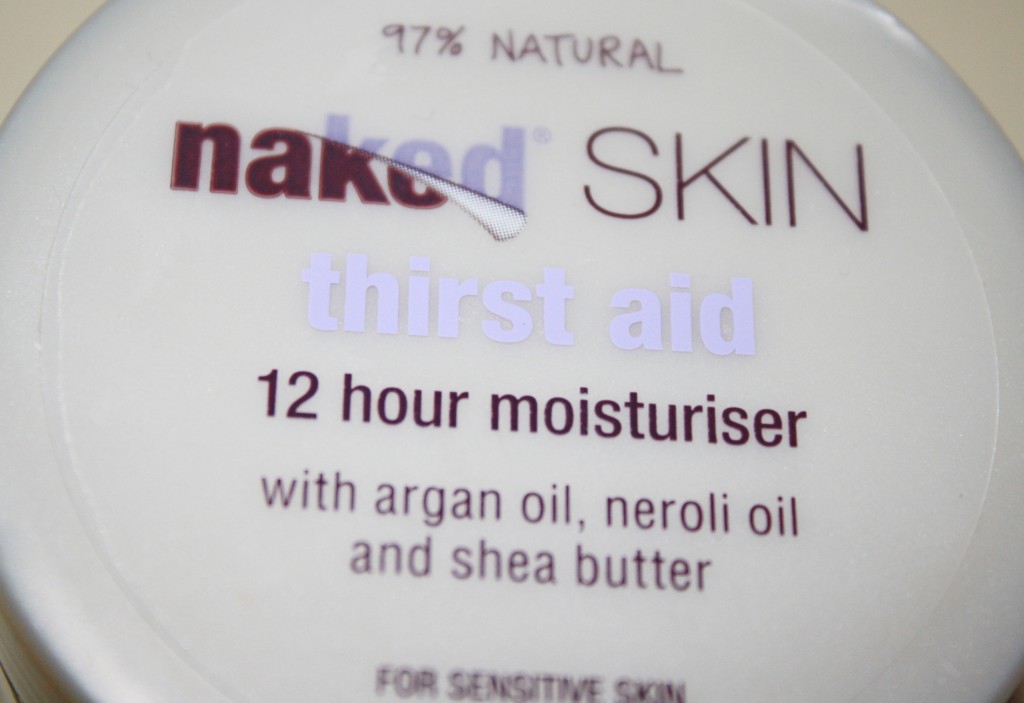 I did make a slight mistake when first using the product, as I slapped on far too much and ended up looking a little too greasy. Luckily my make-up didn’t slide off my face, but I now know the correct amount to apply. It is worth being generous when applying moisturisers, as each last for different time periods and if you are wearing under make-up, you ideally want your skin to stay hydrated for longer. I think it just takes a bit of getting used to!

With regards to my skins reaction to the moisturiser, I’m pleased to say that it didn’t flare up nor produce lots of spots (which some products too). I think this is largely down to the fact it is un-perfumed and fairly light wearing (despite being hydrating). It doesn’t feel unnatural or too heavy on the skin and keeps dryness at bay. Some might be a little hesitant about the Argan Oil ingredient of the product, as it is well-known for its use on hair and repairing split ends. All I can say is that despite it sounding like a strong ingredient for a facial moisturiser, it certainly doesn’t affect the claims made on the product. It doesn’t react with sensitive skin, it hydrates effectively and lasts for a good 12-15 hours without re-application. It’s also a very affordable product, at just £7.49. I have been using the tub for just over a week now and haven’t even made a dent in what’s inside. In fact, I’m still using what’s in the lid at the moment – so it’s definitely a lasting, effective and affordable product that I can happily recommend! 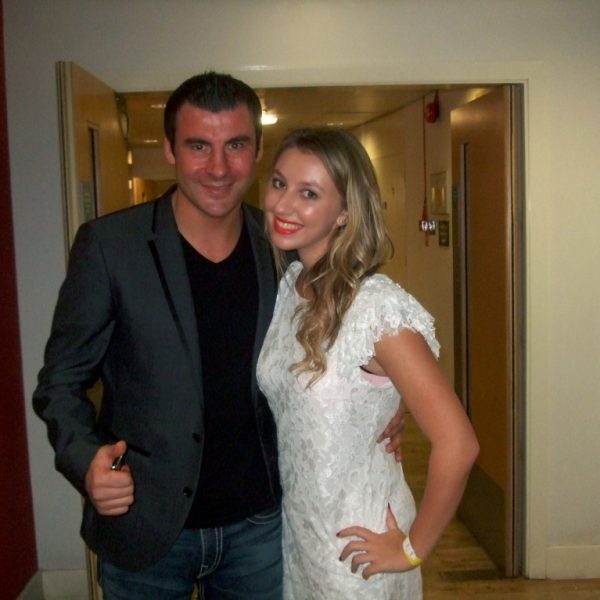 A response to THAT article