A few weeks ago, actress Joanna Lumley hit the headlines after she said ‘don’t be sick in the gutter at midnight in a silly dress with no money to get home, because someone will take advantage of you. Either they will rape you, knock you on the head or rob you’. She also told women not to ‘look like trash, don’t be sick down your front and don’t stagger around in the wrong clothes at midnight. I promise you its better to look after yourself properly’.

A women is raped every 9 minutes in the UK, which means that each year 69,000 women are raped. Around 1 in 14 of these rapists are convicted, the lowest conviction rate in the whole of Europe. Should what women choose to wear really decide how safe they are? The answer is a simple resounding no. Personally, I find it disgusting that this is even a debate.

My view of what Joanna has said means that she is saying because a girl is outside a nightclub, wearing a short dress and a pair of high heels, perhaps having had her hair done, with a little lipstick – that means it is okay to rape her? That she is a walking advert for rape? That she is practically inviting someone to rape her? No. Rape is the crime. Being drunk or showing a little leg is not. Sure, a sick rapist might target a specific girl who appears to be more vulnerable, may this be through her intoxicated state or her high heels preventing her from running away. But that is no excuse.

Are we trying to excuse rapists behaviour? Of course, we should make sure that we are safe when we are going out – but is it right to live in fear constantly and ‘rape proof’ our clothing?

Gloucester MP Richard Graham said: ‘If you are a young woman on your own, trying to walk back home through a park early in the morning wearing a tight, short skirt and high heeled shoes and there is a predator… if you are blind drunk wearing those clothes, how able are you to get away?’.

He continued, ‘It’s not about the impact of your clothes on a potential predator – it’s about whether the clothes you’re wearing make it harder to get away from a predator.’ So what he is trying to say is that when we are getting ready to go out, we need to make our clothes ‘rape proof’. We need to think about what we wear and make sure its not going to give a man the wrong impression and make sure we are able to get away from an attacker. Sorry, but I just don’t think that is the correct advice to be giving young girls of today. Are we trying to excuse rapists behaviour? Of course, we should make sure that we are safe when we are going out – but is it right to live in fear constantly and ‘rape proof’ our clothing? 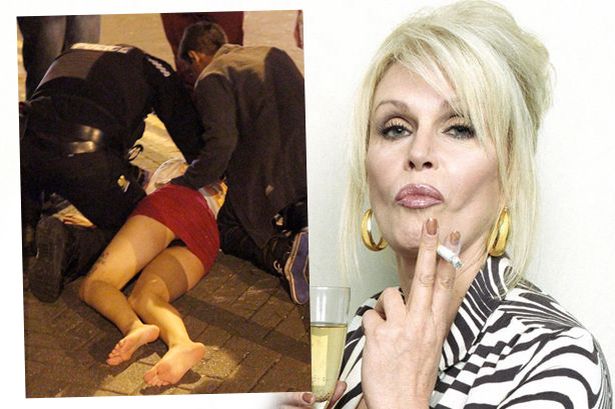 In a survey ran by The Telegraph, one in ten people said they were unsure about whether they would report a rape to the police. 2% of those asked said they definitely wouldn’t. The survey also revealed that younger women are more likely to blame themselves if they were raped. So, we already have a generation of women who live in fear – and wouldn’t report or persecute their rapist, should such a horrific event occur. Do we really need to be encouraging this? Surely we should be promoting that girls stick together, enabling that we are able to wear what we please (without being too over the top), and not be criticised for our decision to do so. The comments by Lumley and Graham only adds to the message being sent out to young women, whereby ‘if you are assaulted, it is therefore your fault’.

This strange attitude to what is such a horrible crime may also be having an effect on the attacker, allowing them to absolve the blame (oh, it was her fault – she was wearing revealing clothing) , allowing them to claim they were not fully responsible for their actions, which of course is untrue.

Women wearing trousers, tracksuits and burqas are also raped. And why should they absolve the blame on the victim?

However, it’s not all doom and gloom. Women are already standing up for female’s freedom of dressing how we please. In 2011, a policeman in Toronto told a group of Law students that in order to avoid being raped ‘women should avoid dressing like sluts’. Although this rather backhanded piece of information didn’t make the news immediately, his comment spurred on a ‘Slut Walk’ in downtown Toronto ten weeks later. This walk hit headlines in the US, the UK and Australia and led to thousands of women around the world standing up to highlight a culture where the victim rather than the abuser is blamed. Everyone is welcome at the walks, men included, all ages, all orientations, all races and religions.

The general message they are promoting (which is a far healthier one than Joanna Lumley’s) is that nobody tells us how to be women and nobody tells us how to dress. The belief that wearing a short skirt could lead to being raped is inaccurate, incomprehensible and downright ridiculous. Women wearing trousers, tracksuits and burqas are also raped. And why should they absolve the blame on the victim? It is disrespectful to all of the women that have survived an attack, making them feel worthless and unworthy of the respect that they deserve. 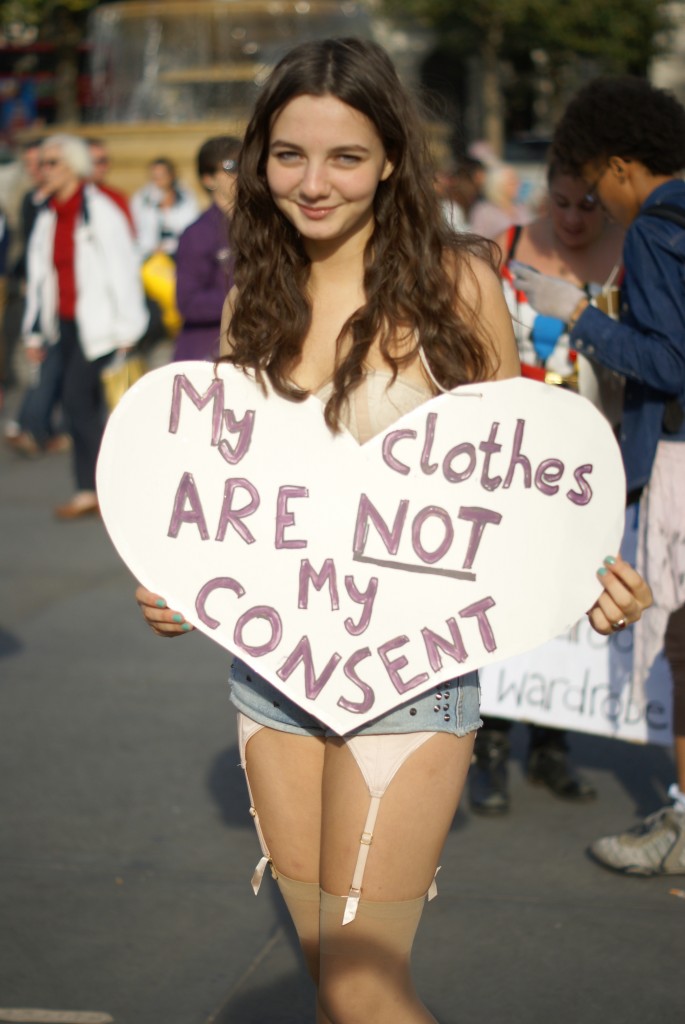 Everyday women are made to feel like the victim, they are told they shouldn’t wear certain things, they shouldn’t go to certain places or act in a certain way. This is all diverting attention away from the cause of the real crime – its creating a culture where rape is allowed to happen because ‘she did the wrong thing’ and therefore ‘must have been asking for it’.

This is what the Slut Walk is about – making women’s voices heard and letting the attackers know that rape is never okay and that there is never an excuse. Not even if she is wearing a skirt. Or high heels. Or make-up. Or is drunk and alone. Not even if she is naked and you know her. Or if she is your wife. And not if you thought she wanted to. No means no.

The Slut Walk are reclaiming the word ‘slut’ and trying to make sure it is used for its proper definition, rather than slung about to offend, blame and hurt. They are also saying yes. Yes to wearing what women want, yes to going where you want to go, with who you want and being able to express yourself in whatever way you please without the fear of being attacked and it being your fault. Yes to love, yes to having fun and yes to respect.

Definition of ‘slut’ from the Oxford English Dictionary (OED)

1: 1. a. A woman of dirty, slovenly, or untidy habits or appearance; a foul slattern. b. A kitchen-maid; a drudge. rare. c. A troublesome or awkward creature. Obs. 2. a. A woman of a low or loose character; a bold or impudent girl; a hussy, jade.

We believe that rape is always the fault of the rapist, never the survivor. And until that attitude is held globally, we will continue to speak up.

How To Eat To Make Your Gut Happy 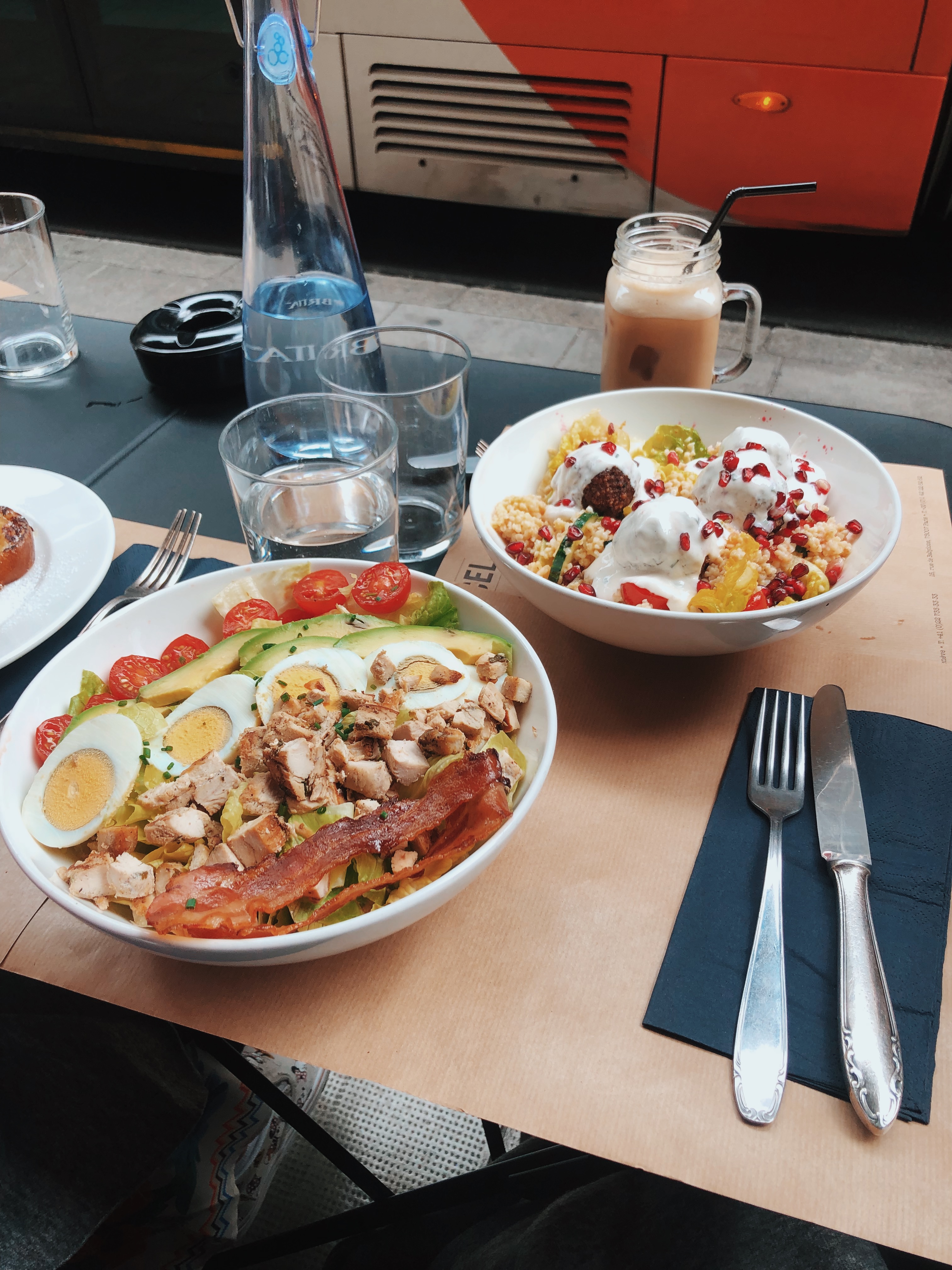