When I told my friends and family that David and I were going camping on the West Coast of America for 7 days – with strangers – the reception I got was confusion and laughter.

You see I’m not typically renowned within my close circle as being neither spontaneous nor adventurous.

And the trip was only a week away, having been booked one week prior.

Trek America has been on my radar for a couple of years now, as content from fellow bloggers has popped up on social media and similarly, old friends pictures have also captured my interest on Facebook.

But I never thought I’d be brave enough to go on a trek myself.

Because as much as my friends and family do have faith in my abilities (they’re not being harsh on me by laughing), several years ago going camping and hiking through the USA national parks would have been near on physically impossible.

In fact, three years and a half ago, I struggled to even leave my bedroom due to my severe IBS.

So writing this, having just returned from 8 days of laughter, new friends, several hundred pictures and a revived passion for being outdoors, I feel very proud and also inspired.

Because if I can do it and take so much away from it, there’s also others that I’m sure would benefit in the same way.

I’ve written all about the logistics of the West Coast road trip, the things we saw, the places we stayed here, but the trip also gave me so much more than that. 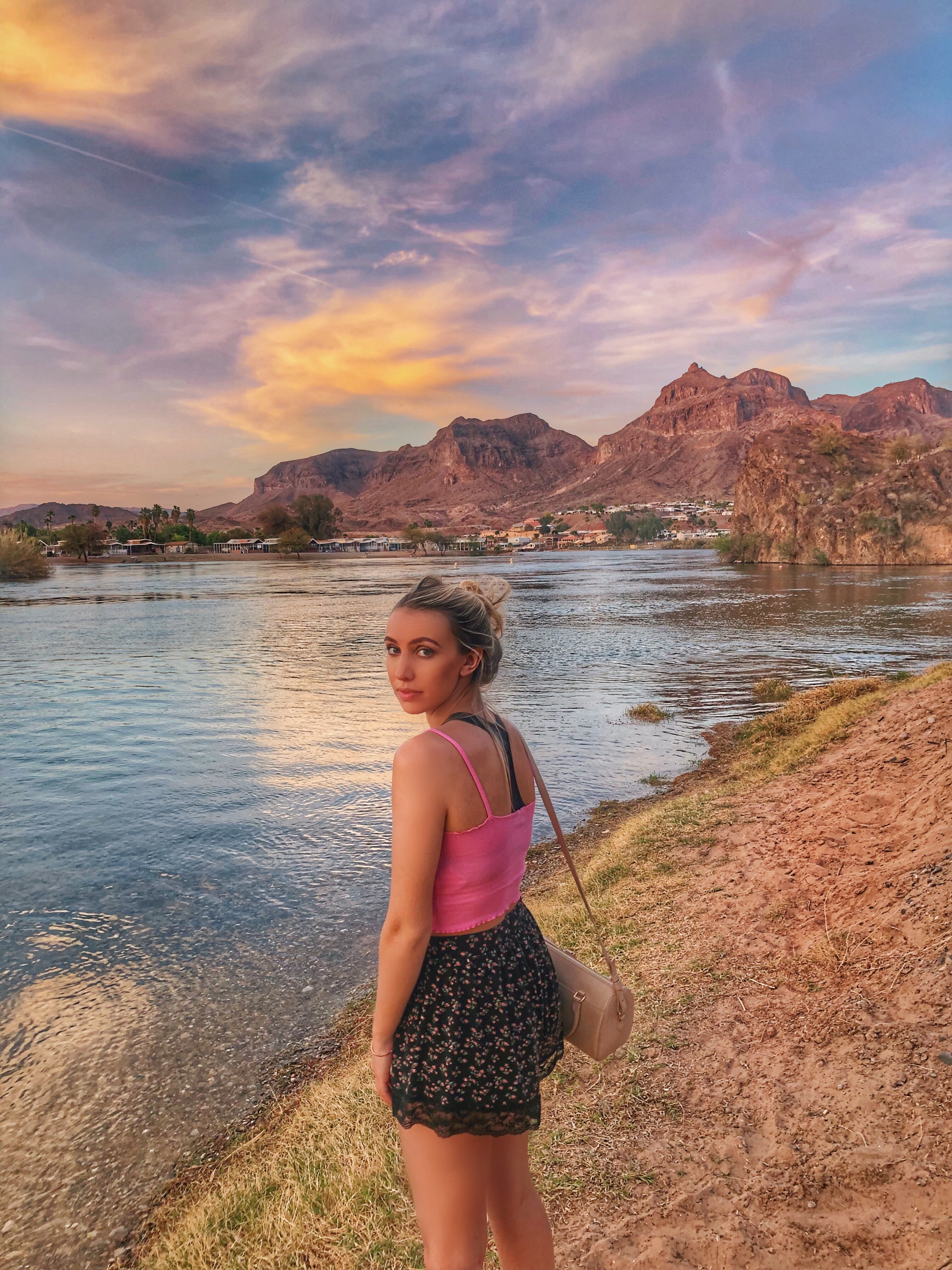 In fact, I vaguely remember there being a time in my life where I’d do anything NOT to go outside.

When my parents would suggest a walk in the park or a bike ride, I’d groan in horror.

Part slight rebellion, part because I wanted to stay indoors and play The Sims.

So it may come as no surprise to you to reveal that I’d never really been camping before. Not at a festival, nor with friends, nor with family.

I’d spent one night in my dad’s new tent in our garden once, with friends. But we snuck inside before midnight because it was too spooky.

So the camping aspect of our Western Wonder tour slightly terrified me.

I had visions of waking up in a puddle of water, my belongings floating around beside me while I froze in a sleeping bag.

I imagined the toilets would be miles away, dirty and cold.

I thought I’d be woken up in the night by hooting owls and then be too scared to sleep.

Basically, I imagined every possible hideous situation that I could conjure up. And I was convinced it wasn’t for me.

David on the other hand, is a seasoned camper – having served in the Marines for five years – so I took some reassurance that if he was with me, I might be able to stick it out.

But actually, the reality of camping really wasn’t so bad.

I won’t lie – I didn’t massively enjoy unzipping the tent and walking to the toilet in the night in the cold. But aside from that, everything else was so much fun.

Our group bonded over a camp fire, making s’mores in the evening and retelling our favourite parts of the day. We listened to jazzy playlists while sipping cider and sharing stories.

Putting up the tent each day gave you a sense of accomplishment and making breakfast each morning in the great outdoors felt very freeing.

The creations our tour leader Rick whipped up each evening and morning on the camping stove were pretty incredible. We had delicious feasts every day – and each of us mucked in to help prepare, wash, chop and cook. 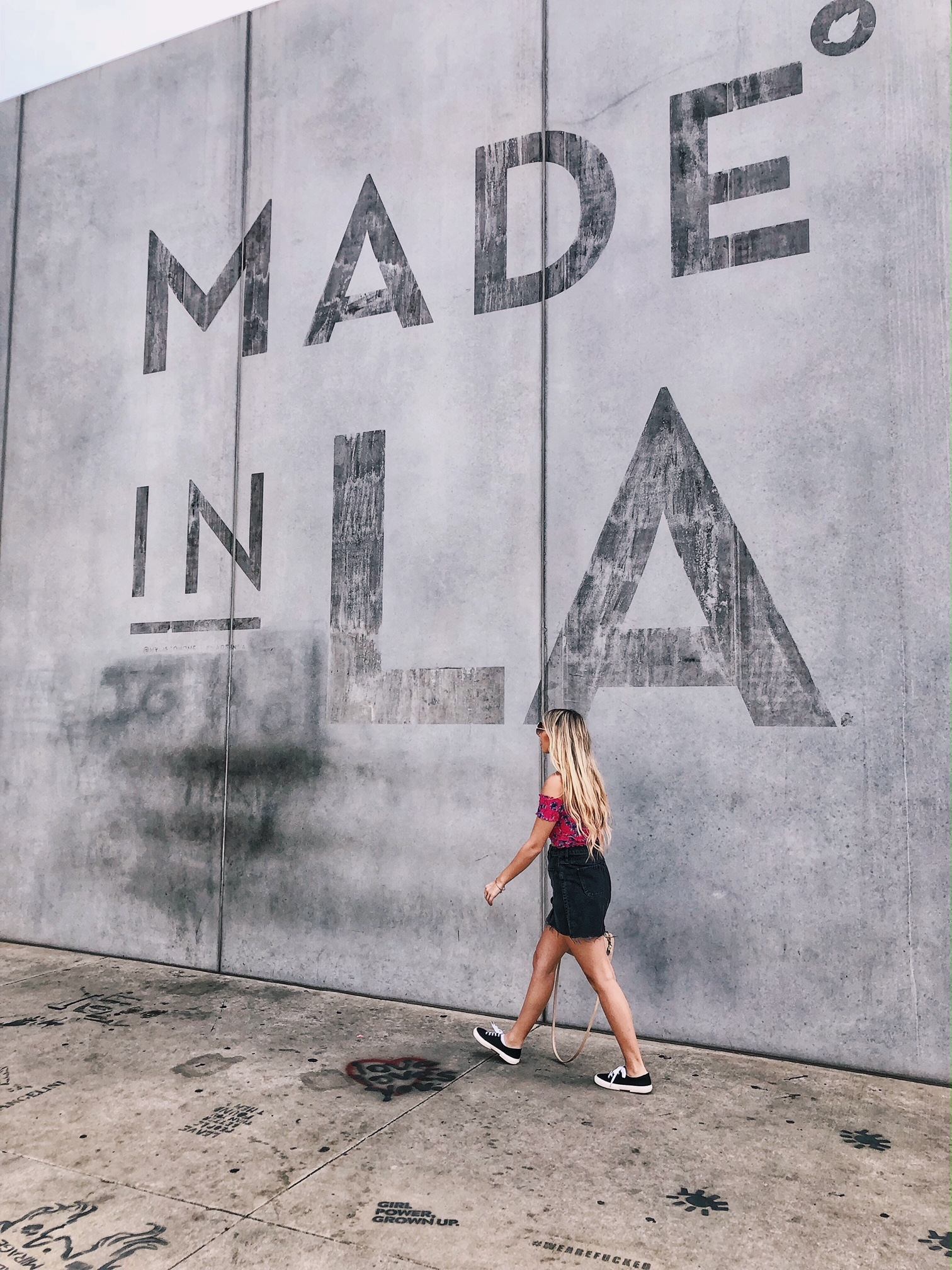 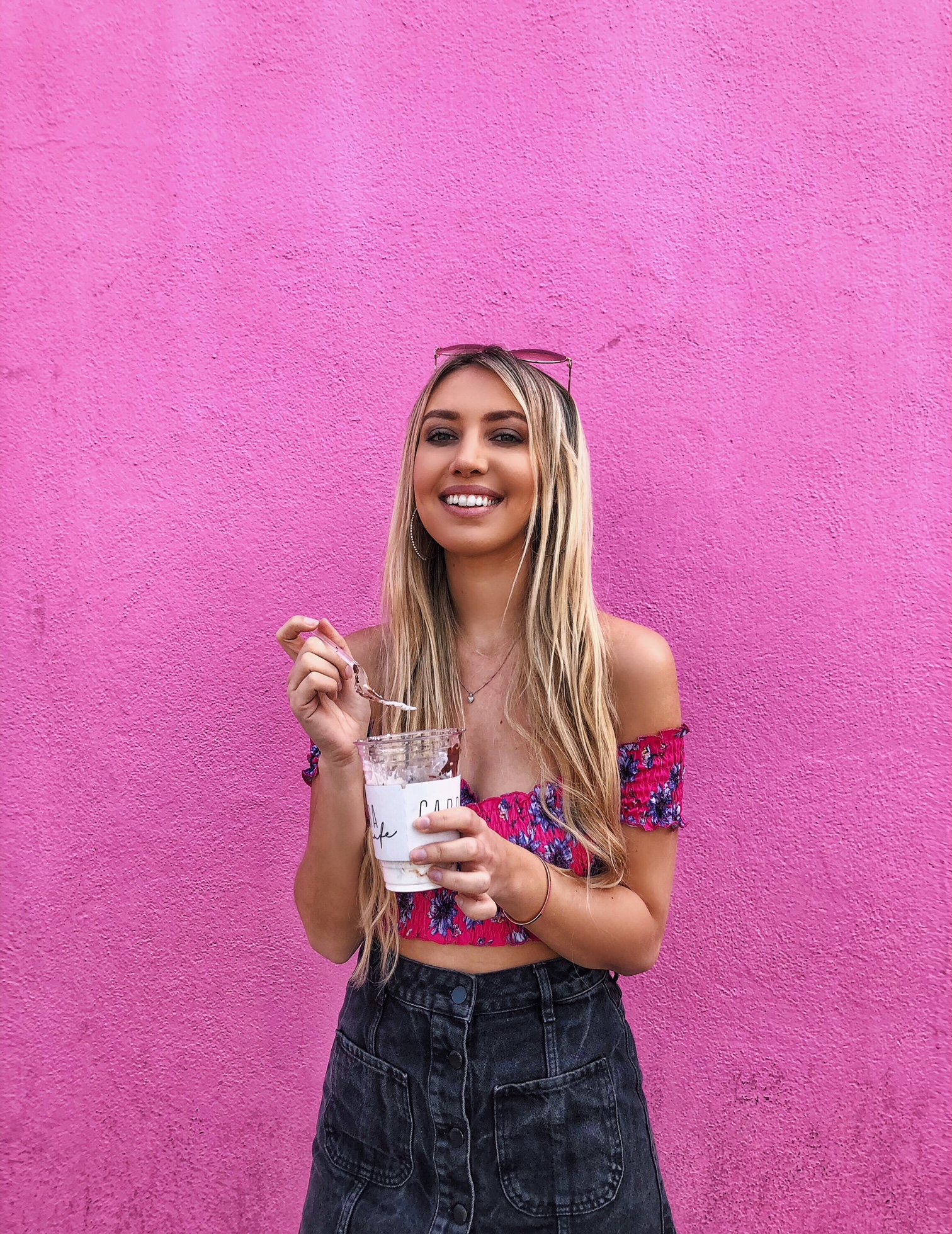 You can do anything if you put your mind to it.

As briefly mentioned above, three and a half years ago, I would have never have dreamed of being able to camp, hike and travel like we did on the Western Wonder tour.

I was in my second year of University and my IBS was so awful that I was bed-bound most days, contemplating quitting and returning home so that I could at least be poorly in the comfort of my family home, rather than a home I shared with people who I felt uncomfortable around.

I missed 99% of my lectures and classes that I was paying £9,000 a year for and I felt hideously guilty that I was letting my friends down for ALL social occasions.

It was the worst time of my life and in my head, I’d put all of my travel dreams on hold.

Luckily, through my own research I managed to slowly improve my symptoms (you can read more about this here), but yet still a camping trek around America would have never have been something I thought I’d be able to do.

Public toilets, or driving on a bus with strangers and no toilet, would have filled me with complete dread.

So completing the Western Wonder tour was all the more proof to myself of how far I’ve come. Minus a few tummy issues on the last day, I was pretty much symptom free for the majority and could enjoy it like every other participant.

And the sense of achievement in our group didn’t just end with me. I know there were others who also never thought they’d be able to do something like this due to health issues and so completing it, was even more rewarding. 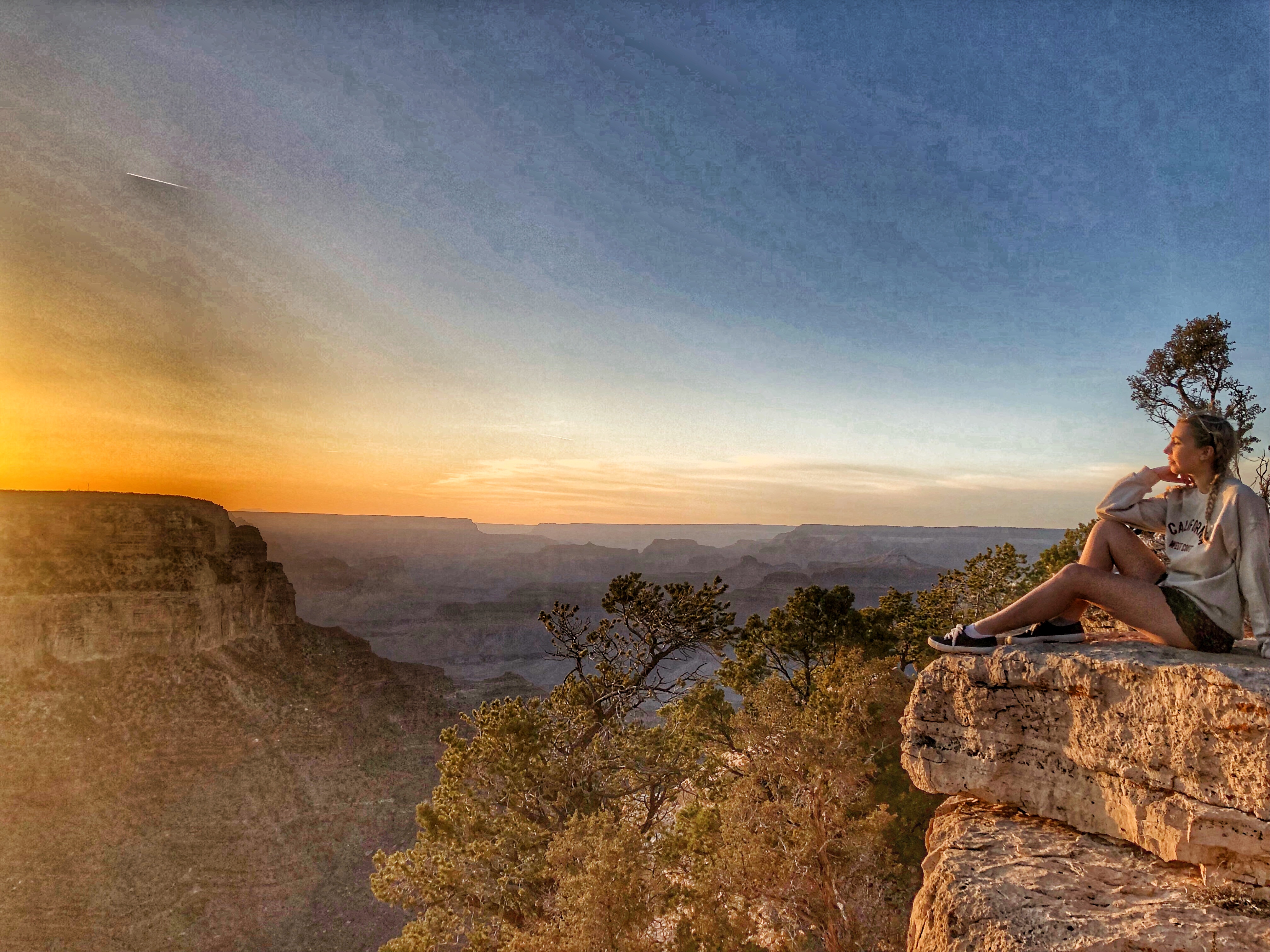 We’ve all had experience working within a team. Whether it’s at work or in school, there are always times we have to work with others in order to achieve something.

But when you’re bundled together with a group of strangers – some of whom have come in pairs, others alone – the power of coming together as a team is even more evident.

I was so proud of my boyfriend David for his involvement in the team, looking after other members of the group, assisting when needed, providing words of encouragement during the tougher hikes (which admittedly, I did sit out) and loading up the van each morning.

Everyone harnessed their own strengths and looked after one another – and it was really heart warming to see.

Even as a couple, it was lovely for us to get involved within a wider group and make our own friends, do our own thing and still enjoy it together. It somehow felt more relaxed and less intense than our usual travel adventures. 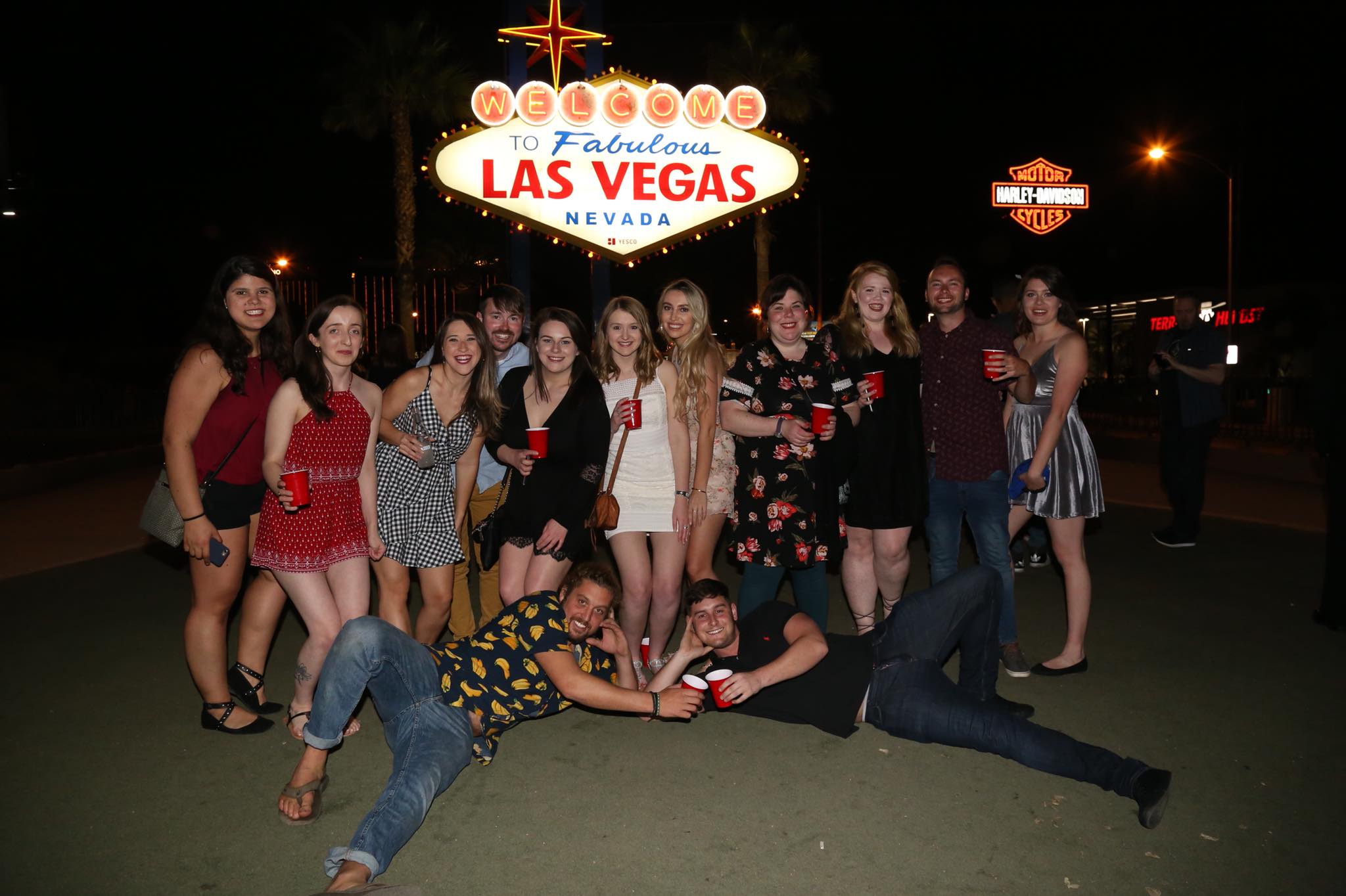 This was a big one for me, because as you guys already know – social media is my job and often it can become quite all-consuming.

There is so much more to life than how many Instagram likes your picture gets, but when it’s an indicator of your worth within a very saturated industry, it can feel extremely disappointing when content you’ve worked hard on doesn’t quite get the reaction you anticipated.

It was so lovely to be away with 11 others who weren’t bloggers and therefore who weren’t attached to social media constantly like we tend to be.

This in itself taught me to open my eyes a little more, put down the phone, stop worrying about whether the picture is ‘pink enough’ and ‘fits with the feed’ and enjoy the experience, in the moment.

This did mean that I probably didn’t get as many pictures as I normally would, but I did have a much better experience and there are so many incredible memories that I’ll take away from the trip that I probably wouldn’t have if I’d just been trying to capture it on a tiny screen.

It was also so interesting to see things from the perspective of people who aren’t constantly capturing their lives and turning it into content.

It had a really positive effect on me and I feel much better and a lot calmer as a result.

Travelling as a group makes you see travel in a new light.

I usually travel with David, friends, family or as part of a press trip, so I’m used to a variety of different situations.

However the Trek America group is a really unique experience and they seemed to have harnessed the ability to create an itinerary to really bond everyone together.

It’s a little bit like starting school or University for the first time.

You know you’re all in the same boat, which takes the edge off – but because of the fact you’re together 24/7, in the van, in tents and cooking dinner together you become very close, very quickly.

You see things from as a collective bunch of eyes rather than just your own, and this really heightens the experience with a constant shared buzz of exhilaration. 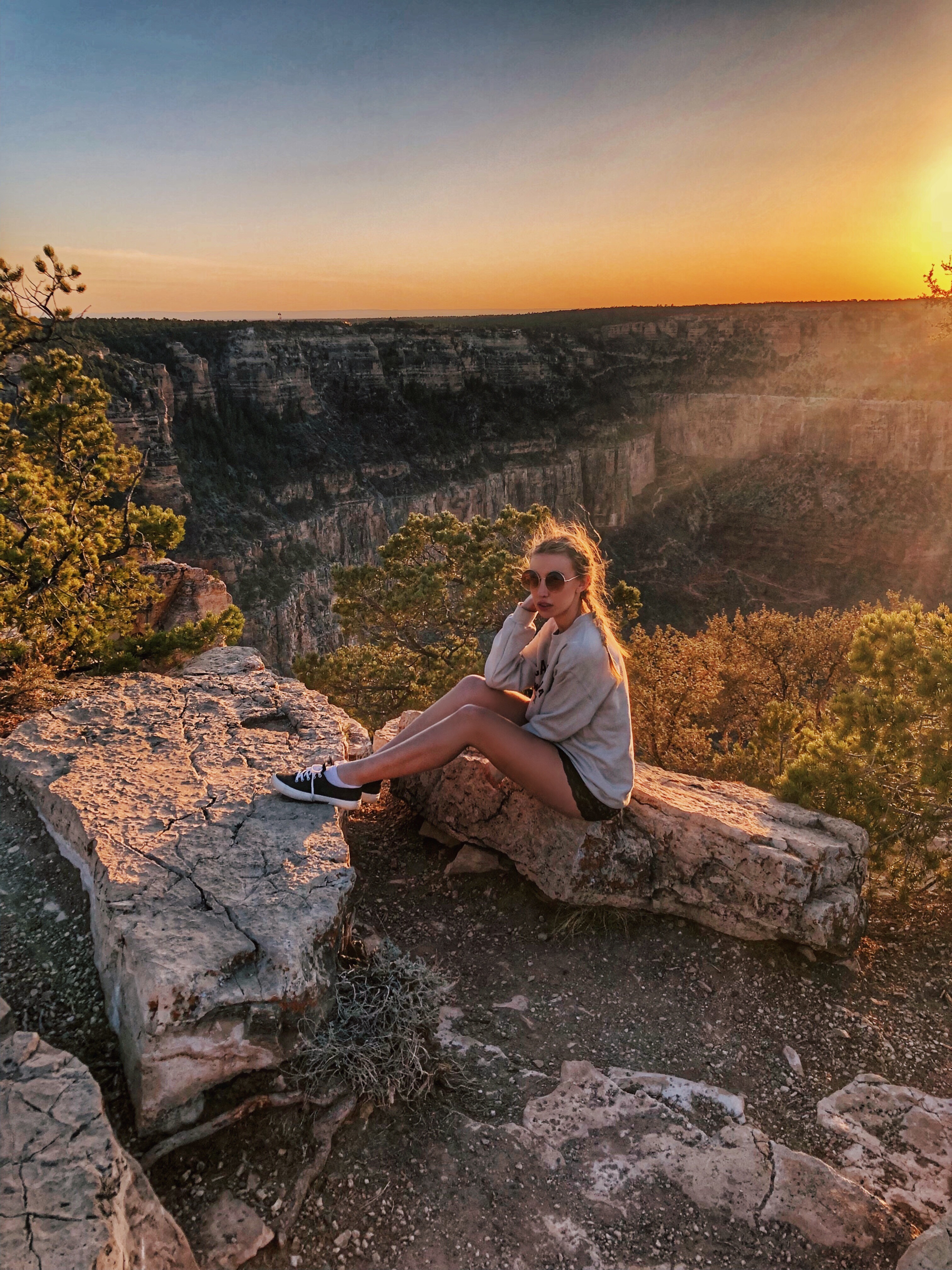 Road trips don’t have to be stressful.

David and I have done a couple of individual road trips over the last few years and while many have been enjoyable, I think we’d both admit that they have been quite stressful.

Because I’m not the most confident driver, he always takes the wheel while I take up the role of navigator, which with my awful sense of direction – isn’t always the best pairing.

In America, driving on the other side of the road while trying to battle a bit of jet lag can be very taxing and so we really enjoyed that Trek America’s tours take the stress of logistics away from you.

All that you have to do is enjoy it.

Rick, our tour leader, was so knowledgeable about every destination we visited. He struck the perfect balance of being professional, reassuring and organised, but also fun, charismatic and entertaining.

He drove us through Route 66, Las Vegas, LA, San Francisco, Yosemite, Death Valley and Parker, sometimes for hours on end.

If we’d have been doing this ourselves, we probably would have been too stressed to absorb the incredible scenery we were we driving through.

So this aspect in itself was well worth booking onto the tour for. 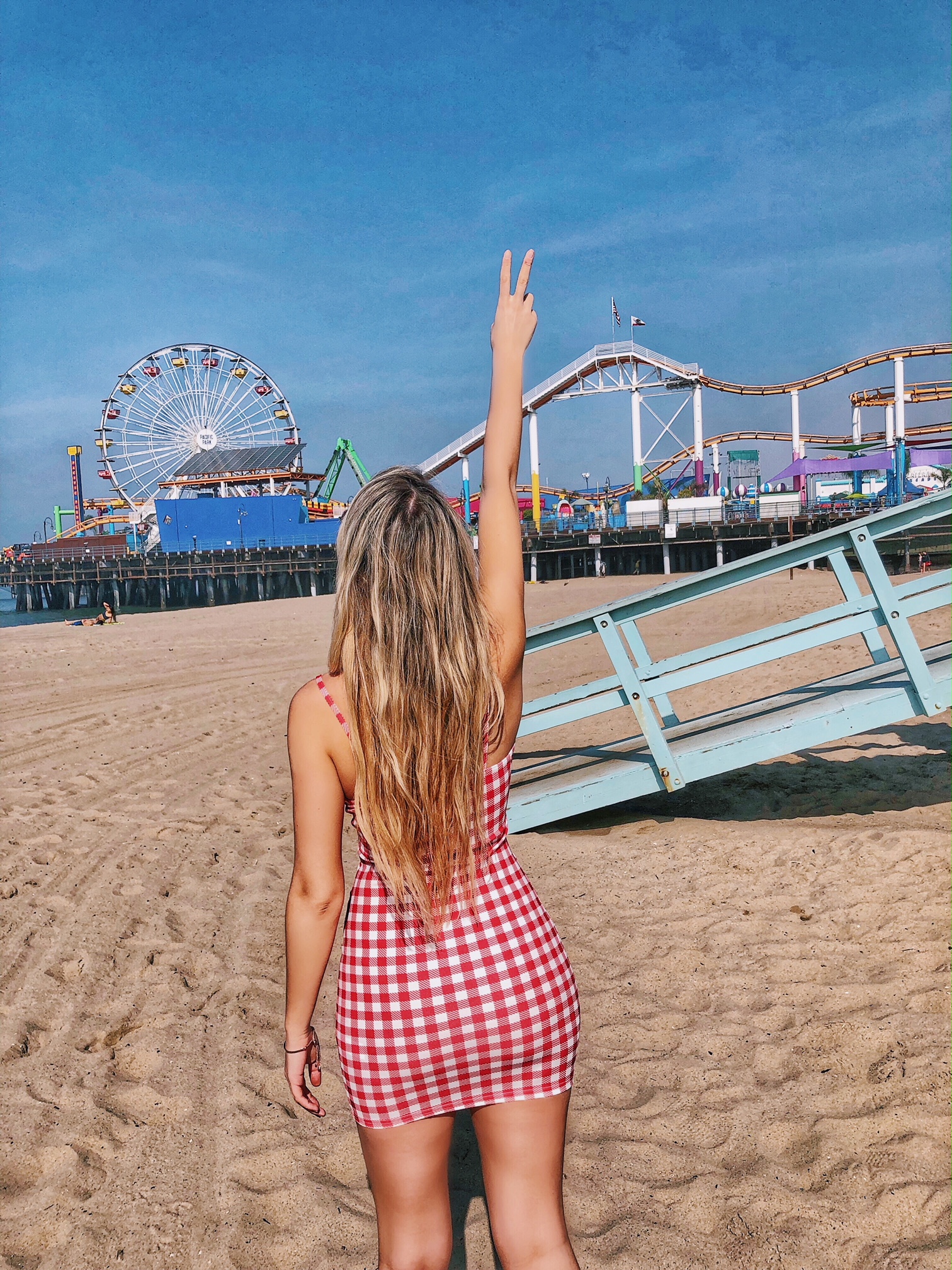 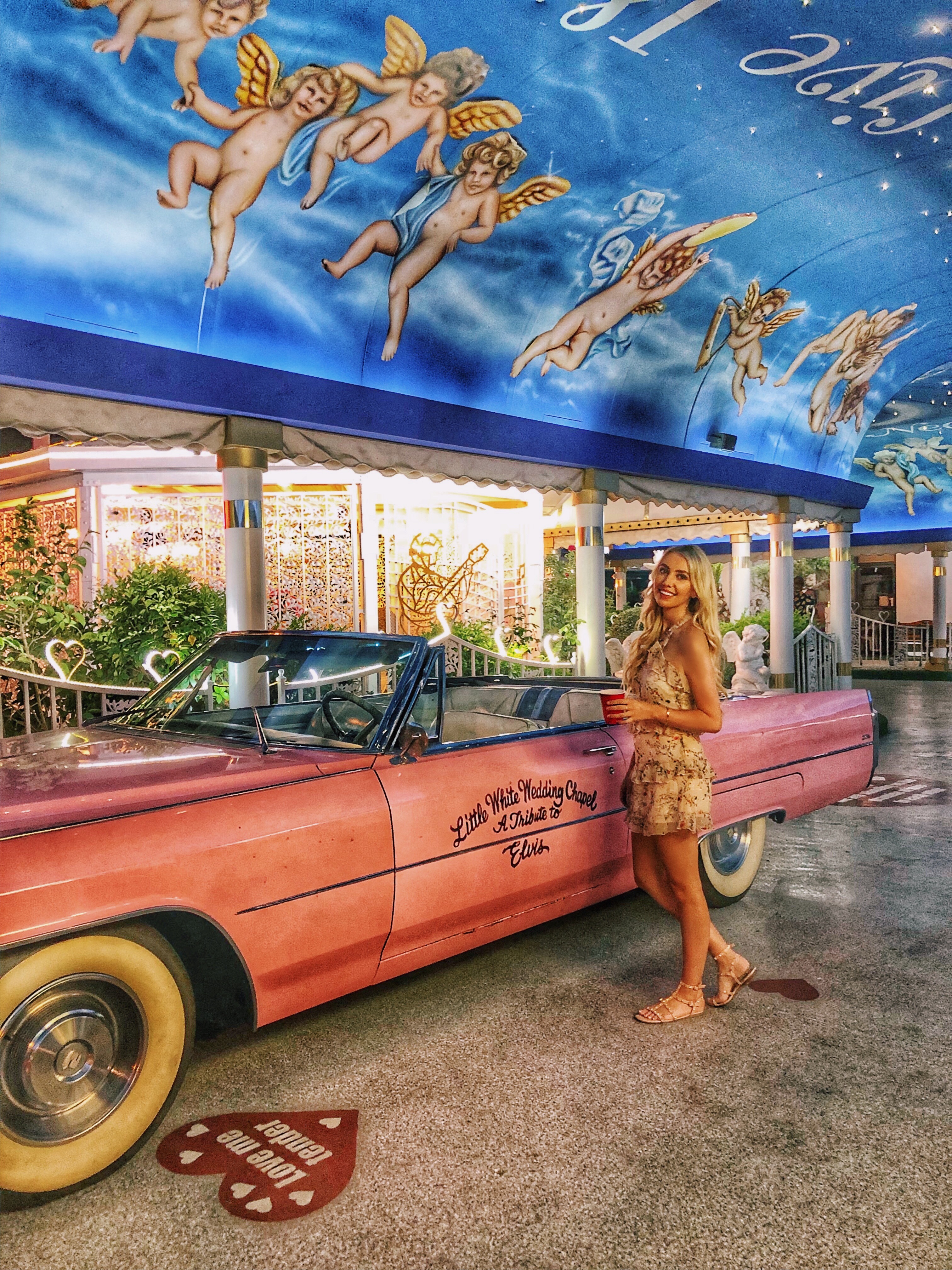 A sense of adventure can be sparked inside anyone.

Perhaps a slight misconception is that you need to be a student, backpacker or adrenaline junkie to enjoy a trip like this.

But I can confirm I am none of those things and still had an absolutely fantastic time.

Our group was a mix of ages, interests and aptitudes.

The trip itself is very accommodating to all abilities and there was never a time I felt pressured to take part in an activity I wasn’t comfortable in.

However, being in the group, with Rick as our enthusiastic leader, a newfound sense of adventure sparked inside of me.

Rather than worrying about things, I started looking forward to them and basking in the collective exhilaration of the group.

Every sight, every new destination and every stunning surrounding was met with a whisper and a buzz of genuine excitement.

So in a nutshell, my experience far surpassed my initial expectations – if you couldn’t tell already!

David and I are already talking about booking another one, though the only difficulty is choosing which tour, because all of Trek America’s offerings sound incredible in their own way.

Everyone will have a totally different experience and that’s the beauty of it.

What you’ll learn from your trek will probably be slightly different to my own.

My only regret is not booking one sooner. 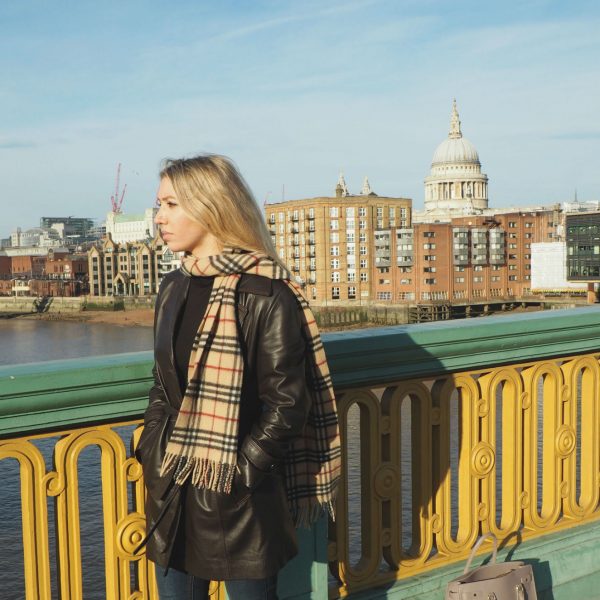 5 Reasons You NEED To Stay At A Sandals Resort 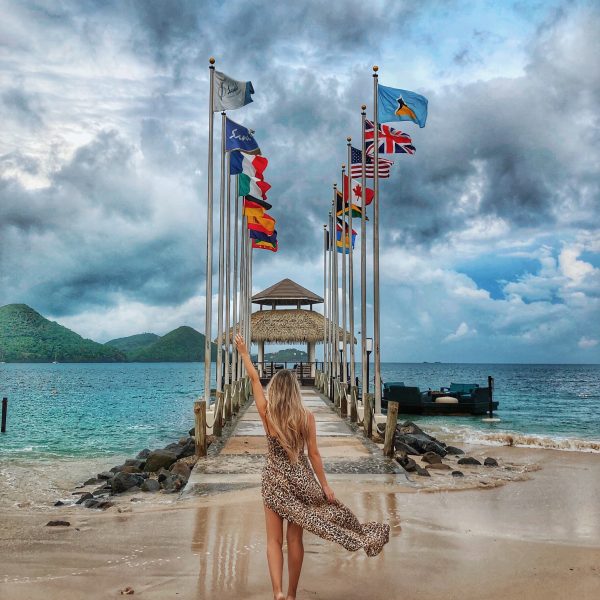