My last IBS post was all the way back in May (which you can read here if you fancy), when I went through a rather painful procedure to get to the bottom of my symptoms (no related pun intended). It was a bit of a last resort really. Although the results came back as all clear – which was a complete relief, as I did think the severity of the symptoms I’d been getting equated to something more sinister – it was frustrating to not have any other information other than the rather generic ‘IBS’ diagnosis.

Several months on and I’ve had something of a breakthrough. I’m not cured, by any means – as the symptoms are still there, but they’re not at the forefront of my mind, nor do they hold me back in everyday life as much as they used to. Perhaps it’s just because I’ve finished uni for the summer and I’m less stressed, or that I’m at home rather than in a place I felt uncomfortable, I’m not sure – but all I know is that I feel more ‘normal’. I don’t plan my life around whether there’s going to be a bathroom there and whether it’s going to be an awkward situation I’ll feel uncomfortable in if I have to run out.

Of course, the anxiety is still there. It probably will always be. I do panic about the symptoms returning quite regularly. I’ll think ‘Ooh, I’ve had a good few weeks – it must be about time IBS reared its ugly head and ruined things’, but I’m managing.

Since giving up gluten, dairy and refined sugar, I’ve regained a lot more control and I feel more like ‘me’. I still get the stomach pains, in fact – when I was on a press trip recently, we were in the middle of a climbing activity and I felt a wave of pain come on in which I knew, things were only going to go downhill from there. Luckily, we had a medical professional with us, who advised me to drink as much water as possible, take off the tight harness I was wearing and lie down. It went away within the hour.

However, I think I’ve come to terms with the fact that IBS is always going to be a part of my life – like it, or lump it. Some people suffer really badly with migraines, back pain or breathing problems – my ‘health flaw’ is that my stomach reacts to every minor thing and causes a great deal of pain, embarrassment and discomfort.

In fact, the embarrassment in particular is the one I’ve had the most trouble dealing with – especially growing up when I hid the fact I suffered from digestive issues from everyone but my mum. Now, I chat about it to anyone that will listen (as I’m sure you’re aware from my rather long, waffly blog posts about it). It’s actually really nice to be frank about it and not make excuses. Why should I? I think getting over the embarrassment of it is a massive hurdle in the right direction. This video by Buscopan (as in the medicine) is a really good place to start if you want to jump over this hurdle, as it features lots of IBS sufferers talking in a very matter of fact manner about their symptoms. They’re all just everyday people – and it makes you realise, that you’re not alone – and you have nothing to hide!

Managing it on a daily basis, especially if you’re pushing through a really bad bout of it, isn’t the easiest thing, I’ll admit. I have the worst willpower on the planet. I’ve been on every diet imaginable in a bid to resemble some sort of Victoria’s Secret model (never going to happen), but after a few weeks, it’s game over. However, when it came to sorting out my health and my IBS, the overwhelming sense of regaining some sort of control in my life and feeling well again was the only motivation I needed. I started my new diet at the beginning of April and it’s now nearly the end of July. It takes awhile to see and feel a difference.

If you’re at your wits end and don’t want to fork out loads of money on an allergy test (which is pricey but did really help me), then I’d definitely recommend starting with cutting out the common allergens. Eggs, Dairy and Gluten. I actually find I can tolerate some forms of gluten, if it’s freshly made – but I prefer to leave it. Here’s the kind of thing I eat on an average day.

Oat bran porridge with rice milk, with strawberries and honey.

Pop four scoops of oat bran into a bowl, with around 100ml of rice milk (I use the extra calcium version which is naturally sweet and really filling). Chop up some strawberries and pour on a dollop of honey. This is my favourite breakfast – which oddly, I always really look forward to eating. Sprinkle a bit of chia & flaxseed mix (this combo from Superdrug is a really great way to get this affordably – as they’re usually about double the price, but they last forever) for extra fibre and protein.

Buy the full-fat hummus, none of that low-fat stuff. Fat isn’t your enemy, unless it’s saturated. Usually the ‘diet’ stuff has lots of nasty chemicals that don’t agree with your body. Remember, it’s about eating to make your body happy not thin. I often devour a pot of hummus a day. 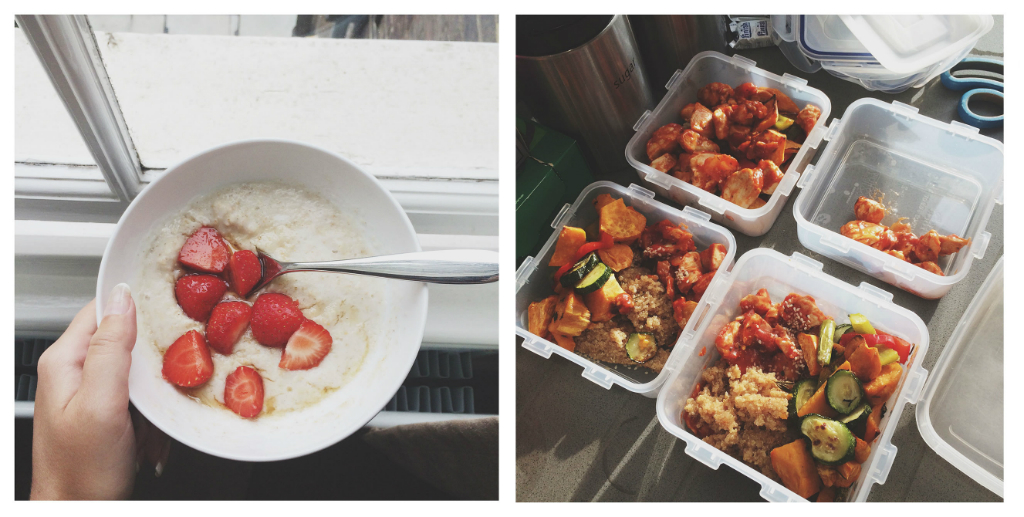 Okay, so it sounds a bit boring – but it’s actually really delicious. Even my mum loves this one! Fry off some chicken with a teaspoon of olive oil (I usually dry-fry it but olive oil helps retain some moisture) and slowly add in some plain tomato passata, basil, pepper, pink salt and garlic. You can add onion if you can tolerate it but I try and avoid it if I can. When the sauce is ready, sprinkle over a generous helping of sesame seeds (I can’t get enough of these) and leave to cool. Roast veg wise, I use sweet potato, courgette, red peppers and asparagus – topped with fresh rosemary and thyme – popped in a hot oven for 20 mins. Cook the quinoa plain – to be enjoyed with your sesame chicken sauce! You can make up big batches of this to take into work/school for lunch. It’s delicious!

Melt in the middle chocolate mug cake and coconut cream.

If you’re really craving something sweet or need a replacement ‘chocolate fix’, then my go-to is a little invention which I now consider better than the family-size pack of Galaxy I used to consume on a daily basis (yes, honestly). Get yourself a mug and pop in one tablespoon of cacao powder (be sparing with this stuff, it’s quite bitter – at first, I’d pop in loads and wonder why it was so disgusting. It might be the raw form of chocolate but it’s not the same as cocoa powder – sorry!), 2 tablespoons of buckwheat flour (contrary to the name, it’s wheat/gluten-free), about 75ml of rice milk and 2 tablespoons of pure maple syrup or honey (more if you want it sweeter). Stick it in the microwave for about 1 minute and while it’s cooking away, dollop a spoonful of CoYo Vanilla Bean Yoghurt into a bowl. It’s essentially coconut yoghurt but it’s not overwhelmingly coconutty because of the vanilla. It honestly tastes like cream and it’s amazing once you’ve scooped out your steaming melt-in-the-middle mug cake into the bowl too. Now I will warn you, this isn’t the most picturesque of desserts. But it’s absolutely delicious.

If you’re eager to try out this new diet plan, my friend Georgia has some fabulous vegan, gluten/dairy free recipes on her blog which taste (and look) incredible. She too is an IBS sufferer and has overhauled her diet in a bid to feel better. She’s actually studying nutrition too, so knows her stuff!

I’ve given up on most prescribed medicines, as they did me more harm then good but there’s been several supplements and herbal remedies I’ve tried which I’d like to comment on, as some have really helped. Again, I’m not going to claim anything is a miracle cure, because I think it’s unfair to give anyone false hope, especially when it’s in regards to something like IBS, which is a pain on a daily basis.

The first thing I’ve found to be super helpful, especially if you’re predominantly IBS-D, is milk thistle. It’s actually a traditional remedy for upset stomachs, indigestion and over-indulgence, however the milk thistle plant is predominantly a liver detox-er (not sure that’s a word as it’s spell-checking me, but we’re making it a word for this occasion!). I’ve found it’s super helpful if I’m having a really bad bout and it’s uncontrollable. Usually, it calms things down pretty instantly without bunging you up and leaving you feeling bloated.

Other traditional remedies include ginger, which I’ve heard lots about. Apparently it helps with stomach inflammation, calming down any irritation and pain. If you don’t fancy chomping on a large stick of very strong ginger or ingesting a sugar ridden (but delicious) gingerbread man then another option may be to try Gin Gins, which I’ve spotted in Holland and Barrett on my last few trips. They’re vegan, gluten-free and pretty much just a ginger sweet (without the added sugar). They’re super easy to pop into your handbag and chew when you feel that dull ache in your stomach start to return.

Similarly, there’s a number of gels you could use, also available from health food shops – which helps both the IBS-C and IBS-D fluctuations. Taken in water (usually they have sachets you can dissolve), they can calm the gut lining (which is often very sensitive in sufferers and needs a helping hand to get back to normal) and decrease that painful bloated feeling. Silicea Gastro Gel looks like a good one to try – and there’s lots on the shelves of Holland & Barrett that you could experiment with until you find the right one for you. 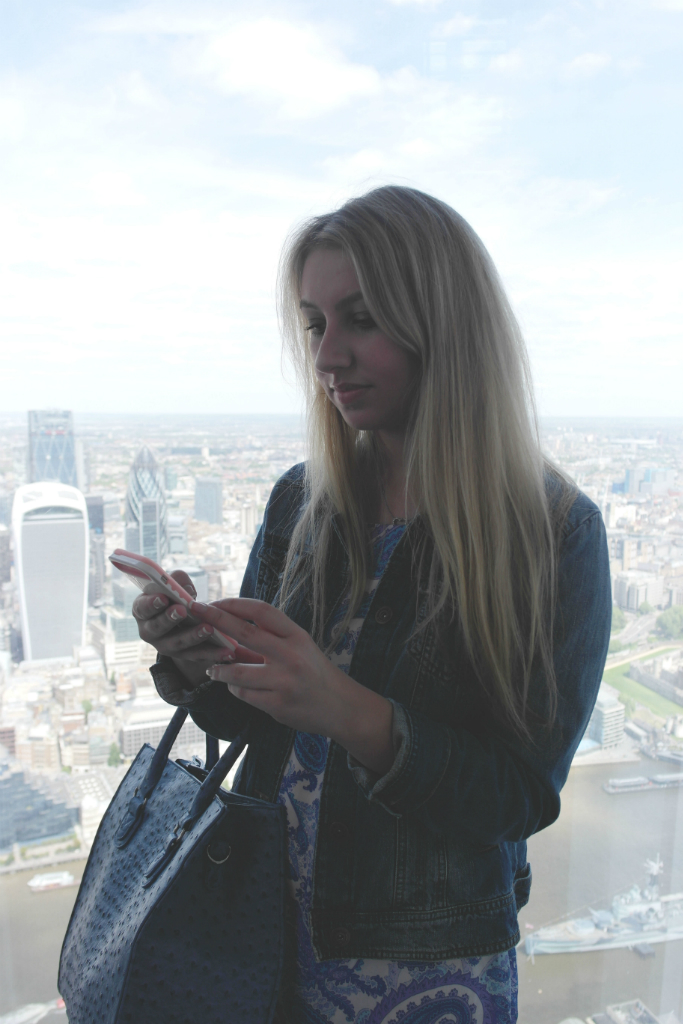 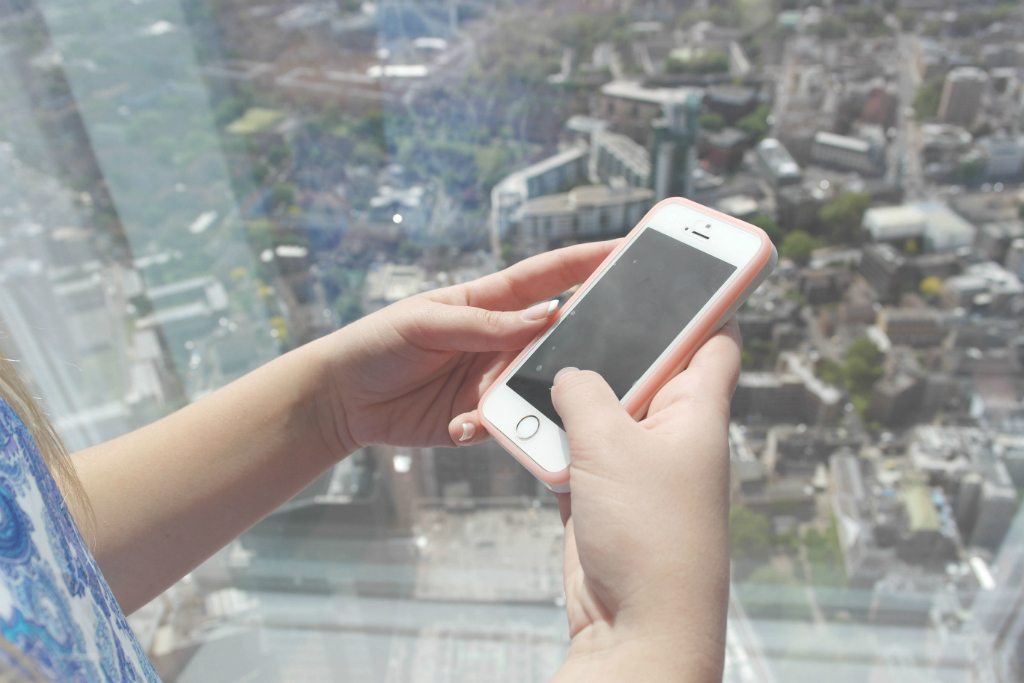 Yes, there’s even technology designed to help us IBS-ers! I’ve tried a couple out – paid for and free – and the most helpful by far is the IBS Relief Diary app. It’s a super easy way to track your symptoms, alongside keeping a food diary – carefully (and hopefully) pinpointing any possible triggers. It also helps monitor how stressed you are on a particular day, which you can record – getting an insight into whether that could be a trigger for you.

Anyway, that’s it for now (I’m sorry if I’m completely bored you to tears). I’ll be back very soon with whatever IBS updates I have next. I’ll be going through a bit of an ordeal in the next few weeks/months (all will be revealed when I’m ready), alongside moving house and trying to set up three more weeks of work experience, so it will be really interesting to see if my new managing techniques can withstand the test of stress!

Speak soon – and as always, if you have any recommendations or tips that helped you – I’d love for you to share them below. The loveliest thing about talking about my IBS, other than not having to feel like I’m hiding anymore, is having a community of you guys to chat to. I receive so many lovely emails on a weekly basis, with caring advice and comments, so please don’t ever feel shy about getting in touch!