London hosts an array of exciting activities and hidden haunts all year round. There’s cocktail clubs where you can dress up and pretend you’re in the 1920’s for a night, dine in the dark – relying on all of your senses (minus sight) to get you through the evening or even watch London from above sipping champagne in your own private London Eye pod. The opportunities are endless. In fact, hearing about what’s going on in the capital rarely surprises me anymore although I’m always intrigued to find out more.

One such activity was LG’s pop-up Underground Film Club (in The Vaults, underneath Waterloo station) which I was invited to last week. A six-week only stint, the club offers mini-golf, street food (waffles and ice-cream, nachos and loaded hot dogs – *insert heart eye emoji*) as well as two separate bars and a cinema. Sarah and I headed there for a night of food, cocktails-a-plenty and our one true festive favourite – Love Actually.

Just a short stroll from Waterloo, we arrived at The Vaults an hour and a half before our 8pm showing, eager to explore all that the club had to offer. Totally unassuming, we almost missed the entrance entirely (it really does feel like a secret underground club) until a doorman enquired if we were here for the cinema and so through we went. After getting our tickets from the box office, we walked through a (festive-foliage lined) illuminated archway and into a vast space which was laden with neon lights and filled with the smell of waffles. I figured whatever happened from then on, we’d have a pretty good evening. 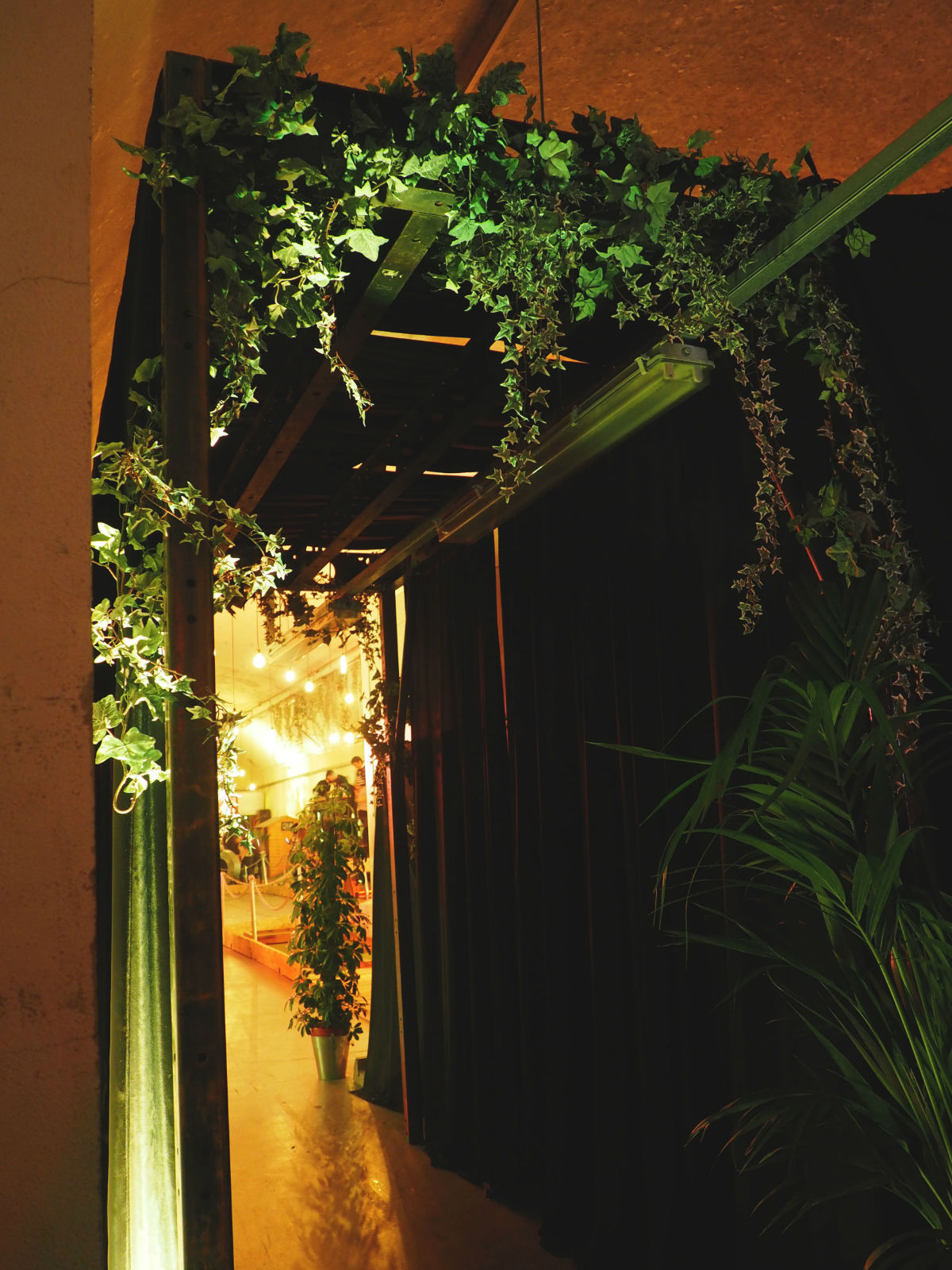 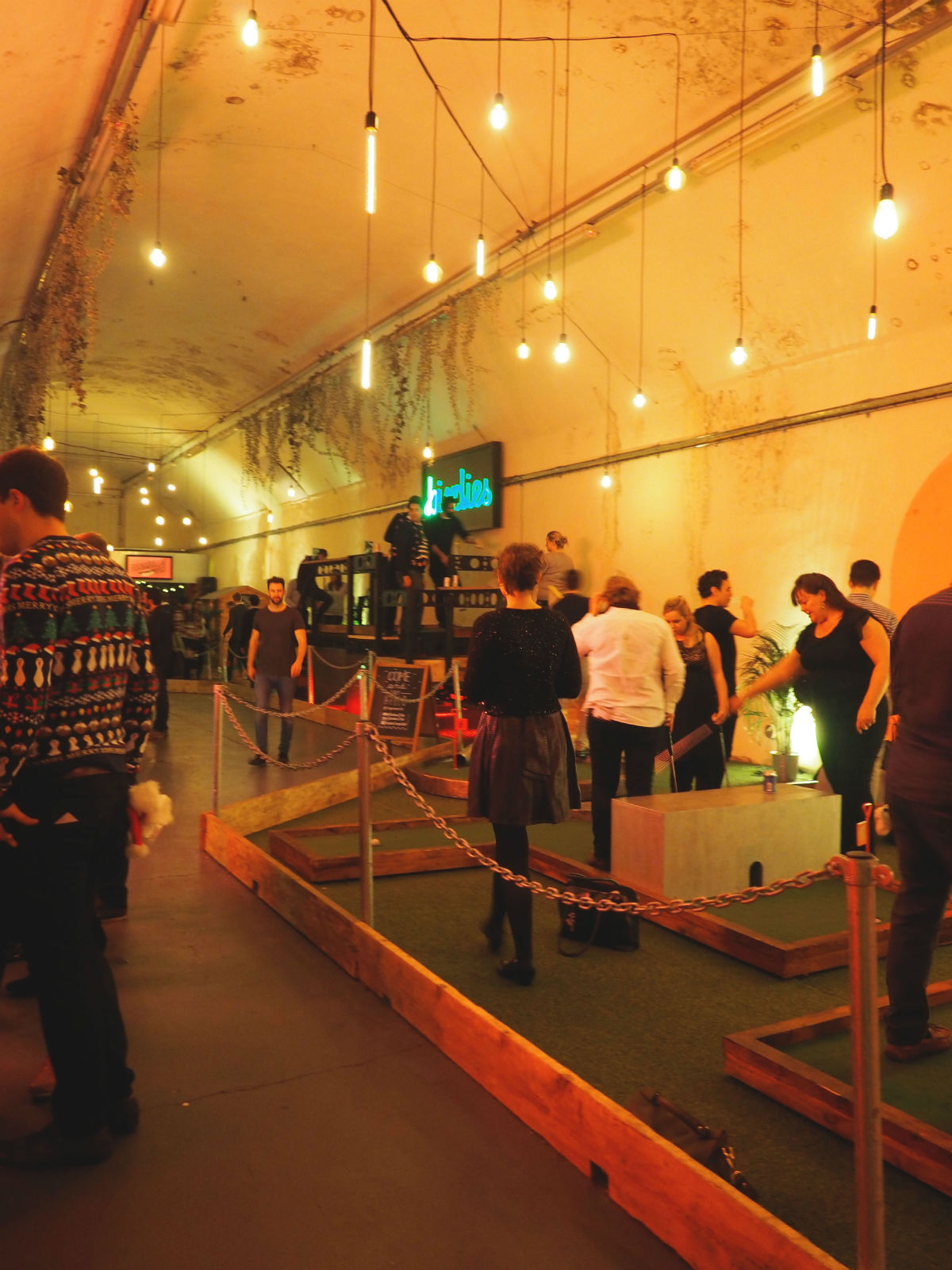 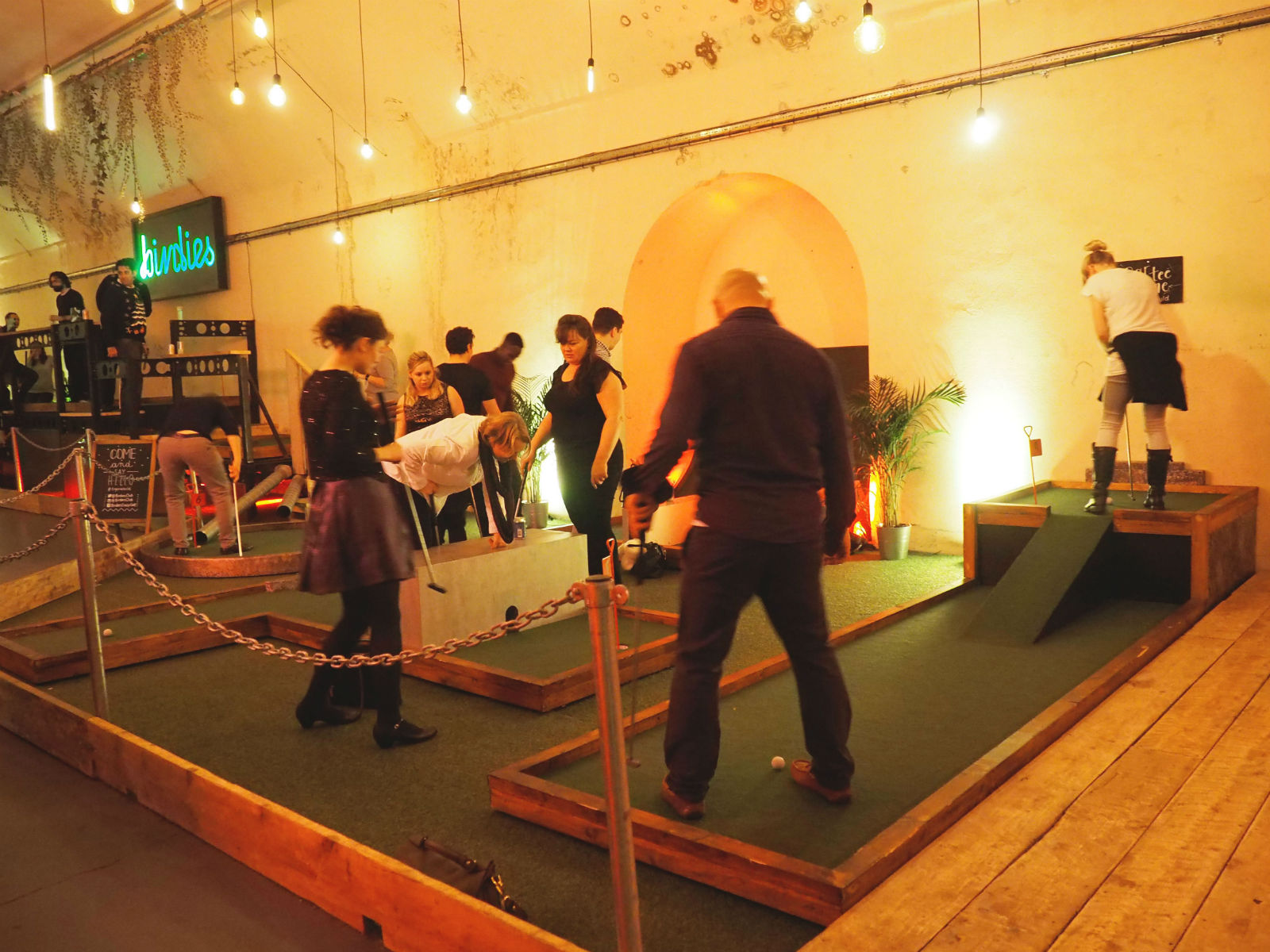 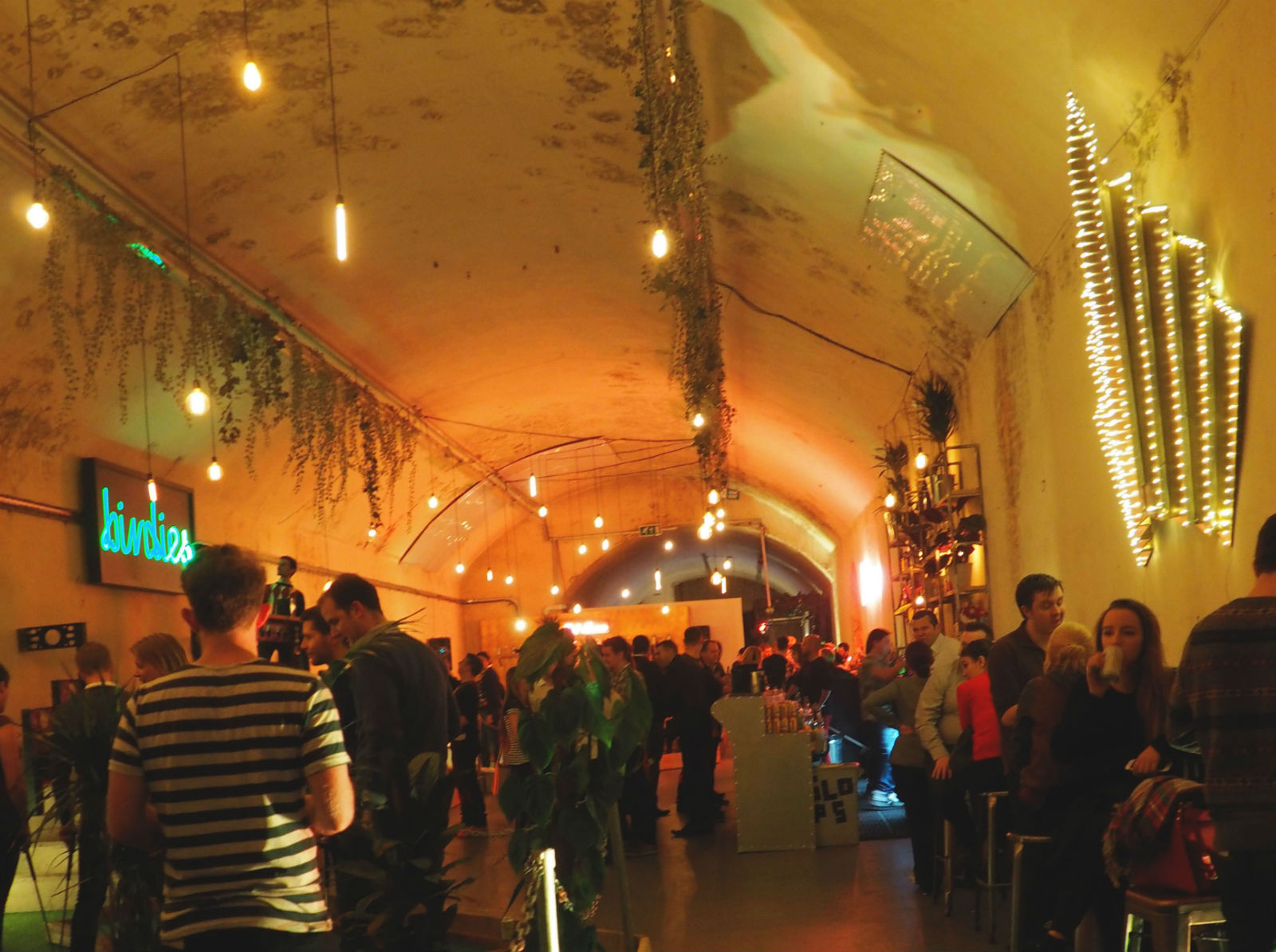 We grabbed a drink from the bar (cocktails created depending on our preferences) before heading on up to the private cinema, to stock up on popcorn (which I ate most of before the movie started – rookie error) before taking our seats.

Rather than just a plain black (slightly boring) cinema, the LG’s version was a much cosier affair, so much so that you felt like you were watching from the comfort of your own home – just with a far better quality screen. Crushed velvet cushioned seats were definitely something I could get used to in my local Odeon! 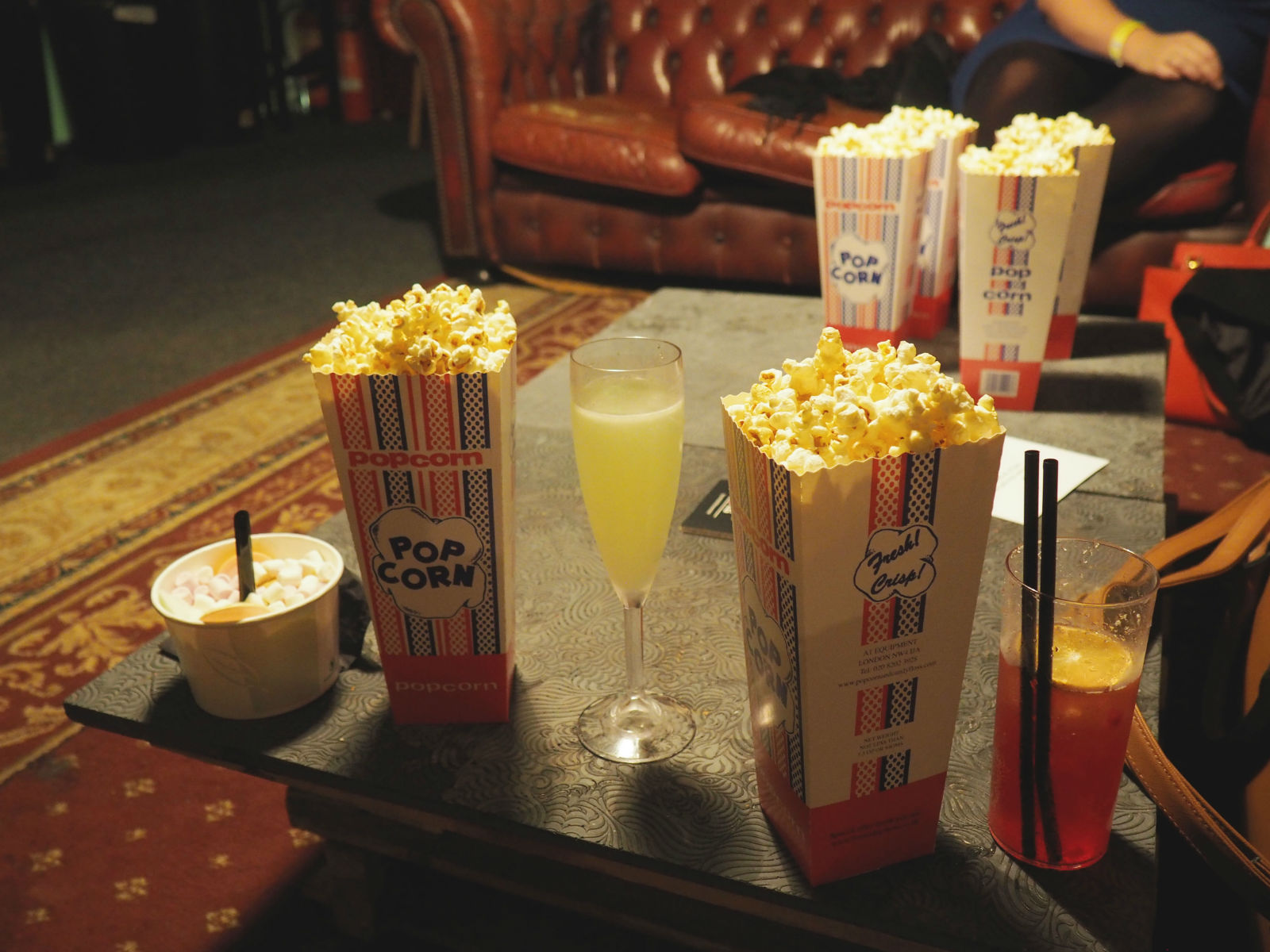 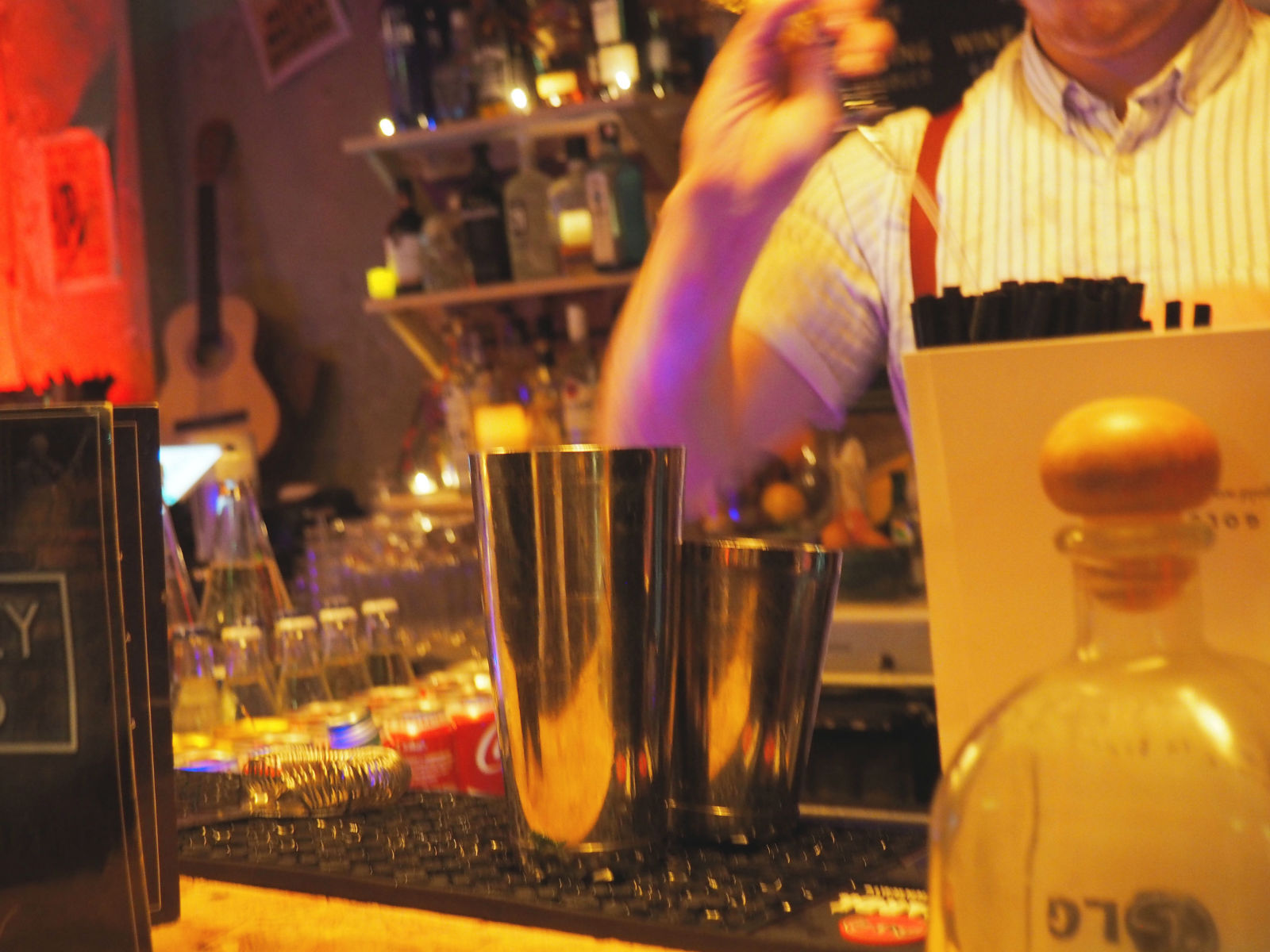 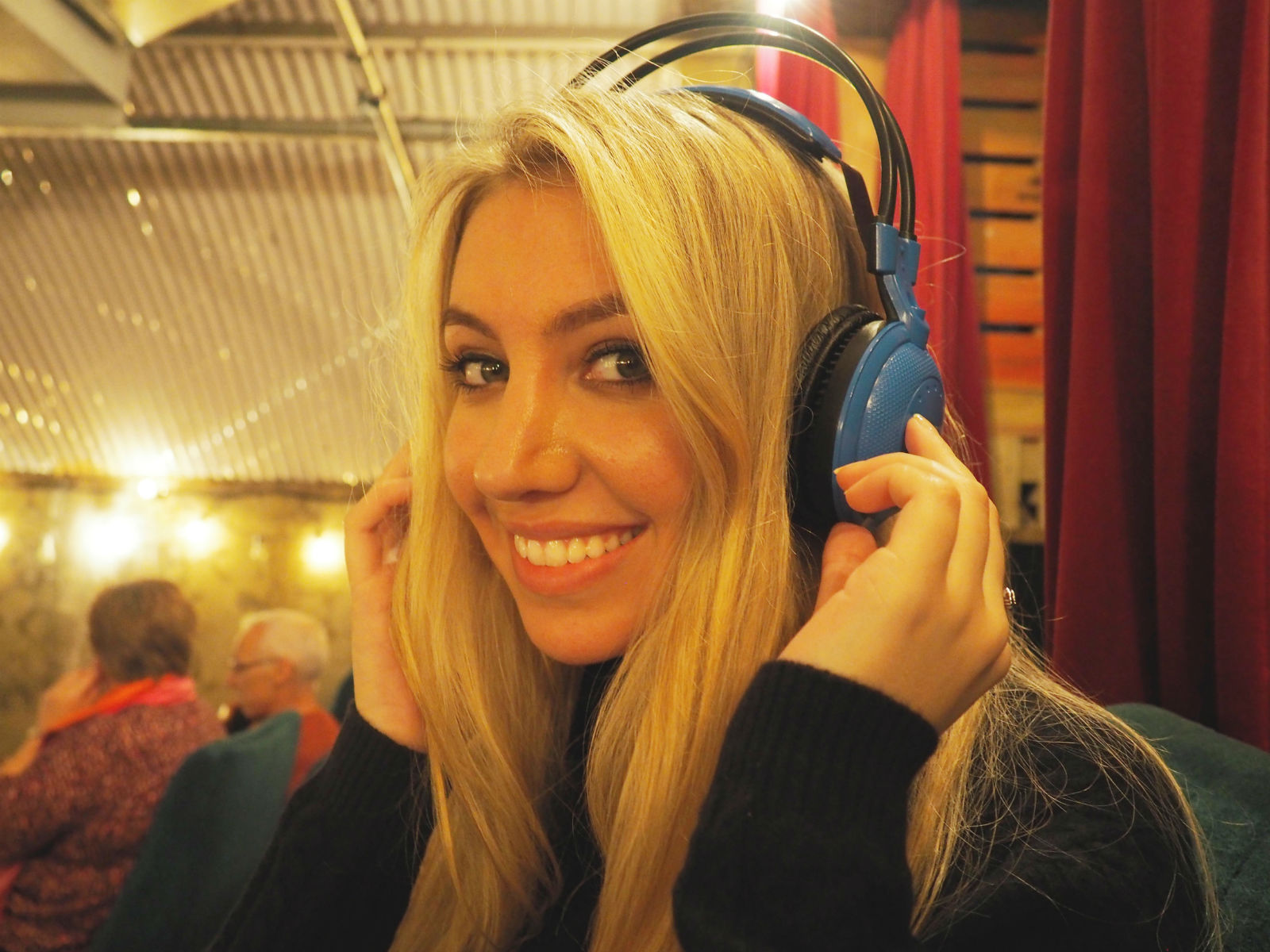 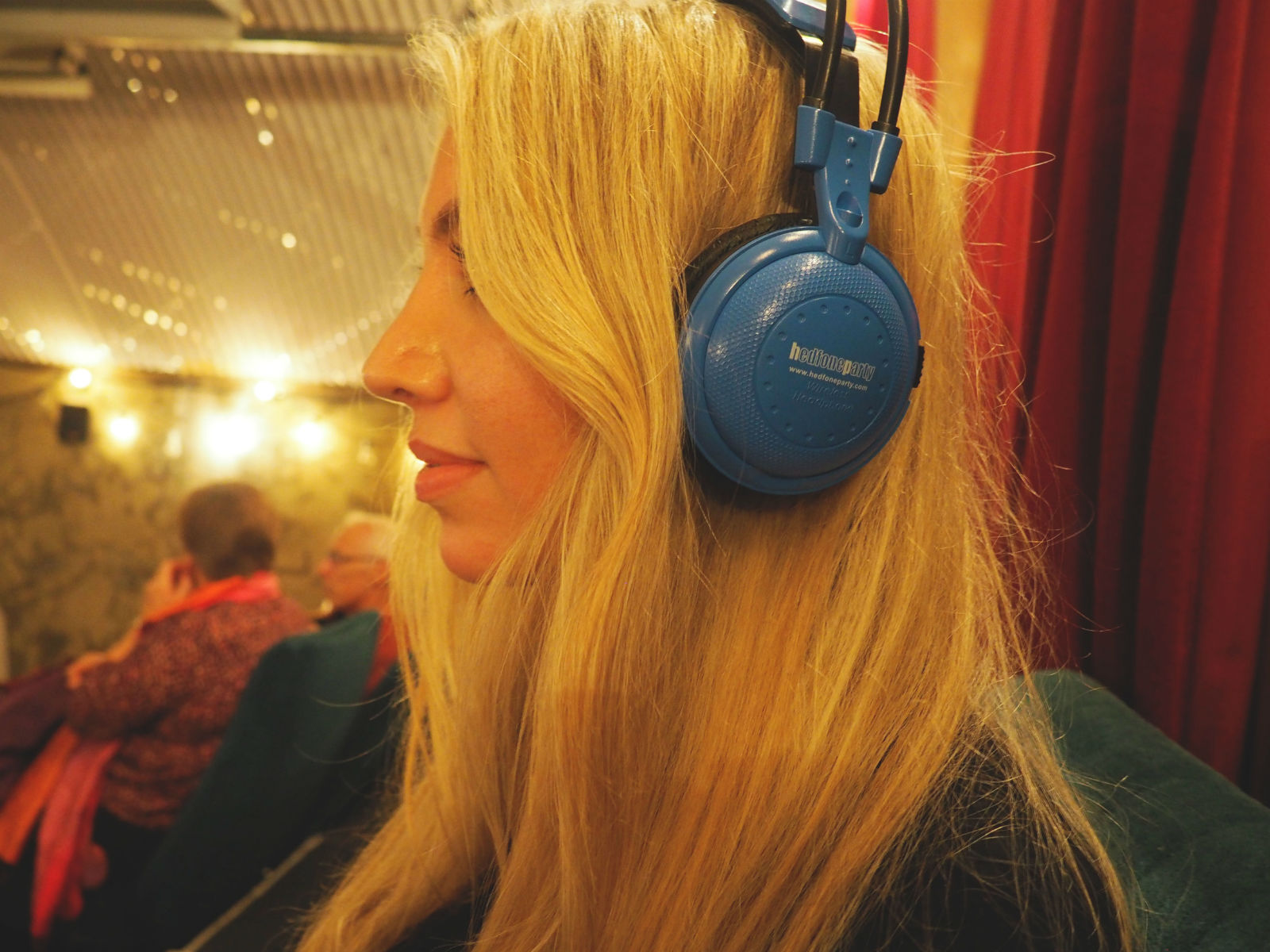 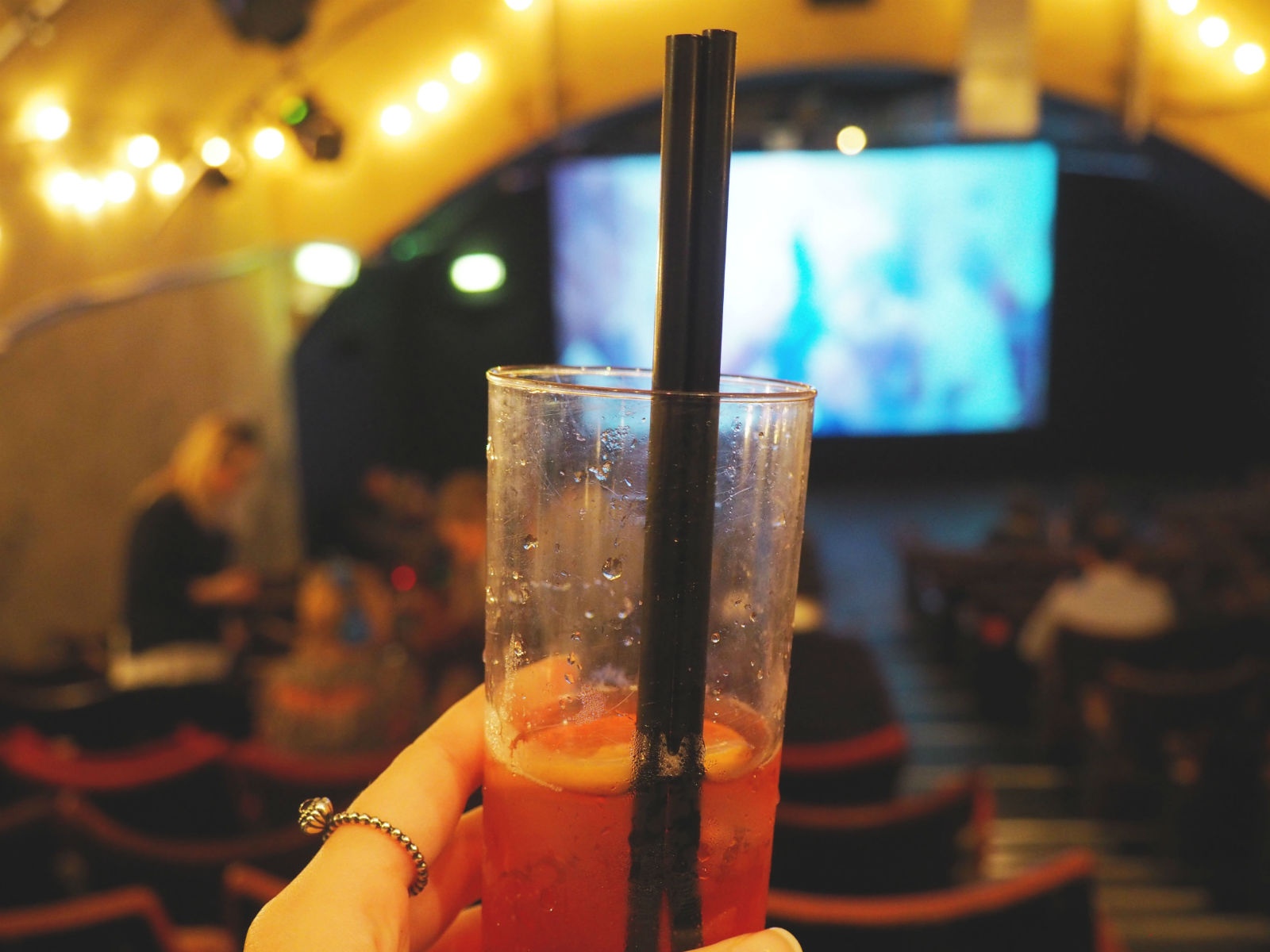 Since we were underground and could occasionally hear the trains going by above (which I couldn’t get my head around entirely), each cinema-goer was given a pair of headphones to watch the film with – which was actually another addition that I hadn’t experienced previously but that I think should be introduced in all cinemas across the country! You could turn the volume up or down depending on your preferences (sometimes the cinema is way too loud for me) and completely zone out and focus on the film. Rather hilariously, one side effect of the headphones was that if you took them off – you caught wind of others conversations – which they probably thought were quiet, but in actual fact – they were shouting!

The movie we saw was of course the one and only Love Actually, which is always a must-see for the festive season. I’ve watched it numerous times and always fall in love with it again each time for a different reason. It’s such a well produced and well written film (props to Richard Curtis) and the famous faces you see in each different scene is crazy!

Sarah and I left feeling very festive and returned home chatting about all the people we’d recognised and what they’d been in before. In the run up to Christmas I love planning nights out (that don’t necessarily involve clubbing and drinking – sorry to sound like an old woman) to get me in the festive spirit and this was certainly a great choice.

If you’re interested in seeing a film at the Underground Film Club in the run-up to Christmas, I’d book your tickets as soon as you can as they’re filling up pretty quickly. I know that Bridget Jones and The Holiday are on very soon – and it would make an alternative (but fab) festive treat for your best friend!

However, if you’re not London local but still fancy a piece of the action, you can enter LG’s competition to win a 49′ LED TV (which we previewed via the medium of ELF on the night itself – and the graphics are amazing) and a three month subscription to NOW TV.

To enter, all you have to do is tweet @LGUK a line from your favourite Christmas movie and include the hashtag #LGCapturingXmas.

Do you have a favourite Christmas film – or do you think the Underground Film Club would be up your street? 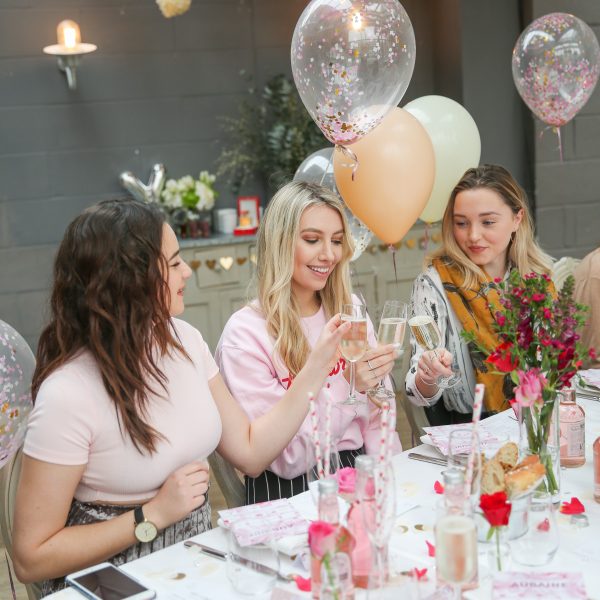 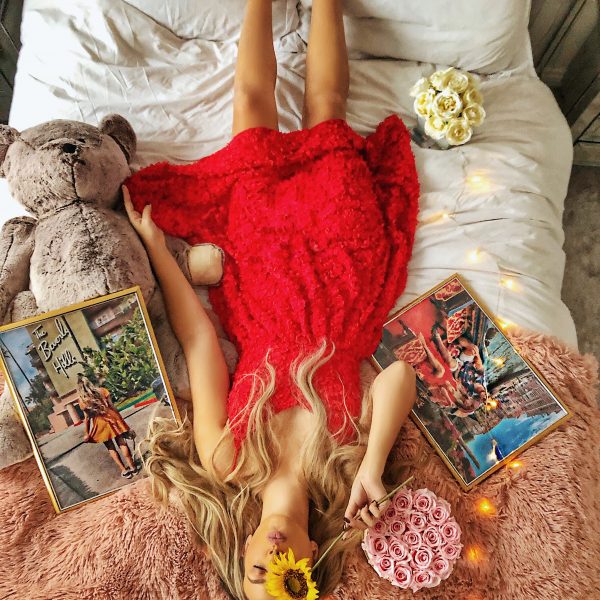 How to Jazz Up Your Breakfast 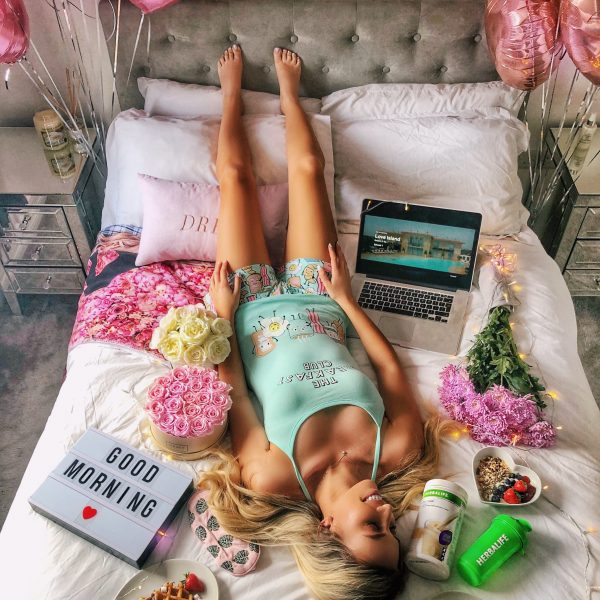